No, I haven’t broken the Z key on my keyboard, today’s game really is called Crazzy Clownz. Released in 2001 by Leisure and Allied Industries – a company name that just screams fun – Crazzy Clownz is a ticket-dispensing arcade machine featuring clownz of varying degrees of crazziness. Whether the extra Zs are supposed to denote heightened levels of craziness or a game so boring it’ll put you to sleep is yet to be revealed, although I’ve got a strong guess about which one of those is the case. Something that definitely won’t put you to sleep, and indeed may eliminate the very concept of sleep from your psyche, is the title screen. 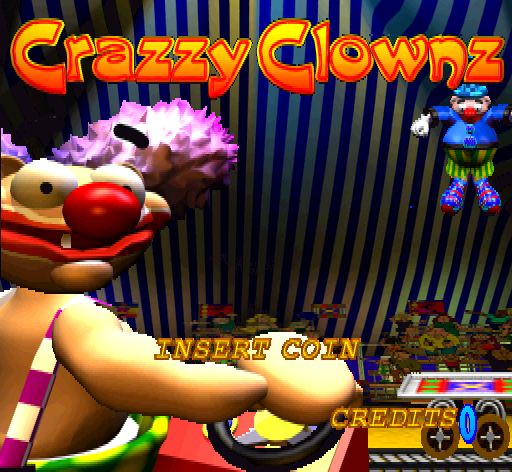 For pity’s sake, clown, you’ve got company. Put a shirt on or something. Notice that this clown has no eyelids, presumably having sliced them off with a razor so he can see all things at once, never resting for a moment. He looks bad enough as a still image, but just wait until you get a load of him in motion.

Dear Lord, that’s not pleasant. Someone sat down and made that, you know. Human effort was expended on its creation. Mankind has wrought some truly bizarre things during the course of history – the Sphinx, a financial crash based on tulips, the career of Jedward – and this clown is right up there with the most baffling. Why has he replaced his hair with a crystalline candy floss substitute? Why does he only have one tooth? Has he been eating his own rock-candy hair, and that’s why he’s only got one tooth? There are no answers to these questions, of course. Normally this is where I’d describe how sinister this clown is, but honestly he’s so ugly that I just feel sorry for him. That’s not to say there’s nothing sinister about Crazzy Clownz, mind you: I managed to find a sales brochure for the game and two of its selling points are listed as “design that attracts children” and “luring circus theme music,” so if you’re looking for a hook for your horror novel then there you go. 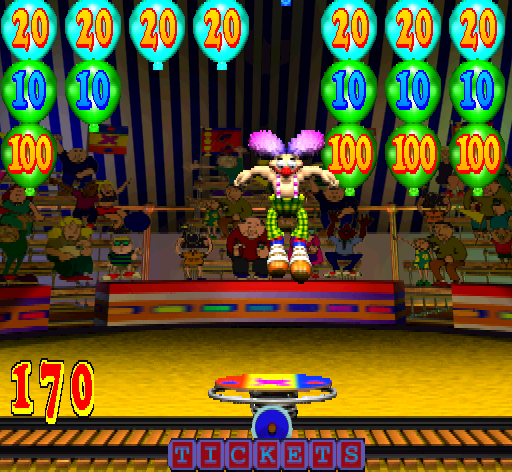 Here’s the gameplay. It’s your standard Breakout / Arkanoid clone with a circus twist: the bricks are balloons, the paddle is a trampoline and the ball is replaced by a shirtless clown in hideous trousers, a phrase that also works as my plan to make the sport of golf more interesting. The balloons have points on them, and the more points you get the more tickets the machine will give you at the end, because Crazzy Clownz is a redemption game. You know the kind, it gives you tickets that can then be exchanged for prizes if you take them to a small booth staffed by a bored teenager with a name like Ricky or Shannon. The gameplay is just about okay, in an ultra-basic kind of way, and you’ve got some degree of control over where the clown flies depending on which part of the trampoline he lands on. You don’t lose a life if the clown misses the trampoline or anything, you just lose a bit of time as you wait for him to recover from shattering his coccyx and climbing back into action. The most notable thing about the gameplay is that you control the trampoline with a physical steering wheel for no real reason that I can discern. If you told me the developers had a surplus of small steering wheels kicking around the office, I’d have no trouble believing you. 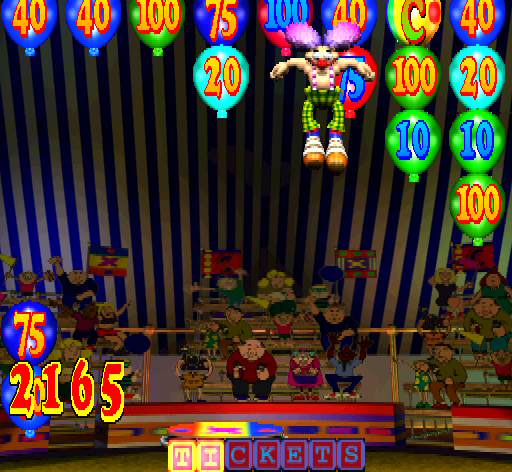 The only other thing to pay attention to are the special “TICKETS” balloons. Each one’s got a letter of the word “tickets” written on it, and if you collect all the letters you get a jackpot bonus and some extra tickets. I’m sorry I don’t have anything more interesting to say about this aspect of Crazzy Clownz. 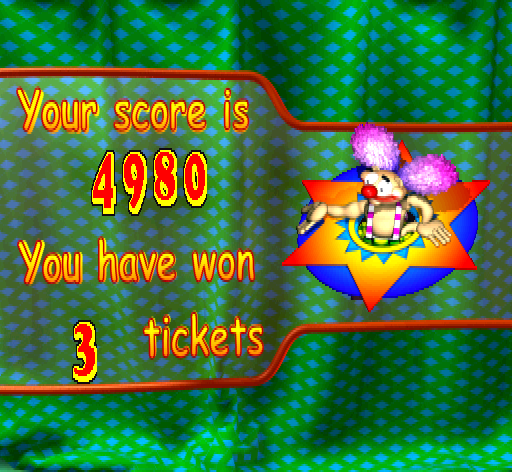 I thought I’d done okay, but my efforts (my efforts to stay awake, mostly) only netted me a measly three tickets. What the hell can I get with three tickets, beside a look of contempt from Ricky in the prize booth? One of those plastic moustaches that you clip to your septum in a manner that’s both uncomfortable and unhygienic? Half of a pencil eraser shaped like an ice cream? You know what, forget this – I’m going back in and I’m not coming out until I’ve collected all the “TICKETS” balloons and won the jackpot. 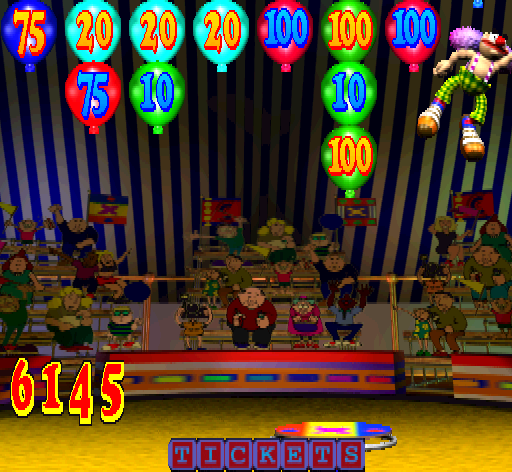 It turns out I had to cheat by giving myself some extra time in order to win the jackpot. Funnily enough, the final letter always seems to appear just as the timer runs out. There’s a random element to the placement of the letters and I’m sure it’s set up in such a way that every now and then they appear at a rate that allows you to collect them all, but I sure as hell wasn’t going to play Crazzy Clownz long enough for that mythical moment to roll around. Not because the gameplay is boring and unchanging, although it is, and not because I have better things to do with my time, because let’s be honest, I don’t, but because the game plays “Entrance of the Gladiators” on a constant loop even during the never-more-inaccurately-named attract mode. I could feel the music making me a worse person with every iteration. Any further exposure, and I’d have been finding out what happens when you forego “guilty” or “not guilty” and enter a plea of “clown music” during a murder trial. 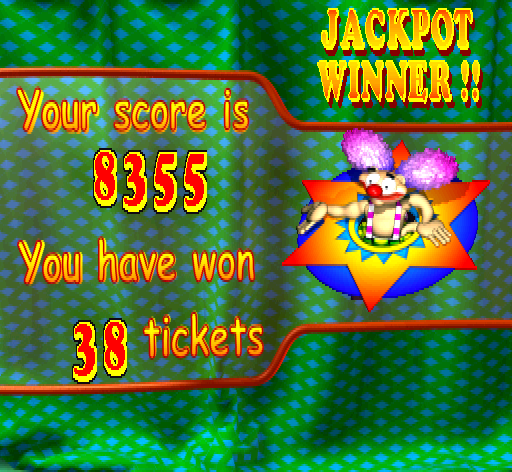 There, I won the jackpot. Now I can afford a light-up yo-yo that doesn’t light up or an oversized novelty pencil. I am satiated.
And there you have it, that’s the entirety of Crazzy Clownz. A mediocre Breakout knock-off with only one stage, a repellent coating of clownosity and the vague feeling that you’re being cheated while you’re playing it. Why did I even bother writing about it? It’s an equal mix between believing that all games should be remembered even if they’re ugly, joyless nonentities, a strange fascination with the not-really-videogames nature of redemption machines and the chance to say “look at this clown, he’s ugly as balls.” I’m sure I’ll write about a “proper” videogame next time, but I had fun delving into the existence of these crazzy clownz and sending my spellchecker into fits in the process. I did learn some things about Leisure and Allied Industries, the creators of this game: they’re based in south-east Asia and Australia, which explains why the clown in the game has an Australian accent. They operate a chain of family fun zone places, referred to on their website by the almost heart-stoppingly exciting title of “video amusement facilities,” called Timezone. They also put out another ticket game called Ripper Ribbit. I will never be playing that game, because it cannot possibly live up to my mental image of a cartoon frog stalking his victims through the foggy streets of Victorian London.


Recently on VGJUNK:
Deal or No Deal for the GBA. Yes, the game show with the boxes.

It's a bug hunt in Aliens for the C64!
Mike Haggar returns, cracks skulls in Final Fight 2!
Posted by VGJUNK