What's your all-time favourite videogame? Super Metroid? Metal Gear Solid? Sonic the Hedgehog 2? Well, you're wrong. Today's game is your favourite, you just don't know it yet. I know it's a bold claim but you won't be able to argue once you've seen Gardensoft's ZX Spectrum masterpiece Advanced Lawnmower Simulator in all it's blazing green glory. 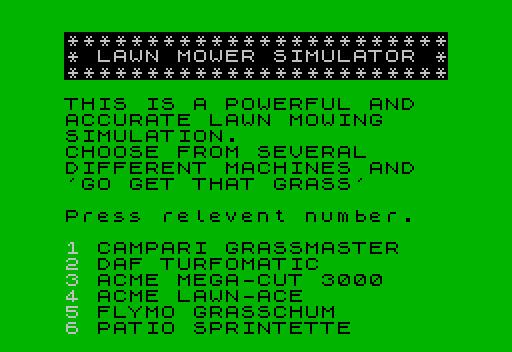 See? It's powerful and accurate, what more could you possibly want? Advanced Lawnmower Simulator perfectly encapsulates the immediacy of vintage gaming - no installation, no social media entanglements, you just pick a lawnmower and get down to business. Okay, sure, you have to wait for the game to load from an audio cassette, but that's just an excuse to go and make a cup of tea.
Lawnmowers, then. I think I'll go with the Acme Mega-Cut. "Mega-Cut" sounds like it could tackle even the most overgrown of lawns, and thanks to Wile E. Coyote I know Acme is a brand you can trust. 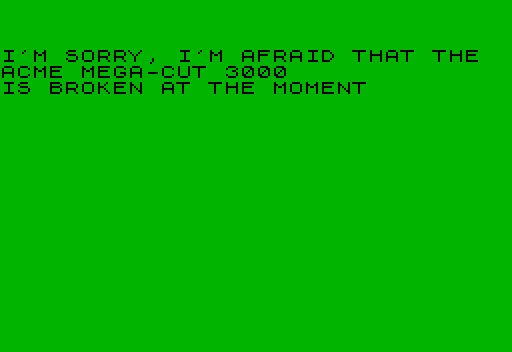 Bugger. I was looking forward to experiencing the effortless mowing power of the Mega-Cut for myself, but this is Advanced Lawnmower Simulator and not Advanced Lawnmower Repair Simulator, so I'll just have to pick another mower. How about the Flymo Grasschum? It seems like a good bet. My neighbour uses a Flymo mower, and his lawn is like a bowls pitch: immaculate, and often surrounded by old people. 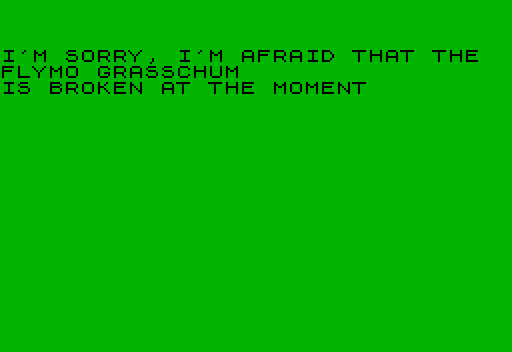 Here we see the importance of proper lawnmower maintenance, people. This terrible situation could have been avoided by regular checks and cleaning of these lawnmowers. It might seem like a lot of effort but surely it beats having to keep six mower around? 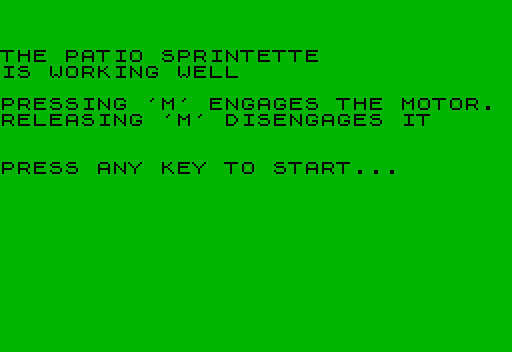 Luckily the Patio Sprintette is working well. It's a bloody good job, too, otherwise I would have been forced to chew my grass down to size like some bizarre hybrid of man and goat. God bless technology, then, and with the simple instructions memorised - press M to mow - filed neatly away in the ol' memory banks, I'm ready for some advanced lawnmowing simulation. 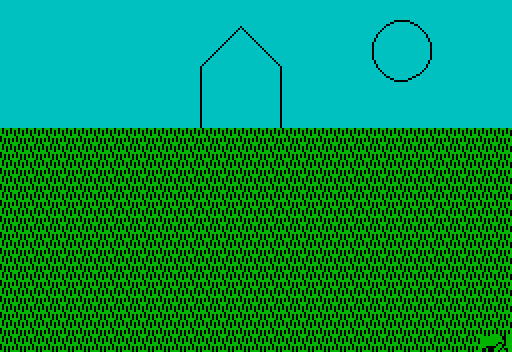 One man enters a field of overgrown grass. The skeletal shapes in the distance serve as an abstract expression of man's desire for warmth and shelter. To fulfil these needs, he must mow. Mow until there's nothing left and none can argue that this man did not leave his mark upon the Earth, even if that mark is nothing more extravagant than a well-manicured lawn. It will be no easy task, either: if we estimate this man to be six feet tall, then by my crude calculations he has around 15,600 square feet of grass to mow. Let's pray that my M key is up to the task.

Look at him go! A veritable dervish of lawncare, the unflinching blade that sweeps away all unwanted grass with the detached mien of the cruel gods of antiquity! Advanced Lawnmower Simulator offers all the pleasures of menial garden work with none of the drawbacks: no hayfever, no stopping every five minutes to empty the grass box, no sudden existential crises brought on by the sudden realisation that you're essentially giving your house a haircut. That's the power of computer technology, folks. That's the power of the future. 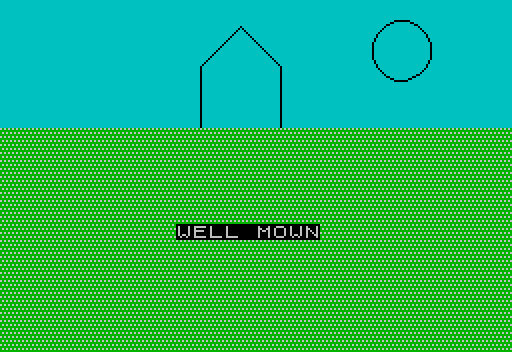 You're damn right it's well mown. It may not have been my first choice, but the Patio Sprintette was more than up to the task, and now my lawn is smooth enough that you could play a game of snooker on it if you were willing to dig six holes in it as stand-ins for the pockets.

Ugh, corned beef? That's right near the bottom of the Official VGJunk Sandwich Rankings, but I appreciate the gesture, and I'd better get it down me because I'll need the energy. There are always more vistas to explore, lands to conquer, lawns to mow. 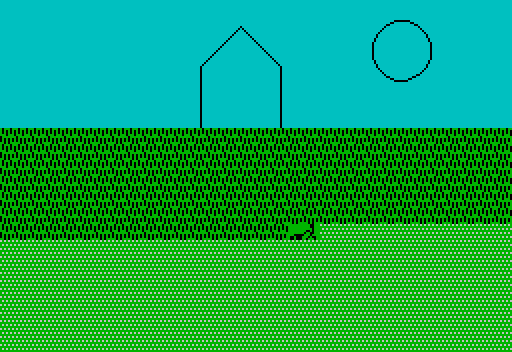 It's often said that one of the great joys of gaming is that it allows you to experience things you wouldn't normally be able to in real life: scoring the cup-winning goal, exploring the vast uncharted reaches of space, tearing your mortal enemy's head off with their spine still attached and dangling below like a jolly party streamer. The same is true of Advanced Lawnmower Simulator, as it allows me the otherwise impossible experience of mowing grass without my own body assaulting me through allergies and without a constant stream of complaints about having to perform manual labour spilling from my mouth.

Your cruel jibes cut me to the quick, Advanced Lawnmower Simulator, although a Helen Keller reference would possibly be lost on a younger audience. I would have gone with "who cut your lawn for you, Stevie Wonder?" but then I'm a fan of the classics.
I was so upset by this less-than-stellar review that I went straight back out there and did the job properly.

Much better. I won't have my lawnmowing abilities impugned by some faceless scrolling text. I am a master of the mower, a Leonardo da Vinci of lawncare, nothing can prevent me from creating the most immaculate lawns imaginable, I'm... hang on, what's this? 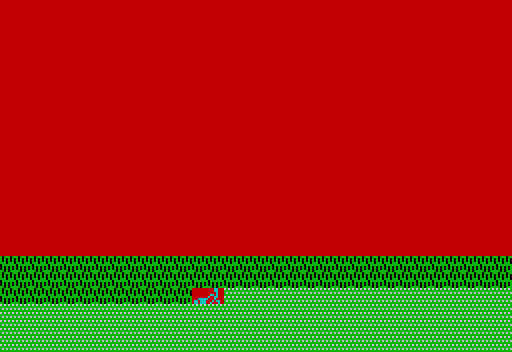 Oh god no, what is happening? Everything is washed away by the harsh red glare, nuclear war has finally come to claim us all and I wasted my life mowing lawns, oh, the humanity! 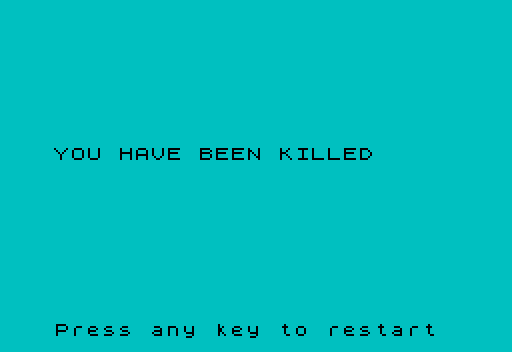 Mowing lawns: the most dangerous game. No cause of death is ever mentioned so it's up to the player to draw their own conclusions. Maybe my mower hit a rock, which flew up into my face and shattered my skull? Perhaps it was a sudden and catastrophic brain haemorrhage? Or maybe, just maybe, the little mower man spent so long isolated from human contact that his loneliness drove him to consider his Patio Sprintette as a, ahem, romantic partner. The paramedics who found him still use the story of his mangled crotch to frighten new recruits. That, then, is the true and powerful lesson that Advanced Lawnmower Simulator subtly tries to teach us: don't waste your time mowing lawns, or you will die. 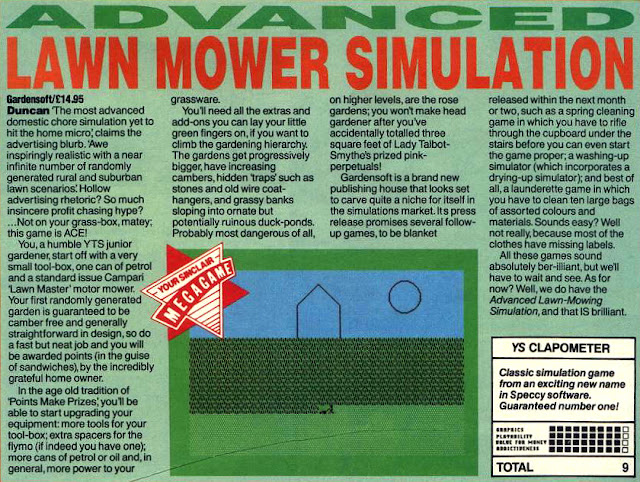 I'm sure most of the other cleaning games mentioned here probably exist as indie games now, so Duncan McDonald displayed incredible foresight there, and I have to confess I'd be intrigued to play the spring-cleaning game. Anyway, Advanced Lawnmower Simulator was released the following month on Your Sinclair's cover tape, giving Spectrum owners the world over the chance to explore the wonders of gardening, working in the great outdoors and wearing out your M key. Naturally, Advanced Lawnmower Simulator became something of a cult favourite, spawning "sequels" and more remakes than the Final Fantasy series and honestly? I kind of love it, because it's just so wonderfully stupid and hey, it's still more fun than almost all the Game Boy Color games I've ever written about.