It's time for another Ephemera article, where I pick out five small fragments of gaming fluff that amuse or intrigue me and give them more attention than they probably deserve. Let's get right to it, shall we? 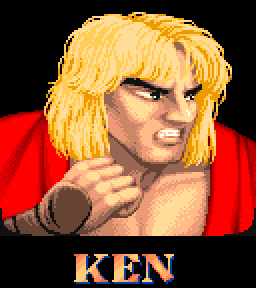 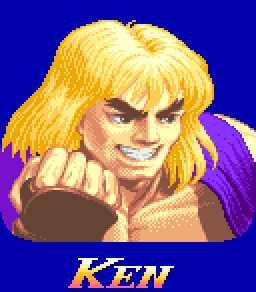 By the time Super Street Fighter II rolls around, Ken has a new portrait portrait that show a distinctly more jovial side of his character, a beaming smile plastered across his face. Why is Ken so happy now? Maybe he's really pleased with the results of his trip to the barbers, where he asked the stylist to give him a He-Man hairdo. Perhaps he's excited because he can now punch so hard that his hand catches fire. Another explanation is that after the first tournament, where he fought stretchy Indian men and sumo wrestlers, he has come to the realisation that this Street Fighting lark isn't quite as serious as he thought it was going to be.

Then we get to the SNES port of Super Street Fighter II, and the transition to sixteen bits has given Ken's expression a subtly different cast. The narrowing of his eyes and the different angle of his lush black eyebrows has changed his mood from simple excitement to a psychotic desire to hurt others, his once-winsome smile replaced with a grimace that says to the viewer "I want to punch someone right now," and he doesn't much care who his victim is. Street Fighting can take a terrible toll on a person's psyche, which explains why Guile chose that hairdo.

From one ridiculously-muscled blonde American to another, here's Duke Nukem. 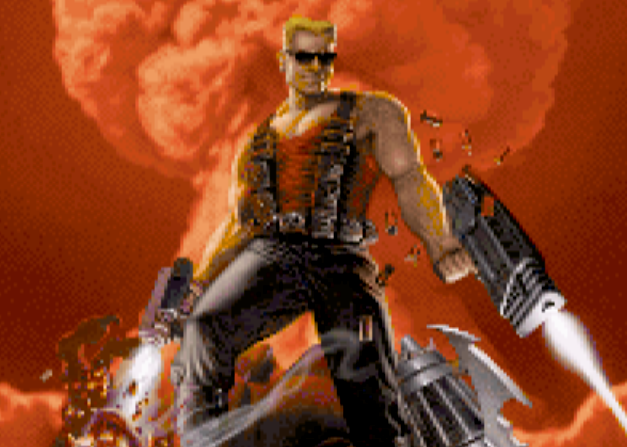 Duke's a man of action and not much of a deep thinker - watching all those eighties action movies so he could steal one-liners from them took up a lot of time that could have otherwise been used for intellectual self-betterment. He also takes a lot of steroids. Still, I think giving him these buttons to push in Duke Nukem 3D was a bit on the nose.

Just look at those things - so chunky and childlike that pressing them is at once strangely pleasing and faintly patronising. They're Fisher-Price buttons, buttons straight off a kid's toy. I half-expect a soothing female voice to say "A is for apple" or something whenever I activate them. Of course, this is Duke Nukem 3D so what generally happens when you push them is that something explodes and Duke repeats a line from an Evil Dead movie.

Final Fight 3 is a side-scrolling beat-em-up in the traditional mould, where brave heroes and elected city officials take to the mean streets to beat up a huge criminal gang, one thug at a time. Most of the bad guys are the usual fare, punks in sleeveless jackets with names like Billy and Ray. Then these weirdos start showing up. 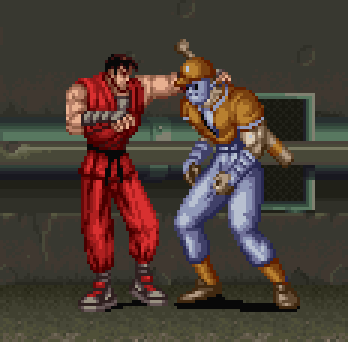 This is Hunter, a baseball player wearing a hockey mask, and I think that's a fashion choice borne more from a desire to look like Jason Voorhees than the expectation that a hockey game will suddenly break out. I just think Hunter is a really neat bit of character design, especially as it comes after mostly fighting enemies that are "normal," as street punks go. I mean, you can construct a mental picture to explain why the likes of Billy and Ray are in this gang - young, deprived men from the wrong side of the tracks who are lured in by the camaraderie and potential financial gain that gang membership could bring. Then you see Hunter, and you start to wonder what his deal is. He likes baseball, that much is obvious, but I guess he likes clobbering people more than scoring home runs, and that's why he's lurking in back-alleys and not in the batting cages. Maybe it's another Splatterhouse-inspired case of a man being driven to violence by a haunted hockey mask, or he recently watched The Warriors and he was impressed by the cut of the baseball-themed gang's jib. Yeah, it's definitely that last one. He saw The Warriors and then came to work the next day trying to convince his fellow gang members that they should have a unified theme, like baseball players. It didn't work, obviously. That's why Guy is consoling Hunter in the screenshot above, a friendly arm around his shoulder as he says "don't worry, Hunter, you can start your own gang, and me and Haggar will beat you up, I promise." 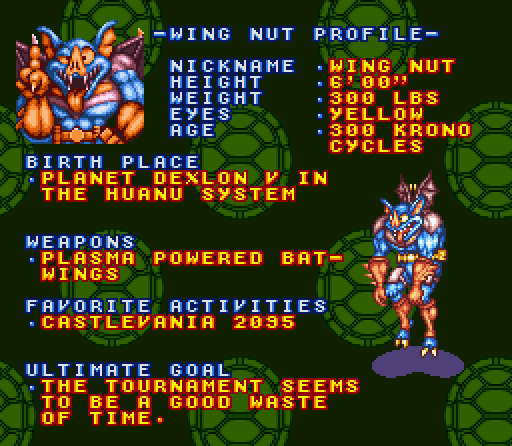 His favourite activity is Castlevania 2095, appropriately enough for a man-bat. Ever since I saw this as a kid I've been wondering about what Castlevania 2095 would be like. My original theories were that it's a Castlevania game set in space with lasers and Cyber-Dracula and what have you, or it's a TV series in the vein of Beverly Hills 90210. Now that I'm older and a little wiser, it's clear that this is a glimpse into a distant future where the trend for rebooting franchises and giving them the same name as the original has continued. That should actually read "Castlevania (2095)," the Ultra-HD remake of the original game for the PlayStation 74. 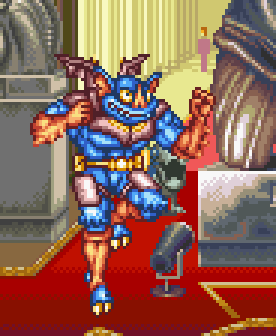 You know what, I'm going to expand this one to include Wingnut in general. How the hell did he end up in a TMNT videogame at all, never mind appearing in a fighting game ahead of Bebop, Rocksteady, Baxter Stockman and Casey Jones? He was in one episode of the original cartoon series and some spin-off comics, it's like making a Marvel comics fighting game and including Shuma-Gorath instead of Cyclops. Oh, right. Anyway, the staff at Konami obviously saw Wingnut somewhere along the line and thought "yes, a deranged mutant bat who dresses a little bit like Batman and who no-one has ever heard of, that's the character we want in our game." Good on them, I say, because Wingnut is pretty great, with his big, adorable grin and his lack of interest in the actual fighting tournament, and he deserves his brief moment in the spotlight. 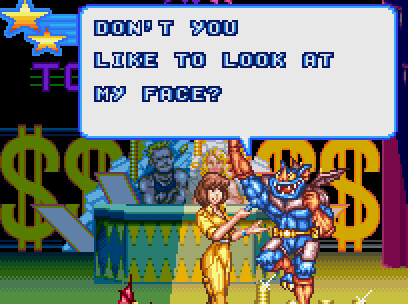 
James and the Giant Chainsaw

In Silent Hill 2, one of the bonuses for completing the game is the chance to collect and wield a chainsaw on your second playthrough. Having a chainsaw in any monster-slaying situation usually works out pretty well - just ask Bruce Campbell - but sadly the chainsaw in Silent Hill 2 is a little too cumbersome to be truly effective and you're probably better off just whacking things with a metal pipe. The chainsaw does have a couple of features worth noting, though.

One is that if you stand around for a while with the chainsaw equipped, James will occasionally lift it over his head and bellow like a maniac. Now, this never happened to me when I was first playing Silent Hill 2, because I was always too nervous of impending psychological demon attacks to stand still, but can you imagine if that happened after you'd, say, set the pad down to make a sandwich? That'd be terrifying, as well as providing a clue that James may not be in the best mental health (or at least it would if you didn't have to complete the game to unlock the chainsaw).
The other thing about the chainsaw is really impossible to see under normal gameplay conditions, but I lead such an exciting life that I spent some time looking through all the textures in the game. Would you like to see that chainsaw's texture? 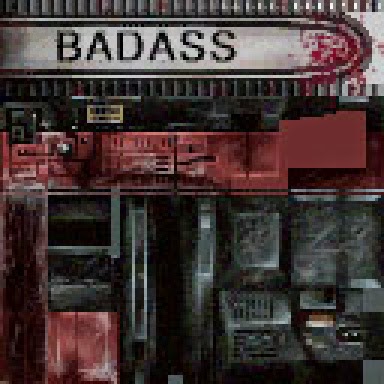 That's right, the chainsaw has "BADASS" written along the blade. I have to assume that's an after-market modification applied by James himself. I don't think chainsaws come out of the box like that, having the word BADASS on the blade is just going to encourage people to get up to chainsaw mischief, the second-most dangerous kind of mischief (after clown mischief). It's wildly inappropriate for the mood of the game, but then that's one of the great things about the Silent Hill series - they've got just a touch of comedy to them, like the UFO endings and Heather's reluctance to stick her hand down a filthy toilet - and it works beautifully in contrast to the overall grimness of the franchise.
As a bonus, poking around in the textures also provided me with confirmation of the names of a couple of businesses in the town of Silent Hill.

There's a record shop called "I Love Groovy Music," for one thing. What a great name, it's so inclusive - who doesn't like groovy music? That town from Footloose? Exactly.

Then there's a business called Magical Envelopes. I have long wondered what the hell it could possibly be about these envelopes that makes them magical: I know this is Silent Hill, but I don't think the cult's insidious influence extends to granting dark powers to common stationery. The mystery only deepened when I saw the Fashion Envelopes banner, because the idea of a fashionable envelope is one that my brain is not equipped to handle. Maybe it's a command, "fashion envelopes from the paper and glue provided, fill this box with the envelopes you have fashioned, if you see the Red Triangle Thing please report it to your supervisor". That's industry in Silent Hill, folks - the tourist trade, drug trafficking and the best damn envelopes you ever saw.