It's time for another sprite history here at VGJunk, and once more I'm delving into the pixellated history of a comic book hero. Today it's the turn of super-soldier and flaxen-haired champion of justice Captain America. You know, I was never a big fan of Cap when I was a kid, but I've come around to him in recent years. It might be down to his appearances in Marvel's blockbuster movies, but I think it's more that I've lost some of the cynicism of my youth. I mean, I'm still dreadfully cynical but mostly in regards to politics and big business and humanity in general and not when it comes to one-dimensional ultra-patriotic Punching Man from those Punching Man Comic Books.
Anyway, Captain America - he hasn't appeared in nearly as many games as some of the other Marvel heroes, but he's got a few titles under his star-spangled belt. Well, he's mostly got one game repeated several times, but we'll get to that. First, to the home computers of the late 1980s! 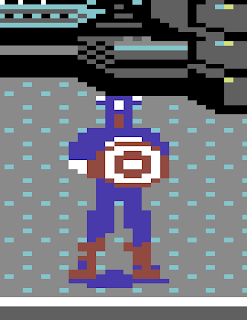 Christ, what a title. The "doomtube" sounds like a really douchey euphemism for something so unpleasant I haven't thought of it yet, and it's from this cylinder of peril that Captain America must escape. It's Cap's first ever videogame appearance, and how does he look? Well, not too bad, given the limited power of the Commodore 64. He seems a little hesitant, hiding behind something that looks more like an inflatable haemorrhoid pillow than his famous shield, but the artist on this one has pulled off a subtle and cunning piece of pixel trickery. Look at Cap's head. It's blocky, right? Like a housebrick preparing for a Fourth of July parade? Take a closer look, however, and you'll notice that the blue areas are in a specific shape. The shape of a letter A. For America.


Captain America in: The Doomtube of Dr. Megalomann, Amstrad CPC, 1987 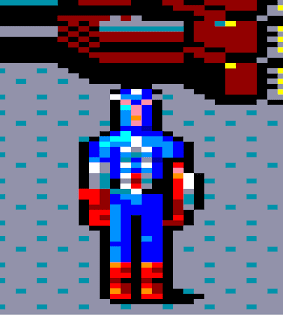 This isn't the case in the Amstrad version of the same game, where the pink flesh of Cap's face is clearly spelling out the letter Y. That Y stands for "You'd better not question Cap's loyalty to America," of course. In fact, he's such a model soldier that he's remained standing to attention long after his mission briefing is over. It's either that or we're actually looking at a carved wooden replica of the Captain. 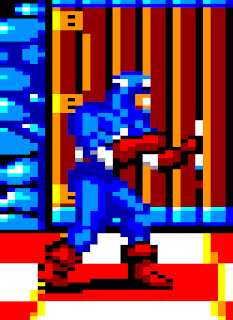 A couple of years later and Cap's looking much better, with a more fluid stance and a great big smile on his face. He's smiling because he's thinking about America. Or about punching a Nazi. Many Nazis. All the Nazis. After that he's going to freeze himself in the waters of the Arctic until there are more Nazis to punch. Cap's not a complicated guy. 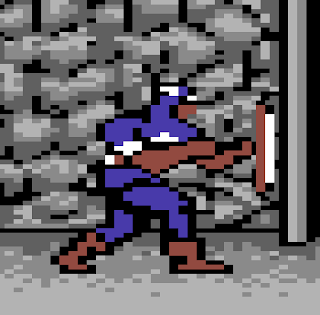 I gotta admit, Dr. Doom's revenge is more likely to come to fruition in the C64 version of the game, because how is Cap supposed to halt Doom's evil machinations when his hands have been replaced by traffic cones? It's all very good striding purposefully into battle, but what are you going to do once you get there? You don't have any thumbs so throwing your shield is right out. You'll just have to stab them with your cone-flippers. Will a man who represents the very pinnacle of human strength and fitness be able to ram a traffic cone right through someone's ribcage? I don't know, but I'm sure some Nazi's about to find out.


Captain America and the Avengers, Arcade, 1991 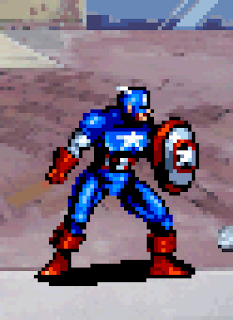 Aww, wook at dat widdle button nose! Steve Rogers, you are just darling. The strange proportions of his head aside - there's a rather high ration of forehead to chin here - this sprite from Data East's arcade brawler does its job well enough. My only problem with it is that Cap looks a bit... sleazy. It's the narrow eyes, the faint suggestion of a five o'clock shadow, the feeling that maybe this Captain America fights for truth, justice and the chance to occasionally harass small business owners as part of a minor protection racket.


Captain America and the Avengers, SNES, 1993 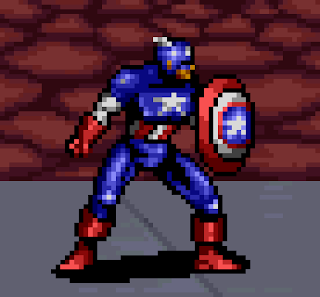 I hope you like Cap's look in Captain America and the Avengers, because that game was ported to pretty much every system going at the time. Nothing much has changed in his SNES incarnation except his suit's a little darker. Well, it's bound to get grubby, what with all the avenging he does. Anyway, congratulations to the team who handled the arcade-to-SNES conversion. You've done a good job there. 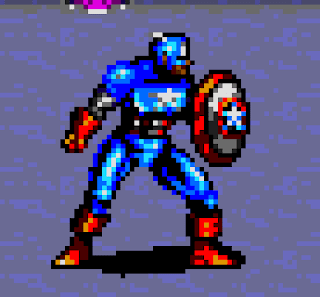 Things went the other way in the Megadrive port, and now Captain America has a little more "electric" in his red, white and blue. It puts me in mind of an action figure that's been repainted and given a new name to match its new colour, like a Batman painted white who's now "Arctic Assault" Batman, or the red-and-green "Festive Edition" Spider-Man with Yule Log Accessory. Shock Storm Captain America, let's say. He can punch electricity now, or at least deflect it with his shield.
If you were feeling particularly generous, you could point out that the usually white parts of Cap's costume - the midriff and the arms, mostly - are now grey and that makes Cap look a bit like a cyborg. I'm hardly a Captain America expert, but I'm going to state with some confidence that there must have been a cyborg Captain America at some point in the comics. 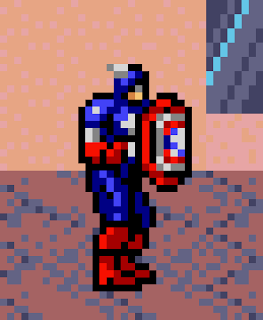 It's a shy Cap, a Cap lacking in confidence, a Cap on his first day of school. It's the way his feet are pressed together, he looks like he's being scolded. Speaking of his feet, Captain America has weird shoes. I know that to mock what superheroes wear is to leap into a bottomless cavern of capes, under-arm webbing and neverending garlands of pointless pouches, but Captain America's footware seems especially strange - they're oversize pirate boots with a big floppy collar that even Jack Sparrow would find a bit ostentatious - except in this game, where they're high-heeled kinky boots. I would point out that they can't possibly be comfortable for fighting crime in, but then neither would wearing your underpants on the outside and Superman seems to manage all right.


Captain America and the Avengers, NES, 1991 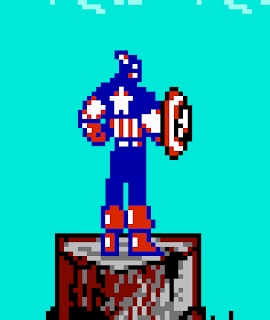 The NES version of CAatA is completely different game than all the others that share the name, with more of a platforming focus and less throwing exploding coke cans at bad guys. It's also got one of my favourite Captain America sprites. Heroic, poised, stoically surveying the scene while dramatically perched atop a tree stump - even his extremely boxy head can't take away from its majesty. Bit rude for him to have his back to the player, mind you. 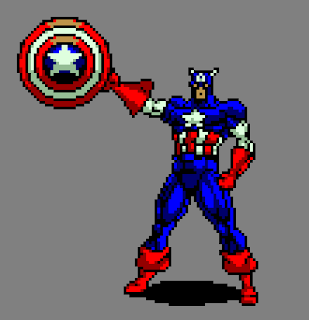 Cap appears as an assist character in the web-crawling brawler, and judging by his facial expression he's really surprised to be there. Your eyes might be draw to his bulbous shoulders or the thighs that look as though they could be put to good use as a junkyard car crusher if the heroism business dries up, but I'm more interested in why his glove appears to have a fin attached to it. I didn't miss something, did I? Cap can't... fly, right? I mean, I know he's got wings on his head but I assumed they were for decoration because they're surely to small for powered flight. Maybe the fin just makes his punches more accurate. Yeah, let's go with that.
Oh, and because I have certain standards of immaturity to maintain, it'd be remiss of me to not show you the animation frame directly preceding this one. 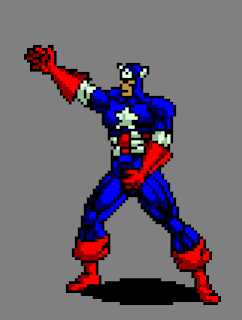 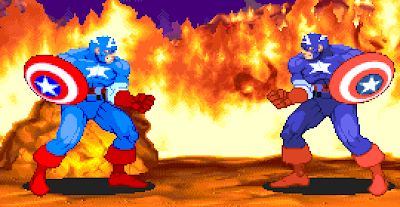 I know I say it every time I do one of these articles, but Capcom's crossover fighting games always end up featuring the best-looking representations of the Marvel stable. True to their comic-book roots but infused with Capcom's own style, they burst out of the screen with character and colour. No jokes for this one, just Cap looking better than ever. 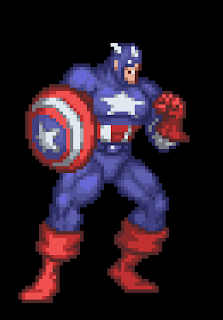 He also looks pretty good in Capcom's SNES title. I don't know if it's his very pronounced brow or the fact that he looks like he's missing a tooth, but this seems to me like a more rough-and-tumble Captain America, a version of Steve Rogers for whom the defence of the American Way is merely a happy side-effect of smashing people's heads in with his indestructible shield. If they made a movie starring this version of Captain America, he would be played by Vinnie Jones. Vinnie Jones attempting a soul-gratingly terrible American accent. Imagine him grabbing Iron Man just before the climactic battle and telling him to "get stuck in you fackin' slag." 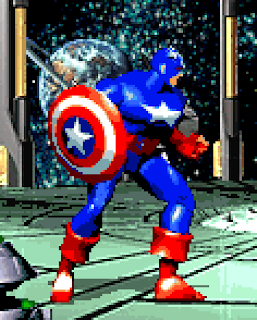 The final game featured today is probably the most obscure of the lot - Avengers in Galactic Storm is a one-on-one fighter by Data East that stars such Marvel heavyweights as Captain America and, um, Thunderstrike? And Crystal? Look, all we need to know for the purposes of this article is that it's got Captain America in it, and boy is he shiny. On several occasions I've voiced my opinion that digitised graphics looked bad in the Nineties and look even worse now, but honestly I think Cap comes out of this fairly well. He might look like a Limited Edition Inflatable Captain America Pool Toy and Bop Bag, but he's well-proportioned and his shield's looking good. Good work, Data East. You successfully mastered digitised graphics just as polygonal games came along and made them redundant. This game was released in the same year as Tekken 2. Yeah.

There you go, then, Captain America through the ages, if you can consider the nine-year span between 1987 and 96 to be an age. If I had any idea how to run a successful website, I would have timed this article to coincide with the release of the next Captain America movie. Oops.