It only rained on two days last week and the ambient temperature has risen to a point where my CyboRazer GX Blogmaster Typing Gauntlets have become uncomfortably sweaty, so I guess that means the British Summer Is Officially Here. Don't worry, I've switched to the more lightweight and heat-dispersing PowerSlash 4500 Keyboard Mittens with OptiCool Technology™ so you'll still be getting the best possible results in the field of wittering on about old videogames no-one cares about. In "celebration" of the summer season, today's old videogame no-one cares about is Irem's 1983 bikini-based rock-dodging simulator Tropical Angel! 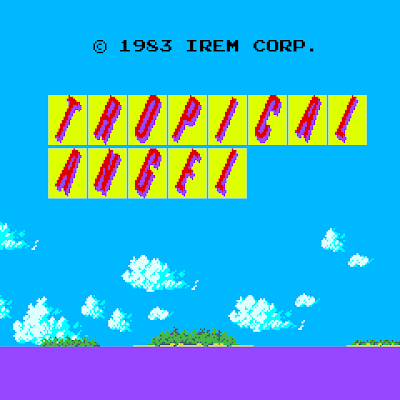 For those of you enjoying the current mini-revival in the day-glo Eighties/Nineties aesthetic, this title screen should be a treat, as it should also be those of you who hanker for the days of blue skies in gaming. Not sure where the purple sea factors into that. Maybe it's a reference to the wine-dark sea of The Iliad, maybe someone typed in the wrong hex value when setting up the colour palettes. 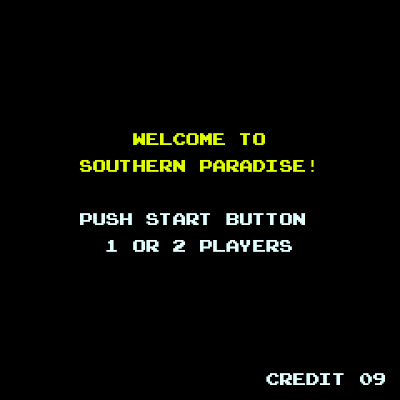 Welcome to Southern Paradise! It's really only a paradise if you like waterskiing, though. The amount of elysian bliss you receive from this place is directly proportional to how much you enjoy being pulled along by a boat with two planks of wood tied to your feet. If you wanted the paradise with the comfy chairs and the all-you-can-eat ice cream buffet, that's over at the Northern Paradise. I'm sorry, our brochure should have made this more clear. No, you can't have a refund. 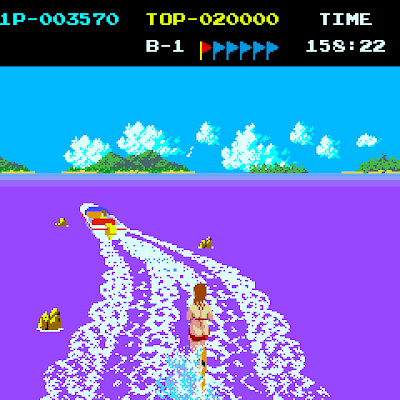 So Tropical Angel is a waterskiing game in which you control the titular Tropical Angel herself as she is dragged behind a speedboat that zips across the murky lavender water of Southern Paradise. You hold down the button to accelerate and move the stick to swerve left and right, and your goal is to pass through all six gates and complete the course. 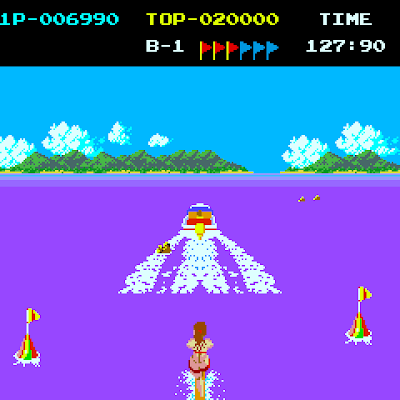 The conflict, the excitement, the raw watery drama that awaits you when you play Tropical Angel comes from the fact that apparently Angel did something to really piss off whoever is driving the boat, and as revenge they decided to drag her through a patch of water filled with more rocks than the Kuiper belt. 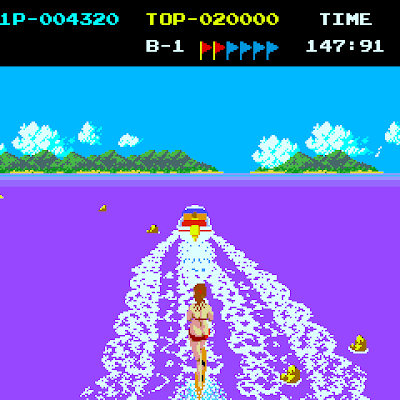 You have a set amount of time to pass through all six gates. If you can squeeze between the tightly-spaced buoys along the way you get some extra time, but if you hit something, like, I dunno, a rock, or if you spend too long turning in one direction, Angel falls into the sea, loses five seconds of time and has to start from the last set of flags she crossed. 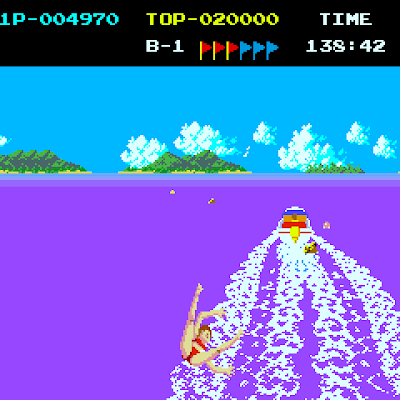 VGJunk's Top Tropical Angel Tip? Don't hit things. If you can master the skill of not waterskiing into rocks, your dominance over this game will be assured.
That's pretty much it for the gameplay. If you can make it to the end without running out of time, you'll pass the first test and move on to the second test. After that, there are more tests. In fact, every stage is described as a test, making Tropical Angel the videogaming equivalent of that recurring nightmare of mine where every day is exam day and I spent all my time studying advanced algebra when the exams are on Soviet Foreign Policy 1945-60 / waterskiing. 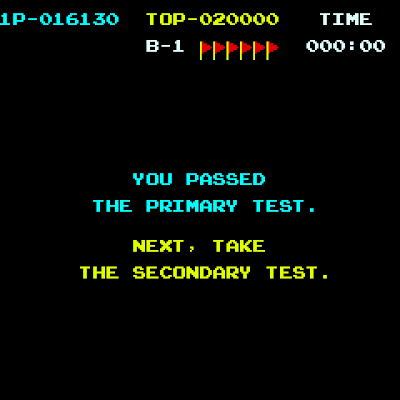 An endless cycle of testing and bikinis, that's Tropical Angel. I'm a little worried that this game is going to seep into my subconscious and the next time I have said recurring nightmare I'll be sitting my A-Levels in a bikini.
After B-Test part one comes B-test part two, and they're almost identical only with slightly more rocks. Complete both parts of the B-Test and you get a little reward. 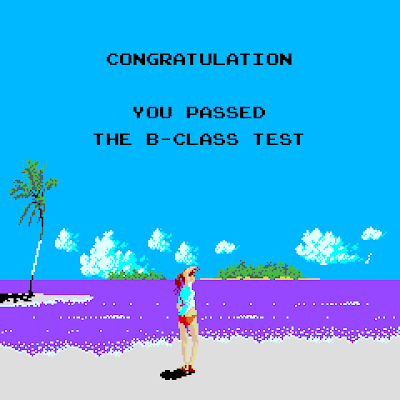 Tropical Angel is not an exciting or even particularly interesting game, but I think this between-test scene was worth skiing my way towards. There's something about a pixel beach scene with azure skies and fluffy clouds that's very appealing, plus it reminds me of OutRun. I'm going to play a bit of OutRun now. I'll be back soon. 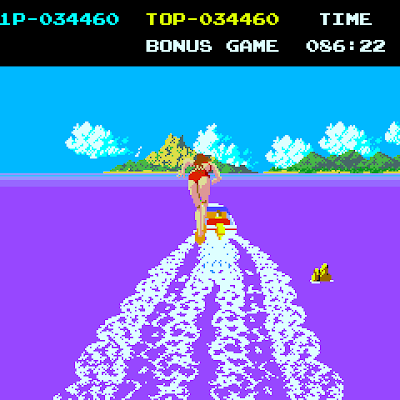 Okay, I'm back. Where were we? Oh yeah, there's a bonus game to help you unwind between tests - the boat driver feels a momentary pang of guilt about dragging Angel through all those rocks, and so he gives her the chance to relax by taking her through a course filled with ramps. Jump off as many ramps as you can to gather up the precious, meaningless points. Soar through the clear sea air with aquatic grace of an inebriated pelican. Keep an eye out for stray rocks, because while the skipper is giving you a break he still wants to keep you on your toes. 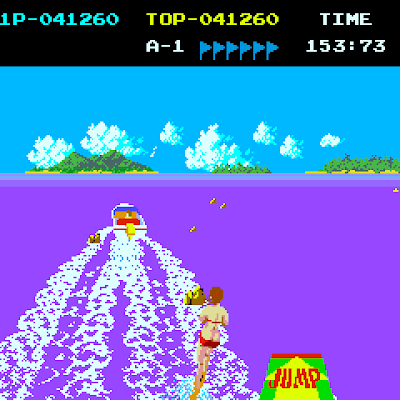 Back on the water, then. Nothing has changed, apart from the possibility of a sudden, bloody death. 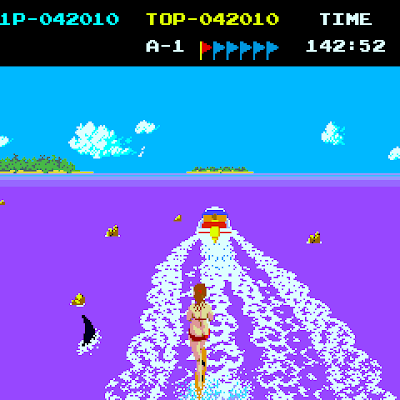 There are sharks around now, and bumping into one means an instant game over no matter how much time you had to spare. This is because the shark is eating you alive, or at the very least snapping off a limb or two. Waterskiing is a difficult sport to master if you're missing your arms, although I'm sure Angel is committed enough to her chosen sport to give it a go. She could hold the rope in her teeth.
The sharks also remove any lingering doubts that the guy driving the boat is anything other than a complete psychopath with a callous disregard for Angel's safety. They'll give a waterskiing boat license to anyone these days. Or maybe this is a test for both of them - Angel passes through her sublime waterskiing skills, the driver fails for refusing to drag her to safety after "accidentally" wandering into Jaws' home territory. 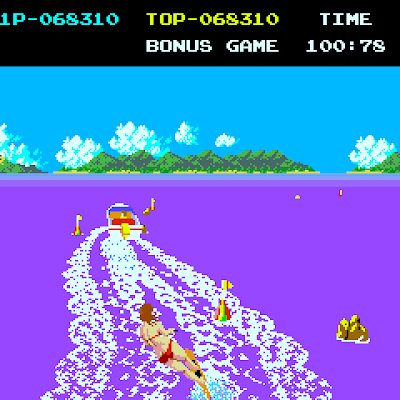 Between the A and Master Class test waits another bonus round, this time a slalom course where you have to weave left and right in order to ski around the correct side of the flags. I don't know why I explained that, that's just what slalom is. Having already become weary of Tropical Angel's gameplay, I spent the majority of this bonus round just holding down the accelerator and not steering. I made it past most of the flags. I wouldn't want to accuse Irem of half-arseing this minigame, but the lack of rocks and sharks make it seem like their hearts aren't really in it. 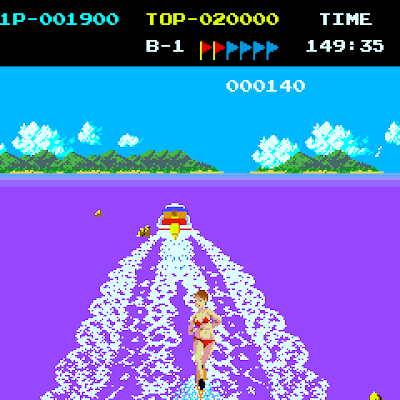 We're into the final set of tests, and nothing has changed beyond the amount of rocks increasing to such a level that Angel might as well be skiing across the Himalayas. Before I earn my title as Most Successful Waterski Test Taker 2013, there's one more thing to mention and it's pictured above. If you press the other button, Angel turns around as starts waterskiing backwards. You collect more points while doing this, but the downside is that you can't steer, and as this entire game is based on steering around things Angel's fancy moves lie somewhere between "useless" and "will almost certainly lead to a grisly death by hungry sharks." I'd skip it, if I were you.
Angel also jiggles a bit when she's facing this way, finally cementing the fact that Irem just made this game as an excuse to have a girl in a bikini as the playable character and that they were way ahead of Team Ninja and Dead or Alive's most famous "feature." 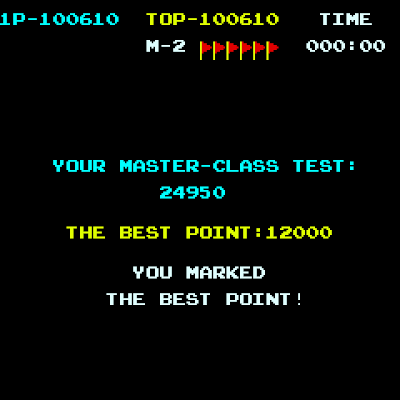 I marked the best point on my waterskiing test. That's... definitely a sentence. Writing this website really has taken me to dizzying new heights of gaming experience.
Much like a Michael Bay film, Tropical Angel offers about five minutes of diversion followed by a rapid descent into tedium, although unlike a Michael Bay film they probably didn't spend the GDP of a small African country making it. The game's real problem is the lack of variety, and if you've played through the first test then there's not much point carrying on unless you're really excited to see a blocky shark's fin half-heartedly bumbling around at the bottom of the screen.
There's not much wrong with the actual gameplay - the main issue being that the collision detection of the sharks is a little iffy. Angel moves around much as you'd expect, and while at first obstacles can seem to come at you in a slightly random fashion, once you've learned that a) you can let go of the accelerator to make sharper turns and b) you can predict where obstacles are going arrive by looking whereabouts in the boat's wake they are, the gameplay becomes a much smoother and a perfectly acceptable experience.
All in all, Tropical Angel is about what you'd expect from a thirty-year-old waterskiing game whose main draw was that your character is wearing a swimsuit. 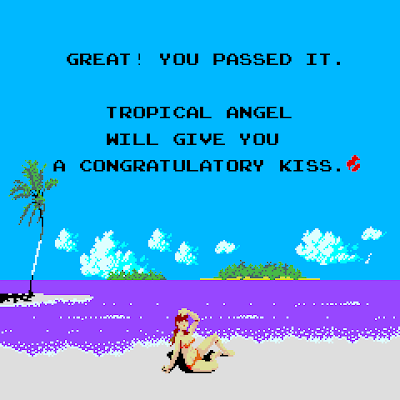 At least there's an ending, sort of. Angel lies on the beach, clutching the head wound she suffered after being violently thrown onto the sand after crashing into, you guessed it, a rock. Confused and suggestible after her cranial injury, she gives the player a "congratulatory kiss." This scene comes off as a little creepy, which I think is down to the way the text appears on screen one word at a time in a very robotic manner, an off-screen machine ordering Angel to GIVE. THE. PLAYER. A. KISS. That's Southern Paradise, folks - where the purple waters are infested with sharks and robotic voices compel women to kiss people. 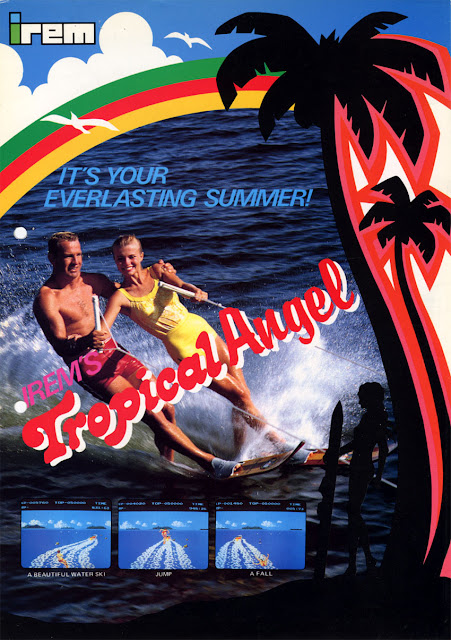 Tropical Angel's arcade flyer is another live-action affair, and while it's not quite as gloriously daft as Konami's offerings in the field it has it's own charm. More charm than the game itself, at least. The promise that "It's your endless summer!" is one that Irem didn't really follow through on, mind you. You can complete this game in half an hour, which coincidentally is about how long a British summer lasts... and as I finish this article, it's started raining. Looks like the British summer really has arrived.


Recently on VGJUNK:
Gaming websites at the turn of the millennium!
Magical Cat Adventure is like me - pretty but dull.
Big dog, small game - Beethoven's 2nd!
Posted by VGJUNK