A combination attack of busyness and illness has assailed me this week, so in lieu of a full-size article here are some ramblings about a subject that has fascinated me since childhood - the Robot Masters of the Mega Man series. I already made a video about Cut Man, but that was just a brief glimpse in to the baffling engineering decisions of the Mega Man universe, a world where Dr. Wily could take over in the blink of an eye if he'd just stop making robots with such glaring mechanical flaws that you'd think they'd been built by the North Korean arm of Poundland.
So then, some thoughts on Robot Masters. You can only hope that Dr. Wily didn't program them with true sentience, so that they can live blissfully unaware of their defects. 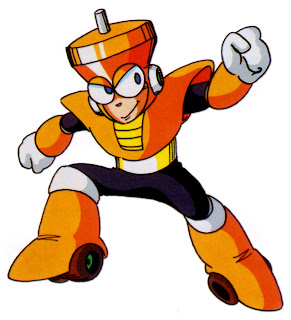 Having twice been defeated by Mega Man, Dr. Wily decides that for Mega Man 3 he needs to fight fire with fire - except he's already tried Fire Man and Heat Man and it didn't work, so he goes with his back-up plan of fighting plasma blasts with spinning around really fast. A limited skill set, you might think, but don't forget Top Man's many other practical applications, like drilling holes in frozen lakes to facilitate ice fishing, or doing Spirographs really quickly. 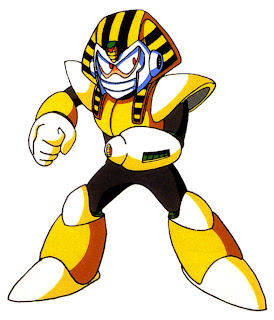 Sometimes Dr. Wily gets it right, and I'm certainly not going to complain about a Robot Master being patterned after a Pharaoh. He has the regal bearing and haughty demeanour of those ancient Egyptian kings, but without all the brother-sister interbreeding and propensities toward slave labour. Pharaoh Man is okay by me, but I brought him up for a reason: in Mega Man & Bass, you can collect CDs that each contain information about a Mega Man character, including their strengths and flaws. Pharaoh Man's weakness? Beautiful women. This has to be evidence that Dr. Wily doesn't program each Robot Master with a specific personality, because surely even Wily isn't so much of a dick that he'd build a thinking, feeling android and then purposefully make it scared of relationships. There's world-conqueringly evil, and then there's just downright mean. 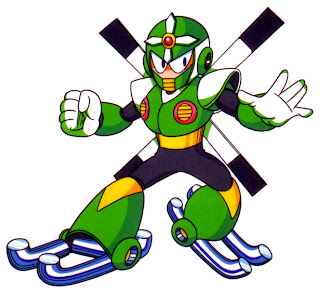 Gyro Man is a helicopter robot. Why is he a helicopter robot? Because Dr. Wily ran out of money and couldn't afford to give him the jet engine he was supposed to have. He tries to play it cool on the subject, his CD database quote saying "that is not a problem," but we all know that inside he's filled with seething rage at being born a Budgie when he could have been a Top Gun. 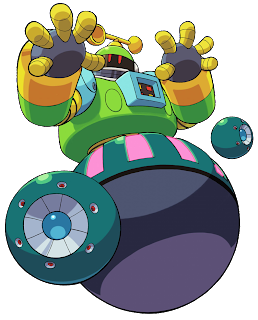 I can't speak for the veracity of their information, but I've seen a few Mega Man sites claim that Astro Man is the "world hide-and-seek champion." Alright, for one thing, who organised the World Hide-and-Seek Championships, and why did they let the robot with the ability to create new dimensions enter? Surely that devalues the whole event, it's like letting formula one cars enter the Olympic hundred metres. 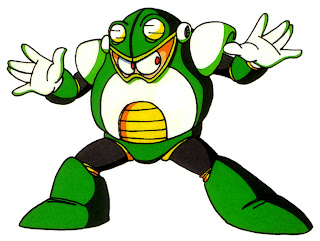 So, he's a toad. That's kind of rough on him - I've got nothing against toads, but amongst the vast diversity of the animal kingdom they're hardly the most threatening choice to design a robot around, are they? Even Sheep Man looks like he'd be more of a challenge. That said, I think I've figured out a way for Toad Man to at least look a little tougher. He should paint a zig-zag line on his eyelids and start every battle with his eyes closed, because then he'd look like this: 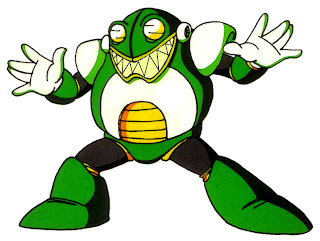 See? Now he's far more menacing. If only he'd ditch the jazz hands, then he could be truly terrifying. 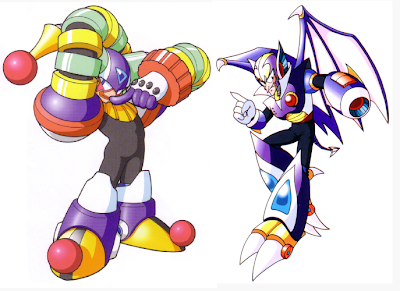 First off, I should mention that Dr. Wily didn't create Clown Man and Shade Man. That means there's someone else in the world of Mega Man who is so utterly despicable that they created a robot clown.
No, Wily merely reprogrammed these Robot Masters for his own evil ends... after he'd stolen them from the amusement parks where they were working as attractions. Just think about that for a moment. Let the scene fill your mind, a scene where an elderly scientist lurks outside a haunted house, waiting for his moment to nab the mechanical vampire that will surely be the final catalyst for his eventual domination of the world. It's a good job Mega Man spends his time fighting this idiot and not whatever sicko decided that cyberclowns would be a good idea. 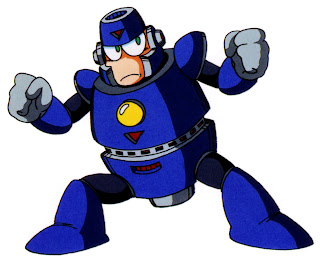 Hee hee hee, "Hard" Man.
What, were you expecting something more mature? Let me remind you that I'm a grown man writing about goofy robots from a children's videogame. Maturity is perhaps not my strong suit.