SIDE POCKET, POCKET GAL AND ME

After writing that long - some would say too long, and they might be right - article about the all-guns-blazing carnival of death and department stores that is Riot, I figured it's time to take it down a notch. I'm off on a trip down memory lane, a hazy path with a couple of gaming landmarks that shine as brightly as the neon sign outside a seedy pool hall. Today I'm going to talk about Data East's Side Pocket series and what it means to me. 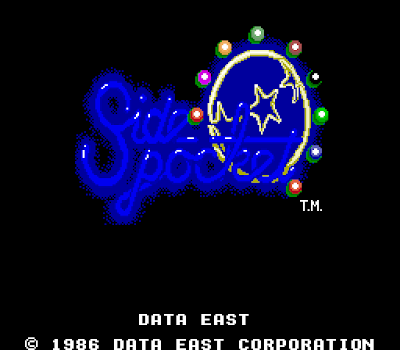 Side Pocket is a series of pool sims that started in the arcades in 1986, a recreation of the game that takes a lot of inspiration from the wave of golf videogames that were released around the same time. You aim your shot with the help of a dotted line, you enter the power by pressing a button to start a gauge moving and pressing the button again to stop it at the desired level, you can apply spin by choosing where you hit the cueball. It's straightforward, inutitive and quick to pick up - very important for an arcade game. 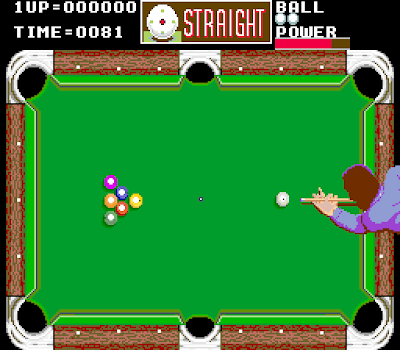 I've always been slightly confused by the point of arcade pool games, truth be told. I think this is because I'm British. I'm not saying we're easily baffled by the flashy-blinky-upright-boxy-game-pods of the mid-eighties, although I imagine there were more than a few gruff northern men who wondered what on Earth had happened to the world the first time someone explained Pac-Man to them. No, it's just that when I think of places you might have found an arcade cabinet in Britain in 1986, I don't really think of "arcades," per se, not in the "big rooms full of videogames" sense. I think of seaside resorts, pubs, leisure centres: when I was a kid, that was where arcade games lived. Of course, now that I'm an adult they don't live anywhere, unless they have a plastic gun attached to them or require some kind of undue physical exertion to operate, in which case you might see them in the foyer of a larger cineplex. 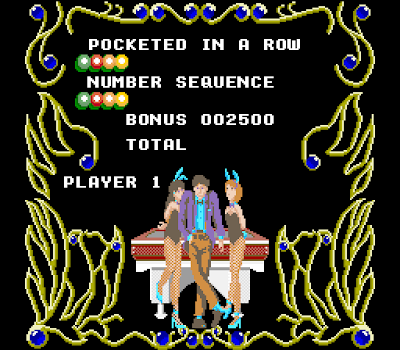 Maybe I'm entirely wrong - back then I was hardly of an age to be attending nursery school, let alone an arcade - but that's how it felt to me. That's where arcade games were found, which undermined the point of video-pool because they were places that also often contained pool tables. Actual, physical ones, real tables that usually cost less to play than the arcade equivalent and didn't hurl a "Game Over" screen at you if you missed three shots in a row like Side Pocket does.
Okay, so maybe I'm being a little disingenuous. I can see the appeal of the arcade pool title. It takes up less space than a real pool table, there are fewer pool cues available for drunken louts to crack people over the head with, with and a videogame allows you to do things that aren't feasible in real pool. Things like cartoon girls who are ready and willing to take their clothes off if you're half-decent at the game. 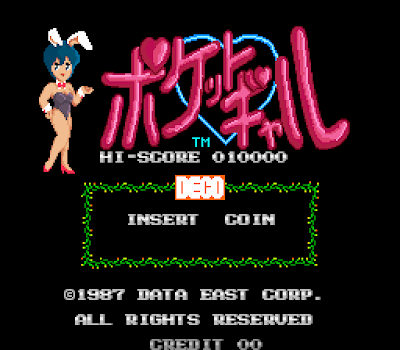 This is Pocket Gal, a slightly improved version of Side Pocket that hit the arcades in 1987 and has one major difference over its predecessor: babes. Okay, so maybe "babes" is pushing it a bit. Blocky cartoon anime lumps, while more of a mouthful, is probably more accurate. 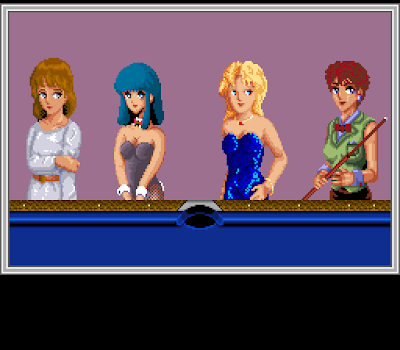 The aim of Pocket Gal is to score enough points to clear each round, which isn't as simple as potting all the balls. That won't net you a high enough score, so you have to get extra points by potting balls in a row, or in the correct order, or by knocking them into specially-marked bonus pockets. 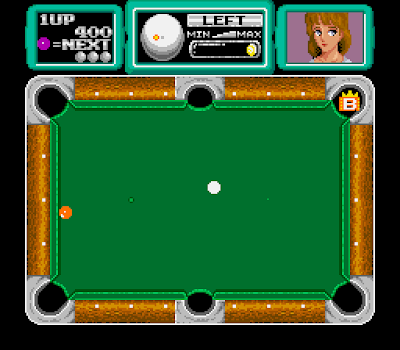 If you meet the score requirement, you'll move to the next stage, but not before the girl you've just beaten takes all her clothes of in a display of incredibly tame pixel titillation that has all the raw eroticism of a egg salad sandwich. 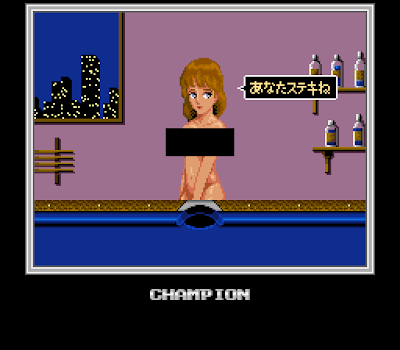 Pictures of breasts are still pictures of breasts even when they're composed of less pixels than half a Tamagotchi, so I had to censor them. You get the idea, though, and I'm sure you'll agree that these girls are hardly likely to set your loins ablaze with unfettered desire. It's their expressions that  fascinate me - they look, if not quite bored, then at most wryly amused. Frankly, this is a big step up from kind of tearful, ashamed, "please don't look at me" vibe the Japanese often seem to employ in situations like this, and it's quite heartening to see the girls not being upset about the whole thing. "Yep, I sure did lose that game of pool. Well, time to take my dress off," their faces seem to say, and they stand there in the nip for a moment before you jet off to the next pool-playing locale. I assume the reason is that Data East didn't want to draw any more faces for them.
It might sound like I've been thinking about Pocket Gal too much, and that's true. Thing is, I've been thinking about it for nearly twenty years now. 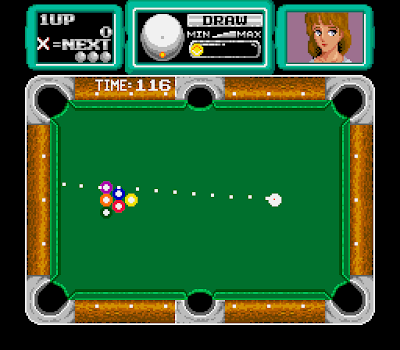 My memory is not great. It's got more empty patches than the cabinet Steven Seagal built to hold his Oscars. There are birthdays, Christmases and whole years of secondary education that I have no recollection of. Like I say, it gives sieves a bad name. However, of the few memories from my youth that remain clear and bright even as I shuffle into middle age, there's one that revolves around Pocket Gal.
When I was a kid, no more than eight or nine, we went on a family holiday to the English seaside resort of Great Yarmouth. As I've mentioned, seaside resorts meant nothing more than arcade games to me, and at some point on the holiday I found myself in the "amusements," gawping at the arrayed cabinets and trying to find a machine that'd give me a game for ten pence. At the back, on a row of cabinets that ended with a fire door thrown open to the summer sunshine, was Pocket Gal. 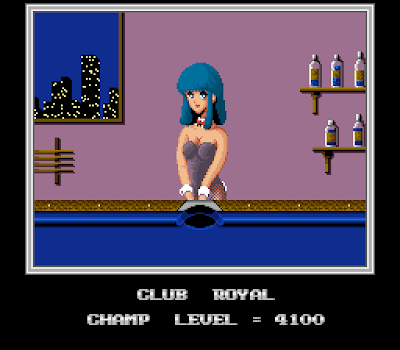 It was ten pence a go, so I played a very short game of video pool, and for some reason the memory of this event has been permanently seared into my mind. First day at school? Not a thing. Half my childhood birthdays? Couldn't tell you what happened. Hell, I barely remember what happened last week, but this one youthful encounter with a soft-porn pool simulator that was outdated even back then? I can't shake the memory of it, and I don't know why. It's not like I'd never played an arcade game before - better, more impressive arcade games, titles like After Burner that were far more deserving of a permanent spot in the VGJunk memory banks - and the thing is, I didn't actually see the cartoon boobs. That's the kind of thing that'd imprint on a young child's mind and form a memory that lasts through the tumult of their lives, but Pocket Gal isn't an easy game and I wasn't good enough to see any digital flesh. I didn't even find out there was nudity in Pocket Gal until I played it years later via emulation. I was surprised, but I also did a kind of mental shrug as I realised why you'd keep a digital pool game around in the first place. 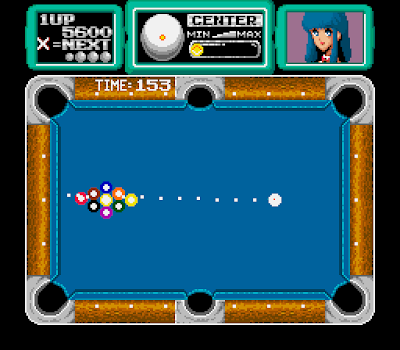 So that's my story about Pocket Gal and the fact that I remember it so vividly even though I have no reason to, and I'm sorry for rambling on about it, but I'm not quite finished. The Side Pocket series eventually moved out of the arcades and onto a wide range of home consoles (where a pool sim, to my mind, makes a little more sense) such as the Megadrive, NES and Game Boy.  Here's the title screen from the SNES version. 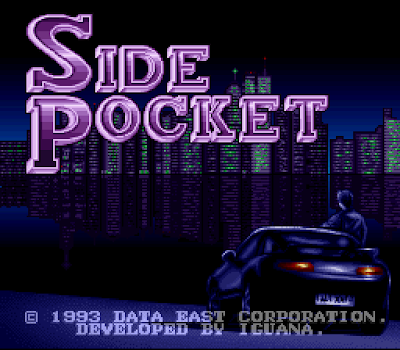 Classy, right? That guy might be contemplating driving his car into the bay to escape from his crippling gambling debts, but he looks stylish while doing it.
The SNES version of Side Pocket is much the same as the original, only polished to a shine and with no trace of nudity. Where the original suffered from only having a fairly narrow range of possible aiming angles and limited control over the cueball, the 16-bit ports offered a much smoother experience. I can't claim to be an expert on the snooker, pool and billiards titles of the early nineties, but I feel pretty confident in saying Side Pocket has to be one of the better ones. 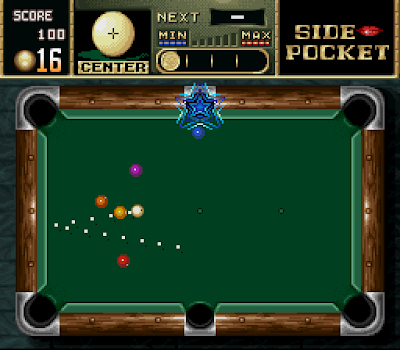 In fact it's so much fun that my best friend and I played it quite a lot during out university days. It became, for a while at least, a mini-tradition, particularly before going out - drink far too much cheap Tesco vodka, play Side Pocket and spend the rest of the night drunkenly humming the soundtrack. Okay, it was only me that did that last bit, but then I love SNES Side Pocket soundtrack - it's smooth, jazzy, the kind of soundtrack you could only ever hear in a Japanese pool simulation from 1993.

It was composed by Emi Shimizu, by the way. Just in case she ever happens to read this, I'd just like to say thanks for the fine soundtrack and for giving me a new way to irritate my friends by half-singing along with words I made up on the spot, full of the happy yet slightly queasy fuzz that only cheap liquor can bring, while they try to take their shot. 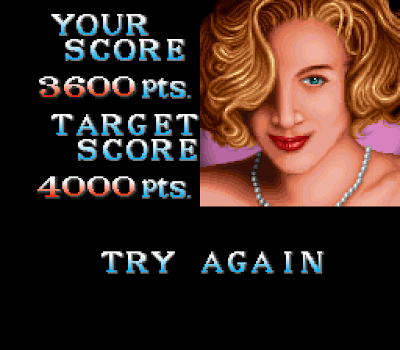 In conclusion, Data East's Side Pocket series has given me a lot of memories - far more memories than you might expect from a not-especially-famous, occasionally pornographic line of bar-room game simulators. And if you read all this, thanks for sticking with me as I gabbled on in a very uncoordinated kind of way. Normal service will be resumed next time.