Hallowe'en month continues with a journey back in time to ancient Japan (and the early days of the Famicom) with Jaleco's 1985 story of a ninja who's way out of his depth: it's Ninja Jajamaru-kun! 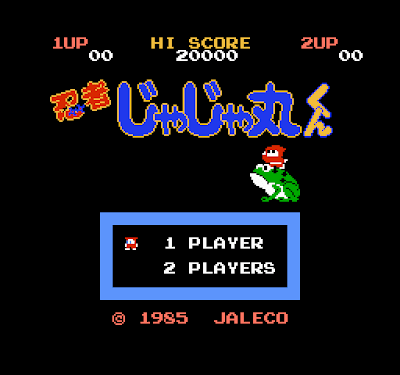 Okay, so ninjas aren't really recognised as being part of the Hallowe'en canon, but think of it this way: they make their living creeping out of the shadows and killing people. Based on that, I think I can cut them a break and let them join the Hallowe'en party. Plus, in Ninja Jajamaru-kun your assassination targets aren't rival daimyos but a variety of ghosts and demons from Japanese folklore, so spooky shenanigans are all but assured. 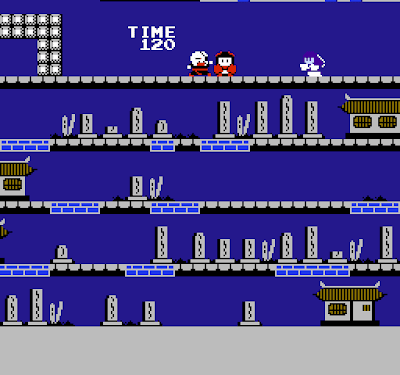 NJK has a somewhat complicated history. As far as I'm aware, the Ninja-kun series began in 1984 when a company called UPL developed an arcade title called Ninja-Kid (Ninja-kun Majou no Bouken in Japan). 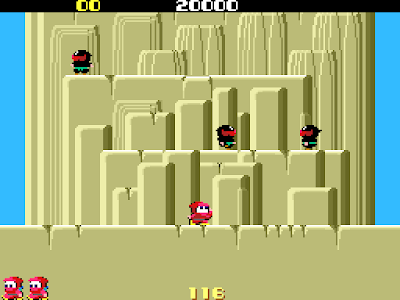 It was ported to various platforms by Jaleco, who liked the cute-ninja-platformer idea so much they made their own title featuring the original Ninja-kun's kid brother - Ninja Jajamaru-kun. Both series, the UPL original and the Jaleco Jajamaru series, continued on their own paths with Jajamaru-kun getting new games right up to the Gameboy Advance era. Oh, and it's not to be confused with Culture Brain's similar-looking Super Chinese series. 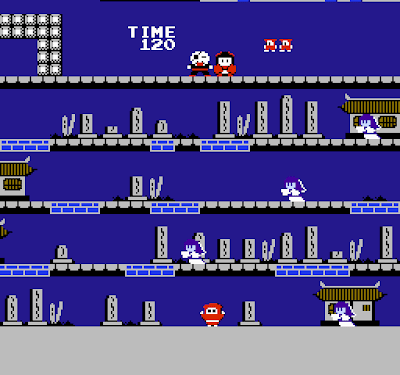 Anyway, this NJK game is an early NES game, so you know what that means: yep, a princess has been kidnapped and only our pint-sized shadow warrior can save her because his big brother (the original Ninja-kun) is away somewhere, presumably sneaking into a castle so he can burn it down or doing a bit of light espionage or something. In this case, the princess in question is the imaginatively-named Princess Sakura who has been kidnapped by Sagat - you can see them up there at the top of the screen. I know it's not really Sagat, it's just that years of playing Street Fighter mean that if I see a bald dude with an eyepatch then it must be Sagat. Plus, this way I get to invent my own elaborate back-story about why M. Bison needs this princess so badly that he got Sagat to kidnap her. It's probably something to do with Psycho Power. It's always about Psycho Power with Bison. 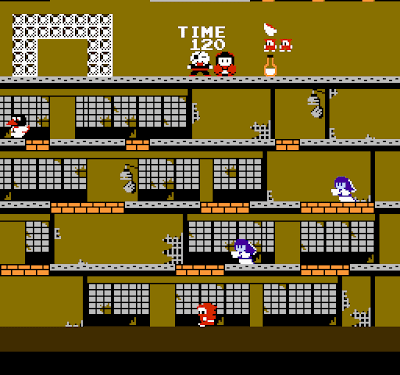 Gameplay-wise, NJK is a mixture of Bubble Bobble and the original Mario Bros. game, with a little bit of Joust thrown in as well. Each stage consists of a closed area with four levels that can scroll left or right a little. Jajamaru's task is to kill all the enemies on a stage without getting killed himself: doing so nets you some points and sends you off to the next stage. That's Jajamaru at the bottom of the screen, the little red fella who you may have noticed is adorable. It's the giant eyes that do it. 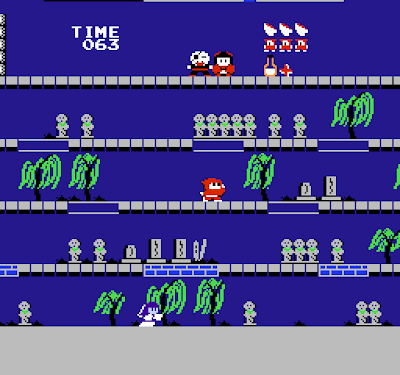 Killing enemies is the simple matter of hitting them with a shuriken which Jajamaru throws at the press of a button. The other button makes you jump, which works as you would expect. I know he's just a kid, but Jajamaru really doesn't show the kind of grace you'd expect from a ninja - jumping upwards is pretty much the extent of his ninjutsu skills. Jumping serves a few purposes: the most obvious one is moving you up to the next level. The blue bricks can be smashed by ramming them with you ninja noggin, creating holes which let you move between levels as well as occasionally acting as traps for the stupider enemies. 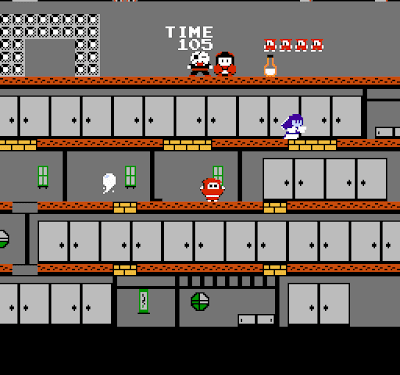 The other thing your jump is useful for is stunning enemies. Unlike most games of this type, touching enemies doesn't hurt you - the only way they can kill you is by hitting you with their projectiles. Some enemies, particularly the later ones, can't be hit unless you stun them first, so you need to jump on them to daze them. This seems to work best (and here's where the Joust element comes in) if you jump at their faces and try to hit the top half of their heads. Once stunned, you can whip a shuriken into them to finish them off. He may be cute, but I have to give Jajamaru some credit for choosing a pretty ballsy battle strategy which revolves around throwing himself at the faces of the vicious supernatural creatures that want him dead. 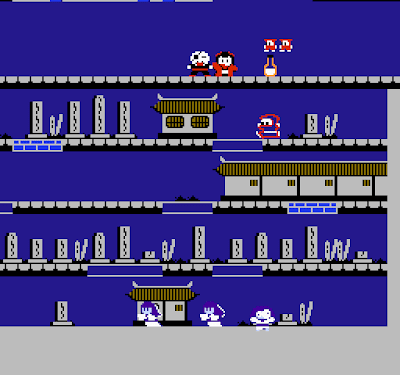 That's all there is to it, really. Clear a stage, move on to the next one, repeat. There's no ending - the game loops indefinitely - and there are only a few complications, one of which is the power-ups. Jajamaru can collect a couple of items by smashing the blue bricks, including better shurikens, a little cart that makes you faster and an invincibility potion. Oh, and sometime there are bombs hidden in the blocks that will kill you if you touch them. Thanks for that, Jaleco. The best thing about the powerup is that if you collect three different ones, Jajamaru summons a giant frog to ride around on. 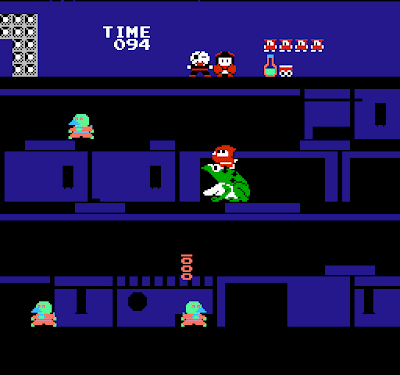 A giant frog that paralyses all the bad guys and then eats them, no less. A harsh blow indeed: reanimated from the afterlife only to spend the rest of eternity in a frog's stomach. The ninja frog thing comes from the story of Jiraiya, a legendary ninja who could turn into a giant toad which appropriately enough would be excellent for Hallowe'en parties. Wait for the host to go and fetch you a drink, transform into a giant toad while they aren't looking, sit on their sofa with a look of glassy-eyed incomprehension as they try to offer you a rum and coke. You'll be remembered, I can guarantee that. 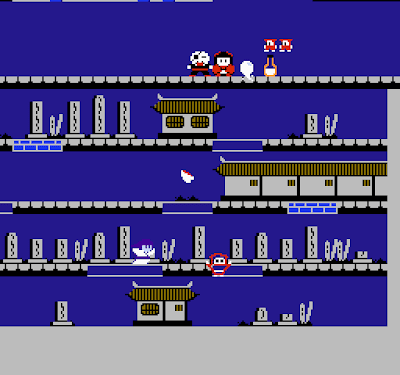 The other thing is that sometimes the Princess with drop a sakura blossom from the top of the screen: you can see one in the middle of that screenshot. If you've collected three when the level ends, you enter a bonus round. 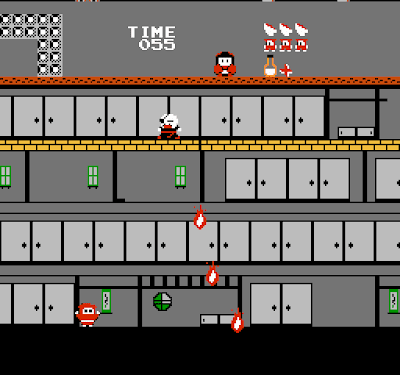 Sagat patrols the top of the screen throwing Tiger Shots, I mean, fireballs, down at you and you have to hit him by throwing your shuriken upwards. Once you've hit him, the princess drops down, and boy is she pleased to see you. 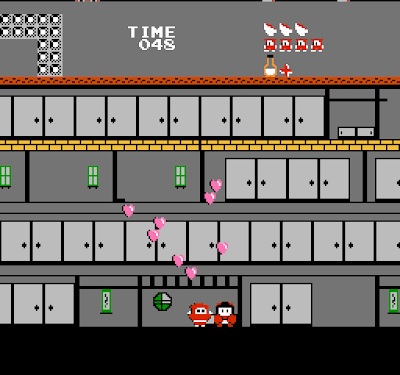 That's quite the outpouring of affection there. If one heart means she loves you, that explosion of romance must mean she has some kind of semi-psychotic obsession with poor Jajamaru. So, the princess is free of Sagat's evil clutches, so that means it's game over, right? No, of course not. At the start of the next stage she's right back at the top of the screen with her captor, which leads me to believe the villain of this game is either tremendously effective at kidnapping princesses and has possibly been getting tips from Bowser, or Princess Sakura really enjoys watching ninjas risk life and limb for her benefit. I suppose a third option is that it's not actually happening and Jajamaru is suffering from some kind of delusional mental break brought on by the stress of constant ghost assaults.
Speaking of ghosts, let's take a look at the goofy ghouls Jajamaru will be facing in his quest to rescue the princess a million times. I mean, this is a Hallowe'en article after all.

The first enemies are a type of Japanese youkai called yuki-onna or snow women, the spirits of people who died in snow-related circumstances, come back as yuki-onna and generally act like a real bitch about it. Look lady, it's a real shame you froze to death, but don't take it out on me.

This is a karasu (raven) tengu, a mountain spirit with the head of a raven and the personality of a grumpy old man. I must admit, he doesn't look particularly threatening here, probably because he looks like he's wearing pjyamas.

Yay! It's the return of the karakasa, the charmingly goofy umbrella ghost that I mentioned in the Demon's World article. Once an ordinary umbrella, it happened to hang around for 100 years and this somehow caused it to come to life. Utterly unthreatening, but Jajamaru has no qualms about defeating them - after all, he is a ninja. The saddest thing about the karakasa in NJK is that when you kill them, you can collect their souls for extra points. He waited 100 years for that soul, you little prick!

It's a skeleton. A somewhat resigned-looking skeleton, as though he already knows that going up against a ninja is futile, but what else is he going to do? It's not like he can settle down and start a family, is it?

I think this is supposed to be a Hitotsume-kozo or "One-Eyed Kid", a cycloptic child dressed as a Buddhist monk. Like so many Japanese ghosts, his raison d'etre isn't the carnage and bloodshed of western monsters but general dickish behaviour. Apparently he can be stopped by showing him a woven basket, because he sees the gaps in the weave as hundred of eyes and he runs away, ashamed to possess just the one eyeball. As he should, the little freak.

And finally (unless there are more enemies that appear after the twenty-five or so levels I completed) we witness the relentless rise of the pink wafer biscuits! Not really, it's another youkai called the nurikabe. He is... a wall. An invisible wall, granted, but hardly likely to inspire terror. Yet again he exists solely to annoy people, in his case by stopping people from moving around freely at night by... being a wall. These Japanese monsters need to get a hobby or something. A hobby that isn't "being a dick to people for no reason", I mean. 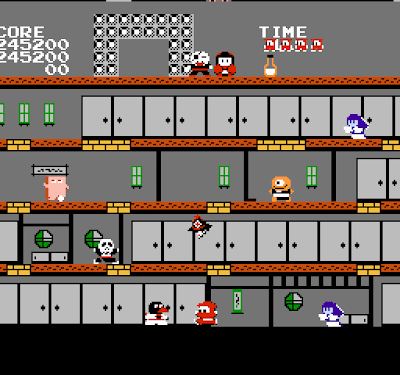 Once again the karakasa is my favourite, although they're all pretty charming. While the graphics look primitive today they're really not that bad for an early Famicom game, and they're undeniably cute. Less endearing is the music, which isn't a bad little ditty until your realise you'll be hearing it on a short loop for 80 percent of your play-time. 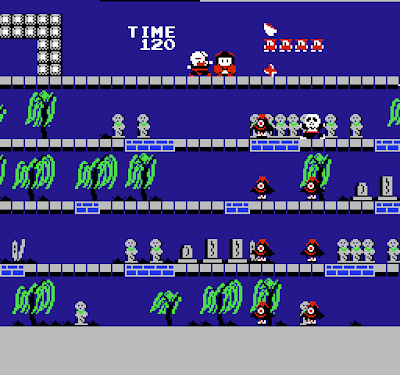 I like ninjas, and I like ghosts and you know what? I kinda like Ninja Jajamaru-kun, too. It's hardly a genre-busting masterpiece packed with innovation, but it's certainly fun to pick up and play for a little while. The controls aren't too bad, (even if the jumping is a little stiff,) the graphics are nice enough and there's just enough to it so that boredom doesn't set in immediately. 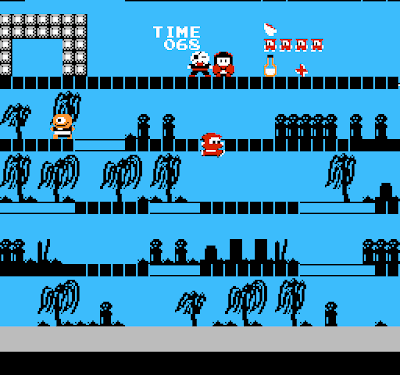 It does raise one question, though: NJK is yet another game that forces us to wonder what advantages our hero actually receives through being a ninja. His jumping skills are hardly Olympian, his attacks consist of throwing a sharp bit of metal a short distance and he doesn't even have access to the ninja's fabled stealth, standing out as he does in his bright red outfit. Not that stealth would be much use anyway: if anything can out-ninja a ninja, it's a ghost. I'll let him off with his red outfit though, partly because there are some theories that dark red is actually better than black for nighttime camouflage but mostly because wearing all black and creeping around graveyards at night is liable to get poor Jajamaru labeled a Goth. 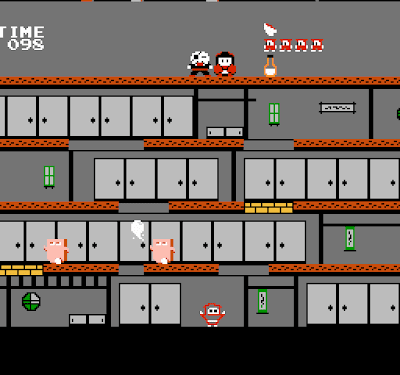 That's Ninja Jajamaru-kun, then: a fun little retro platformer with cute graphics than might keep you entertained for a short period of time. Forget about that, though - this is a Hallowe'en article, so let's consult the Hallowe'en-O-Meter for a recap of the game's creepy credentials. 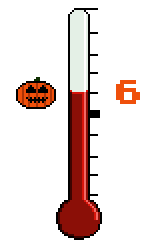 Six out of ten is not bad for a game about ninjas, not bad at all, although I couldn't justify giving it a higher rating because Japanese ghosts are just so placid. Still, karakasa = a big thumbs up from me.

Recently on VGJUNK:
Part 1 of this year's Hallowe'en VGM playlist!
The Hallowe'en season kicks off with Toaplan's Demon's World!
Brawlin' (and humpin') with Konami's Vendetta!
Posted by VGJUNK