The Simpsons has asked many pertinent questions of the human race, but by far the most vital to the continued existence of mankind as a species is surely "Remember ALF?". At least, I think it was a question: maybe it was a command, and the writers of The Simpsons are secretly the acolytes of some ALF-worshipping cult whose purpose is to ensure that the memory of a crappy puppet-based sitcom lives on. One of the tools this insidious cult used to spread the Gospel of ALF was a videogame made in 1989 for the Sega Master System. The horror! If you don't remember ALF, he was a lot like E.T.: a small, friendly, brown alien with a face like congealed faeces who is stranded on Earth. He lives with a family in the suburbs, generally acting like a freeloading prick and performing the mandatory hijinks while plotting to eat the family's cat.
ALF's mission is to fix up his spaceship so he can go and meet his alien friends, and there's only one kind of game that a licensed game based on an '80s sitcom can be; a side-scrolling psuedo-platforming adventure. 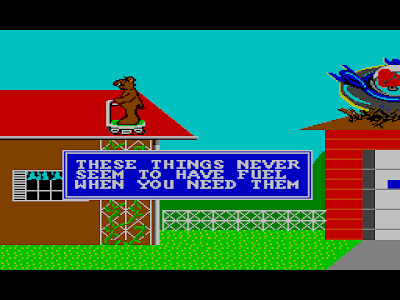 There's ALF, standing atop a Segway-looking thing and complaining about a lack of fuel. The graphics certainly are colourful, aren't they? Like a child ate a box of crayons and then threw up. So, your mission is to find fuel; but how? By helping ALF through this technicolour nightmare on what is essentially one long fetch quest, of course. At least ALF controls reasonably well: the D-pad moves him around, Button 1 makes him jump and Button 2 interacts with things. Once you've figured out how to move him around, it's time to start the game proper. 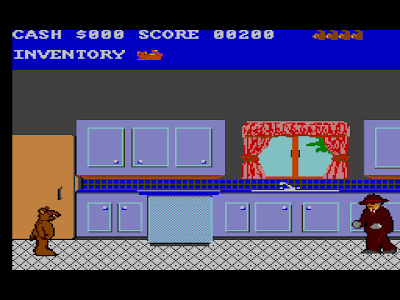 Oh look, I appear to have wandered into a kitchen. I have no idea if this resembles the house from the show in any way: I haven't seen an episode of ALF in around twenty years, and I have no desire to start now. I'm going to assume that, because this is a cheap and nasty licensing cash-in, it looks nothing like the house that ALF lived in on the show.
There was a cat on the counter; I picked him up and put him in my "inventory" which, given ALF's predilection for eating cats, is possibly a euphemism for "stomach". Also, there's a man in the house. He appears to be wearing all-in-one overalls in a fetching shade of maroon, and he's constantly closing and opening his fists like a serial killer waiting in line at the Post Office.

Stranger danger! Of course, touching him kills you instantly, so instead of touching the creepy man who has wandered into my house, I'm going to open the fridge instead. 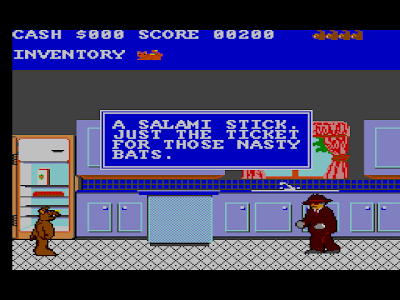 Wait, what bats? Can you see bats, ALF? We've only been on two screens and I didn't see any bats. Do we need to up your dosage again? ALF picks up the salami and it also goes into your "inventory", further strengthening the case for it being a stomach metaphor. Before ALF can start ranting once more about how only salami can defeat the invisible bats that haunt his every waking moment, it's on to the next area. 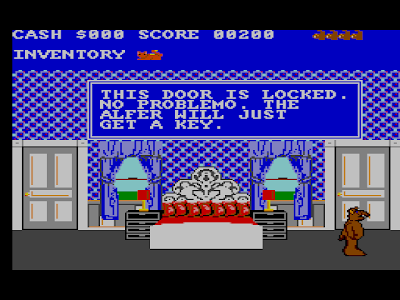 It's a door, in a bedroom. It is locked. This is apparently "no problemo" because "the ALFer" will just "get a key". Hopefully it will be "no problemo" when I "stab the ALFer in the neck" because he can just "get more blood". Onwards, and downwards, to the darkened basement. 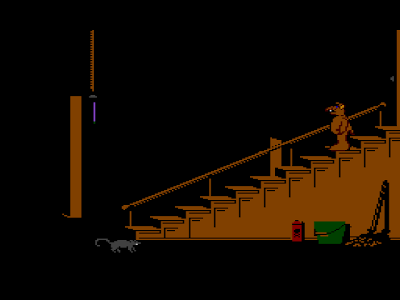 There's a rat patrolling the bottom of the staircase, so ALF vomits up the cat from his "inventory" and sets it free. It kills the mouse, and you can proceed. Turning the light on reveals... 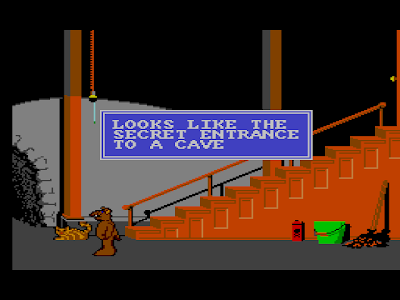 Really? Because to me it looks like a large bill for structural repairs to the house's foundations. 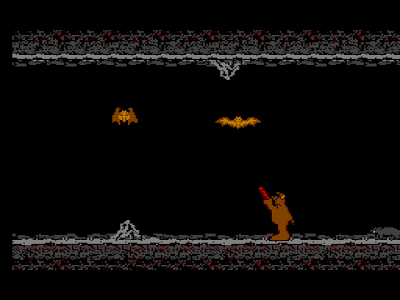 Oh look, the cave is full of bats. Is there any animal I have killed more often during my career as a videogames player than bats? Castlevania and Pokemon alone must have accounted for hundreds of thousands of murdered chiroptera. I have blood on my hands, people. Bat blood, and it won't wash off.
As it turns out, a salami is not "just the ticket" for bashing in the furry little heads of the bats. That might be down to its status as a delicious meat product and not a cudgel, but I think it's mostly to do with the fact that ALF attacks by waving it feebly an inch in front of his own face like a spinster aunt who's managed to get her hand stuck to a copy of Razzle. 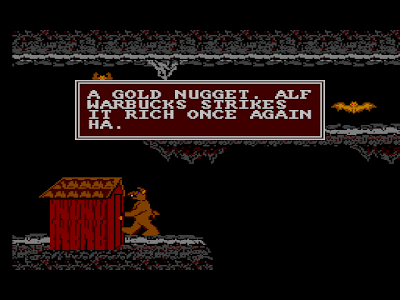 Why does all ALF's text make him sound like Basic Comedy Robot X-07? Still, it's funnier than the TV show. I wonder what's behind that shack? 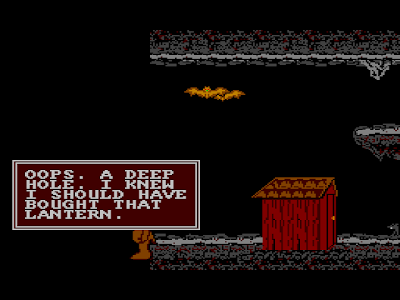 Goddamnit ALF. Notice how he hovers in the air just long enough to deliver what I think is supposed to be a joke before plummeting to his death, instead of scrabbling at the edge of the pit, desperately trying to save himself. Now that's commitment to a bit. Happily, when you die you restart at the entrance to the cave, meaning you don't have to slog past the salami-fearing bats again. With his new-found wealth, ALF leaves the cave and heads for the shops. 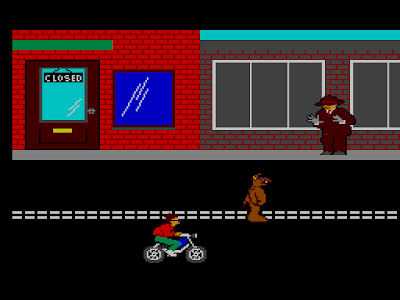 The mean streets, mid-afternoon. The worst scum in the city patrol the tarmac on their bizarrely-proportioned bicycles, running down any alien that dares to step off the pavement. Hellishly jaunty music plays, set on a five-second loop, the pitch so high that the neighbourhood's dogs are preparing a lawsuit against the composer. A bleak place, where the weak are crushed and only the strong ooh look a shop! Let's go in! 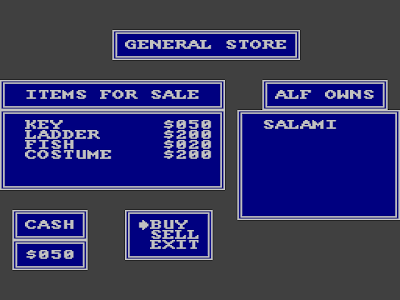 Luckily, ALF has managed to find a shop that takes unprocessed gold as payment. They're selling a key. A key that unlocks the bedroom door in ALF's house. I think you should back slowly out of the shop, ALF; don't make eye contact and don't you dare stop to make a wisecrack.
Back in the house, you can use your new key to open various closets until you find a swimsuit. 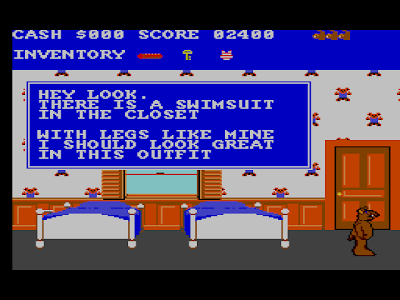 Ha ha, oh ALF, you're a laugh riot. Looking at ALF's body shape, I'm not sure that swimsuits going to fit him properly. I think there's going to be some... overspill. It's times like this that I'm glad about the rudimentary nature of 8-bit graphics. 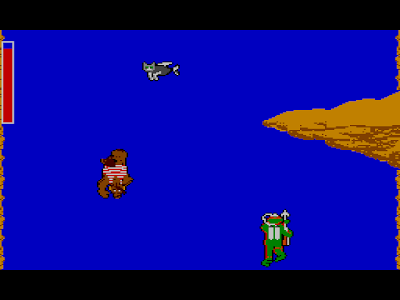 There's a pond in the back garden that you can dive into to test your new swimsuit. I was rather hoping that, as a puppet made of foam rubber and fake fur, ALF would just disintegrate in the water and I'd be spared any more of his smug antics, but sadly that's not the case. The pond is far deeper than you might expect a garden pond to be, so maybe I was wrong and the ALF family own a nice property on the edge of the Marianas Trench. It's a dangerous place, filled with harpoon-firing frogmen (instant death) and adorable kitten-shark hybrids (also instant death, but just so pwecious!).
Along the way, ALF find himself a nice big treasure chest full of pirate gold. 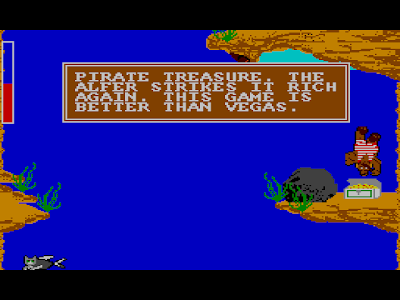 ALF smashes through the fourth wall, and you're left to wonder if his main motivation is getting back into space or pure greed. Right at the bottom is a clam with a huge pearl that ALF can also steal. 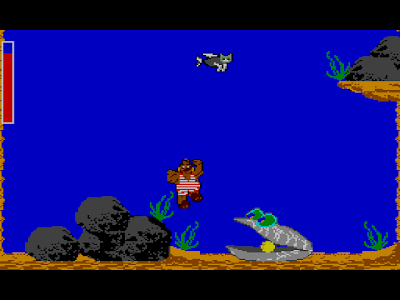 Now that the ocean depths have been plundered for ALF's selfish needs, it's back to the shopping district to sell you loot. Selling the pearl nets you another $100, so it's time to spend, spend, spend! The five and dime store has a lantern, useful for the dark basement, and an ALF book. Oh what the hey, let's buy the ALF book and see what happens!

(Animated for your displeasure.)
What.
You've got to be fucking kidding me.
Buying the book gives you the text shown above, and then dumps you right back at the title screen. Jesus fucking Christ. Really, Sega? Do you think this is funny, you bunch of pricks? God damn you all. You know what I be funny? I'm going to track down the developers and lay traps for them. I'm going to follow them and wait until they go into a shop and start browsing items on the shelves. I'm going to build a machine that attaches to the shelves, and when they pick up a book or a DVD or a videogame to read the blurb on the back, the machine springs into action and uses compressed air to fire a huge steel boot right into their goddamn crotch.
Anyway, if you can be bothered to redo all that, you'll be back at the shop with a lantern. That means you can can go and waggle your salami in the basement until you get to the deep dark hole. 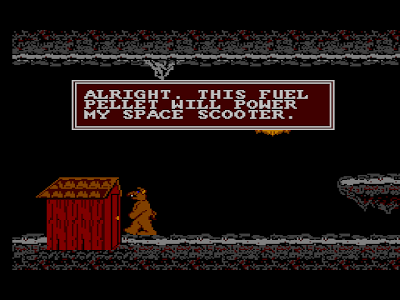 After another cave section where your primary problem isn't the bats but the appalling collision detection, ALF find the fuel he needs to power his Space Segway. Rather than slogging your way back to the house through the cave, you can just kill yourself to warp back to the basement. I think it's time you people started a letter-writing campaign to Sega, accusing them of releasing a game that promotes suicide. You might be thinking "I can see how this game would make you want to kill yourself", but that's not true at all. You just want to kill the people that made it instead. 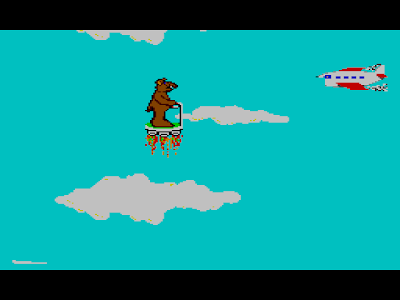 Space scooter go! There's another brief "action" stage here, where you have to hold the button to boost upward while avoiding the... well, I'm not sure what they are. I'm assuming they're supposed to be jumbo jets, but they're clearly smaller than ALF. They can't be in the distance, because touching them kills you. So, they're either some kind of tiny spy-drone sent to kill ALF (and godspeed to them if they are), or ALF's smug egotism has caused him to swell to a size comparable to a Boeing 747. The planes are easy enough to avoid, and after a while the sky fades from blue to black. I say "fades", I mean "displays several huge bars of different shades of blue".
ALF makes a brief stop at a convenient space station to buy a space suit, and then it's more of the same, except now ALF is wearing a spacesuit and you have to avoid meteors, too. Eventually you reach an exceptionally poorly-drawn moon: 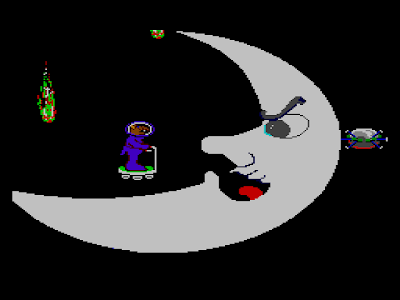 The moon looks simultaneously angry and lecherous and, despite the game not giving you hint fucking one about this, you have to land your scooter in its open mouth. Yeah, I'm sure that'll cheer him up. Inside the moon's gob, ALF finds a spaceship repair kit, and that's the end of the game. Yep, that's it, finished, you're done. Go home, back to your loved ones, and try and forget that this ever happened.
What, you want to see the ending? Okay, here it is: 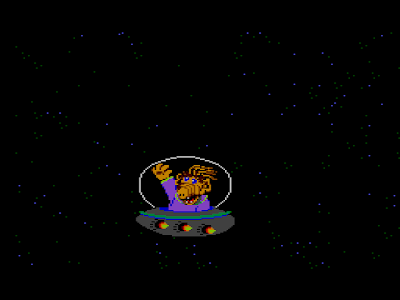 Yep, it's just a brief shot of ALF in his spaceship. So long, you smug git. Then there's a screen of credits. 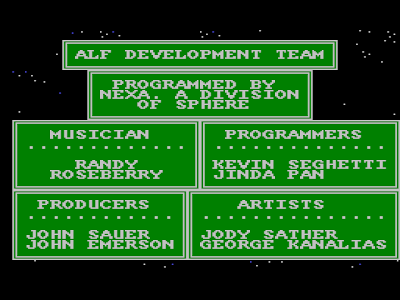 THESE PEOPLE. THEY ARE TO BLAME.
When the best thing you can say about a game is that it's extremely short, you know you've got something especially wretched on your hands. ALF is like some kind of master mould for crappy licensed games of the 8-bit era, a paradigm of no-fun, no-effort, no-nothing tie-ins that clogged the release schedules like lard in fat man's heart. The graphics are awful, the gameplay is shallow almost to the point of non-existence and features some of the worst collision detection I've ever come across, there are no sound effects and the music consists of about four ten-second loops of the sort of high-pitched "joviality" that could make a nun stab the Pope. But like I said: at least it's over with quickly. So long, ALF, and let's hope you stay in space, where no-one can hear you quip.
Posted by VGJUNK