Yee-haw, I suppose, because today I'll be moseying my way through Sunset Riders. Released in 1993 by Konami, Sunset Riders probably has the highest concentration of rootin' tootin' to be found in any SNES game, so saddle up as I discuss some of its finer points. Okay, I'm going to stop the cowboy talk now, I promise. 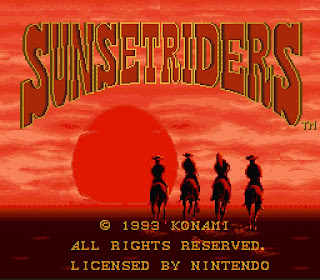 First of all, there's the classic Konami logo, glittering like a joyous beacon in the sea of dreck that made up eighty per cent of SNES titles, and always a reassuring sight. Then the title screen, complete with horses and chock-full of cowboy font. It's certainly a game that makes its intentions plain. There's a nice little cartoon intro sequence (with some excellent music) where our heroes are introduced, firing guns and generally acting Old-West-like. Steve the cowboy, Billy the cowboy, Bob the Cowboy and Cormano the Mexican all seem to have the shooting prowess; they also appear to be colour-blind, judging by their outfits which are all in the sort of migraine-inducing neon colours that ice-pops used to be before government legislation put an end to that sort of thing.

On to character selection, and there's only one choice: It has to be Cormano, and any other choice is wrong, wrong, wrong. Why? Because he's a bearded bandito-looking fellow wearing a hot-pink sombrero and poncho ensemble and carrying two shotguns. Honestly, I think you'd have to carry two shotguns to get away with an outfit like that. Cormano does also have the advantage of firing in a spread pattern, but that really is pretty low down on the list of reasons for choosing him. 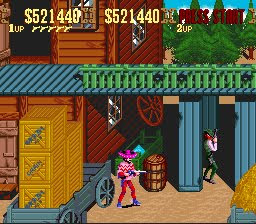 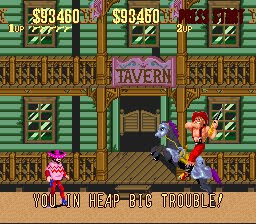 Our hero boards a train for level five. You have to have a train level in a western game: it's an immutable law, like the conservation of energy, or former Hollyoaks actors appearing in panto (I hear Jake Dean is great in Aladdin). After a lot of, well, shooting, along with admiring the excellent parallax scrolling effect, El Greco appears. Greco

reminds me rather a lot of Senor Ding-Dong from the Simpsons, and he gads about merrily trying to lacerate you with his whip and generally being an arse. He falls soon enough, and it's onward to levels six, which is a long climb up a mountain. And you know what this mountain has? That's right, lots of falling rocks, along with some very nice music, possibly the best in the game. At the top, Chief Wigwam awaits at an Indian burial ground (I've seen Pet Semetary, so I know what one looks like). Isn't being called Chief Wigwam like being called King Palace, or Duke Large Country Estate? Also, it's very difficult for me to not type Chief Wiggum every time I write his name. Anyway, as a boss, the chief is balls-out tough. Jumping around and throwing knives is his thing, and he's real good at it, as you will find out when you die here ONE HUNDRED TIMES. If you manage to defeat him, his sister approaches and begs you not to kill him because "he was only following orders". If I'd had the option, I would have told him it didn't excuse the Nazis so it sure didn't excuse him, and then blast him, but I guess Cormano is less of a sociopath than I am, so he lets him live and moves on to level seven. It's back on the horse for this level, and I'd like to take a moment to discuss the horse's colour scheme. A dark red horse with a pale yellow mane, neon pink saddle and reins and fluorescent green accessories? I'll just let you soak that in. 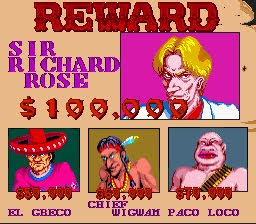 Still, Bob's horse is cream with a mint-green mane and, aside from making me want mint ice cream, is even further from the realms of possibility. The level itself is disappointingly bland and flat, and at the end what appears to be a shaven gorilla named Paco Loco awaits, sitting high upon his fortified wall, shooting at you with a machine gun while his associates throw grenades at. After Chief Wigwam's brutal assault, Loco is a bit of a relief, frankly. Several shotgun blasts and he falls to the ground, saying "Hasta la bye bye!" in disturbingly child-like voice. Well, look at that, you killed a retard. In your defence, he was trying to mow you down with a machine gun, but I doubt the jury will get past the “killed a disabled person" element of your trial. With that obstacle removed, you can move on to the final level.
Richard Rose is your target, and his picture shows he bears a disconcerting resemblance to Steve Buscemi. The level starts off as a fort, with a little bit of everything from the previous levels thrown in, and soon you reach the final area: Rose's Mansion. As with all good villains, Rose is English, greets you with a hearty "Cherrio (sic) Old Chap!" and promptly launches you into a bullet hell worthy of Radiant Silvergun. Yes, the screen is 90 per cent bullets at this point, with Rose actually aiming at you (as opposed to just firing straight forwards/upwards) and goons pouring in from every angle. Eventually the lackeys die away, and it's just you versus Buscemi. Then he hits you with a sliding kick, and you die instantly. The rage begins to mount. Death by bullet? Fair enough. Knives, bombs, fire? Fair enough. A fey Englishman gently sliding his loafers against my no-doubt incredibly butch ankles? You, sir, are a son of a bitch. Eventually, you'll do him enough damage and he'll fall. But what's this? He stands up and removes a metal plate from under his shirt. At this point, he's gone from son of a bitch to motherfucker. You go through the motions again, and this time he stays dead. His final words? "I say, bit of bad luck!". Oh Richard/Steve, I take back all the bad things I ever said about you. 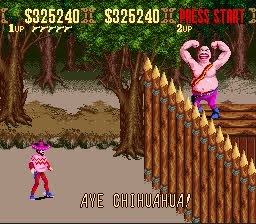 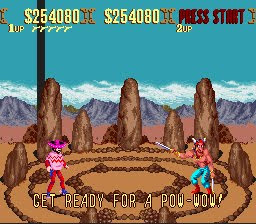 And that's the end of Sunset Riders! Your reward? A single screen that says "Congratulations! Good Job Podner!" That's it. I went through all that just to get one lousy congrats screen? And what the fuck is a Podner!? Goddammit all. 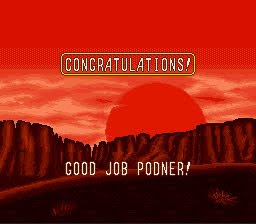 So, that's Sunset Riders. It's not a truly classic game; it has some problems with difficulty spikes and not being able to see enemy bullets and such, but it's done with huge charm in the graphics and music, the gameplay is solid and it's just good, old-fashioned fun, especially with a friend. Look it up some time. I hope you've enjoyed this little trip through the Old West, and I hope you'll join me next time, Podners!
Posted by VGJUNK