If you’re the kind of person that believes violence isn’t the answer, then I have just the game for you. I hope you’re good at trivia questions instead, because otherwise you won’t get far in SNK’s 1991 quiz-em-up Quiz Daisousa Sen – The Last Count Down. Also, you’ll be off my team for the pub quiz. 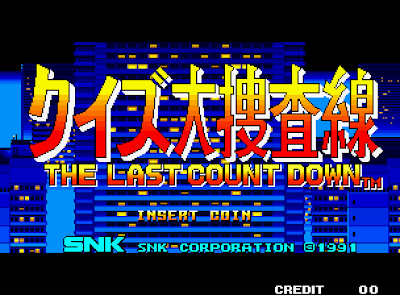 There’s big trouble in Quiz City, and only two men have the vast resources of pointless trivia knowledge required to save the day. These men are called Neo McDonald and Geo Kentucky (Not that they can spell their own names correctly or anything). 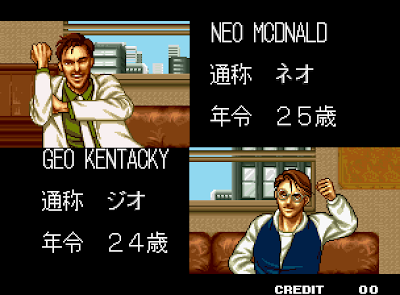 If you have a pop quiz, if no one else can help, and if you can find them, then maybe you can hire... The Quiz Police. I think they’re policemen, but as Quiz Daisousa Sen is set in some parallel universe where all interactions take place in the form of a quiz, the requirements for joining the force are somewhat different and training mostly consists of browsing Wikipedia for hours on end. 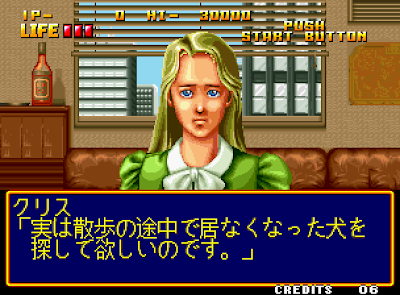 The gameplay of QD is easy enough to explain: as you’ve probably figured out, it’s a quiz game, an early-nineties video game version of the Who Wants to Be a Millionaire machines that litter pubs up and down the country. If you’ve ever played Quiz & Dragons on the Capcom Classics Collection, it’s exactly the same setup as that. You’re asked a question, and you have four answers to choose from. Your opponent has a bar with a certain number of segments, and each time you answer correctly, one of the segments lights up. Fully light up the bar and your opponent is defeated, but if you get it wrong, you lose health. There are a few extra complications, such as the occasional power-up with effects such as reducing the amount of options you have to choose from or allowing you to choose the category of questions. A few rounds make you press the answer button as fast as possible, and sometimes you have to reach a total number of points, and you can choose harder questions for more points. That’s really all there is to it. 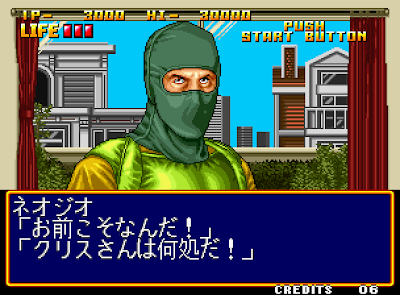 There are two plotlines to choose from at the start of the game, and that’s where I ran into a small hitch: the game is only available in Japanese, and I don’t speak Japanese. Therefore, I had no idea what the hell was going on, plot wise. However, judging from what I managed to piece together from the images flashing in front of my uncomprehending eyes, I don’t think knowing Japanese would lead to these plots making any more sense. Here’s a quick rundown of what I managed to decipher. 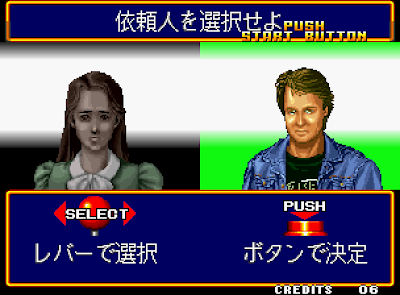 Plot 1: A girl contacts Neo and Geo, possibly about her missing dog. They find a man in a balaclava (who looks like a terrorist from SNK’s The Super Spy) in her house, and then they get arrested. They escape using the power of quizology. They take a plane to Hong Kong, easily getting past airport security despite being escaped felons. There they meet a robot, a ninja, some kind of criminal mastermind and another robot with the face of an old man. Old man robot explodes, they go back to the girl, who is in a graveyard. It all seems like a lot of work for a missing pet, but the girl seems happy enough. The end. 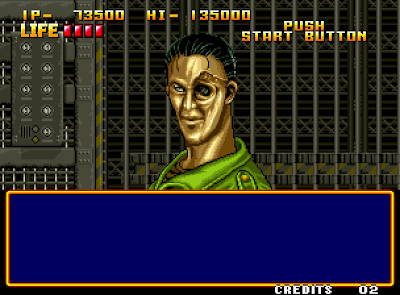 Plot 2:
This one makes far more sense. In a word, Zombies. In a few more words, Neo and Geo are kidnapped by a Mafia boss who dangles them over a shark-infested pool. They escape using the power of quizology. Afterwards, they head to another graveyard, completely ignoring the Mafia boss who tried to kill them with a shark. Zombies begin to rise from their graves, and Neo and Geo take refuge in a creepy house. I have a sudden urge to play Resident Evil, but it quickly passes. They leave and head for the police station, which has been overrun with zombies, who are in turn lead by a vampire. They meet a man in the cells who tells them a thing, and then they break into an installation of some sort. After battling various zombies, they reach their final opponent. It is the President of the USA, and he turns into Satan. They out-quiz The Adversary, and things return to normal. The end. 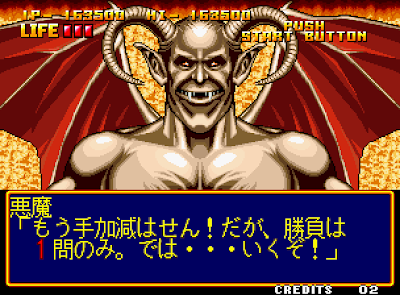 Now, that all sounds like jolly good fun, but that’s not why I played through a quiz game in a language I don’t understand. No, there’s a much better reason, and that reason is cameos by famous people! I say cameos, I mean SNK took their likenesses without asking. Let’s have a look at them, shall we? 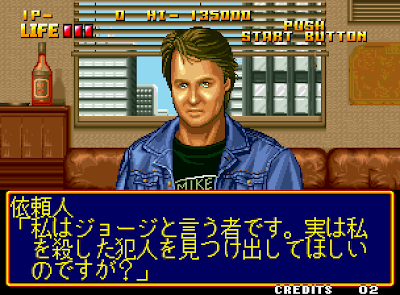 I noticed that when I chose Plot 2, Michael J. Fox appeared. In case you were still at a loss as to who this person is supposed to be, SNK kindly wrote “Mike” on his jacket. Obviously, once I'd seen Marty McFly here I had to work my way through the game and see who else was lurking within. 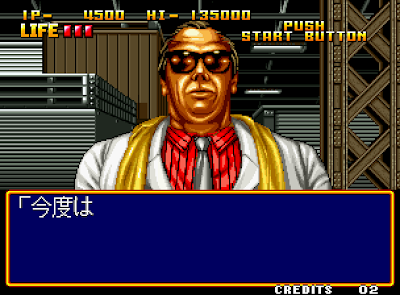 The Mafia boss with the shark is everyone’s favourite on-screen psychopath, Jack Nicholson. More importantly, he’s wearing a white suit with a red-and-black striped shirt and a gold scarf. Not many things could improve The Sopranos, but every mob boss dressing like that most certainly would. 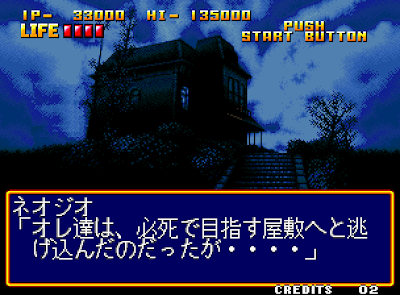 I would say that Norman Bates’ house isn’t a character, but I guess it’s as much a character as anyone else in Psycho. Just look at that pixel work. It's a thing of beauty. 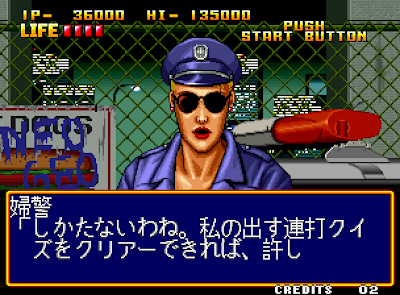 This police woman turns up in both stories. Two theories as to who she’s supposed to be: I reckon she’s either Lt. Callahan from Police Academy or Brigitte Nielsen. 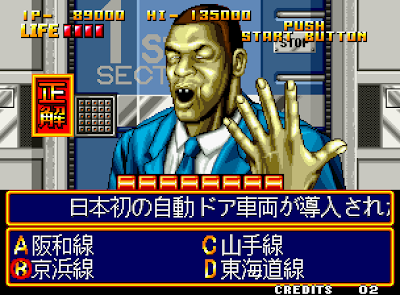 Zombie Mike Tyson, complete with gappy teeth. The “Unlicensed Mike Tyson Appearances in Videogames” Wikipedia page that I mooted in the Great Boxing Rush Up! article gains another entry. “Appears in Quiz Daisousa Sen. He is impetuous, impregnable, and also a zombie.” 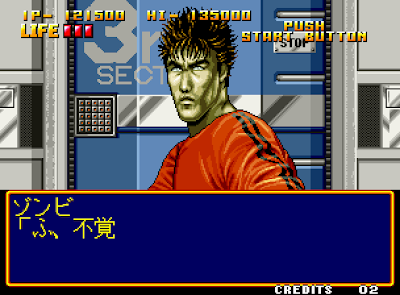 Not sure about this one. The hair makes me think of Kenshiro from Fist of the North Star, but I don’t think that’s it. He looks familiar, though. If you think you know who it is, then let me know in the comments. 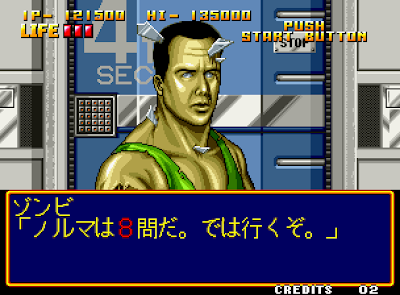 There’s so much glass! Bruce Willis appears in his guise as the iconic vest-wearing, terrorist-butchering, wise-cracking John McClane in his days before the curse of baldness took another brave soul away from us. 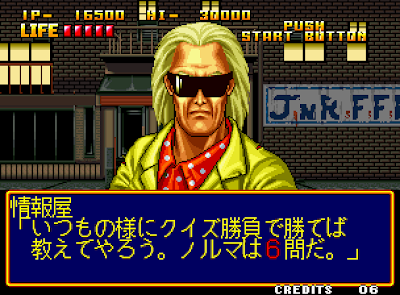 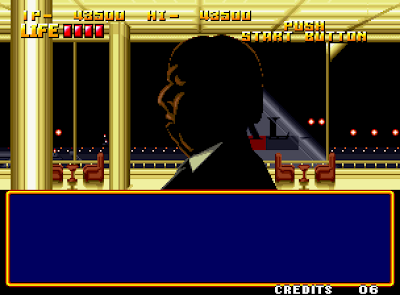 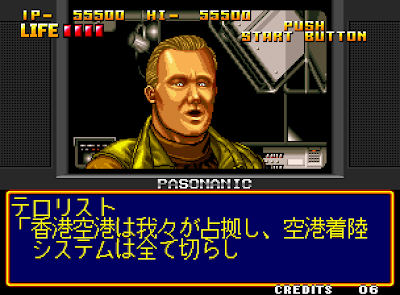 I struggled with this one, until I noticed his name is given as “Terrorist”. Then I realised he’s probably Colonel Stuart, the villain from Die Hard 2. Sadly, there is no Alan Rickman. 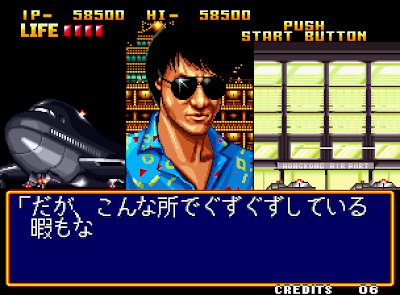 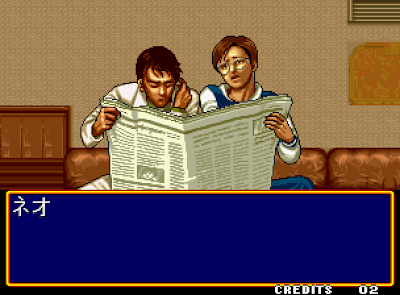 Quiz Daisousa Sen: The Last Count Down, then. Well, it’s difficult to say how good the game is due to my insistence on sticking with such a dead language as English and not converting to Glorious Japanese. That said, I like Quiz & Dragons. Quiz Daisousa Sen is almost identical to Quiz & Dragons, plus it contains Zombie Mike Tyson. I’m sure you’ll agree, that’s a big ol’ tick in the “solid design choice” column. I could talk about how the graphics are a good example of SNK’s huge, beautiful spritework, and that the music is pretty good too. But again, Zombie John McClane. Zombie John McClane. You can't argue with that.
Posted by VGJUNK