A couple of months ago, I introduced you to a parallel dimension of NES games: a mysterious otherworld where the Gods are kinder and The Shining has a videogame adaptation while Robocop 3 doesn't. Well, I just couldn't stay away, so here's some more licensed NES games that don't exist!

Night of the Living Dead 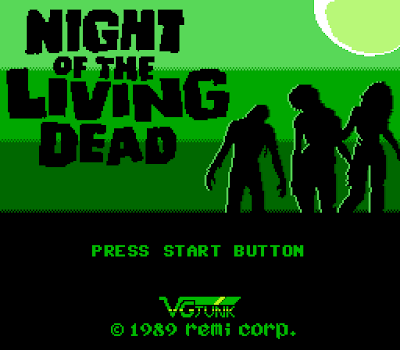 (Click for bigger)
George A. Romero. That man has a lot to answer for, not least for warping my youthful mind with the Dead series of films and the hundreds of imitators they spawned. It's okay George, I forgive you. Romero has had a few encounters with the videogames industry over the years, including a cancelled FPS based on his works. More importantly than that, he inspired me to create a whole host of alternate-future movie fantasies by directing a Japanese-only commercial for Resident Evil 2.

Romero. Resident Evil. A dream team, and for a time he looked to be a shoo-in to direct the first Resident Evil movie. Then Paul W.S. Anderson showed up and ruined the franchise for everyone by turning it into some odd Milla Jovovich fetish series. OKAY YOU CAN USE SLOW-MO WE GET IT YOU FUCKING HACK. And it could have been so beautiful, or at the very least not eye-gougingly, offensively bad.
Sorry about that. So, a Night of the Living Dead videogame. As far as I'm aware, it's never been made into a videogame, probably because standing around in a house arguing isn't the most thrilling of gameplay styles, but also because that ending is a serious downer, man. Given how hard NES games are to complete, imagine if after all that effort, you got the ending of Night of the Living Dead in pixellated cut-scene form. Talk about a kick in the balls. 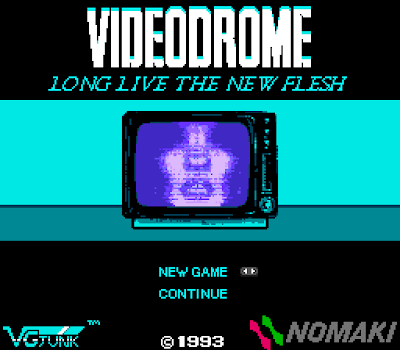 (Click for bigger)
A personal favourite film of mine, and another that has never been turned into a videogame. Why? Because the publishers were worried about people shoving the cartridges into fleshy orifices that have suddenly appeared on their torsos. I know they say there's no such thing as bad publicity, but that's not going to look good when you're taken to court.
But what would a Videodrome game play like? I honestly have no idea. The way licensed characters were often shoehorned into settings that bear only the most tenuous of links with the source material, Videodrome: The Game would probably be a Contra-style run-and-gun game, with a tiny James Woods sprite shooting floating televisions with his nightmarish (and gooey!) biological hand-gun thing. Soundtrack provided by Debbie Harry!
Duck Soup 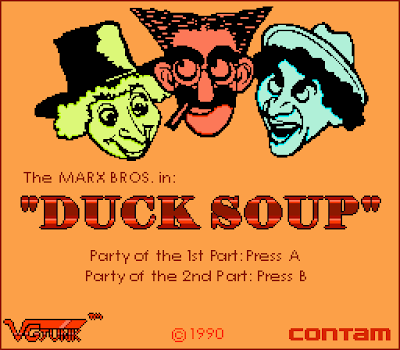 (Click for bigger)
Three words for you: Spy vs. Spy. If there was to be a Marx Brothers game, that would be the perfect gameplay style for it. Pick one of the brothers and attempt to steal Freedonia's war plans while the other two try to stop you by setting traps around the place. Aaaand now I'm a little sad that this game doesn't exist. Honestly, the Marx Brothers would have been a perfect match for the NES, but I guess videogames that are both hilarious and a pretty damn fine satire of war and jingoism just don't resonate with the videogame-buying public, you bunch of philistines you.
P.S. I know the "Contract" skit isn't actually in Duck Soup, but I couldn't not use it. 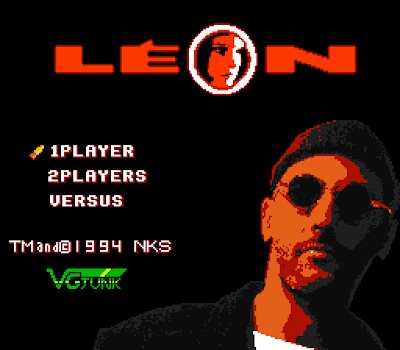 (Click for bigger)
A true masterpiece of a film, with the ability to make even the manliest of men break down in tears. Combine that with most NES games having difficulty levels that cause bitter tears of rage, then this is a game that might well lead to dehydration, a need to replace lost salt and looking like a total wuss. I'm a little surprised that, given the film's cult status, there's never been a videogame adaptation: I guess it's just one of those things that we should be glad and give thanks for.
Gameplay wise, I think it'd work well if it was in the style of A Boy & His Blob. A Hitman & His Small Girl, if you will, with Mathilda performing various actions depending on which type of milk you give her to drink. Have Léon's health be represented as a pot plant whose leaves fall off as you take damage, throw in some digitised speech from Gary Oldman and you're on to a real winner. 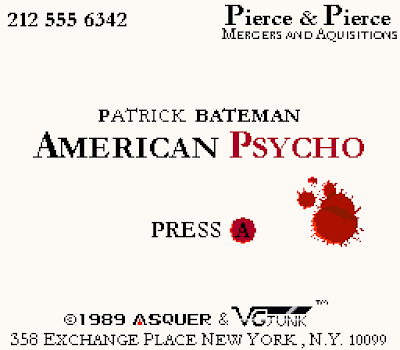 (Click for bigger)
This game would be a rhythm action game, like an 8-bit version of Gitaroo Man. No, wait, bear with me. You have to press buttons in time to chiptune versions of 80's new-wave classics such as "Sussudio" and "Hip to be Square". Perform well, and Patrick Batemen successfully has sex with prostitutes and hacks douchebags to death with an axe. Seriously, if you have any talent for programming games, please get this made. 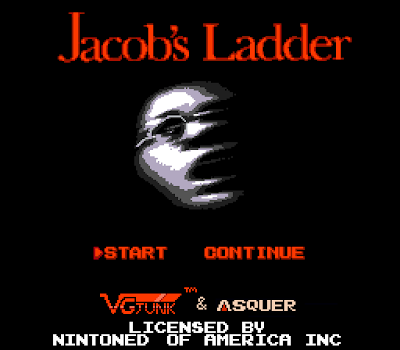 (Click for bigger)
There already is a Jacob's Ladder videogame; it's called Silent Hill 3. Okay, maybe not, but SH3 takes an undeniably large chunk of inspiration from Adrian Lyne's film. In fact, I guarantee that there's a post on a message board somewhere where someone claims that "Jacob's Ladder ripped off Silent Hill 3". That's the gameplay, then; a NES version of Silent Hill 3, but with the added complications of minigames where you have to sort mail into the correct pigeonhole or repeatedly hammer the buttons to avoid dying of a fever. Free LSD sample included with every purchase!
Nosferatu 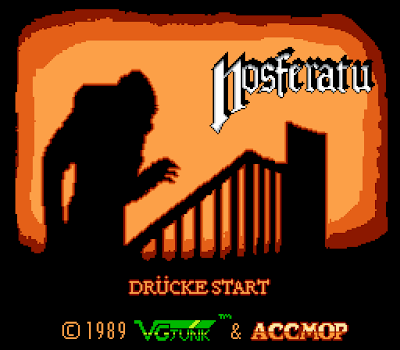 (Click for bigger)
The oldest film on this list, which is pretty impressive when you think it also includes Duck Soup. Personally, I think the cinema of German expressionism is sorely overlooked by videogame developers: there's not even a game adaptation of Metropolis, for pity's sake!
Do you remember Night Trap for the Mega-CD? I know you remember the furore over nothing that surrounded its release, but do you remember the actual gameplay? No, of course you don't, because it was boring as sin. It essentially amounted to watching utterly unexciting footage of girls in a house that you had to save from intruding vampires by pressing various buttons to set off traps. Now, imagine that premise, but with a creepy German vampire leering over the comely females. Then stop imagining it, you pervert. Still, a game where you play as a vampire and lure victims to their grisly fates could be pretty cool.
There actually is a game based on Nosferatu, made in 1994 for the SNES. It's an clumsy Prince of Persia ripoff, but at least it looks nice. Nice for the dungeons of a vampire's castle, I mean.

And there you have it, seven more NES games that don't exist. It's probably for the best, apart from that American Psycho one. Somehow I can't see it appearing on WiiWare.
Previous LICENSED NES GAMES THAT DON'T EXIST
Also, SILENT HILL 2: NES EDITION
Posted by VGJUNK