Forget World of Warcraft or Team Fortress 2: did you know that way back in the mists of time, people in Japan could play videogames online... using their MegaDrives? Well they could, and it was almost certainly a better experience that modern online gaming because your opponent couldn't send you a message calling you a "fagget spammer jew n00b". You could also download games, and here's one of them - it's Sega's 1991 timewaster Paddle Fighter. 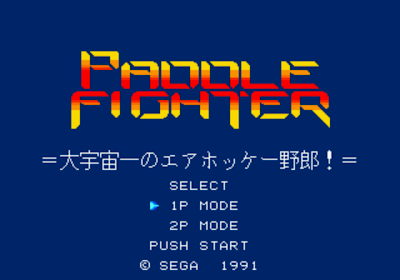 A hush falls over the arena. The crowd nervously clutch their betting slips in their sweaty fingers as the two competitors enter. The combatants take their places; the atmosphere grows charged, electric. The audience know something special is about to happen, something that will live on long after they're dead, told and endlessly retold in epic tales of sporting combat. The plucky young contender picks up his paddle with one hand and reaches into his pocket with the other. Then he puts 50p in the slot and they start playing air hockey. 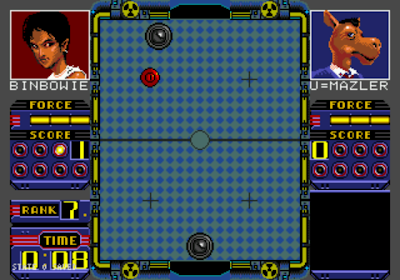 You play as an androgynous, elfin man-woman called Binbowie, a rookie air hockey player with a pocket full of arcade tokens and a heart full of dreams. I'm going to refer to Binbowie as a "he" just for the sake of consistency, although that might well be wrong. Judging by those ears, he might be one of the fairy folk; I can only hope he doesn't turn me into a toadstool or something for disrespecting his ancient race. I have no idea what the plot is, it being in Japanese and all, but given that binbou in the Japanese for "poor" I'm going to assume that Binbowie is a David Bowie impersonator who has fallen on hard times and need the air hockey tournament's prize money to get his life back on track.
Once you've chosen to start the game, you're thrown into an air hockey battle with your first opponent:

U=Mazler might look like a badly-typed insult from an internet forum somewhere, but it's the name of your first opponent. An anthropomorphic camel in a shirt and tie, he grew up living in the shadow of his cooler older brother Joe Camel. While Joe Camel made a fortune advertising cigarettes to children, U=Mazler struggled to earn a living playing competitive air hockey, the bitterness and shame twisting him into the borderline psychotic that he is today.
Actually, now I look at him again he looks more like a kangaroo. Well, there goes my elaborately-crafted backstory. 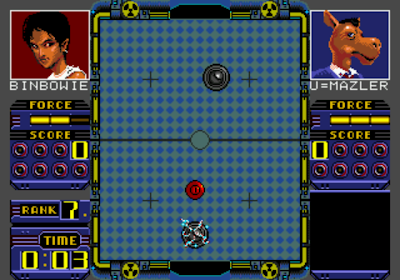 So, air hockey then.You've got a paddle, and you have to knock the puck into your opponent's goal. First person to seven points wins the match. But wait! Even by the standards of the early nineties that would have been considered pretty fuckin' slim pickings, gameplay wise, so there are a few extra complications. One is that for every minute played, the goals get a little wider. Honestly, it's a pretty decent mechanism that forces you to work harder as the match progresses.
You also have two power-ups that you can use up to three times during the match. One is always the same - it creates a barrier across your goal for a while, which is nice. The other one seems to be random, changing between matches, and it has various effects. You can make the puck multiply, make it disappear, charge it with electricity so it paralyses the other paddle or even summon a picture of Binbowie wearing a clown nose that floats around, distracting your opponent. Unless your playing against the computer, of course: the machine doesn't give a fuck if you're dressed like Kaptain Boffo. That is why the machines are superior to us: the ability to remain unfazed by the sudden appearance of clowns.
Once U=Mazler is defeated, it's on to the next chump. And here she is!

O=Imoko is a strange gypsy lady who, judging by that smile in her picture, really loves air hockey. Like, "sneaks in at night and licks the paddles" loves it. I'd stay away from her if I were you, Binbowie. She's also got the power to make her face appear and float around the table, getting in your way. 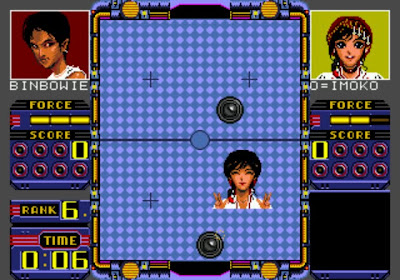 Well, that's just bloody charming. Still, she's easy enough to overcome, even with her dark, soulless eyes peering deep into the furthest recesses of your mind. Next up is this jolly fellow:

Manian10 is an insect of some kind, except, you know, advanced enough to want to play air hockey at a professional level. He's got a trick up his sleeve (carapace?), too. 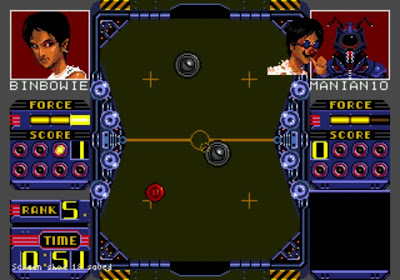 A table with angled sides! Surely against the rules of the Intergalactic Air-Hockey Association, but Manian10 gets away with it because he's a giant space bug. You can piss him off if you want; personally I'd prefer to not have him insert his parasitic larvae into my face.

Next is Ponk=0=2. That's quite a name. Anyone who played a lot of Golden Axe will recognise the strange decision to include an equals sign between the character's names. In fact, if you did play a lot of Golden Axe then you're probably thinking "DEATH=ADDER" right now. I always assumed it was just an affectation used to make the names look cooler, and it is, but there's more to it than that. Here's an article from the often-entertaining Back of the Cereal Box with a more in-depth look at the "equals" phenomenon.
You maybe have noticed that Ponk=0=2 is a robot. That's because Paddle Fighter seems to be a game about air hockey that just happens to be set in the distant future. Obviously, normal air hockey is dreary as sin and not worth the time and effort of making a game about it, but futuristic air-hockey? Sign me up for that shit right now. In fact, I'd like to see more arcade games set in unusual time periods. How about a version of skeeball set during the Vietnam war, where you have to roll hand grenades into a Viet Cong foxhole? Or Crusades Whack-a-Mole: bash the pop-up Saracens with a Bible on a stick.

Next up is Otomisan, a woman who appears to be part-way through her assimilation into the Borg. She got half-way through reconfiguring her body with biomechanical implants so that she could join a vast, interconnected consciousness and then stopped for a while to play some air hockey. 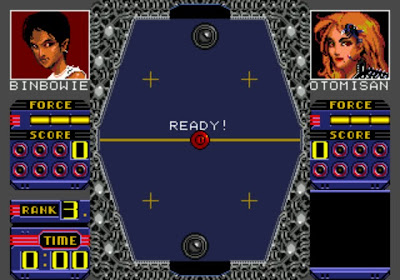 She's also got an oddly-shaped table, this time somewhat coffin-like in its design.
Next!

G=Mamius is here, and he looks booored. He's a green alien guy with a mohawk and a soul patch, and he seems to be regarding you with ill-concealed disdain. He's probably pissed off that he spent several thousand years in cryo-statis, travelling across the universe as everyone he ever knew and loved died, only to reach Earth and find out that all anyone gives a shit about is air hockey.
It's not even great air hockey, either. The main point of air hockey is to beat your opponent by twatting the puck across the table as hard as possible and then sheepishly going to collect the puck as it flies off the table and lands next to some dead-eyed chav sitting at a fruit machine. You can't do that in Paddle Fighter, because you can't get the requisite amount of force, and therefore future air hockey is inferior to our current air hockey technology.
Another thing is the sound effects: for me, the defining characteristic of arcades isn't the various bleepings of the videogames, the sound of someone trying to surreptitiously thump the coin falls or even people's incredulity at how many tickets it costs to get even the most basic of prizes. No, it's the thwinck thwinck thwinck sound that air hockey tables, proper air hockey tables that aren't in space, make. That sound isn't included in Paddle Fighter. In fact, I'm fairly certain it's impossible to replicate, as though the brain cannot hear it correctly unless you're standing in a leisure centre or a seaside amusement arcade.
Oh, and the music? There is one track that plays during gameplay. It's a thirty-second loop of the most inane plinky-plonky crap I've ever heard. Hopefully, with the aid of this powerful anti-psychosis medication, I will one day manage to forget it.

Your final opponent is P=Master, ancient master of the mystical arts of air hockey, and a proper nightmare to defeat. Despite his status as the final boss, he's got a surprisingly boringly-shaped table. 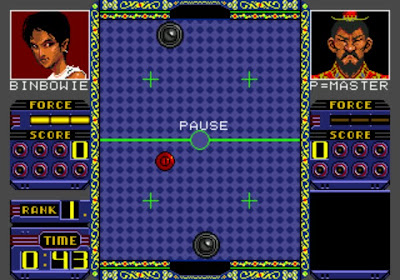 Be prepared for your encounter with this guy to last about the same amount of time as the rest of the game combined. Perhaps his giant ears give him some kind of radar-sense, allowing him to predict your every move. Luckily, I am a pathetic shell of a man who has nothing better to do than put in the time required to defeat him. Your reward: well, you get a bit of a text crawl that I'm sure is telling you that congratulations, you are the new champ. Yippee. 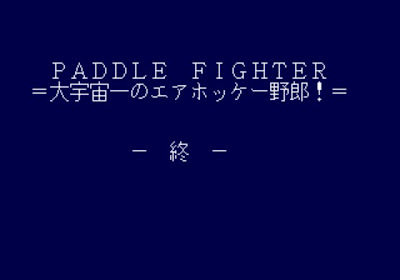 I think that says something about being the number one air hockey player in the cosmos, a title with the same cachet as "world's tallest midget".
And that's Paddle Fighter. If you're really desperate to play a videogame version of air hockey, then this will do, I guess. The physics are decent, and there's a two-player mode. Just make sure you turn the music off: I don't want to feel responsible for a rash of Paddle Fighter-related suicides.
Posted by VGJUNK