Everybody likes ninjas. Conversely, no-one likes clowns. So, if you combine the two you should get something that is the very essence of averageness, right? Well, let's find out by playing Incredible Technologies' 1991 circus of horrors, Ninja Clowns. 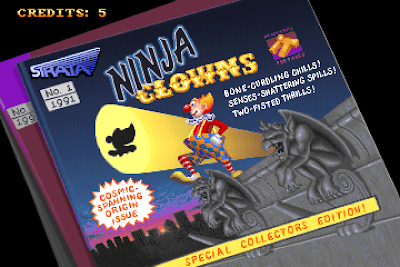 Yep, this game is called Ninja Clowns. No, I have no idea why they chose to combine ninjas and clowns. Ninjas are stern, silent, invisible warriors who have been trained to kill without mercy. Clowns are jolly, noisy, gaudy fools who have been trained to kill without mercy. There's not much overlap between the two, is there? Well, it doesn't matter, because Ninja Clowns has nothing to do with ninjas at all. Just clowns. Clowns only. Clowns, clowns, clowns. Ugh. The only reason they called it Ninja Clowns is because Clowns is a very dull title.
Ninja Clowns is a side-scrolling beat-em-up, so the first thing to find out is why, as a simple jester, you have been thrust into this world of violent madness. Kidnapped daughter? Animals in danger? Well, not quite: 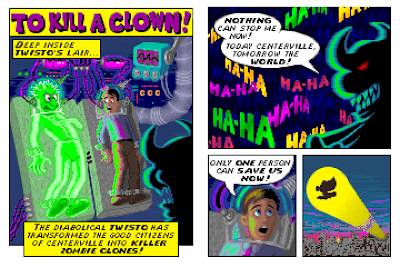 Nope, today's reason for punching everything in sight is Killer Zombie Clones, produced in a lab by Twisto the Evil Clown. I don't know why I specified that he's an evil clown; he's a clown, it should be taken as read that he's also evil.
The terrified populace's response to this threat? They summon another clown. You know, like the one that's kidnapped them. Maybe they know that, like ninjas, only a clown can defeat a clown. Although on closer inspection of the villain's silhouette, it appears he's not a clown and he's actually Bowser. I have my fingers crossed that this is the case and his evil plan is actually some complex plot to kidnap Princess Peach. 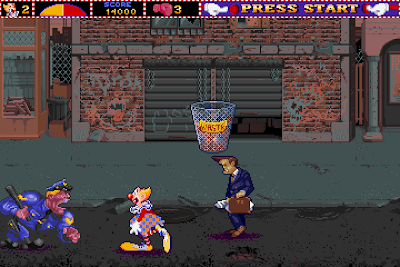 You're plonked in a dismal street area, with various scumbags for company. As this is a beat-'em-up, you're probably going to want to, you know, beat 'em up, and that's where things get a little tricky. Ninja Clowns has a strange control system in that, unlike almost every other side-scrolling beat-'em-up, there's no jump button. You've got punch, kick and what I think is supposed to be a block but which can't block atacks. Pressing punch and kick together lets you spin around, which is simple enough, but other combinations lead to ever-more unpredicatble results. P+K and left or right makes you do a flying kick, diagonal-down and K makes you roll around, there's a strange jumping move where our hero tries to climb an invisible rope... There's a lot going on, and while it sounds like a good thing to have so many moves, they all feel very counter-intuitive to use, and you keep performing them by accident, not helped by the jerky animation and general feeling of distance between your input and the actions of the white-faced freak you're "controlling".
As you can see, the enemies are a motley bunch, and the first stage is mostly filled with angry cops who throw doughnuts at you and 80's business men who you can pretend are Patrick Bateman. Quite why Twisto wants to take over this town is beyond me, because it's a bit of a shithole. The first stage flies by quickly, with two interesting things to note: One, you can collect a boxing glove on a spring to use against your foes. Anyone who has ever watched a Looney Tunes cartoon knows that a boxing glove on a spring is the deadliest weapon in the universe. The power of a thousand gods courses through your veins as soon as you collect it, and no man can stand against its awesome power. Secondly, Ninja Clowns appears to have pre-empted the pop-culture shitecloud that is the Twilight series by a good fourteen years: there's a sign in the background for a movie called "Dead Teens In Love". There is no possible way it could be worse than Twilight. 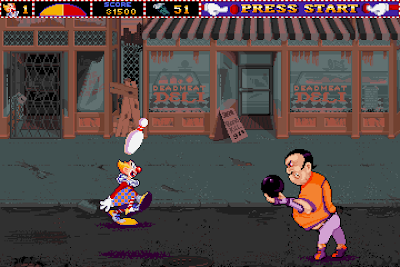 Soon you're fighting the boss, who is pictured above. He's a bowler, and he likes to bowl things at you and... that's about it. He's significantly more difficult than the rest of the stage, but once he's defeated, you do get the pleasure of seeing him explode in strangely grotesque manner: 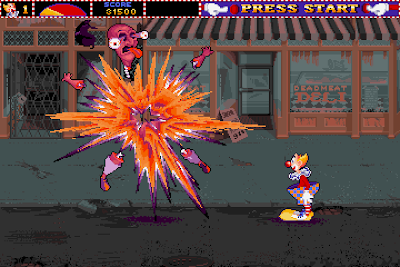 Look at that goddamn clown, watching a man explode with a calm smile on his face. The sick fuck.
After that, there's a brief interlude where you have smash up a lab in an impossibly short time limit, although it's only for points so it doesn't matter. Twisto appears again to curse you. His silhouette looks more like Bowser than ever. 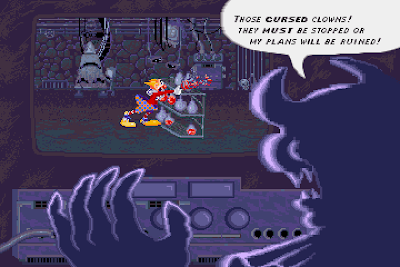 The next stage takes you to the funfair... of TERROR. That's to be expected though, because funfairs exude terror in the same way that girls who wear berets exude insanity. 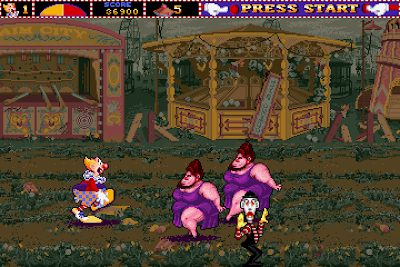 New enemies abound, including bearded ladies who projectile vomit at you. At least I think they're bearded women, but then again there's nothing to say that they aren't just very nauseous transvestites. There're also Elvis impersonators. They've got accordions, you know, just like Elvis was famous for playing! Most importantly, there are mimes. Mimes that can be punched. Indeed, you are encouraged to punch them because they drop health when you do. As I may have mentioned before, attacking a mime is a rare pleasure that should be savoured like a fine wine, and by including this feature Ninja Clowns has earned itself a gold star.
There are a few more weapons to collect, including (of course) throwing pies and (of course) seltzer sprayers, which is nice. Something that isn't nice is the music, which mostly consists of "circus music" set to grating, painful beats that sound like a calliope being forced to breed with a trash compactor. It's a shame I didn't know about it in time for the Hallowe'en playlists, really.
So, what will the boss of the carnival stage be, do you think? Samson the Strong-man? Siamese twins? Jojo the Dog-Faced Boy? No, no and no. 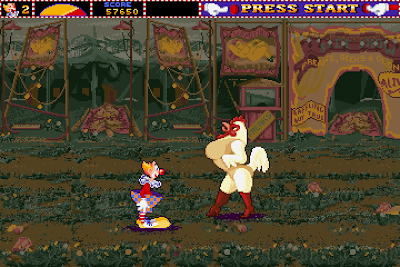 The boss is a chicken in thigh-high kinky boots and with a rack that makes Kelly Brook look like a twelve-year-old boy. It is, I fear, supposed to be a Sexy Chicken. Welcome to Nightmare Town! It gets worse, though. This Sex-Chicken has to attack you somehow. What's that you say? It could use eggs to attack? Why, of course it could! 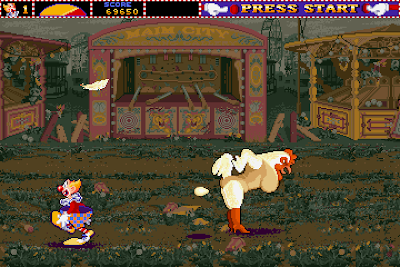 OH SWEET JESUS.
Yes, the slutty hen bends over and fires eggs out out it's... area at you. Even worse, the best time to attack the chicken is after it has bent over but before it fires the egg, so you essentially defeat it by repeatedly jamming your fist/foot up its exposed cloaca.
I don't think I'll ever feel clean again. If you manage to interact your fist with the chicken's arse enough times, then you move onto stage three.
Stage three is back on the mean streets, by which I mean the exact same mean streets as stage one, because they just reused the backgrounds. I guess after Sexy Chicken they were too traumatised to come up with anything else. Nothing much is new apart from some different enemies, mostly skinheads and (surprisingly powerful) Girl Scouts. The boss is... 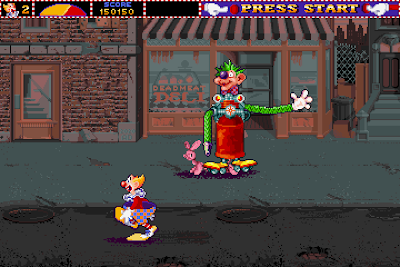 I have no idea what the boss is, or rather I do, but I'm not sure I understand why. He's a roller-skating helium canister with a severed head placed on top as a grisly trophy, and he attacks with balloon poodles. After the last boss, he's almost comforting. 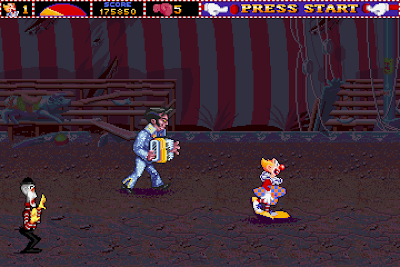 The next stage is set in the Big Top, and the punishing circus music is back with a vengeance. It's mostly filled with earlier enemies, although there are some midget clowns for those of you with coulrophobia and achondroplasiaphobia to enjoy. The boss is a rather mundane-looking magician: 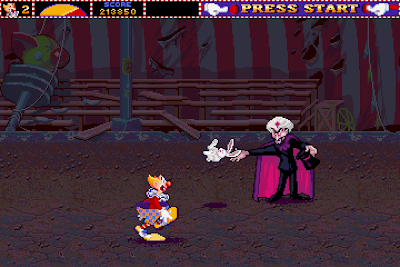 I do like the expression on that rabbit's face.
The next stage is on the streets, again, and they've used the same background, again. 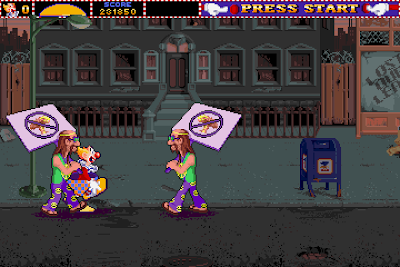 It really does count against Ninja Clowns that're you're just replaying the same stage. I think I'm going to have to rescind my gold star. New enemies are in the form of hippies this time, and they shout such well-known hippy catchphrases as "Wow, man" and "Woodstock, man"; you will tire of this very quickly. The first time I saw their placards I thought it was a picture of a chicken, and they were protesting against the Sexy Chicken. Just as I was about to embrace their cause, I realised it was a mushroom cloud and I started punching them instead. They're pretty violent for pacifists, and quite hard to beat. They killed me a lot, which means this is a good time to mention our hero's death pose:

He may be dead, but his enormous erection will live on! Maybe he's thinking about Sexy Chicken.
The boss approaches, and he's a more old-fashioned kind of nightmare fuel. 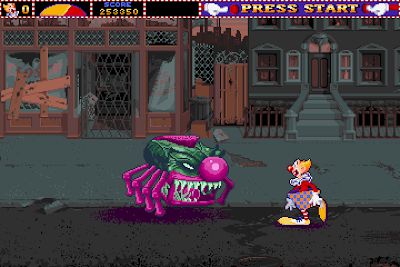 Cabbage/bagpipe/clown interbreeding has reached a terrifying new level! Our hero actually looks genuinely pleased to see it, though, and that's possibly because he already knows that once defeated, the boss will turn out to be full of popcorn. Of course. 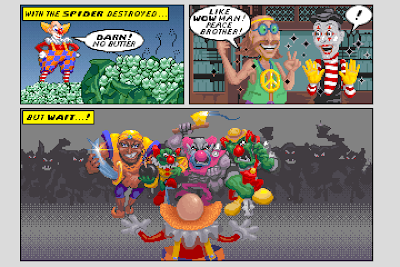 "Darn! No butter." Wait... were you going to eat the popcorn out of the dead spider-monster's skull? Clowns, everybody. Look upon them and know true fear.
Ninja Clowns is heating up now, and it's onto the final full stage: the Funhouse. 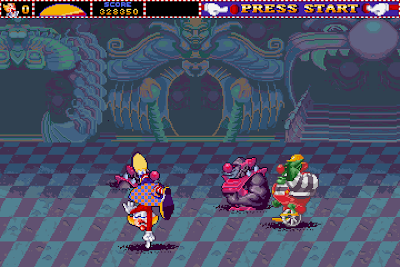 The name "Funhouse" is as misleading as you might expect. It's a constant, groin-crushingly tedious stream of unicycle-riding killer clowns, and the best way to defeat them is to keep doing the spin move repeatedly as they slowly haul themselves out of the floor. The blue-and-orange checks on our hero's trousers, much like the midday sun, should not be looked at directly. Serious eye damage will occur.
There was a boss here, a burly Sinbad type with a scimitar, but I defeated him so quickly that I forgot to get a screenshot. Oops. Anyway, he was just the warm up! It's time for the final showdown with Twisto! 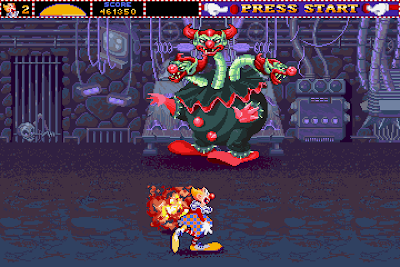 His lack of resemblance to Bowser is bitterly disappointing. That said, I actually really like his sprite, and if you're looking for a fearsome end-of-game boss, a three-headed demon clown is a good choice. He really isn't that tough, with the spin move once again proving the most effective method of killing clowns. That's information that may well come in handy one day. Once he's defeated, Twisto is revealed to be a tiny little clown who was using some kind of super-suit or something, and our hero defeats him by using the famous "hold them at arm's length so they can't reach you" technique that is so beloved of older brothers the world over.
So, Twisto goes to jail, and you can settle down for the long and satisfying ending sequence. 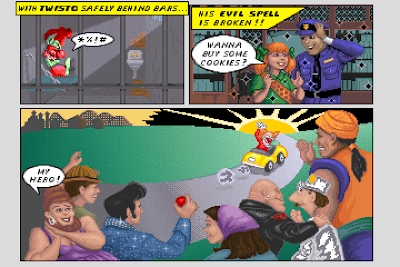 Oh wait, that's it. One still frame. Thanks, Incredible Technologies. The name of your company is a holow mockery, if not a downright lie. Twisto's spell is broken, and everyone is happy and friendly once more. Except the hippies, who will no doubt be continuing with their campaign of harassment against poor, defenceless nuclear power. And what the hell is going on with the sky in that last panel? I think the sun saw the clown driving toward it and turned off all the lights so he could hide.
Welp, that's Ninja Clowns. An odd game, to be sure. Not a good game: the controls are to imprecise, there's too much repetition and the music is too dreadful for it to be considered good. But there are some nice ideas in it, and a few nice graphical touches. I think it's main problem is that is didn't go far enough in embracing the horror element of the game. If the whole think had been some kind of Lovecraftian, Sexy Chicken-filled constant nightmare, it'd have been... better. It's pretty short too, so if you're interested, give it a quick go: you'll probably be able to complete it in half an hour. Just don't expect anything even vaguely ninja-related.
Posted by VGJUNK