A quick one today, as I look at some of Capcom's more regrettable Street Fighter cover art.

Let's start at the beginning, shall we? Here's the box art that was used on home computer versions of the original Street Fighter: 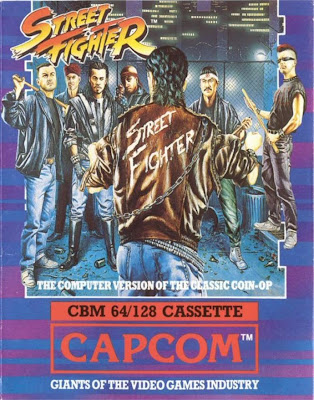 Okay, maybe I should cut Capcom some slack on this one, as they probably didn't have much to do with it, which is appropriate as this cover has nothing what-so-ever to do with Street Fighter. I assume the fellow in the middle who has proudly emblazoned the game's title on his back is supposed to be Ryu. It must be in days before he started his quest to become the greatest fighter, back before he gave up his original dream: to star in a production of West Side Story.
I like the punk on the far right, who in some alternate universe might be Birdie. He's one nonchalant son of a gun. I also like the fact that Capcom have described themselves as GIANTS OF THE VIDEOGAMES INDUSTRY. No false modesty here. Or modesty of any sort, really. 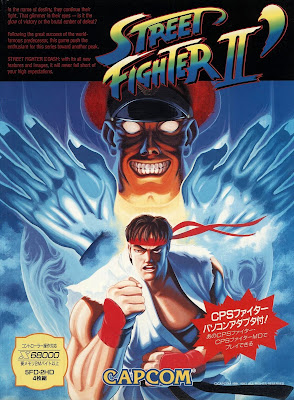 Not too bad at first glance, but take a closer look and things start to fall apart. What's going on with Bison's chin/neck area? Everytime I see it, the first thing I think is that he has an inflatable throat pouch that he uses to attract frogs. Frog which he then mates with. I think it's supposed to be a giant chin, but it definitely looks more flabby than anything else. The less said about his hands the better, other than the fact that they're not attached to his body in any way.
Then there's Ryu. Here's a close-up of Ryu's face. 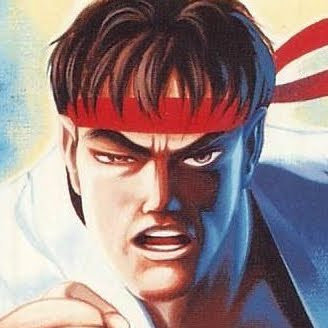 Ryu is stoned out of his fucking gourd.

SF2 Turbo now, and it doesn't look too bad: 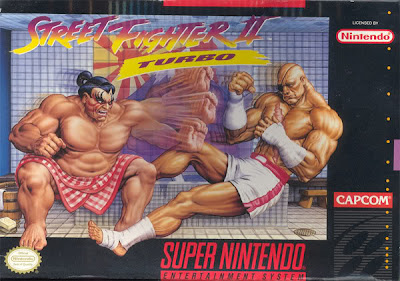 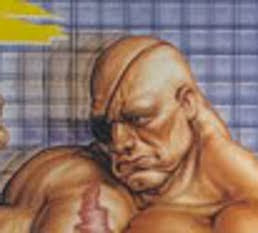 He's not angry with you, just very disappointed. There, there, Sagat, don't cry.

Here's the cover for SF2: Championship Edition for the Megadrive/Genesis. Take a good look at it: 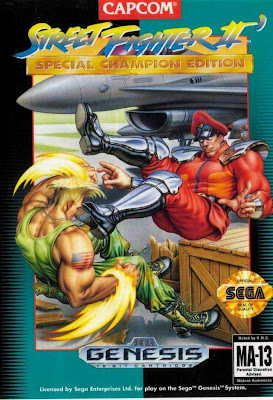 Now imagine there's a man just out of shot yanking a rug out from underneath Guile and Bison. I think you'll agree that the composition makes a lot more sense now, especially if you imagine that they're both shouting "Oh shit!"

Street Fighter Alpha, and yet again it is Bison that's the focus of our attention: 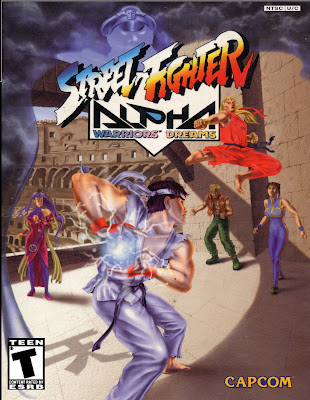 Spectral and marshmallow-y, that's how I always remember the leader of Shadaloo. Ryu's hadoken pose isn't much better, looking like he should be making a straining "hhhhnnngg!" noise as he attacks. What are all the other fighter doing there, anyway? Haven't they got anything better to do?

I've save the bworst 'til last. That's right, bworst. You see, this picture is both so awful and so glorious I had to invent a new word to describe it. Behold, the cover for Super Street Fighter 2 Turbo on the Amiga CD32! 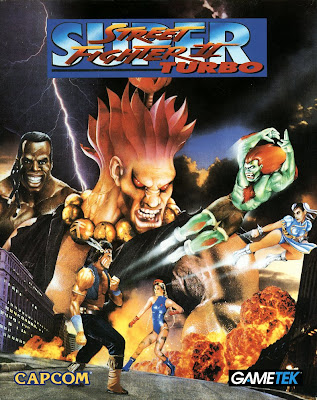 Jesus, I don't even know where to start with this one. Oh wait, yes I do: Akuma's giant deformed head. He has two tomatoes for eyes. His neck is a veiny, David Cronenberg-esque bio-horror. He has no hairline: his hair seamlessly appears as a gradient on his head. Just look at the anatomy between his ear and the back of his neck: it's comprised of the kind of non-Euclidean angles that would make even Lovecraft shudder.
Of course, Akuma isn't the only thing wrong here. Due to the lights shining out of their feet, Chun-Li and Blanka appear to be flying away from the center of the screen. I'm pretty sure that was not the intended effect. Chun-Li appears to have been replaced with a man in drag. Deejay looks like he's not even supposed to be in the picture, and he's grinning uncomfortably as he realises someone's taking a photograph of him. Then there's Cammy, poor, poor Cammy, her body mangled and twisted and badly retouched until her neck has disappeared and her head barely balances on her shoulders. Finally, EXPLOSIONS. Kids love explosions! My brain hurts. This picture is quite possibly the Grand Key, the instrument that finally unlocks the gates between all dimensions, reducing the universe to unceasing chaos. Don't stare at it for too long.

Thankfully, Capcom (and games companies in general) are at lot better at this sort of thing now.
Posted by VGJUNK