VIDEOGAMES ARE BAD FOR YOU (ACCORDING TO THEIR ADVERTS)

You young whippersnappers with your web-enabled bulletin board systems and smartphone social media hashtags, you should be more grateful about how easy it is for you to learn about the latest exciting videogame releases! In my day, our only sources for game news were that kid at school who swore his uncle worked for Nintendo and magazines. A magazine is a bunch of paper with words and pictures on it that's been stapled together, you see...
Okay, okay, that's enough fake curmudgeonliness. We all know about videogame magazines, and we all know that they had a lot of advertisements for new and upcoming games in them. Bafflingly, one of the recurring themes of these adverts, particularly in the 16- and 32-bit era, was that videogames will mess you up and merely playing the game that's being advertised will lead to social isolation, permanent injury or even death. That doesn't seem like a good way to sell your product, but what do I know? There's probably a reason I don't work in advertising. Here are just a few examples of videogame ads that promise nothing but pain and misery, roughly sorted in order of how traumatic the experience will be for the player. 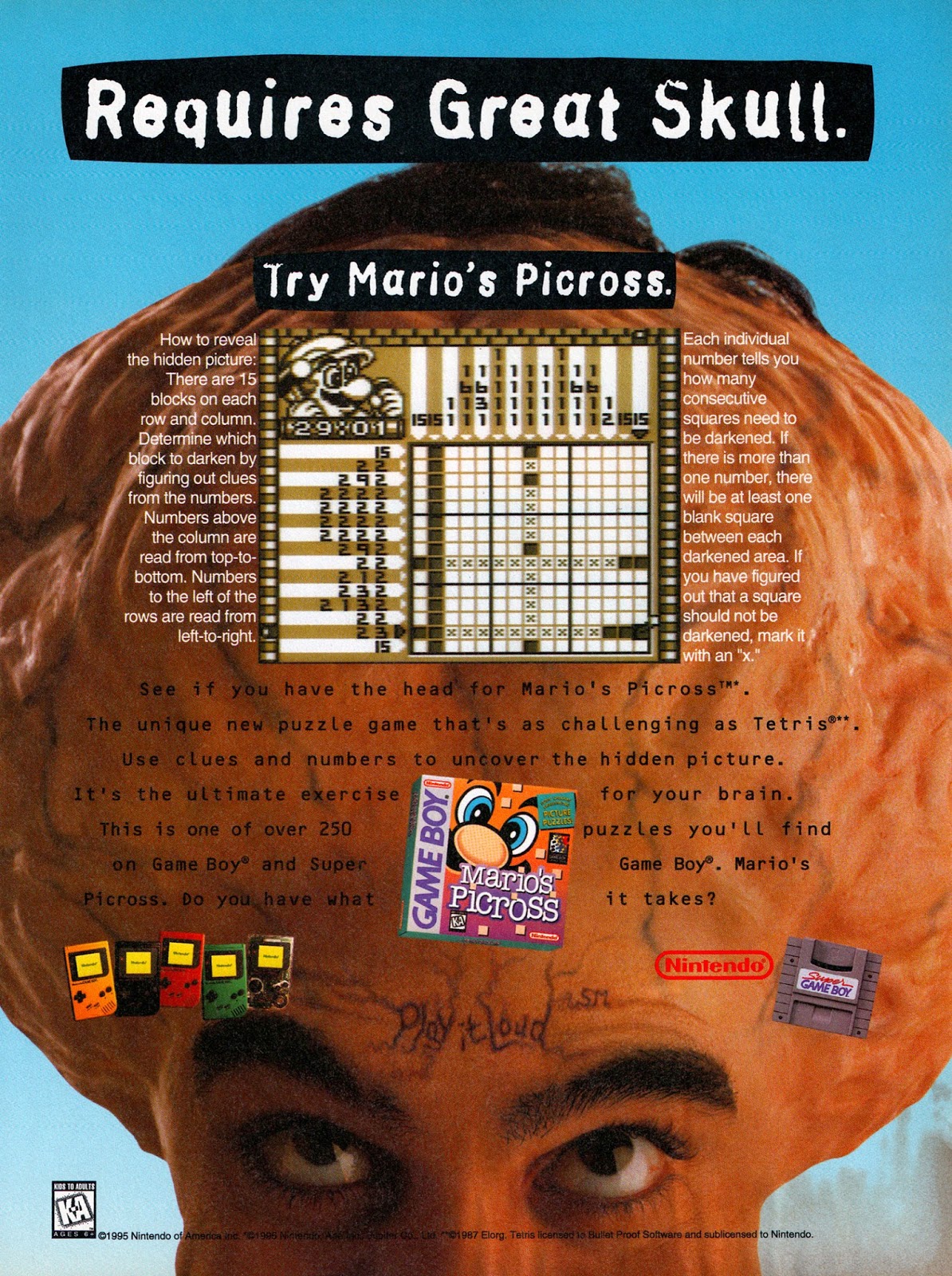 I'm starting with this one because it could be interpreted two ways - you either have to have a head shaped like a giant's scrotum if you want to be good at Mario's Picross, or playing Mario's Picross for long enough will turn your skull that shape. The reality is that neither is true, because I played a whole bunch of Mario's Picross and my head was / is a relatively normal size - although my hairline is admittedly getting close to the one depicted in this ad. 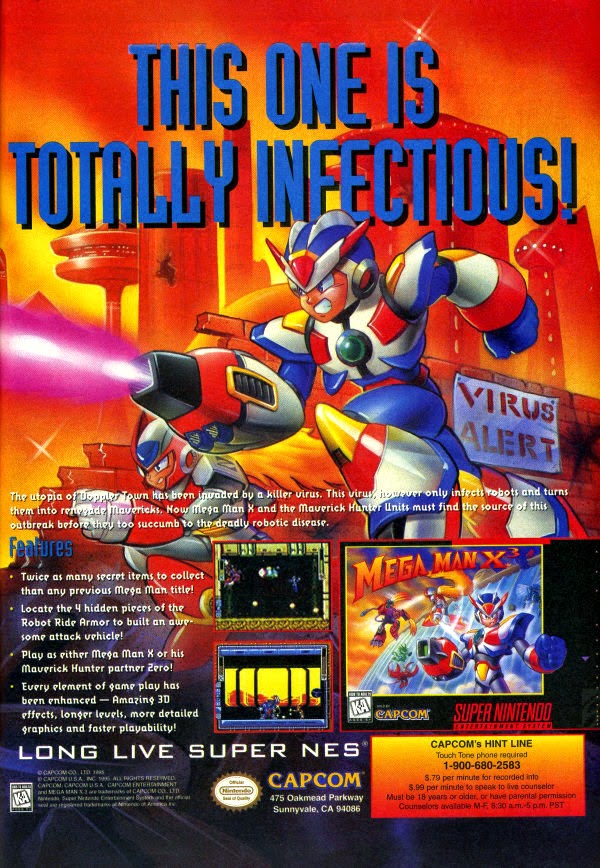 "This one is totally infectious!" the advert screams, and I can't vouch for anyone else but I always mentally append "like herpes or ebola!" when I see it. This one can be explained by the whole "computer virus" element of Mega Man X3's plot, but still, I can only imagine that tagline as something really worrying to hear your doctor shout during an examination. 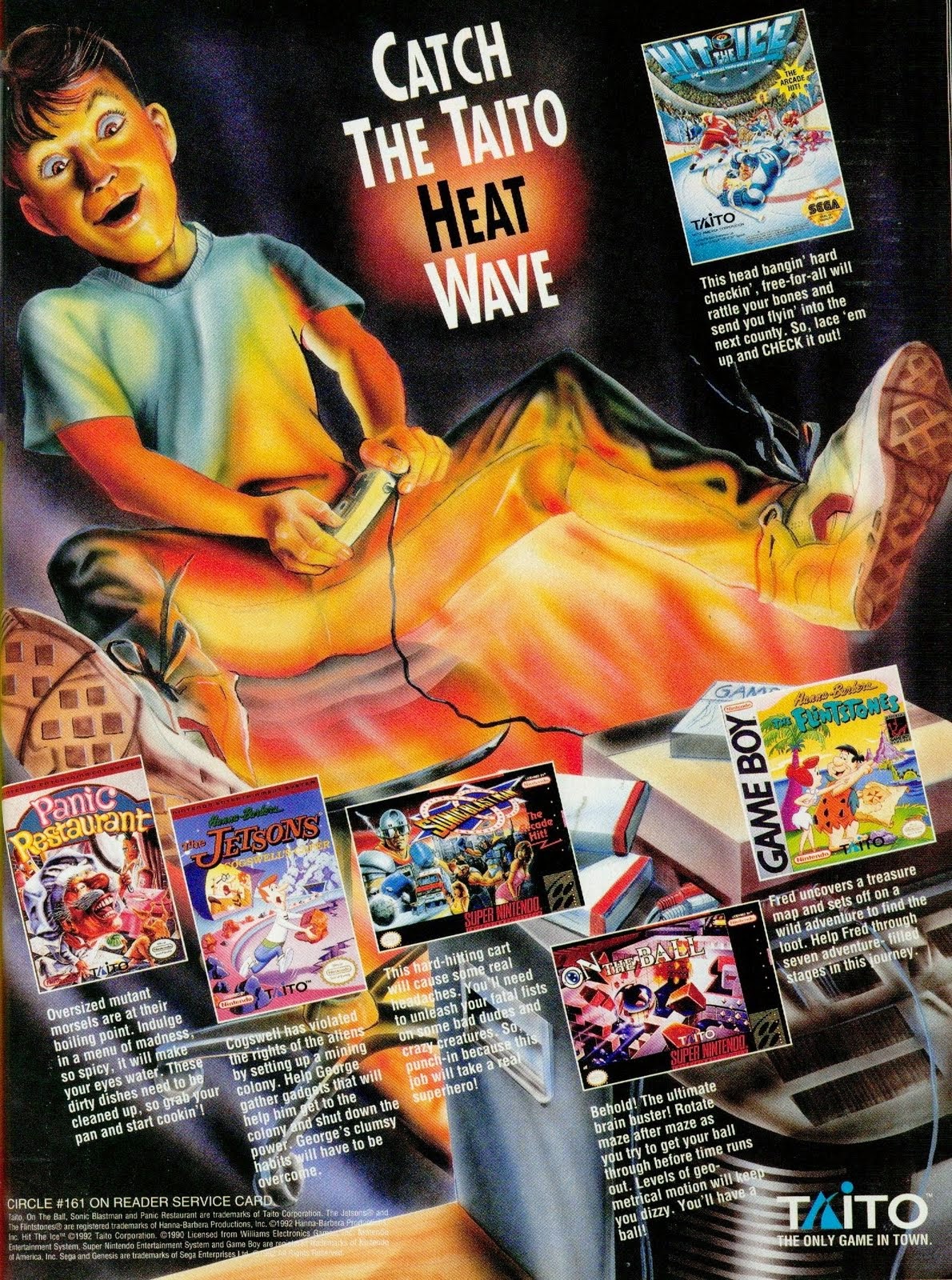 Catch the Taito heatwave! Catch its powerful radiation right in your crotch, rendering you sterile for the rest of your life!
Imagine if you went over to a friend's house and they were sitting in that splay-legged position while they played their NES. Yeah. 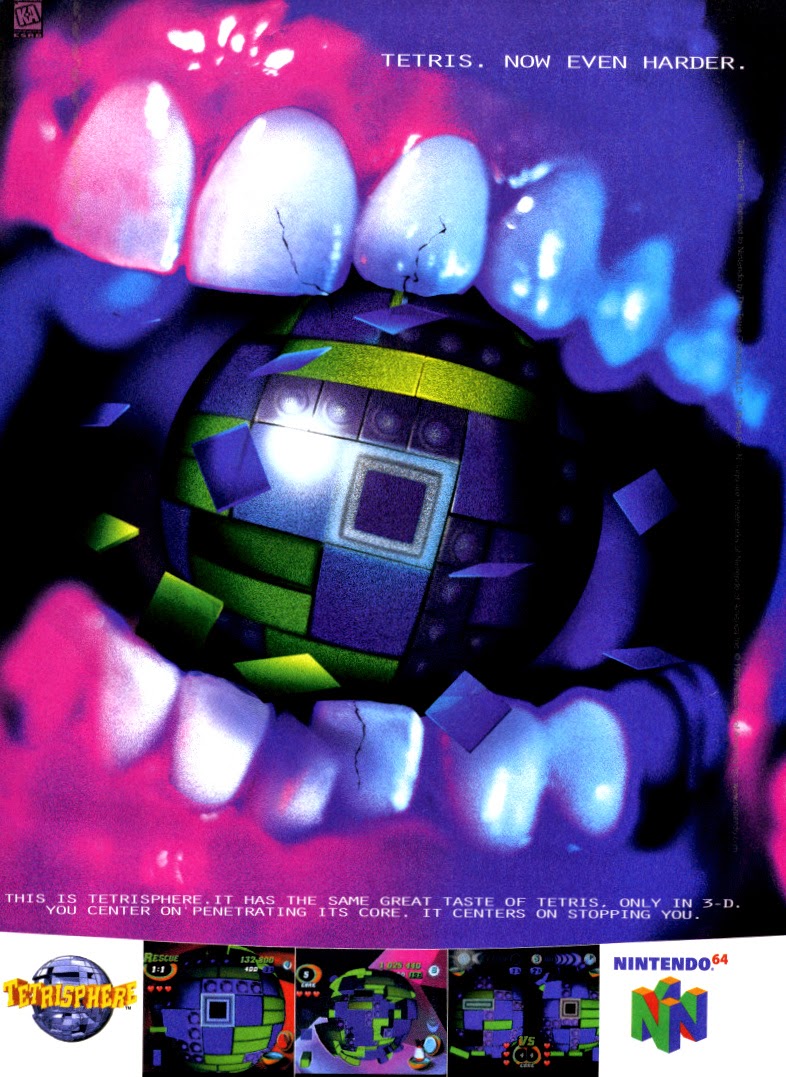 Ooh, tooth damage, nice. Everyone's favourite bit of unsettling dream symbolism can be achieved in your waking hours through Tetrisphere - but only if you roll Tetrisphere into a ball and bite it, a scenario that's unlikely to occur if you play Tetrisphere according to normal operating parameters. At least the design process for this one makes sense: "Tetrisphere, it's a sphere, and the game's hard, so it's a hard sphere... like a jawbreaker! Now I'll just edit some cracks onto this picture of some teeth and hope it doesn't make anyone who's putting off a trip to the dentist feel really uncomfortable." 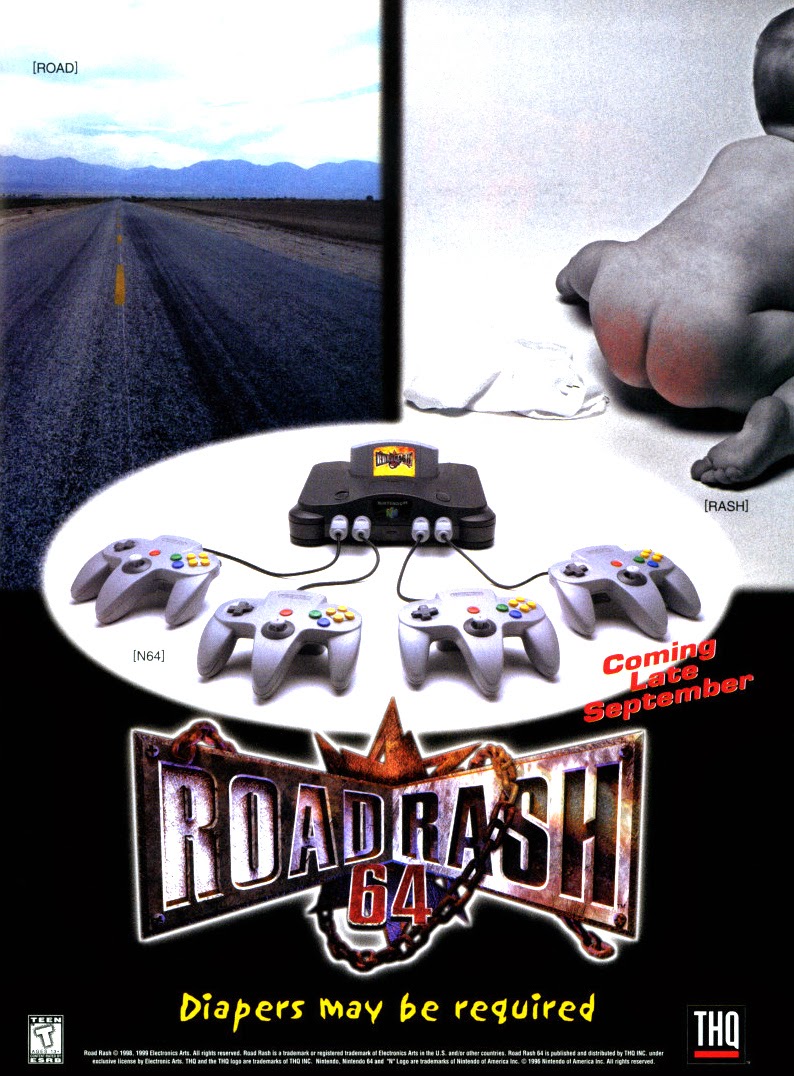 Playing Road Rash 64 will make you shit yourself. Here's a tip - unless you're a brand of laxative, don't imply that using your product will cause the consumer to lose control of their bowels. Maybe THQ also own a company that make adult nappies and this is textbook example of vertical integration.
Somewhere out there, there's a kid of around fifteen years old whose bare arse was used to promote a videogame about motorcyclists beating each other up. Sometimes the unfathomably bizarre nature of humanity's existence can feel almost overwhelming, but then I think about said kid's friend mocking him after finding out about his "modelling" career and everything seems right with the world. 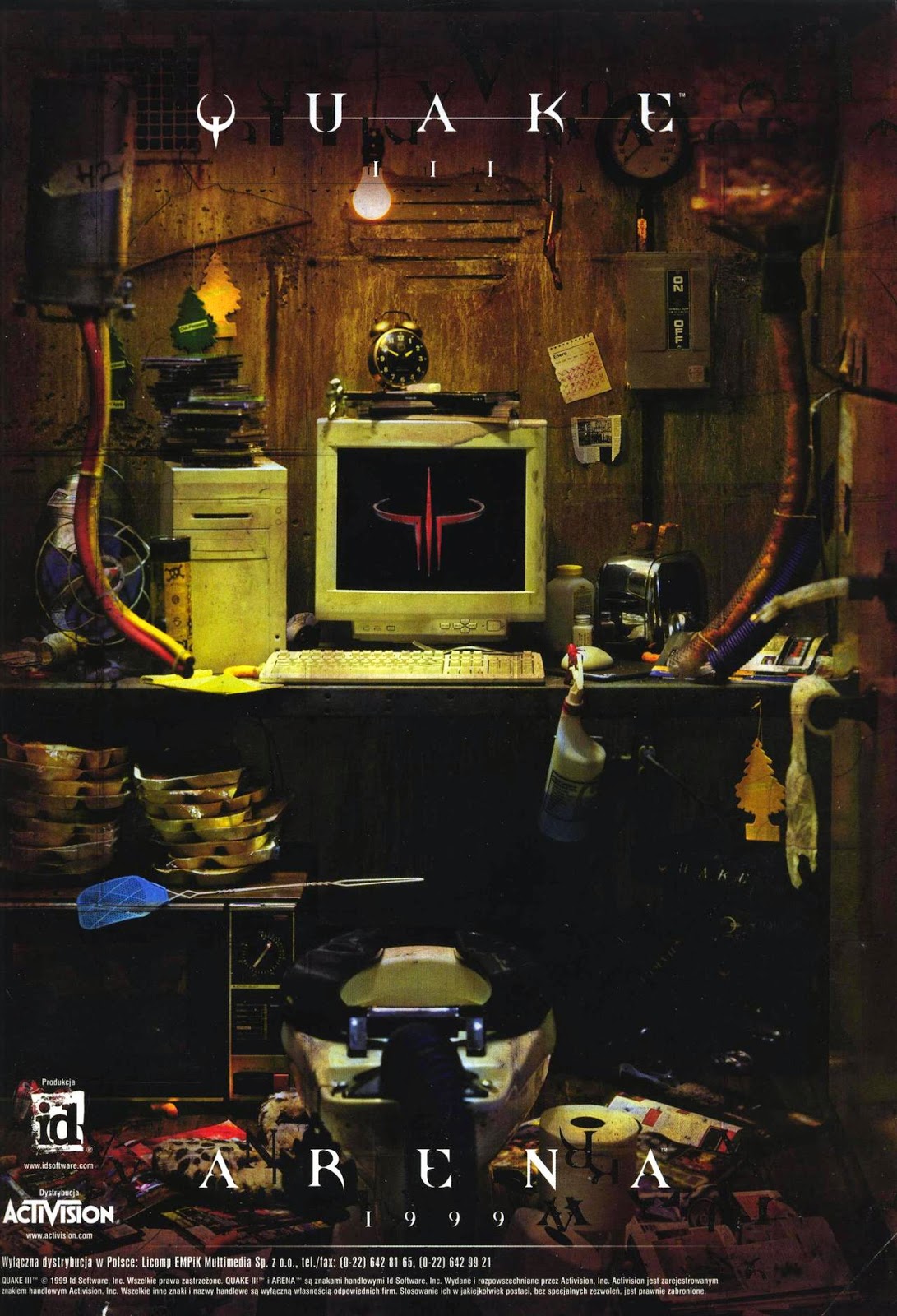 Now we're getting to the really unpleasant stuff, with the implication that playing Quake III will end up with you either living in a filthy basement or being trapped in some kind of Saw-esque torture game - you wasted your life playing Quake III, now you must play Quake III for your very life! If you fail, you'll be sucked down this toilet. I like that this advert shows the foulest, filthiest basement pit, the owner of which is forever sitting on a porcelain throne and masking their hideous odours with car air fresheners, but they still have a spray-bottle of glass cleaner handy. Can't let my 14" CRT get mucky, it might interfere with my pro gaming skills! That's a nice touch. The nicest touch of all is that there's a toaster next to the computer. I am seriously considering getting a toaster to put next to my computer now. 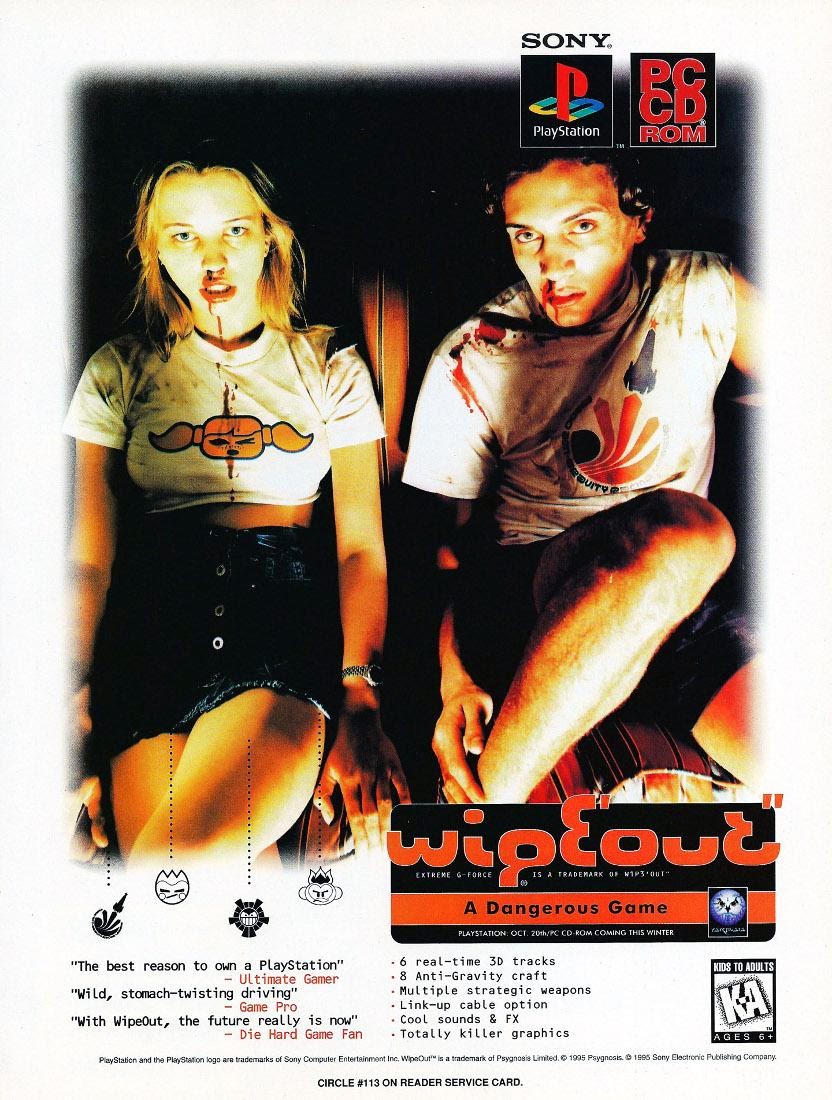 Wipeout will slap you around a bit, give you a bloody nose, that kind of thing. As a kid I always thought this ad had an undertone a drug abuse to it, what with the nosebleeds, the glassy-eyed stares and the PS1's demographic shift to older consumers and their subsequent embracing of the "lad culture" scene. I'm not sure why I headed towards this conclusion when sure physical violence is a more obvious answer - perhaps it was because I'd played Wipeout and it didn't seem impressive enough to warrant this kind of marketing. It's no F-Zero, that's for sure.
On a happier note, this is an ad that implies that girls can play videogames too. That kind of thing was not common in 1997. Sure, playing Wipeout might leave you looking like you fell face-first into a pile of rubble, but it's equal opportunity brutality! 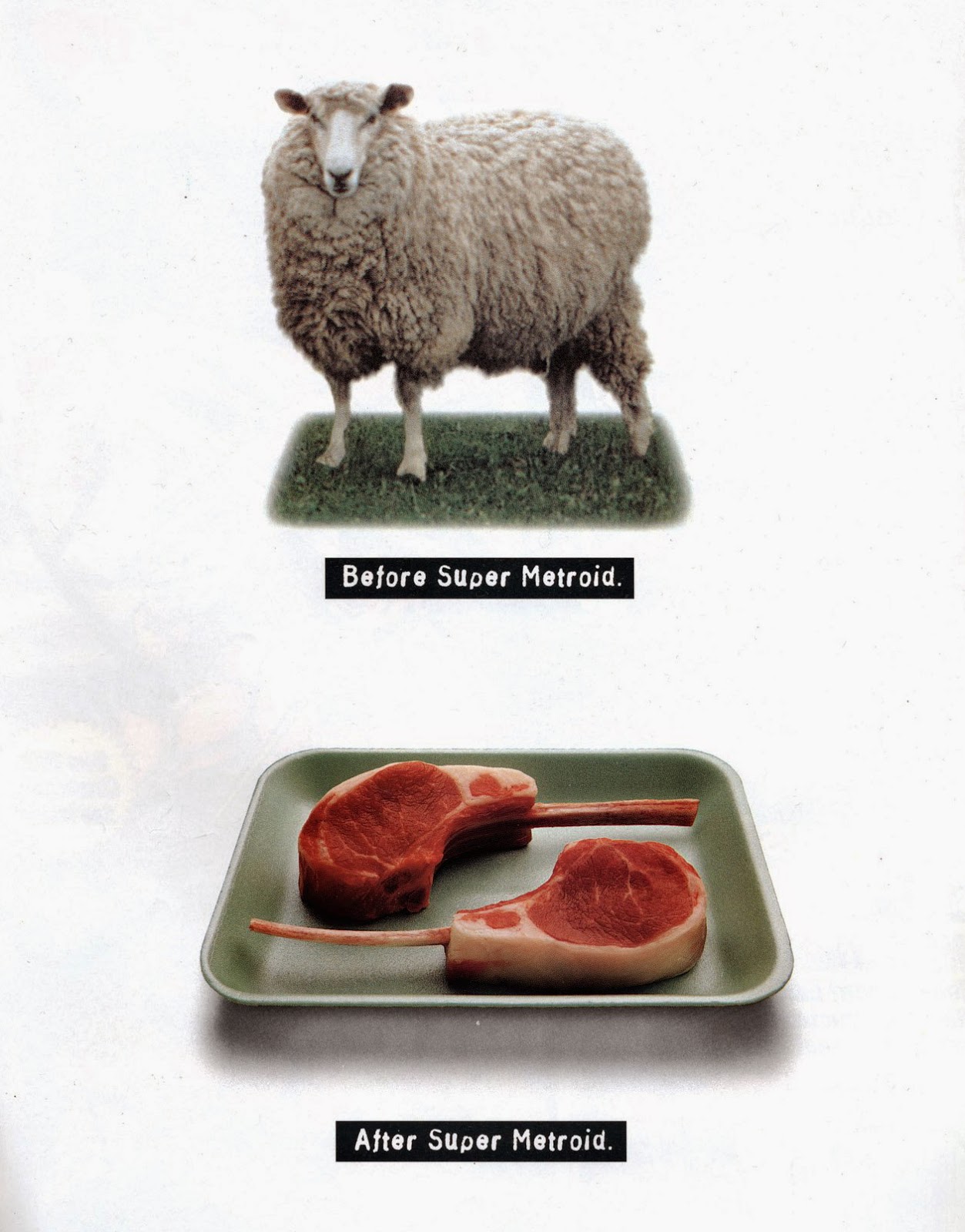 This game will kill you, butcher your body and sell the meat for consumption. Only if you're a sheep, mind you. Humans will just get to enjoy a first-rate SNES adventure. Nintendo's anti-sheep bias could have backfired, but sheep possess neither the intelligence nor the opposable thumbs required to start a letter-writing campaign so the Big N just about got away with it. 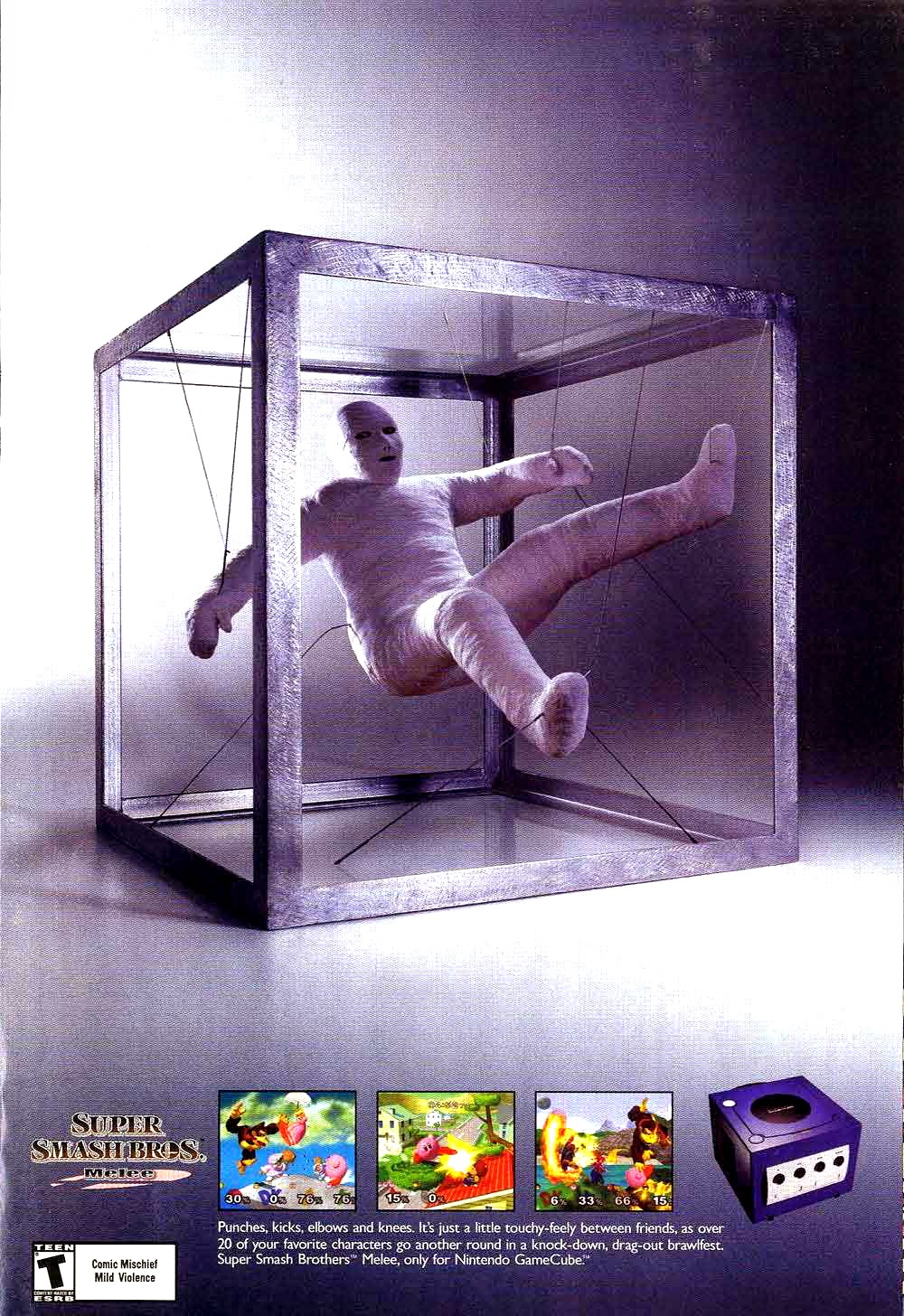 Not only will playing Smash Bros. Melee break every bone in your body, it will also send your shattered form to a cenobitic dimension straight out of the Hellraiser movies where you'll be suspended from wires in a formless grey void for all eternity. That is not a fun situation. All I can take away from this is that playing Super Smash Bros will lead to Bad Times. Not for the guy in the Cubic Prison of Eternal Agony, though. He loves what he has become. 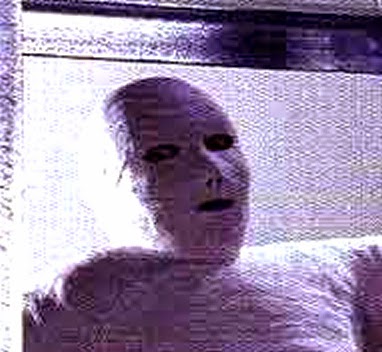 "My suffering will be legendary, even in the Mushroom Kingdom!" 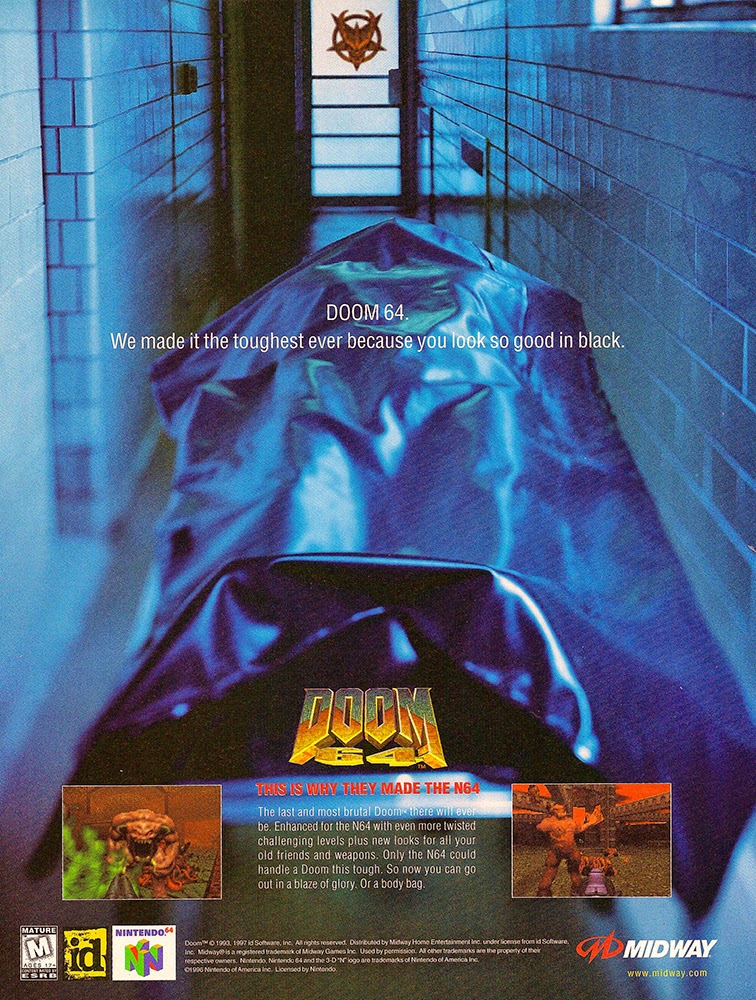 Doom 64 will kill you. You will die if you play it. Buy Doom 64. It's not just that it'll kill you, but that the developers specifically made this game so that you'd end up in a body bag, and you know what? This ad is fair enough. It's Doom, and if any game was going to kill you it'd be Doom. I know I for one am quite likely to die while playing Doom, but admittedly that's because I spend so much of my time playing Doom. It's a simple statistical probability at this point. 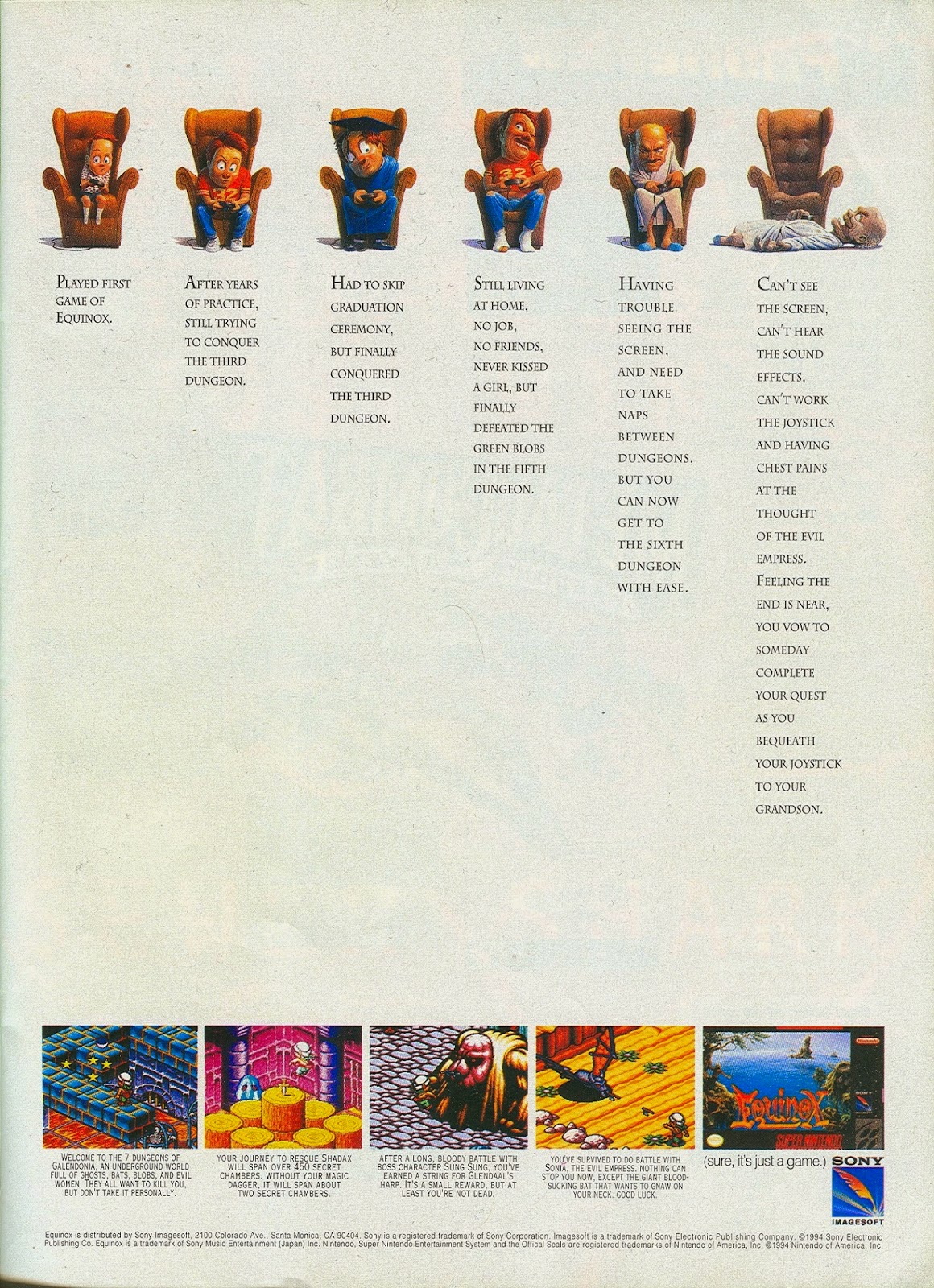 We've seem some ads that promise discomfort, some that promise serious physical harm and even some that promise death, but this ad for Equinox goes way beyond that. If you play Equinox, this advertisement says, your entire life will be a meaningless waste of human potential, completely devoid of experience or growth or even love - there is nothing but the game. The game strips away every aspect of your life until your frail body finally gives in, but even then you are not free and your last action is to pass this terrible SNES-based curse onto a young relative so that the cycle may continue. You will die alone and unfulfilled, never even having completed the game you sacrificed your entire life to play. That's Equinox, out now for the Super Nintendo, get your copy at your nearest Toys 'R' Us store!

So, why did so many advertisers want you to think that playing their videogames would leave you a broken husk? I suppose it's because people like a challenge to their toughness, to their endurance, as long as they know they're never really in danger - these ads are nothing more than the 90s' version of the horror films of the 50s that offered free coffins for anyone who dies of fright during a screening. Combine that with the curiosity to see what could possible be included in these games that's so harrowing and you get ads like these. Do they work? I have no idea. I do want to play Doom 64 now, but as you can probably tell that's pretty much the status quo here at VGJunk.


Recently on VGJUNK:
Steampunky mud simulator The Chaos Engine!
Stab like an Egyptian in Big Karnak!
Stone Age antics in The Flintstones: The Treasure of Sierra Madrock!
Posted by VGJUNK

Email ThisBlogThis!Share to TwitterShare to FacebookShare to Pinterest
Labels: advertising