After last week's article about the Alice Cooper-inspired Go to Hell, I was hoping that today's game would somehow be about Helloween's classic 1985 track "Heavy Metal Is The Law." Sadly, New Bits on the Ram's 1992 Amiga blast-em-up Metal Law is not a gaming paean to the power of shred. It's about shooting dragons and jumping over holes. Well, I've loaded it up now, I suppose I'd better take a look at it. 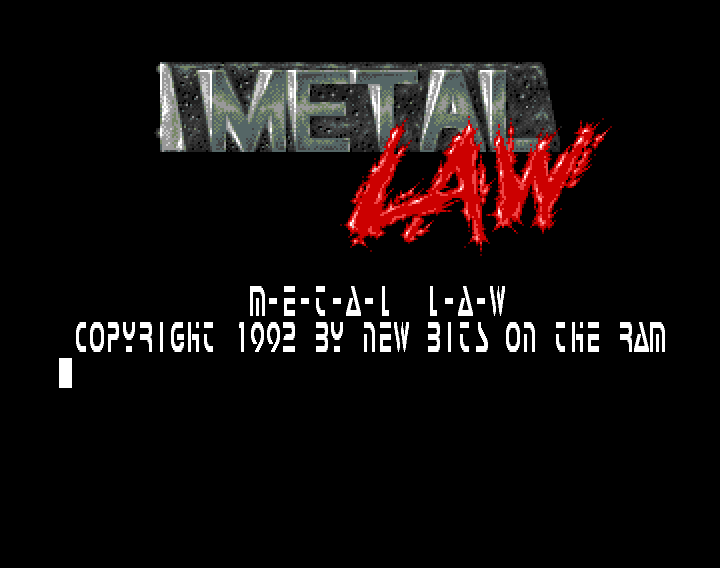 Half the title carved from a solid block of steel, the other half lovingly rendered using squeezy ketchup packets stolen from the pub. Well, blocks of steel aren't cheap.
Okay, so this isn't the most exciting title screen ever featured here at VGJunk but it is accompanied by a rather good track from computer soundtrack legend Chris Hülsbeck.

A promising start musically, but what about the world of Metal Law, the characters and their motivations, their use of futuristic-looking but slightly difficult-to-read typefaces? Here, I pasted a bunch if the intro text together to help set the scene. 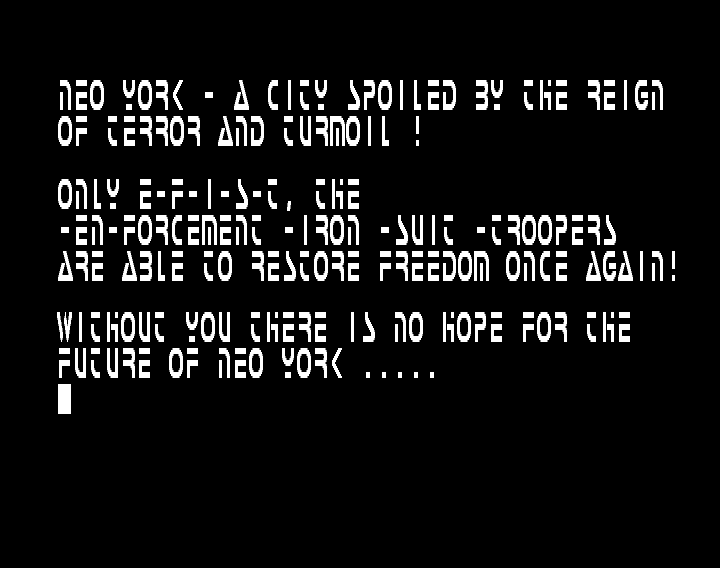 The future city you'll be defending is called Neo York. So Metal Law is set in England, then? If it was a futuristic New York then surely it'd be called Neo New York, but Neo York suggests that I'll be fighting to save the cyberpunk version of York, Yorkshire, England. Honestly, I think that could be a pretty cool setting for a videogame - York Minster with a giant video billboard a la Blade Runner bolted to the side, net-jockeys plying their trade in the neon-lit Shambles. It's certainly more interesting than what's actually going on in this game, which is the standard "cyber-cop cleans up the streets" plotline that's been clinging to videogames for years. These particular cyber-cops are the EFIST unit, although calling them cyber-cops might be stretching it. All that acronym tells us is that they've got iron suits, a level of technology that was around in the Middle Ages. Oh man, I hope I get to play as a knight in full plate armour with a laser-gun and a police badge, that'd be great. 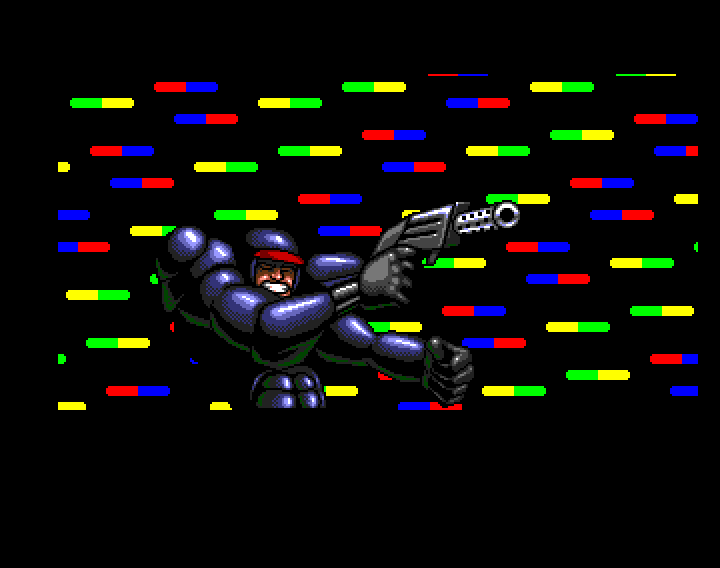 Oh. That's a bit disappointing, and very reminiscent of Sega's scroll-and-shoot cyber-cop adventure ESWAT. I can't say that I'm surprised by the similarity, what with the star of Metal Law being called EFIST and all. 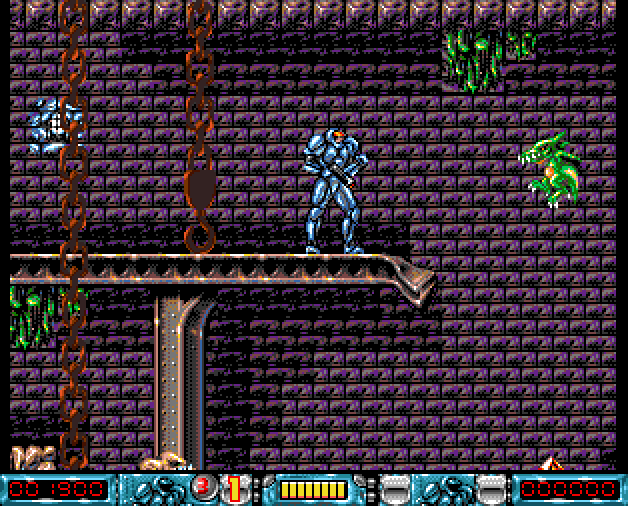 The sewers beneath Neo York are filled with strange creatures, hooked chains and doors with radiation symbols on them that go some way to explaining all the strange creatures and hooked chains. The chains are for moving the radioactive waste around, you see.
Metal Law takes a simple formula and doesn't do much with it - walking from left to right and shooting monsters is all that really happens in this game, but while the gameplay may be simplistic it is handled well. The controls are tight, the pace is brisk (especially once you've upgraded your gun) and you can even double-jump as long as you remember that you have to start your second leap on the upward part of the first one. 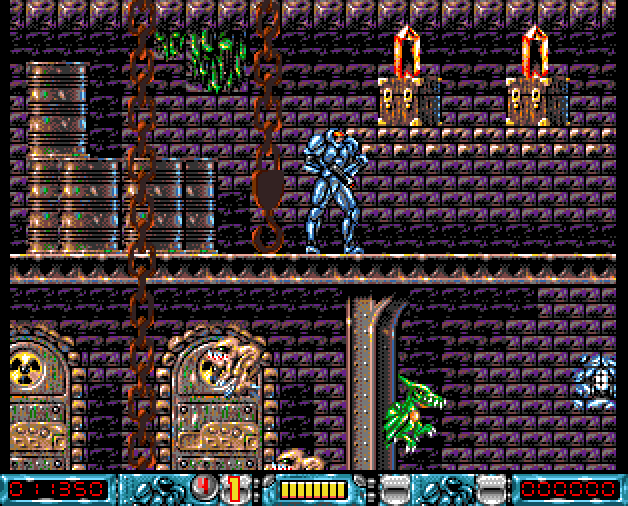 Power-ups come in the form of these glowing crystals. Whoever left them here doesn't seem to have a firm grasp of how treasure chests work. I think it's a size issue: they needed a bunch of treasure chests to store their gems, didn't take the difference between imperial and metric units into account and ended up with a truck full of chests too small for the gems they were intended to hold. The chests remain scattered throughout the stage as a grim reminder of the folly of not thoroughly checking your measurements, and also as a series of small obstacles that EFIST has to jump over. 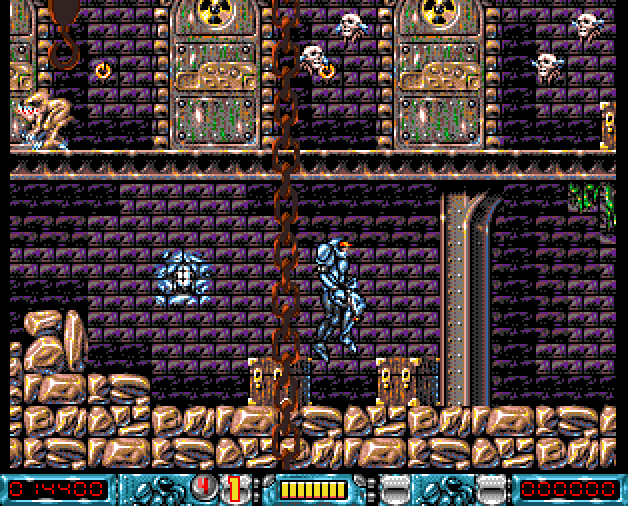 The available power-ups cover the usual run of action-platforming tools: extra health, extra lives and the ability to upgrade your gun up to four times for bigger projectiles that do more damage. You only go down one power level when you die, unlike the Gradius-style "back to square one" approach, and for that I am very grateful because I fell down a lot of holes. Sometimes this was thanks to my own stupidity, leaping from jutting girders into the unknown after forgetting that you can hold down on the joystick to pan the camera downwards and thus locate some secure footing. The rest of the time it was down to pure greed, because Metal Law will often tempt you into a series of difficult jumps by baiting the distant platforms with gems. I eventually learned that my greed was getting the better of me, so Metal Law has some value as a tool of moral instruction if nothing else. 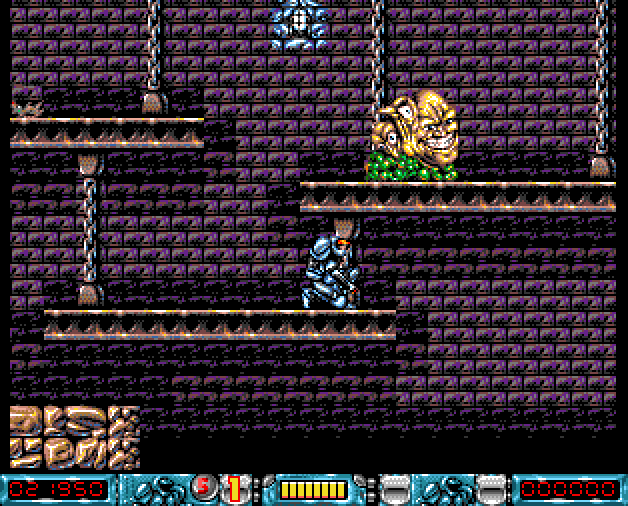 After a while I found a blinking sign that read "EXIT", so I walked towards it only to be placed in another, extremely similar-looking level. The big difference was the appearance of these new enemies. They're revolting, but they're cheerful about it. We could all learn a valuable lesson about appreciating the things we have - like limbs and a method of locomotion that doesn't leave a trail of slime behind - from Grinning Bald Mutant Slug-Head here. 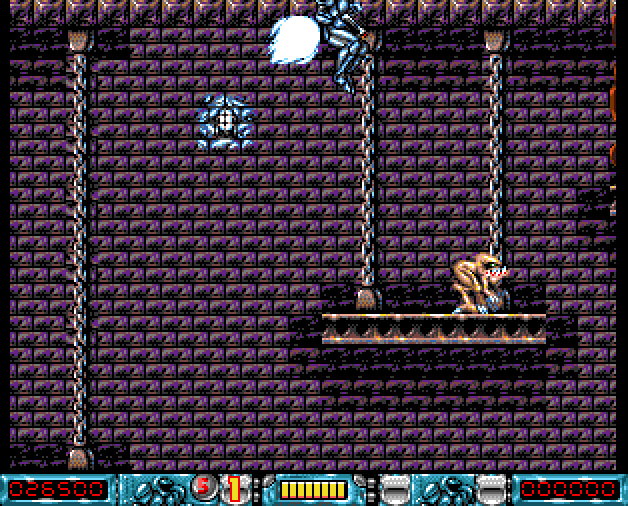 The platforming aspects of Metal Law are more pronounced in this stage, and the key to success in this game is mastering the quirks of the jumping system. You have to press up on the joystick to jump - a control method I hated back in the eighties and one that I hate even more after nearly thirty years of playing games where a button makes you jump - but it's implemented well enough. There are two things you have to remember, however. Firstly, as mentioned you can only double-jump on the upward arc of your first jump. Secondly, you can't fire your weapon while you're moving upwards, but you can on the way down. That doesn't sound like a big issue, but when there are so many airborne enemies floating between the platforms you're trying to cross it's important that you keep it in mind.
Once again, another exit sign was waiting for me at the right-hand side of the stage, but this time it took me somewhere different. 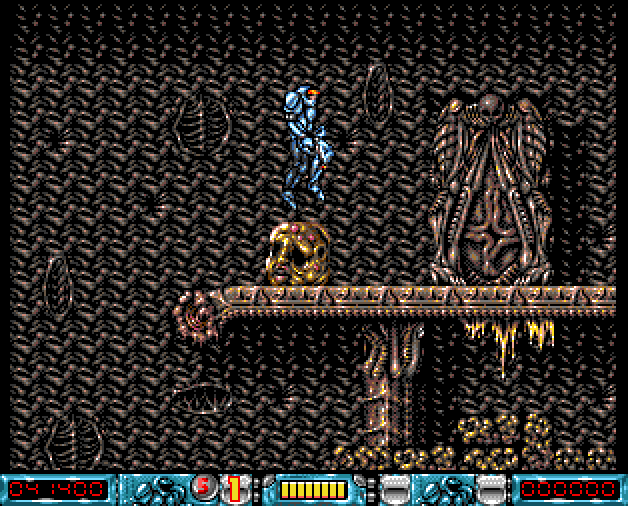 I said "different", not "unfamiliar". Yes, it's a stage heavy with the influence of Swiss artist H. R. Giger, the man who designed the alien from Alien - all ribbed bone and gleaming biomechanical parts, and even if you've never seen any of Giger's art or the Alien movies then you'll probably recognise the look from some other videogame because I think Giger's work is only just behind Lord of the Rings and actual human warfare on the list of "things that have inspired videogames".
So, the backgrounds owe a debt to Giger's work on the Alien franchise, but what about the enemies? 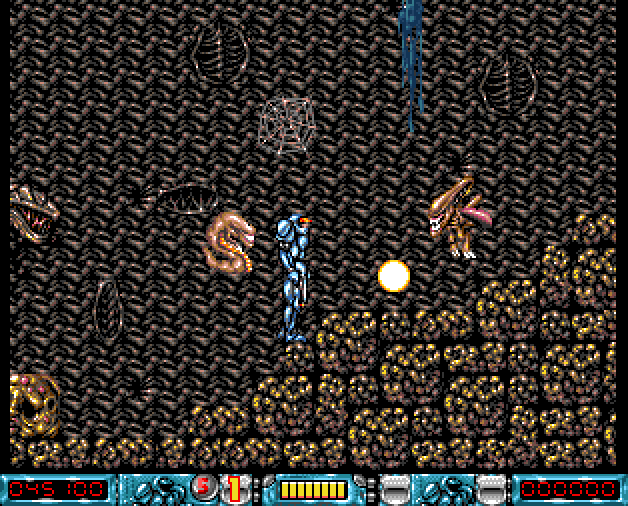 No eyes, big toothy mouths, elongated heads that you could definitely get away with calling "phallic"? Yup, looks like a Giger alien to me. I'm not sure what kind of animal the alien on the right would have hatched out of, though. A really buff dragonfly, perhaps. 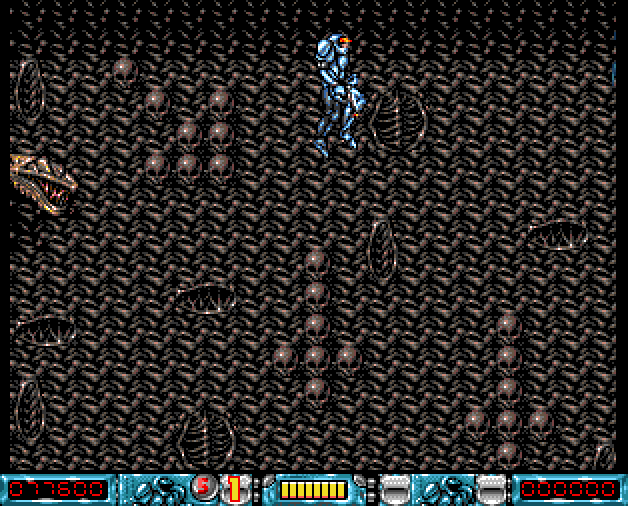 Here's a nice touch: arrows that point you in the right direction during what would otherwise be a series of blind jumps, (relatively) subtly included in the background. Upside-down crosses made from skulls - not just for Alchemy Gothic necklaces any more! 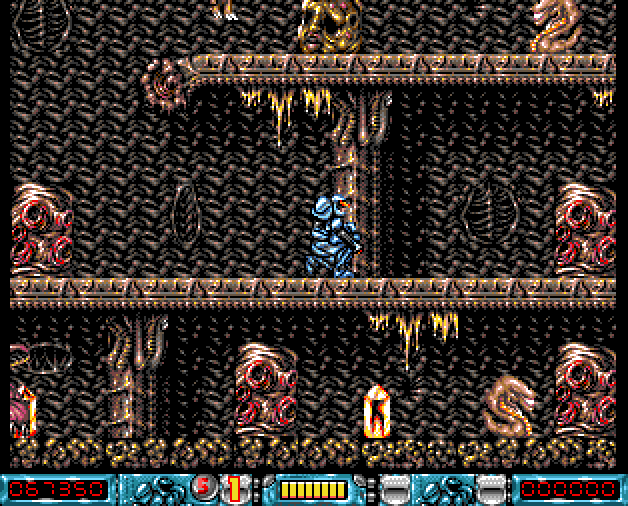 Metal Law isn't packed with innovation... or excitement, if I'm being honest. I'm cutting it some slack for a couple of reasons, though. For one thing I'm enjoying the presentation, the excellent graphics probably being the game's strongest point, with an above-average soundtrack to boot. The other reason is the weirdness of the scenario. The EFIST is supposed to be some form of police officer, right? That was the impression I got, anyway. A police officer who works in the future city of Neo York, a city which according to the first two stages is either a Victorian warehouse with added nuclear waste or an alien hive built from secreted resin and decorated with sphincter-speckled flesh pillars. Is the whole future world like this, or have I been sent into the bowels of the undercity where the danger is more pronounced? If it's the latter, I'd be worried that EFIST's superior officer is trying to get him killed because it's all leaping over bottomless pits down here and I'm wearing an iron suit. Those are two concepts that do not mesh well. 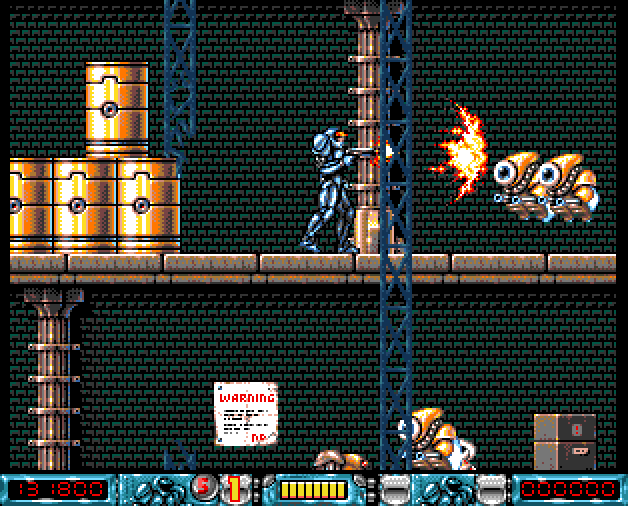 And then, after two stages of grotesque Giger-themed abominations, Metal Law lurches toward a more predictable future of brickwork and robots and thus loses at lot of its charm. The robots themselves are fine, especially these adorably blinky eyebots, but the whole thing is starting to look a bit too much like what I thought Neo York would look like and it's not nearly as interesting as what came before. 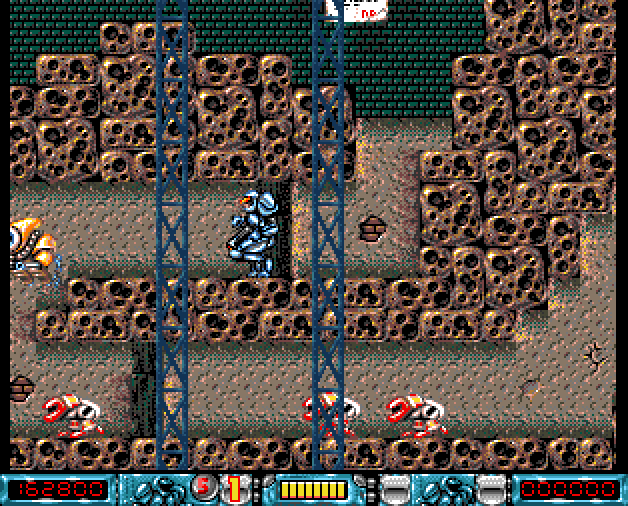 There's a very slight increase in the complexity of the stages here, and when I say "slight" I mean "sometimes you travel from right-to-left instead of left-to-right" so don't start expecting Super Mario Galaxy or anything. Instead you should expect Ninja Gaiden - the NES version, I mean - because Metal Law has slipped into what I call Ninja Gaiden Enemy Placement Syndrome. There are narrow platforms to leap between, and there are enemies both on and between these platforms, and the sole purpose of said enemies is to knock you off the platforms and to your death, just like how I always seem to die in Ninja Gaiden. By the time you reach the robot stages, the enemies could have been entirely replaced by pinball bumpers and it wouldn't affect the gameplay much. 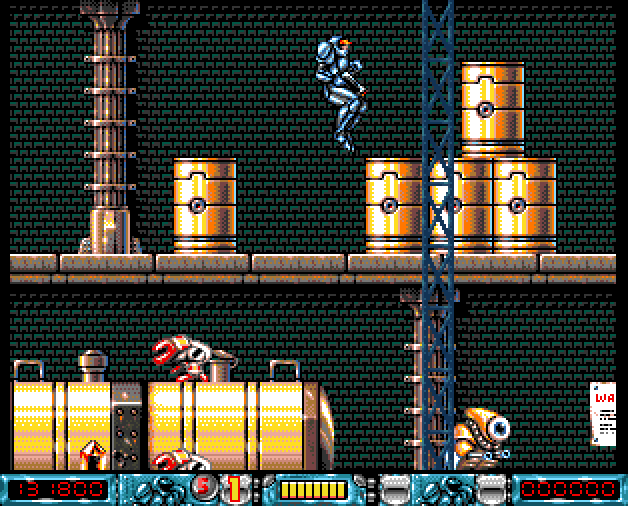 I feel like I should give a special mention to these cylindrical canisters, because I think they're supposed to be oil drums of the future and what self-respecting action game set in a grim urban future would be complete without oil drums being scattered all over the place? If you cryogenically froze Mike Haggar and thawed him out in the space-year 2099, these cylinders are what he'd be punching apart to find a freshly-cooked roast turkey. 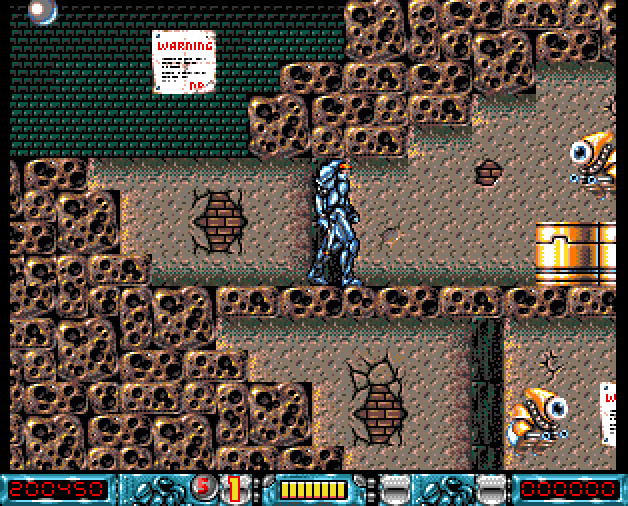 After two stages of battling my way through this futuristic storage depot and the nearby caves that seem to be carved from Aero bars, I came across a hole that said "EXIT" over it. Naturally, I jumped straight in without stopping to consider that an enterprising evil robot could have had the bright idea to place misleading signs over fatal chasms. Well, it turns out that fortune really does favour the brave because by leaping into that pit I, erm, completed the game? 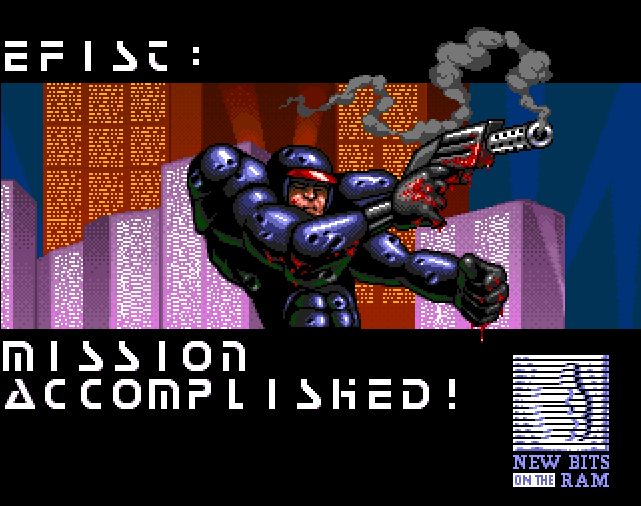 That's it. Six short stages of basic jump-n-shoot action spread over three graphical themes with no exploration, no new powers to master and no bosses to fight. What little there is of Metal Law exists well into "decent" territory, with some of it even being rather good - the presentation stands out and there's a well-balanced difficulty level to it, especially as you get to keep some weapon power when you die - but in the end it's just too sparse to leave much of an impact. More than anything Metal Law feels like a demo of a Turrican game, and speaking of Turrican here's developer Factor 5's logo from the opening of Turrican 3:

Compare that font and the blood-effect writing to the typographical elements in Metal Law's intro. Of course, Turrican 3 was released the year after Metal Law. Are Factor 5 and New Bits on the RAM connected in some manner? Was it a nod from the Turrican developers towards the undoubted influence of their game on Metal Law? Who knows. Not me, I don't know anything. In fact, I'm going to leave you with a question. If I was playing as the Metal Law of the title and I was dispensing justice, what crimes were the creatures (and robots) in this game guilty of? Because if slowly walking back and forth in a small area is a crime now then I'm looking at ten to twenty next time I'm waiting for a bus.