Today I'm going to be looking at Triple Six's 1985 ZX Spectrum game Go to Hell, and it's not because the title's confrontational attitude has left me feeling as though I have a point to prove. Just how dense do you think I am, that I could be manipulated into playing a computer game just because the title insulted me? Gimme a break, I've got much better reasons than that.

Reasons such as this loading screen, where guillotines and gallows share space with an oddly familiar green face that leers out of the screen at the player, oblivious to the blood-drenched axe floating next to his ear. The best part of this screen is that "666" floating above Triple Six's logo, just in case you couldn't visualise what a triple six would look like.
The real reason I'm writing about Go to Hell is that one J. Jones is credited as the author of this game. That would be John George Jones, and he and I go way back.

Long ago, in the distant year of 2012, I wrote an article about the Spectrum gorefest Soft & Cuddly, a game that I played as a child and which scared the crap out of me. My fascination with Soft & Cuddly stayed with me for many years until I exorcised my fears by playing it again, only to unmask it as a rather poor and frustratingly difficult platformer enlivened only by the beret-wearing skulls, conjoined mutant babies and zombified sheep that made up the scenery. 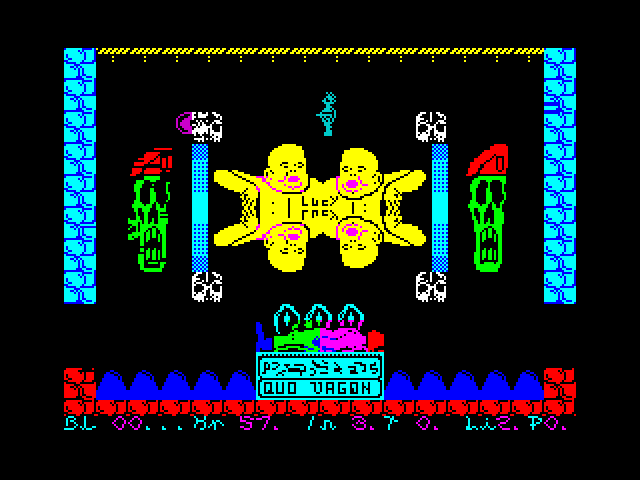 Pictured above is a very representational screenshot of what Soft & Cuddly looks like: ghoulish, macabre, a little painful on the eyes. Why am I talking about this game instead of Go to Hell? Because it was written by John George Jones, making Go to Hell something of a prequel to Soft & Cuddly, and if that loading screen is anything to go by they're sharing a lot of common themes. Themes like gore, disembodied heads and, if my guess is accurate, gameplay that's not much fun to experience. If John George Jones suffered a traumatic accident that messed him up so much that he created Soft & Cuddly, it must have happened pre-1985 because he was already creepy as heck by then. Let's get into it, shall we?

The green face makes another appearance on the title screen, now with an animation that make it  look like he's having a really hard time blinking. I also realised why it seems so familiar - that's because it was traced from the cover of Alice Cooper's album Alice Cooper Goes to Hell. 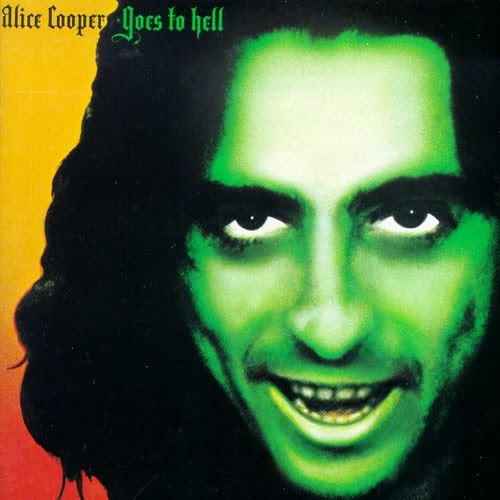 I mean, that's fine by me, I love Alice Cooper and his appearance in this game means I already prefer it to Soft & Cuddly. Alice Cooper Goes to Hell does feature a song called "Go to Hell," but it doesn't seem to have served as an inspiration for the game Go to Hell: the song's just five minutes of people telling Alice / his multi-album-spanning alter-ego character "Steven" how terrible he is, whereas the game is about... well, I'm not sure.

After looking it up in some of the magazines of the time, it seems that the plot of Go to Hell is as follows: after a heated argument, probably about Thatcher's foreign policy or whether "Thriller" or "Billie Jean" was the better Michael Jackson single, (this game did come out in 1985, after all,) the protagonist of the game tells his friend to go to hell. Said friend promptly goes to hell, leaving our hero to curse his friend's literal-mindedness as he travels into the depths of the underworld to rescue his friend and teach him what a figure of speech is.

So here we are, in hell. Hell is a huge maze, and if Hellraiser 2 wasn't released three years after Go to Hell I'd have some suspicions about where Jones got that idea from. This is a maze game, then, but not in the same way that something like Pac-Man is a maze game: for starters, in Pac-Man you can see where you're going. Not so much here, and this really is a maze, a confusing web of narrow passageways and dead ends that require almost complete memorization to conquer.

It's a good job, then, that there are plenty of blood-curdling landmarks to help you get your bearings. For example, you can use this charming image of a head being crushed in a spiked vice to help guide your way through hell's labyrinth. Hang on, blue skin, green hair... is that Captain Planet's head? Was he was condemned to hell for the sin of environmentalism? Maybe he got above himself, what with claiming to be a representation of the very Earth itself and all. I can't imagine God being too pleased with that.

As you can see, the style of Go to Hell is very similar to that of Soft & Cuddly, all tortured flesh, unsettling imagery and enemies that are surprisingly dull, given the rest of the graphics. The first one I saw was a hovering pitchfork without a pole. Dangerous, yes, but not likely to cloud my every waking moment with terror. There's one in particular that thought was a floppy disk for a while, before I thought "surely the enemies can't be that boring" and took a closer look. Turns out it was a flying guillotine that launches projectiles at you.
Hell is packed with malevolent spirits out to do you harm, naturally. They all follow the same basic pattern of drifting around aimlessly, sapping your health if they touch you and revelling in their infuriating ability to travel through walls. To combat the evil forces of hell, you can throw crosses at them because I guess they're all vampires as well as demons. In a rare show of clemency, killing a demon with your cross gives you a bit of health back, so destroying monsters is vital to your survival.

In order to save your friend and escape from hell, you have to traverse the maze and collect six crosses that are lying around the place. Why are there crosses in hell? I couldn't tell you. Maybe Satan likes the irony. All I know is that you have to walk over all six of them and then take them to certain part of the maze to complete the game.
Sounds simple, right? Learn the layout of the maze, chuck crucifixes at any demons that harass you, laugh at the futility of using a crosscut saw to get through bone, rescue your pal and be back home in time for Come Dine With Me. That's how it would pan out, if it wasn't for one small complication: touching the walls hurts you. Not a little bit, either, and so much as brushing against the brickwork will drain your health faster than a Michael Bay movie marathon drains my will to live.

As you can see, a lot of hell's corridors are extremely narrow, giving you little space to fight off the enemies that continually spawn around you. Thankfully the controls are responsive, and that's the only thing stopping Go to Hell from being completely unplayable - otherwise the many times one screen flips over to the next and you find yourself right up against a deadly wall would quickly put you off.
At least the crosses are easy to spot. They're all ten feet tall, and this one's Barbie pink, so there's little chance that I'll accidentally walk past it.

Go to Hell doesn't have much to offer besides low-effort scenes of cartoonish brutality taken straight from my pre-teen doodles - maze games were already tired in 1985, and Go to Hell's twist of a maze where the walls sap you health doesn't make the genre any more enjoyable. I have the memory of severely concussed goldfish, so learning the layout of hell was an exercise in frustration and the constant sound effects - noises best described as a robot voicebox recreating the sound of a tiny horse running through popcorn - demand that you play the game on mute or with a carrot rammed into each ear.

With the aid of a map, some earplugs and a strong drink I collected all the crosses and took them to Alice Cooper's giant head. In the world of Go to Hell, it seems that Alice is Beelzebub. Or a 1976 Alice Cooper LP is Beelzebub. I can live with that. A strange sound plays and that's it, I've finished Go to Hell.

Yeah, I wouldn't be so sure about that. I'm not the one who can't make a games without it being filled with human heads being crushed.
It's tempting, oh so tempting, to finish this article by telling Go to Hell to go to hell, and it's not a good game by any stretch of the imagination. It's a terrible game, annoying and pointless and completely lacking in fun unless you're really into pixel tracings of seventies rock stars. Okay, that last bit I can get behind, and while Go to Hell isn't even as competent as (the also kinda terrible) Soft & Cuddly, there are a couple of things I like about it. There's a certain grim charm to the maze's weird vignettes, although admittedly that's a charm that only exists because I know I'll never be in the same room as the person who created them. It's got Alice Cooper in it, unofficial though his appearance may be. There's also this little message you get when you start the game...

...which is followed up by this one if you get a game over.

It made me laugh, which was a ray of sunshine I'll gladly cling to when it comes from a game like this. 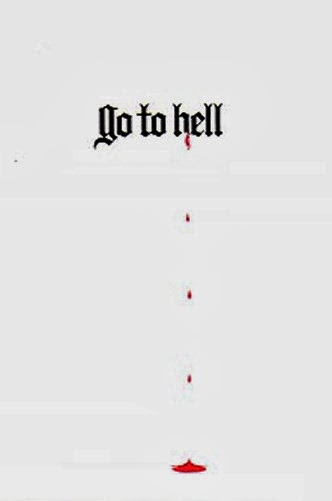 There's also the box art, which is surprisingly subtle and has much more impact than any of the "horrors" contained within the game itself. Sure, the typography has been taken and only slightly altered from the Alice Cooper Goes to Hell album cover, but I still think it's a really effective piece of cover art that deserves to grace a much better game.

Of course, the most disappointing thing about Go to Hell is that it doesn't come with a completely unrelated rock song on the other side of the tape like Soft & Cuddly did. When that game was over, at least I could have a dance and get my jollies that way. As my time with Go to Hell draws to a close, all I'm left with is a headache and the vague feeling that I've just been added to some government watchlist.