Amongst the vast pantheon of Halloween monsters, the humble skeleton is one of my favourites. They're simple yet effective reminders of our inevitable mortality, but because they're always smiling it's easy to un-spookify them so that they can slot nicely into the cutesier end of the Halloween spectrum. Plus, they're mysterious. You don't know what they want. A vampire is after your blood, Freddy Krueger wants you to fear him, but what is that skeleton after? Does it need your skin, from which it will fashion a comfortable sleeping bag or hammock? Does it yearn to gnaw on your bones and draw sustenance from the sweet, sweet calcium inside? I have no idea. Maybe I'll discern their sinister motives by writing about some videogame skeletons. Because this website is about videogames, not skeletons. For now.

I gotta confess, I'm not a big fan of Killer Instinct, and I haven't played it enough to provide you with an honest and accurate representation of the game. What I can tell you is that in Killer Instinct you can play as a skeleton, which gives it at least one big tick that Street Fighter II doesn't have in its "reasons to play this game" column.

Well, that clears up the skeleton's motivations, at least. They don't really want anything, they're just in it for the murder. I probably should have saved Spinal for the end, used him as the big reveal, huh? Oh well. Actually, I read that text again and it doesn't make sense: if Spinal has no memories, how does he remember that he's a fighter? Okay, sure, he was reanimated with a big sword in his hand, but when I die I'm planning on being buried in a Beetlejuice costume on the off chance that someone digs me up years later and that doesn't mean I was Michael Keaton while I was alive.

Also, why is Spinal wearing a headband? To keep the sweat he doesn't produce out of his non-existent eyes? I know, I know, the answer is probably "fashion". Dying thousands of years ago only to be brought back to life by an evil megacorporation in order to take part in a fighting tournament is no excuse for not looking your best.

My favourite thing about Spinal is his ending, though - he gives up on warfare and becomes an actor, winning an Oscar for his first movie which must have made for an interesting acceptance speech given that he doesn't have vocal cords. And hey, look, a skeleton pun so groanworthy I'm disappointed I wasn't the one who thought of it. Maybe I have judged Killer Instinct too harshly.

If you're after a skeleton of the more adorable variety, then look no further than the Puyo Puyo series' resident bonebag, Skeleton T.

Skeleton T is a skeleton who loves tea, and even if it's green tea rather than the good ol' British cuppa, gawd bless ya m'arm, etc, etc, there's still something wonderfully charming about the living bones of the formerly dead calmly sipping a refreshing beverage. Technically Skeleton T is a villain, but he's so woefully bad at Puyo Puyo - he doesn't even know how to rotate his pieces, and if you've never played a Puyo Puyo game then try imagining how difficult Tetris would be if you couldn't rotate the pieces - that he's barely a threat and you can concentrate on appreciating just how adorable and precious he is. Which is a lot.


The Skeletons of Golden Axe II

Look out, Ax Battler! There's a skeleton right behind you, and it's got a farming tool and a saucepan lid!
This is classic Megadrive brawler Golden Axe II, and it's got skeletons. Lots of skeletons, all of them eager to serve their dark lord by defeating the scantily-clad heroes of the game. I wonder what reward Dark Guld promised them to get them on-side? An un-lifetime's supply of extra-strength skull wax, maybe. Anyway, as far as videogame skeletons go the ones from Golden Axe II have a real classic feel to them, a Ray Harryhausen-y, Jason and the Argonauts vibe that gives them a sense of character despite them just being your basic human skeletons. I think it's the no-nonsense way they go about their hero-slaying business, as though the time they spent being dead has really instilled the value of positive action into them.
Let's not forget that Golden Axe II is a side-scrolling beat-em-up, and as such it's going to contain palette-swapped enemies. But how do you palette-swap a skeleton? Bones only come in one colour, after all. Oh, what a narrow-minded view - with a little imagination, skeletons can take on any colour of the rainbow!

Also grey, which isn't a colour of the rainbow but which provides a surprisingly effective amount of camouflage. These must be Dark Guld's special "night operations" skeletons, then, and I'm willing to accept their colour scheme, because maybe they died in a fire that charred their bones. These skeletons, on the other hand - I'm not sure what happened to these guys.

What's pink, hard and will only rise when certain blasphemous incantations have been uttered? These skeletons! My personal theory regarding the pink skeletons is that the heroes of Golden Axe II made much quicker progress through the game than Dark Guld had anticipated they would, thus reaching his elite skeleton troops before he could finish dyeing them a menacing shade of blood red.

No, shoo, bad Skeleton Krew, you get out of here right now. I've already discussed this before, and you guys are not skeletons. I mean, look at Joint over there, he's got more unidentifiable meat on him than a butcher's dustbin. I'm sorry, but you'll just have to wait for me to write an article about videogame characters who look like they fell off the cover of a metal album. 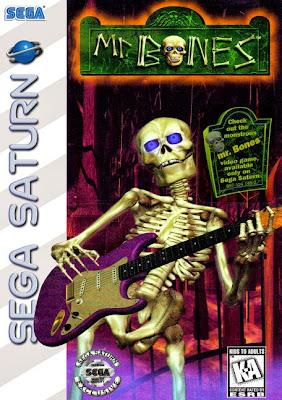 Mr. Bones is a Saturn game about a skeleton who plays the guitar. That's what I gathered from the cover art, at least, and that's all I need to know. You see, I've never actually played Mr. Bones, and I don't intend to, because sometimes it's obvious that the reality can never, ever live up to the promises made by cover art showing a totally radical skeleton dude shredding on his gnarly axe. I'm sure you'd understand if I handed Mr. Bones the crown of "Coolest Videogame Skeleton" without playing so much as one stage of his videogame, purely on the strength of his concept. If that's not enough evidence for you, here's a video of Mr. Bones laying down a sweet solo.

I love that some of the skeleton crowd are holding up lighters. They know a tasty jam when they hear it, and this music is so good they can hear it even though they don't have eardrums.

This one might be cheating a little, because Jaunty isn't wholly a skeleton. It's just his skull which has been scraped clean of flesh, and a skull's, like, what? Ten percent of a skeleton, tops? Still, if I have to bend the rules a little to get him into this article then so be it, because Jaunty is a skull-headed, top-hat-wearing Irish voodoo snake creature and that's not the kind of thing you can just ignore. 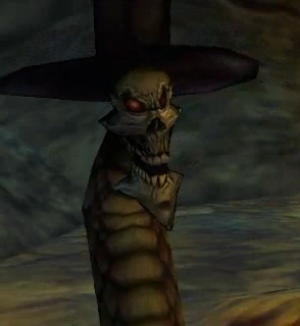 If you've never played Shadow Man, it's a 3D action-adventure-platformer in the Tomb Raider mould with a voodoo twist - you play as Mike LeRoi a young man who can travel between the worlds of the living and the dead by becoming the Shadow Man, thanks to a magical voodoo mask that's wedged in his chest. Jaunty is one of his "friends," serving as the gatekeeper of Deadside as well as providing the comic relief. Jaunty is also very, very Irish.

Faith and begorrah, it's truly amazing that Jaunty doesn't start this cutscene by shouting "top o' the mornin' to ya!" but he brings it round at the end by saying he wants to drink some booze in front of a peat fire. It must have taken Acclaim every ounce of restraint they possessed to not just make Jaunty a straight-up leprechaun. 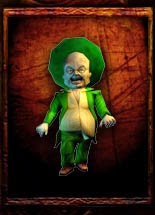 Except that's exactly what they did, and that's how Jaunty looks when he's in the world of the living: like a poorly-moulded plastic keychain from a Dublin tourist shop that's been chewed by a dog. It must be a difficult choice for Jaunty, either living in the real world and looking like something from a remake of the Leprechaun movies or being a totally cool skull-snake but having to live in hell, but he manages to keep a smile on his face even when he isn't forced to by having no lips. I think we can all learn from Jaunty.


Yorick from the Castlevania series

Poor old Yorick has dropped his skull and he can't pick it up, leaving him condemned to an eternity of chasing his brainbox around like a cat going after a laser pointer. While the rest of Dracula's minions are patrolling their sectors and engaging in epic conflicts with the Belmont clan, poor old Yorick can't even get himself ready for battle. I think perhaps it is obvious that I'm projecting some of my own inadequacies onto Yorick.

One of the great things about the Castlevania games, especially the later "Metroidvania" style titles, is that they're not afraid to include a little silliness, and Yorick is one of my favourite examples of that - an uncommon enemy, tucked away where you won't often see him, raising a smile each time that you do see him and he resumes the Sisyphean torment of his existence. Cruel, yes, but he'd be trying to kill me if he could only pick up his bonce, so I don't feel too bad about it.
So, those were some skeletons from videogames. Maybe one day you'll look back on this article as the point at which VGJunk switched from being about videogame to being about skeletons, but no one will believe you after the bonefolk systematically destroy all records of a time before they were in complete control of the planet.