The VGJunk Ephemera series continues, rising from its mouldering tomb to strike fear into the hearts of the living with five more pieces of Halloween-appropriate videogaming detritus! Are they spooky? Well, that depends how scared you are of bad art and the sub-par medical assessment of life-threatening injuries. First, let's look at some adorable pumpkin men.

Aren't they just precious, with their big eyes, their floppy leaf-hair and their huge, jagged grins stretched across mouths easily wide enough to eat a trick-or-treater? They remind me of Sam from the movie Trick 'r Treat, and that in itself is enough to make me very fond of them. I'm forever complaining that there aren't enough pumpkins in videogames to keep me satisfied through the Halloween season, but these little guys are trying their best to redress that balance: not only do they have gourds for heads, but they also attack by spitting out smaller pumpkins!

A pumpkin vomits pumpkins onto an axe-wielding maniac. I think that's the Halloween equivalent of a Royal Flush.

After trying and failing to conquer the world with robots that can throw bombs or shoot fire out of their hands, Dr. Wily was at something of a crisis point by the time Mega Man 7 rolled around. Did Dr. Wily rise to the occasion, using the many lessons he'd learned during his six previous attempts to take over the world to create the deadliest robot he'd ever assembled? No, he stole a mechanical vampire from an amusement park and gave it a gun that shoots noise.

His name is Shade Man, and he's definitely one of my favourite bosses from the Mega Man series. Did I mention that he's a mechanical vampire? Because I feel that provides an important clue as to why I think Shade Man's pretty great. Another reason is his stage's theme, which sounds like this:

It's one of my favourite tracks from the entire Mega Man series, at once spooky and sinister enough to perfectly match the "robotic horror house" theme of Shade Man's stage while still being dynamic enough for an action-packed Mega Man title.
If that was all there was to Shade Man's musical accompaniments, well, it'd probably still be worth a place in this article. There's more, though, because Shade Man's stage has an alternate music theme - if you hold the B button while selecting his stage, this music will play instead.

It's the theme from Capcom's classic arcade game / brutal frustration engine Ghosts 'n Goblins! In Mega Man 7! Small potatoes to most of you, I'm sure, but that's the whole point of these Ephemera articles. The only problem with this is that both themes are so good that I'm bound to waste time dithering over which one I want to be playing while Mega Man shoots a flying robot pumpkin.

Resident Evil 2 now, and a tale of scientists who have no bloody idea what they're doing. Yes, I'm aware that could describe the whole Resident Evil franchise.
Part of Resident Evil 2's plot concerns the creation of the monster-spawning G-Virus by Umbrella scientist William Birkin. Birkin becomes angry at and suspicious of his employers, so Umbrella's truly abysmal human resources department decides to resolve this dispute by sending in a team of armed soldiers to take the G-Virus samples from Birkin by force.

It works out about as well as you'd expect.
Yep, poor old Birkin accidentally knocks a jar onto the floor, and it must have made the Umbrella soldiers jump real bad because it causes the "highly-trained" troops to fill him full of bullets. This turn of events both sets up Birkin as the big spoogly-armed villain of the game by having him inject himself with the G-Virus to stay alive, as well as adding further evidence to the already-substantial "everyone ever employed by Umbrella is wildly incompetent" dossier. Neither of those are what I'm interested in, however. Before Birkin takes the G-Virus, his wife and lab-partner Annette rushes over, full of spousal concern.

She sees her husband bleeding to death from multiple gunshot wounds, and what does she say? "I'm taking care of that bullet wound first." This line makes me laugh every time I hear it, although I couldn't really say why - I think it's probably because it just sounds so... ineffectual. Like, "well, that's fine then, once that bullet wound is patched up I'm sure the the other six or seven holes in my torso will stop leaking blood and pulverised internal organs almost immediately! Thanks, honey, I sure am glad we ended up working side-by-side in this illicit biowarfare lab underneath a sleepy midwestern town's needlessly ornate police station!" Maybe Annette is just trying to put a brave face on the situation, but given Umbrella's insistence on only hiring people who are so useless they regularly put the entire world at risk through their own stupidity, I'd say there's a strong chance she doesn't actually understand the situation and honestly thinks that Birkin will be fine once she's strapped a bit of gauze to him.
William Birkin, of course, does not get better. He turns into a terrifying mutant who tries to impregnate his young daughter with mini-mutants until rookie cop and all-around dreamboat Leon S. Kennedy blows him up. Annette dies when some pipes fall on her head. The lesson is that if you're employed by Umbrella, Inc., you shouldn't bother paying into their pension scheme.


Advertising of the Dead

One thing that has become a regular Halloween occurrence at VGJunk is my proselytizing about Data East's fantastic horror-themed brawler Night Slashers. I mean, I'll tell you to go and play Night Slashers on any day of the year, but it's a game where you can punch zombies so hard they melt into a puddle of bloody goo so October seems like an especially appropriate time to be playing it.
Aside from the normal beat-em-up action, Night Slashers lightens the mood occasionally with a couple of between-stage minigames. 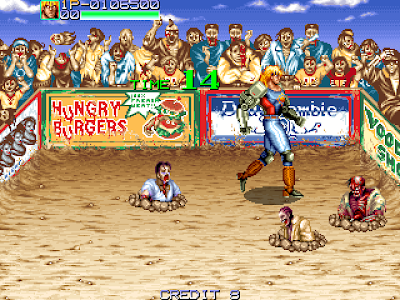 Pictured above is the first minigame, where your character gains points by stomping on the heads of these half-buried zombies. It's Whack-a-Mole for the undead generation! The other minigame is a form of ten-pin bowling where you throw a zombie at some other zombies in the hope that they'll all explode. The minigames themselves are great, but for today I'm more interested in the scenery - the nightmarish forces of the undead are so confident of victory over humankind that they have already begun arranging their own grotesque sporting events, and what do you get at sporting events? Advertising! 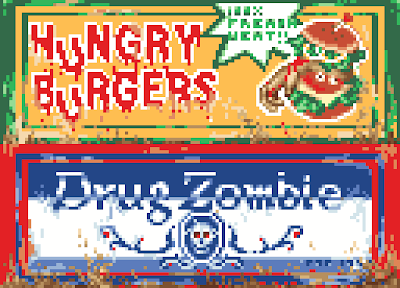 These are the two most visible advertising hoardings from the first minigame, and they sum up a lot of what I love about Night Slashers: it's gory horror fun that never takes itself seriously. The Drug Zombie billboard - which is either promoting an undead pharmacy or a punk band - is relatively sedate aside from that square-eyed skull with the heartwarmingly cheery grin, but just look at that sign for Hungry Burgers. The burgers are hungry, alright: hungry for your soul! "100% FREASH MEAT" (sic) the sign declares, and I don't doubt that for a second. Judging by the hand lolling out from between the burger's buns, I'd imagine there's less than a minute between death, dismemberment and the FingerBurger Special with Extra Eyeballs being handed over to a hungry zombie customer. 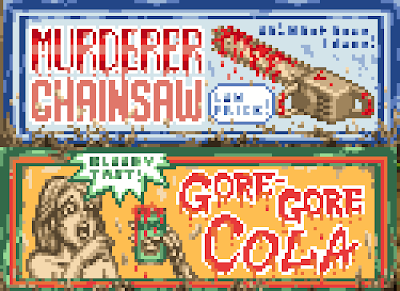 The adverts from the bowling minigame are even better. Low-price Murderer Chainsaws! Gore-Gore Cola with bloody taste! It's as though someone at Data East found nine-year-old me's sketchbooks and created an entire morbid economy to support all the monsters and freaks I'd drawn. I can certainly appreciate a world where chainsaws are advertised not on their ability to deal with lumber but on their potential for gory death. 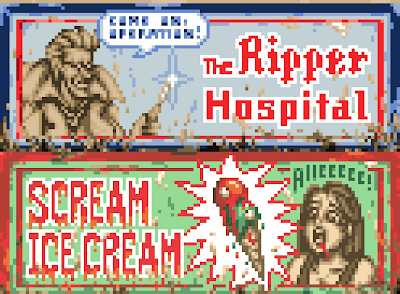 You might hurt yourself chasing people through the woods with your Murderer Chainsaw, but that's okay because you can always head to the Ripper Hospital to get patched up. Except, ahem, you can't, because the doctor pictured on that sign is actually Night Slashers' first boss and by the time you reach the minigame you've already beaten him so badly he now looks like a thick, hearty soup with bone-chunk croutons. Thank you, Mad Scientist, for showing me a glimpse of a world where hospitals are advertised by madmen wielding scalpels and shouting "Come on, Operation!"
Finally there's Scream Ice Cream, and you may think that Data East have rather over-sold the ice cream / scream pun on this one, but take a closer look. That ice cream has eyes in it. It's eyes-cream. Consider that your reminder that Night Slashers is fantastic and you should play it.

Capcom's Darkstalkers series of fighting games could put in a decent claim for being the most Halloween-y videogame franchise of them all - the famous monsters of myth and legend do ultra-violent yet cartoony fighting with each other, sometimes against the backdrop of a living steam train or huge god-foetus with an eyeball in its foot. 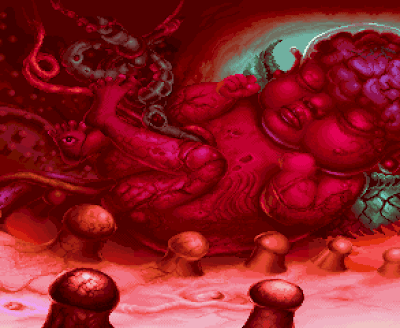 That's because the eyes are the windows to the sole, ba-dum tshh. Anyway, Capcom tried to excite the imaginations of Japanese arcade-goers by advertising Darkstalkers with bold, colourful, over-the-top arcade flyers like this one: 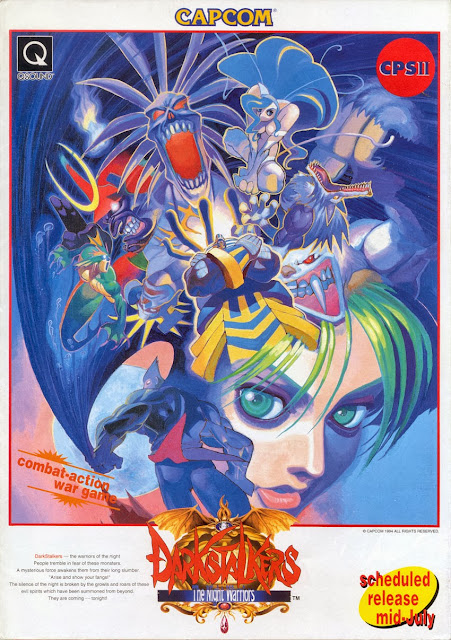 (Flyers via TAFA)
It looks good to me - if I'd seen this as an impressionable youth it would definitely have made me want to play Darkstalkers, if only to find out what the hell is going on with that werewolf's mouth. However, Capcom's American distributors didn't think this was suitable for the macho and manly US market, presumably because it's a little too pastel and there's (ugh) a girl front-and-center of the image. Would you like to see what they came up with as a replacement? 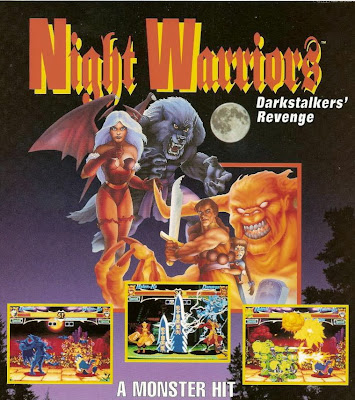 Ah ha. Ah ha ha ha. Where the hell do you start with this? Maybe with the title, where the designer went went with a gothic font except for the capital letters. Or how about Morrigan's costume, which from the bustier down looks strangely like something that a female version of Wolverine might wear? Pyron is still a being made purely from living flame, except his teeth for some reason, and Donovan's sword looks like a shark's taken a bite out of it. Most fascinating of all is what has happened to Anita's face.

Yikes. Take off that wig, Quasimodo, you're not fooling anyone.