It's been a while since I did one of these, huh? It's time for a look at the many sprites that over the years have tried to capture the angry, hairy essence of the most famous X-Man of them all - Wolverine. Is Wolverine the most famous X-Man, actually? He must be, unless you count Cyclops' famous amounts of lame-ness. Not that it matters, I didn't choose Wolverine because of his fame or even because he's named after a species of jacked-up weasel - I chose him because he's been in a hell of a lot of videogames. Games such as these ones! 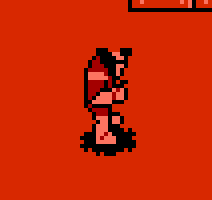 Not off to a great start there, Logan. The Uncanny X-Men is a dismal, almost-unplayable top-down shooter / beat-em-up that can count "turning Wolverine into an unrecognisable hunchback" amongst its many crimes. I'm trying to come up with a witty way to describe what this looks like, but I'm struggling because it doesn't look like anything apart from maybe a Brundlefly-style teleporter accident involving a panda and a slug. Panda-Slug, now there's an X-Man just waiting to be born: the speed of a slug coupled with the sexual inadequacies of the panda species! Hang on, I think that's me. 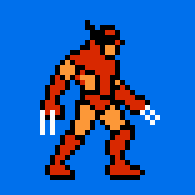 Wolverine gets his own game, and an upgraded sprite to match, in Software Creations' 1991 action platformer. It's not a bad sprite, either! A little short on detail, and the lack of a vibrant yellow in the NES colour palette means that he appears to have bare arms and legs, but otherwise not bad. Certainly far superior to the last one. Go on, look at that first sprite again. At least this one is clearly Wolverine, even if he is down to two claws on each hand. 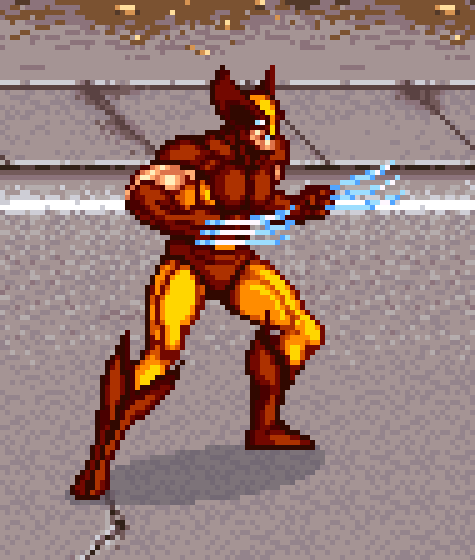 Here come the heroes, to save the world from destruction. They are...kinda lanky, and with a faintly cheerful expression. Look at that glimmer in Wolverine's eye, he's just seen how many enemies there are for him to get his claws into and he knows it's going to be a wonderful day. He might go for ice cream when it's all over, just to treat himself.
Other than that, what else can you say about the sprites from Konami's beloved arcade beat-em-up? They're just well-crafted, characterful and bursting with comic-book energy. Oh, and Wolverine's ear-flaps could double as an emergency hang-glider for those daring clifftop escapes. 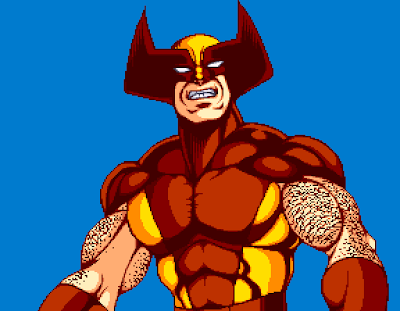 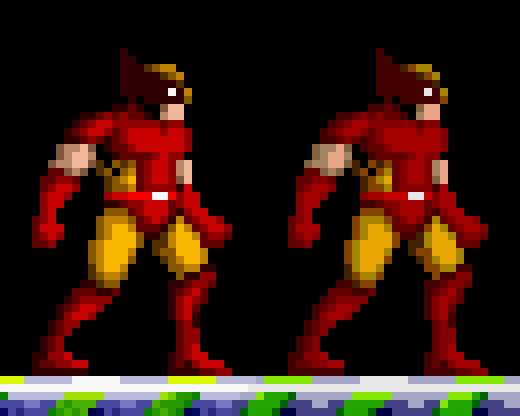 That's the SNES sprite on the left and the Megadrive one on the right, although it doesn't really matter because they're almost identical. Dare I say that the ol' Canucklehead is looking a little doughy here? Too much beer, not enough hand-to-hand combat in the Alaskan wilderness against a man who named himself after a prehistoric cat.
It's the head that threw me, though. He seems more bird-like than anything else, the yellow nose-piece looking like a beak and his noggin in general looking like it belongs to a super-powered mutant rooster. No such problems in the Game Boy version of Arcade's Revenge, mind you... 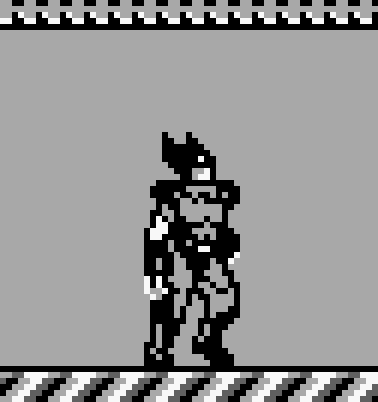 ...because he looks like he's pretending to be Batman. Maybe this is actually a game based on Amalgam Comics, a DC / marvel crossover publication that compressed two characters into one - in Wolverine's case, he was merged with Batman to become Dark Claw. So, that's Batman, but with Wolverine's mutant abilities. And to think I used to complain about Superman being too powerful. 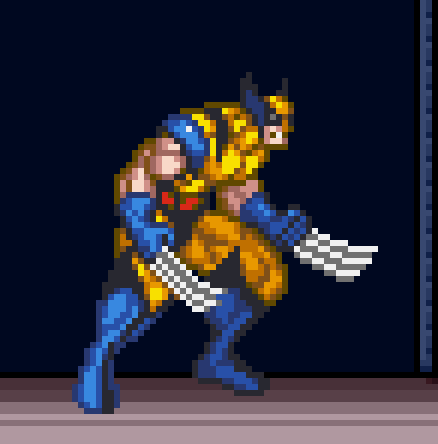 Okay, now we're talking! Capcom's SNES ­X-Men title features a vibrant, chunky Wolverine who looks like he could have stepped straight from the animated series and into your Super Nintendo. Fine, so his claws maybe look more like paper fans than flesh-shredding instruments of death and yes, his bulbous legs maybe give the impression that he's wearing parachute pants, but given what has come before it I think this is a good effort. Or at least I though it was - the more I look at it, the more grossly oversized his legs seem. More of a mutant kangaroo than a wolverine, this one. 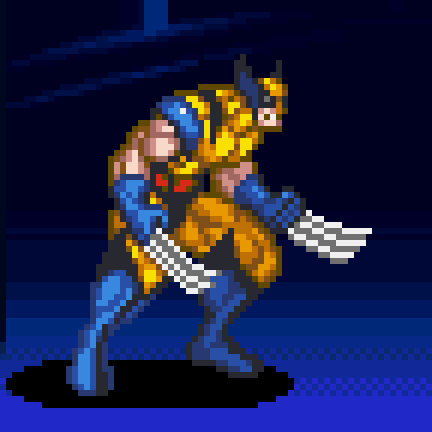 Capcom obviously didn't mind, because they reused the exact same sprite two years later in War of the Gems.

The GamesMaster's legacy: the longest-running stint as the presenter of any TV show ever, countless people initiated into the wonders of astronomy, kickass xylophone playing. Sorry, that's a different GamesMaster.
Not much to say here, because this is a solid Spriteverine, but it does make me wonder about the length of Wolverine's eye-mask-ear-flap things. Are there guidelines somewhere about how long they have to be? Because this in this iteration they're stubby and vestigial. Maybe they get longer the angrier Wolverine gets, and as you can see by his sensitive blue eyes the particular Wolverine is in a lovin' mood tonight.

This sprite's pretty much the same as the last one, but I included so that I could draw your attention to the fact that Master System games were still being released (in Brazil, at least) in 1996. To put that into perspective, the Playstation was first released for sale in 1994.
One last word on this sprite - stand up straight, Logan! You're setting yourself up for a future of chronic back pain! What? Oh yeah, the healing factor. Never mind, then.

Can adamantium rage? Wolverine seems to think so, and I suppose he'd be an expert on the subject. He certainly looks angry, although his (adamantium) rage is tempered with the faintest hint of a smile. Say what you will about Wolverine, but when it comes down to it he really loves his work.
Good proportions on this one, too - compact and muscular without looking like a hairy boulder.

Sadly, those proportions went out the window then it came to Headgames' 1995 effort, set in an alternate universe where Wolverine's mutant abilities caused his torso to grow wildly out of control while his wrists and ankles took on the dainty proportions of a Victorian street urchin. Look at his right foot, I think he's actually using a peg-leg. Buying shoes must be a nightmare for him.
That was a bit harsh. X-Men 2 actually looks really nice in motion, even if that motion seems like it should end in ruptured Achilles tendons. 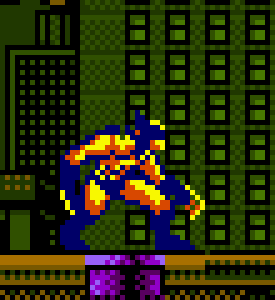 Nope, I'm sorry, but that's Bananaman. Even his claws look like bananas. 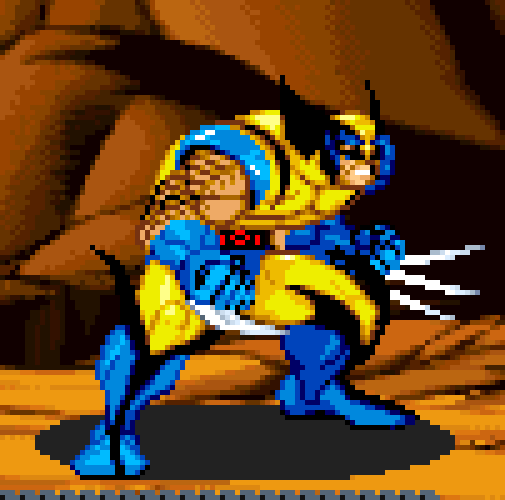 Finally for today there's Capcom's take on Wolverine that first appeared in Children of the Atom and, with the release of Marvel vs. Capcom Origins, was still popping up in 2012. When I think of Wolverine, this is what I think of. Not any of his comic book appearances, not even his incarnation from the X-Men animated series, but his hunched-over, feral, let's-go-bub look used in Capcom's Versus series. That's probably why it's my first mental port of call when Wolverine is mentioned - it's just because Capcom put him in a ton of games without changing his sprite. Lazy? Not really, it helps to speed up development time and plus he looks great.The best on this list by a long margin, even with his strangely flexible claws that wiggle around during his idle stance like grass blowing in the wind. Really sharp grass that'll slice you up. That stuff you get on dunes at the beach, then.

So that's that - Wolverine through the ages, and by "ages" I mean "from 1989 to 2001, not including re-releases." He's had some low points, like The Uncanny X-Men, (although frankly that game wasn't kind to any of the featured characters,) but mostly he's fared pretty well, helped by the fact that Capcom and Konami brought many of his videogame adventures to life. And hey, at least he's not Dazzler.