The era of the Commodore 64 is often fondly remembered as the time of the bedroom programmer, a magical period in the history of digital entertainment when a hit game could be produced by one man in a flat above a chip shop, new titles were sold for one pound ninety-nine and the top programmers of the day lived the lives of international playboys, spending their days painting the Commodore logo onto the taut young flesh of European supermodels like some terrible remake of Goldfinger.

It's better than a lot of tattoos.
This wave of amateur games-developing talent brought a wide variety of titles to the market, but they all had one thing in common: they needed a picture to go on the front. How else would you know whether you were buying a deep-space shoot-em-up or a platform game about a disgruntled miner? Non-existent development budgets meant that certain sacrifices had to be made when it came to cover art - artistic skill and talent, usually. Yet somehow these covers were often charming in their graceless wonkiness, and so I've put together this little look at some of the finest works of art to grace the tape inlays of the Commodore 64's many football games. Why football games? Because they demand artwork that depicts passion, dynamism and men with loose perms and tight shorts (this was the eighties, after all). Also there are loads of them.
Here we go then - C64 football game covers. You might notice that some of these pictures are from other systems, but the same artwork was also used for the C64 version. 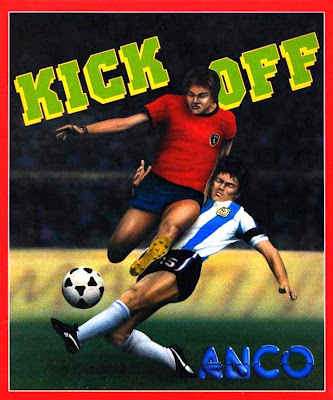 Or Dino Dini's Kick Off, as I knew it. Who the hell is Dino Dini? I always assumed he was an Italian footballer. That seems logical, right? Turns out he was just the guy who designed the game and he happened to have a name that sounded like a Serie A superstar. Forget that, though, and check out this extremely unorthodox tackle. The serene expression, the hand gently caressing his rival's hip: the guy in the striped shirt is more content in this one beautiful moment than he has ever been in his entire life. Red isn't so pleased about the whole thing. You can tell this because he's about to scrape his boot right down stripey's crotch.
This is a decent start, though. At least this cover is full of action... 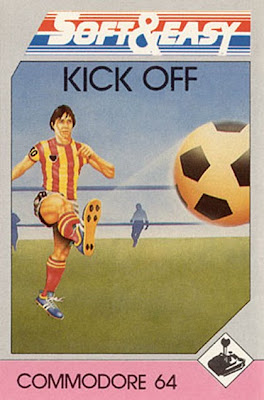 ...unlike this one. You're really not selling me on the joy of physical movement here. Maybe I'm reading this all wrong - judging by the lines in the background, this version is actually the tragic story of a man who has been shrunk to a fraction of his normal size and placed into a game of table football, forced to play a sport he can barely comprehend for the sick pleasure of his captors. Now that sounds like a great idea for a movie! We'll get Shia LaBeouf and digitally clone him so he can be all the other, non-human players. It's the role he was born to play!
Also, the name of the company that released this doesn't help. Every laxative manufacturer in the world will be kicking themselves that they didn't think of it first. 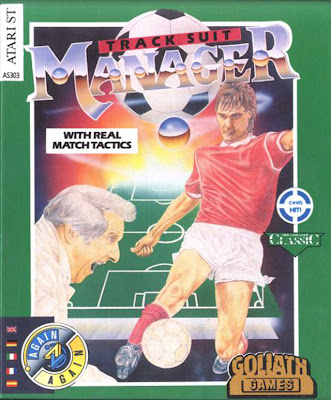 The name implies a kit-man simulator, or possibly a simulator of the guy subordinate to the kit-man: too young and inexperienced to deal with the actual kits, he has to content himself with managing the tracksuits until the current kit-man dies in a mysterious washing-machine-based "accident".
Not really, it's just a management sim. The screaming, chicken-like face of the Roy Hodgson look-a-like gawping in from the left should tell you that much. That old man is taking a good look at his player's muscular thighs, and he likes what he sees. Unfortunately the football pitch they were going to use for their next match is slowly being consumed by a dying sun, so the game is postponed until an alternative venue can be arranged. At least the manager's still happy, his heart burning with the thrill of the game and possibly some undiagnosed angina. Is there any other manager out there who can match pseudo-Roy's passion for the game? 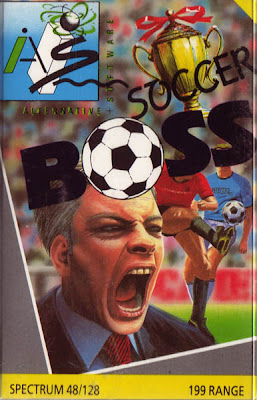 Aagh! That's not an attractive look, is it? His eyes somehow seem to be sunken and bulging at the same time, which is interesting, but the real focus here is a mouth so cavernous that the Soccer Boss regularly wakes up to find teams of potholers exploring the regions around his molars. Actually, I think there might be something wrong with his sight because he's not even looking at the match. I'm no expert on the ins-and-outs of football management, but I'm pretty sure you should at least be facing toward the pitch.
A final note before I move onto the next picture (I can't stand to look at the Soccer Boss' demonic face any longer): I think the artist was told that football trophies often have ribbons on them but had never actually seen it happen in person, because the FA Cup generally doesn't come with a Minnie Mouse bow.
Football Frenzy 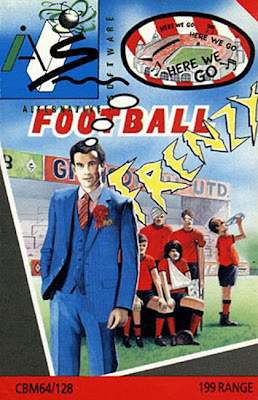 No, I won't mock this upstanding young man even if he is wearing a tie so vile even Stevie Wonder would smack him in the mouth (possibly with his piano). So what if he's wearing a rosette extremely similar to the ones given out at my infant-school sports days? I can't heap any scorn on this man, because if you look behind him he's clearly managing a team of wounded war veterans. What am I, unpatriotic?
One word of advice to Alternative Software: if your game has "Frenzy" in the title, your cover art should probably be a little more dynamic than a man in a suit standing in front of some other, seated, men.
Keith van Eron's Pro Soccer 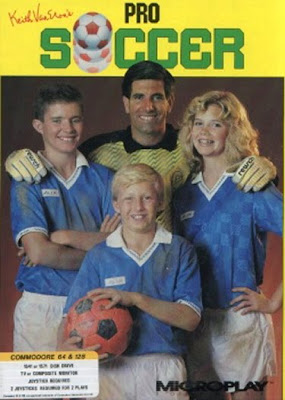 Look, I'm trying to stay away from any jokes about what this sinister, gloved (no fingerprints, see?) man is going to do to those children, so instead I'll point out that despite football being really the only sport than can claim to be loved in all corners of the globe, this is the whitest picture I have ever seen that wasn't of me dancing. 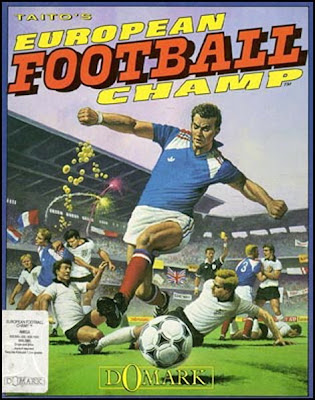 This cover might look reasonable enough at first glance, but when you look a little closer you'll notice that the artist went out of their way to depict exactly how you shouldn't play a game of football. The perspective makes the striker look a giant who's hurdling over two tiny defenders, but I have more of a problem with the fact he's not going anywhere near the ball. And don't shut your eyes! That's the first rule - never take your eye off the ball. Okay, it's the second rule, after "don't play against a race of elfin little people".
It's not just the players who are struggling, either - the referee has let play continue while he books the two players engaged in a bout of handbags, clearly contravening the rules of the game. He's so distracted that he doesn't even noticed the strange yellow fountain of alien spores being released into the atmosphere from the stands. I imagine that's what the stream would look like if you took a leak in zero gravity.

Footballer of the Year 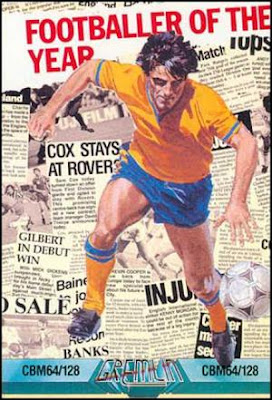 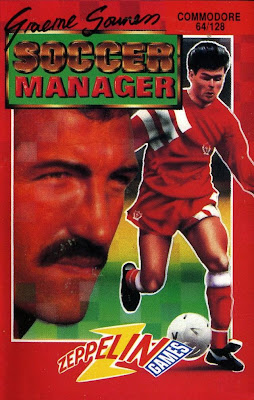 A cardboard cut-out of a Liverpool player glides down the touchline as the floating head of Graeme Souness looks on, silent rueing his decision to go for the "Varnished Oak" setting at his local tanning salon. I don't know why the background is slightly pixellated: maybe it's to show that Souness' mind is as precise and clinical as a supercomputer. Maybe Graeme is a big fan of quilted blankets. All I can say is that it reminds me of checking the football scores on Teletext, another one of those quaint old customs that has been destroyed by the internet like posting a letter or using correct spelling and grammar. 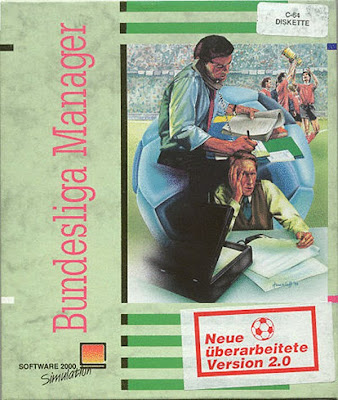 I've saved my very favourite 'til last, and boy does Bundesliga Manager's cover pack a raw emotional punch. Just look at that guy in the middle, who is presumably the Bundesliga Manager of the title. Not for him the excitement, the sheer joy of succeeding at the top level of world football (a scenario demonstrated by the group of players mucking about with a cremation urn in the upper-right corner): in his miserable, briefcase-strewn existence there is room only for disappointment, failure and all-consuming guilt. Those papers in front of him? That's a petition signed by thousands of supporters in favour of having him ejected from Germany using a large catapult of some description, maybe a trebuchet... look, they haven't quite sorted the details out yet, okay? The important thing is that this man knows he will die alone and unloved.
The guy on the phone behind him is actually talking to the Samaritans, hoping for some advice on thwarting BM's imminent suicide attempt. Don't be fooled into thinking this is an act of compassion, though - the man on the phone is the team's assistant manager and he simply doesn't want the job on a more permanent basis. What I'm saying is the top level of German football is a viper's nest of pain and degradation, especially if you look like shamed British comedian Chris Langham. 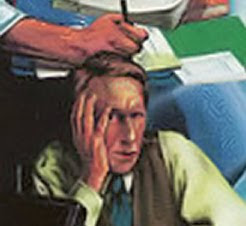 Christ, he looks like something out a Heironymous Bosch painting. Not one of the nice ones either, I mean one of the ones with all the bum-demons.
Football on the Commodore 64, then. Suddenly "The Beautiful Game" has never seemed like more of a misnomer. That said, so many game covers nowadays are simple created by posing in-game assets against a dark background that I do genuinely miss the often baffling yet endearingly cack-handed artworks of yesteryear. 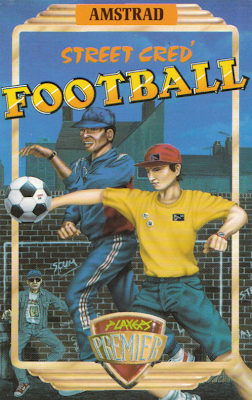 A warning to my fellow humans! Aliens have arrived on Earth and are attempting to assimilate themselves into our societies! You can spot these alien intruders fairly easily, as they have not yet learned to accurately mimic human faces. Also they play football by punching the ball around using a series of motions not unlike those found in our Earth kung-fu, only really fucking stupid-looking.
Obviously this the game's title is laughable, because if you were to wear clothes like that and perform similar hand motions your "credibility" on the "street" would diminish very rapidly indeed. You know what else shows this game up as possibly not being as hip as it would like to be? They used an apostrophe to indicate that "Cred" is the abbreviated version of "credibility". That's kind of amazing.