SUPER SIDEKICKS 3: THE NEXT GLORY

It sometimes surprises people to learn that, although I most assuredly am a colossal nerd, I am also a big football fan (I mean the one where you use your feet, for any Americans that may be reading). Obviously, these days football games boil down to two things: either FIFA or Pro Evo. That didn't used to be the case though, and every manner of football sim ranging from the serious (like Striker) to the non-so-much (good ol' Sensible Soccer) and every shade inbetween. Today I'll be looking at a football game from the slightly more bizarre end of the spectrum: SNK's 1995 arcade Beautiful-Game-em-up Super Sidekicks 3: The Next Glory. 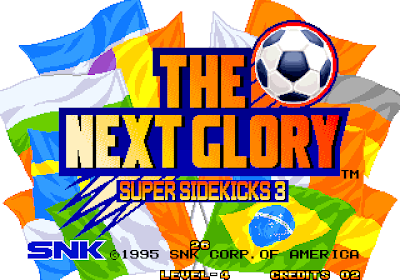 Starting, as seems sensible, at the most obvious place: what's going on with that name? I have no idea what a Sidekick is in relation to association football, although to me it sounds like a cynical sideways swipe at an opposing player. Give him a good Sidekicking in the first few minutes, let him know you're there, that sort of thing. The title must have been chosen specifically for the non-Japanese market, because the Japanese title is Tokuten Ou 3 - Eikoue no Michi, which translates as "Goal-Scoring King 3 - Path to the Glory". Quite why they didn't just call it Goal King or something similar, I don't know. Maybe they had come up with the Super Sidekicks name and they just couldn't bear not to use it, and to hell with anyone who might not know what the dickens they were talking about. Ever the radicals, SNK. 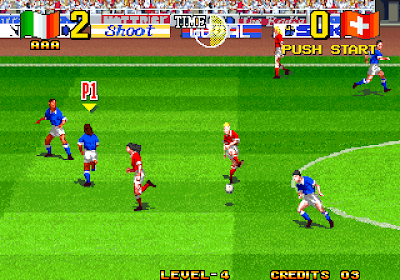 So, a football game. You know the basics: score more goals than the other team. As it's an arcade/Neo-Geo game, the controls are fairly simple. When attacking, you have a one button for shooting or an on-the-floor pass, one button for a long pass and one for an almost useless short pass (and I mean three-inches-ahead-of-you short). In defence, you have a button to switch players, one to slide tackle and one to thump your opponent as hard as possible. Yes, you can foul away to your heart's content, using such vicious techniques as shoulder barges, Nigel De Jong vs Xabi Alonso kicks to the chest and what appears to be E. Honda's flying headbutt. Excellent. While you can be penalised for using them, it seems almost impossible to get sent off in SSK3, to the point where I spent five whole games doing nothing but fouling, trying to get a man sent off. Nothing doing, the game said, apparently assuming that the hundreds of penalties I gave away in the process were punishment enough. 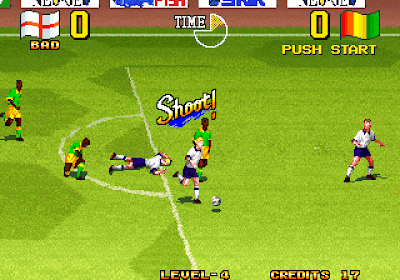 It's certainly a change from the realism of Pro Evo, I can tell you. In fact, you can play the game perfectly well using only the shoot/low pass/slide tackle button: anything more intricate is wasted on SSK3. Long, flowing sequences of pass-and-move football are out of the question, as are crossing and any long ball of any type, really. Short, simple passes and mazy runs are the way to go here. Shooting is a strange thing: normally, the shoot button performs a short-ish pass, but when you get close to goal, a "SHOOT!" marker appears above the player's head, and if you press the button in that situation he, well, shoots. Occasionally a "CHANCE!" marker appears instead, and pressing shoot here brings up a strange first-person view where you have to place a crosshair over the goal and hope a defender doesn't walk in front of it (for their own sake, mostly). The goalkeepers are superhuman in their shot-stopping ability, though, so really the only way to score is to blast it at the keeper and hope the rebound lands kindly enough for you to knock it into the open goal.
The real joy of SSK3 isn't in the gameplay, though. No, being a Japanese Neo-Geo game, it is permeated with a kind of over-the-top madness usually reserved for giant robot animes and fever dreams. This is mostly brought across with the short scenes that appear after any major incident. Obviously, scoring a goal is a major incident, and your players erupt into a technicolour orgy of giant celebrating sprites each time you score. 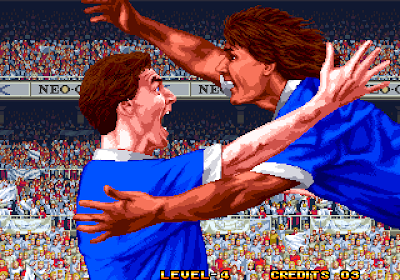 Yes, the guy on the right is flying into the arms of his teammate, presumably to clasp him in a passionate embrace. Although, the guy on the left appears to be dislocating his own jaw, ready to swallow his incoming teammate whole. 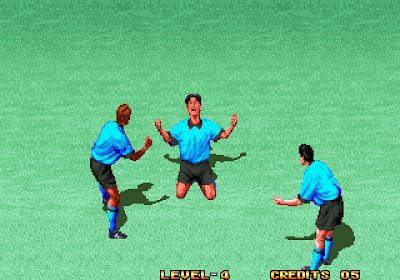 You can take this image one of two ways: either the goalscorer in the middle is joyously celebrating scoring a goal on the international stage, possibly marking the pinnacle of his footballing career, or he's just been informed that a drug baron has killed his family and he's fallen to his knees in a anguished scream, like the start of an '80 action movie. I prefer the latter. 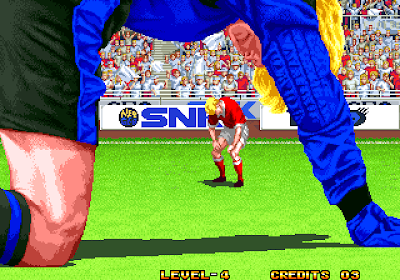 Of course, someone has to suffer when a goal goes in, and here we see the opposition in despair. Due to some none-too-convincing perspective in this picture, it looks more like a giant goalkeeper arcing his body to shelter a tiny man from the sun, like some FIFA-sanctioned version of Gulliver's Travels. 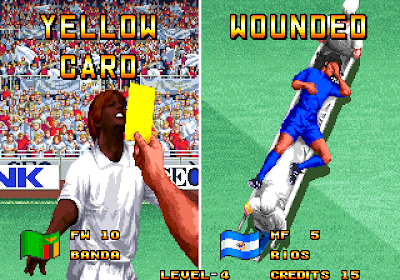 It's not just goals that spark these mini-cutscenes, as we can see from the above shot, taken just after I kicked a guy so hard I wounded him. Not injured, wounded. He's being shipped home from the front lines as we speak with an honourable discharge and a shiny new medal. Although the player on the left is struggling on even after his left arm has fallen off, so maybe the wounded player should just man up. 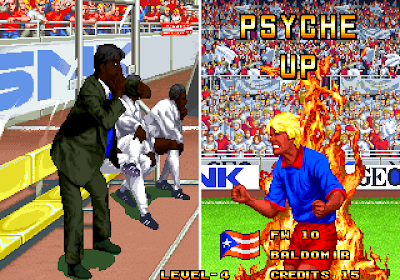 Sometimes when a player is fouled, they will "Psyche Up", which mostly seems to make them burst into flames. He doesn't look all that psyched: he looks more like he's in agony because he's on fire. But that's not enough for some players, oh no. Sometime a regular psyche-up isn't enough... 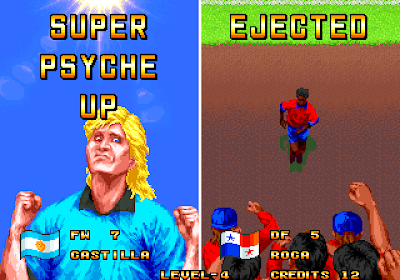 SUPER PSYCHE UP! I can't help but feel that a psyche-up where you clench your fists isn't nearly as SUPER as one where you spontanously catch fire. Look at that face, though. He's definitely riled up about something. 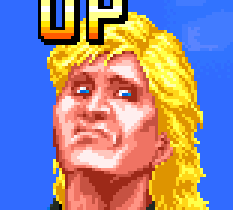 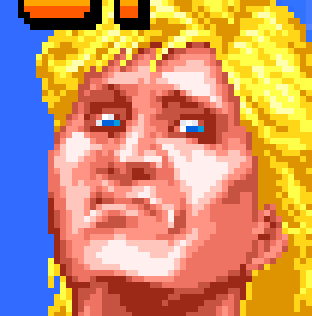 "I WILL EAT YOUR CHILDREN."

That terrifying visage isn't the only only great thing about Super Sidekicks 3. The sounds is fantastic, too. First of all, there's the announcer / commentator, a man so infused with a love, nay, a lust for football that I'm worried his brain is going to chisel its way out of his skull and jump onto the pitch. There's a video coming up in a moment; just listen to the way he hollers the game's title. This man is a hero, and should be saluted. So, I salute you, Mr. Commentator, whoever you are!
The other bit of sound-related fun is that fact that every time you kick the ball, it makes a roaring blast of a noise that would sound more at home in Street Fighter. It certainly doesn't sound like a man kicking a football, I know that much.

Finally, there are the teams and players themselves. There are plenty of countries to play as, from footballing giants like Brazil and Holland to the much more interesting teams like Zaire and Hong Kong. Of course, you don't get any licensed players, but some players are more unlicensed than others, if you get my drift. For example, here's one of England's players: 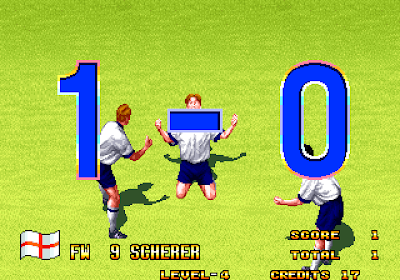 A striker called Scherer who is in no way Geordie goal-scoring legend and dull TV pundit Alan Shearer. My personal favourite of these "homages" is Mexico's goalkeeper, who is quite clearly the infamously bizarre Jorge Campos. 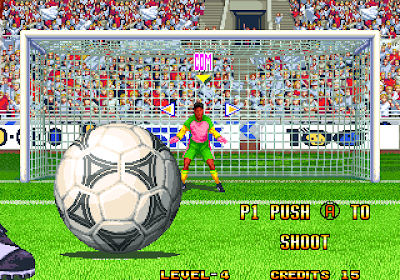 How can I tell? Because Campos was famous for designing his own truly vile goalkeeper kits, which the game does a fairly good job of recreating. I say fairly good, because nothing can match up to the retina-frying horror of an actual Campos-designed kit. Don't believe me? Then take a look at this: 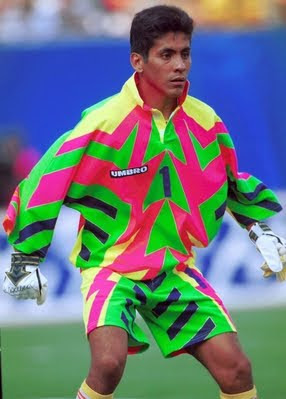 As a famous greasy stereotype once said, there is no emoticon for what I am feeling. Another thing I like is that fact that the many different races in the game are represented by the same sprites that have simpy been recoloured. Going back to the super-psyche-up shot, here's an example: 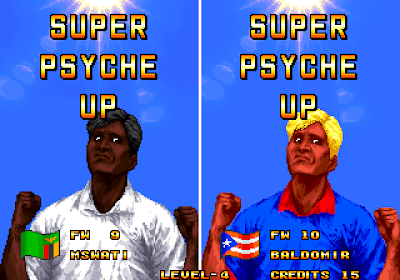 It does lead to some rather strange-looking combinations, like the blonde guy on the right there, but then oddness runs through this game like E. Coli through a fairground burger. 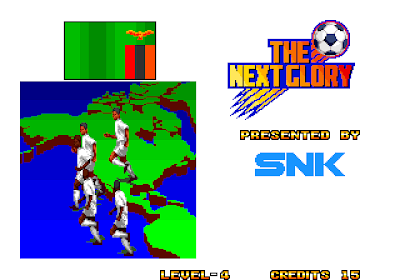 And that's Super Sidekicks 3: The Next Glory. Gameplay-wise, it's a good, fun, solid arcade goal-em-up, especially if played in short bursts. But it's that sense of uniquely Japanese, hot-blooded, hyper-colourful madness that gives it an extra spark and makes it something I really enjoyed playing. Maybe you'll enjoy it too, so give it a go, even if you don't like football. Hell, especially if you don't like football, as it bears little resemblance to actually, you know, playing football. So, try for THE NEXT GLORY!
Posted by VGJUNK