After writing about Granny’s Garden a few weeks ago, I’ve been drawn to the nostalgic charms of the BBC Micro and its raft of wholesome educational content. It was a computer with noble ambitions, and today I am in no way going to honour those ambitions with a quick article about Gloria Callaway and ASK’s 1982 photofit-from-Hell-em-up Facemaker! 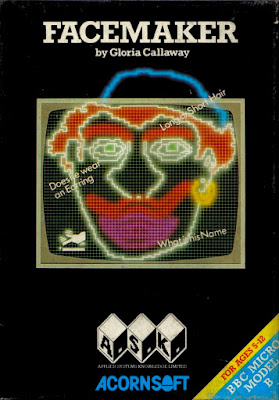 Let’s begin with the cover, because it’s a wonderful example of early-eighties tech-art: the grid, the glowing neon effect, the implication that Facemaker is such a powerful program that it can barely be restrained by your computer monitor. The actual face on the cover is… less appealing. “What is his name?” asks the cover, and I have no idea but if that moustache is anything to go by he’s related to Wario somehow. The face on the cover might look the villain from horror movie about murderous cyber-clowns, but this game is called Facemaker so surely I can make my own faces. Bigger, stronger faces, with eyes that can see in total darkness and mouths that can utter the secret names of the most ancient evils! 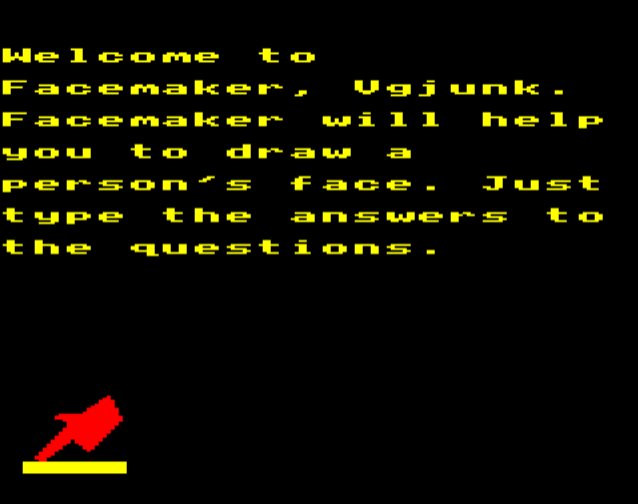 You might have expected Facemaker to be an art program where you use a mouse to draw faces, or perhaps to pick different facial features from a graphic interface. It’s neither of those things but it’s a lot more like the latter, because it’s a text-based system where the game asks you questions and generates a face from your responses. That really is the entirety of the game. It asks you to describe a face, then shows the face on the screen. Facemaker might be the flimsiest “game” I’ve ever covered, but back in 1982 the idea of making a picture appear on a screen by typing in words would have blown my mind and not just because that was two years before I was even born. 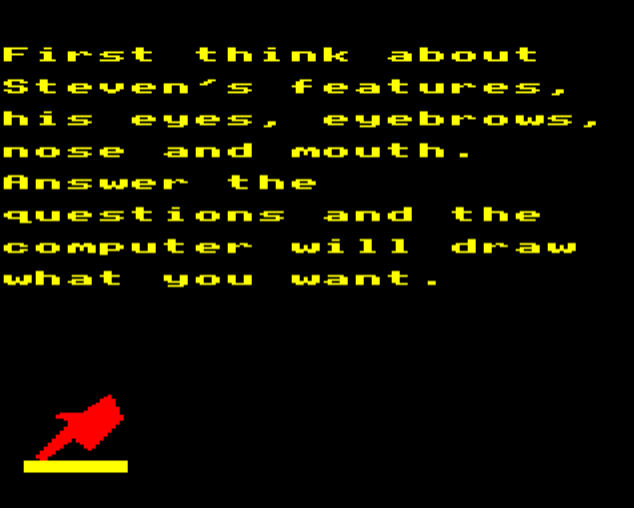 For my first attempt at face-making, I decided to try to recreate a famous person’s face, although I immediately fell into trouble when the first “famous” person I thought of was Steven Seagal. I’m not sure why. I must have seen a picture of him just before loading up Facemaker, or perhaps it’s because when you look at Seagal you think “my, that bloke has a lot of face” and that makes him a good candidate for Facemaker. Sadly, the instructions on-screen are telling me to think about Steven Seagal’s features as one might try to recall the features of a long-lost lover, so this has backfired terribly. 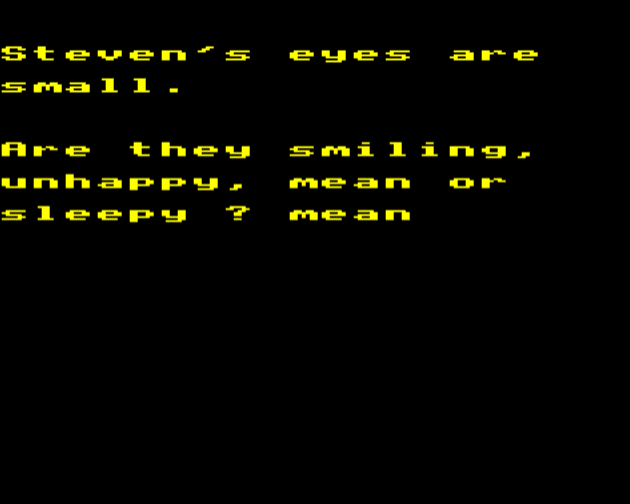 You don’t get to see the facial features while you’re selecting them. Instead, they’re described by either their size or their emotional state, and you type in the choice that best matches your artistic vision. Of course, having not played Facemaker before I don’t have any idea what these choices will look like so I’m mostly working on guesswork but I think describing Steven Seagal’s eyes as “small and mean” is fair enough, right? 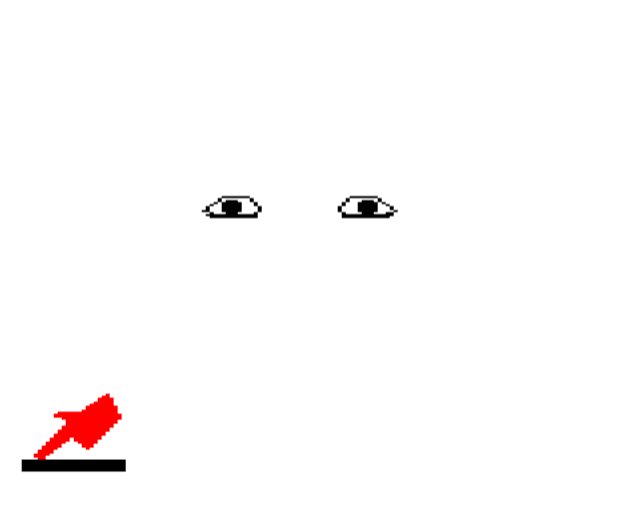 Yes, those are definitely the eyes of the Putin-shilling star of Under Siege 2: Dark Territory. Relatedly, there was a Steven Seagal SNES game in the works that was never released with the hilariously appropriate title Steven Seagal is The Final Option, a name that was surely chosen when every other action movie start refused to participate. 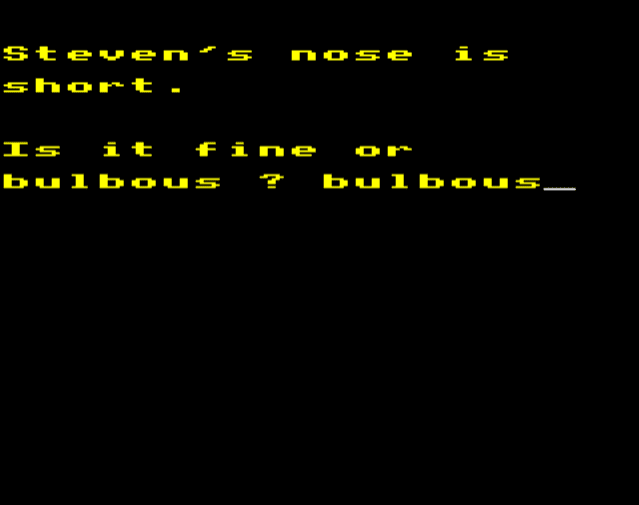 And so it goes, with the player / artistic visionary (delete as appropriate) answering a facial questionnaire on such topics as mouth emotion and hair waviness. Being asked “is it fine or bulbous” is an exciting new brainteaser for me to ponder, but then that’s computer games for you, always providing new experiences. 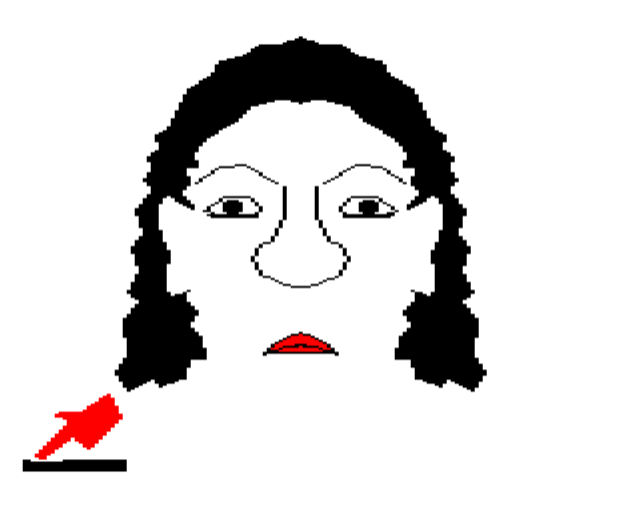 The hair is where this digital Seagal falls apart. There simply aren’t enough hair options, and while the pure black of Facemaker’s colour palette is a fair approximation of Steven Seagal’s unconvincing dye-job there are no options for ponytails or any different hairstyles – it’s really only the length and curliness you can change. That’s why this face looks more like Sid the Sexist from Viz rather than Steven Seagal.
But wait! There are some facial hair options, and how could you possibly recreate Seagal without including his trademark fuzzy-felt goatee? 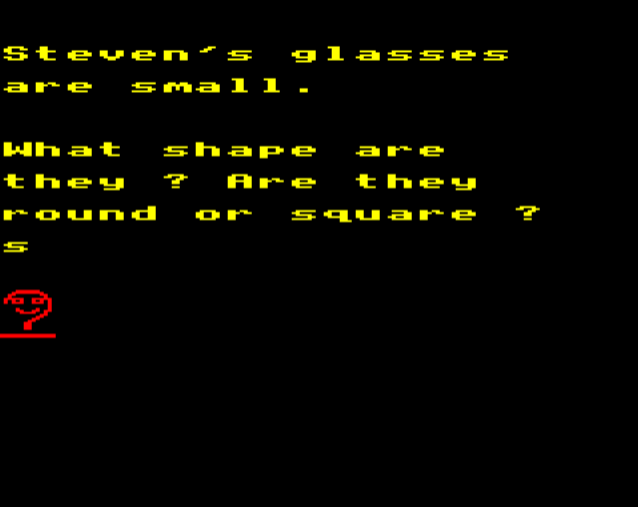 Oh, and don’t forget the glasses, although the main reason I’m including this screenshot is to show you the confused question mark creature that appears if you enter a response the game can’t parse, like typing in “prescription sunglasses that your nan uses when she’s driving” during the questions about Seagal’s glasses. Despite consisting of such a small amount of pixels, it has perfectly captured the look of someone who's laughing during a conversation they didn't fully hear and hoping it was a joke rather than a question. 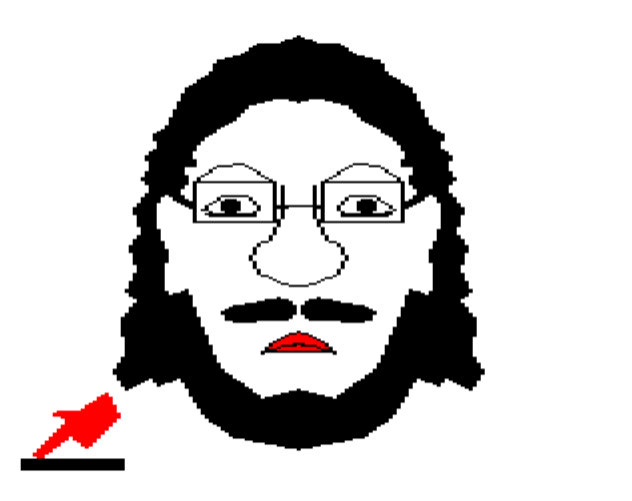 And here’s the finished article. Good god. It is not a great likeness of Steven Seagal, although horrifyingly it does look like me before I started cutting my hair short. It's the bulbous nose that does it. Is this what it means to be hoisted by your own petard? I set out to draw Steven Seagal and ended up with a glimpse into a parallel universe, one where I played this villain in an early-eighties movie about future cops called something like “Star Police 2047” and this was my picture on the computer-generated wanted posters. 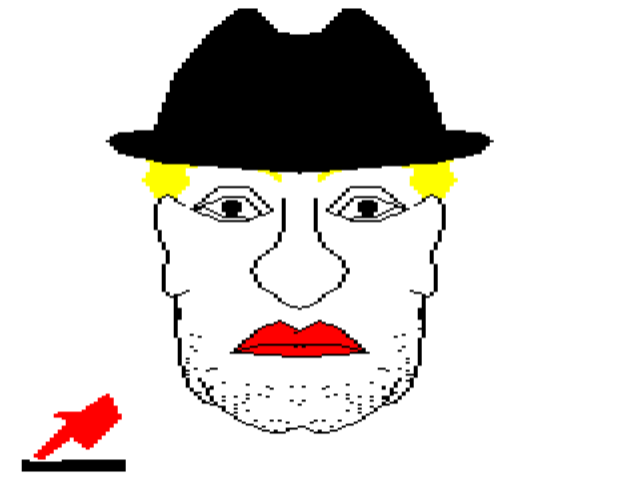 That’s about your lot for Facemaker, then. I fiddled around with it for a while and made a few more faces, like “the bloke who complains on Facebook that girls today don’t appreciate men who read books and collect swords” pictured above, and it’s clear that it’s a very limited program. For starters you can only make white people, and I mean white like a close-up of milk. This is probably for the best, because the BBC Micro’s colour palette doesn’t include any shades of brown and trying to make a “black” face with those limitations would look… not good. Plus you can only have “dark” or “fair” characters – that is, brunette or blonde – and all the bright red lips mean that Facemaker excels as a program for designing bootleg Halloween masks of the Joker and little else. But like I say, Facemaker is thirty-five years old, so I wasn’t expecting anything different.
I’m not going to let the "fun" stop here, though. Oh no, I’ve got a little game for us to play. I created a few more famous celebrity faces, and I want you to see if you can guess who they’re supposed to be before reading the answer below each image. Feel free to let me know how you did in the comments. 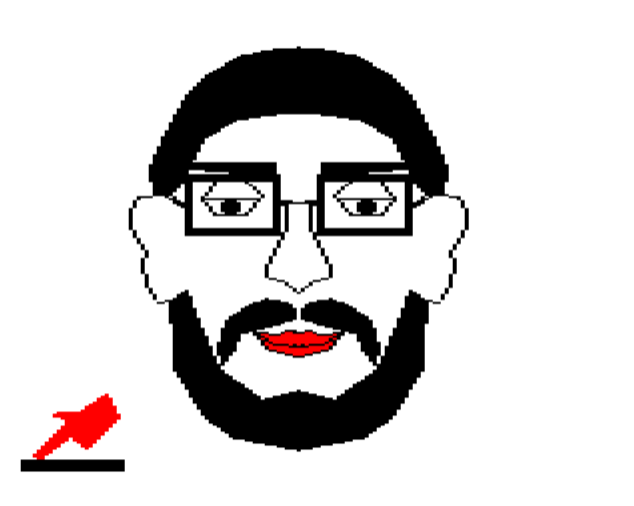 First up we’ve got this super picture that I heroically spent time looking at despite the risk to both my eyesight and my sanity. I must have an iron will, man. That’s right, it came out looking upsettingly like disgraced sex offender Rolf Harris but it’s actually supposed to be Robert Downey Jr.! 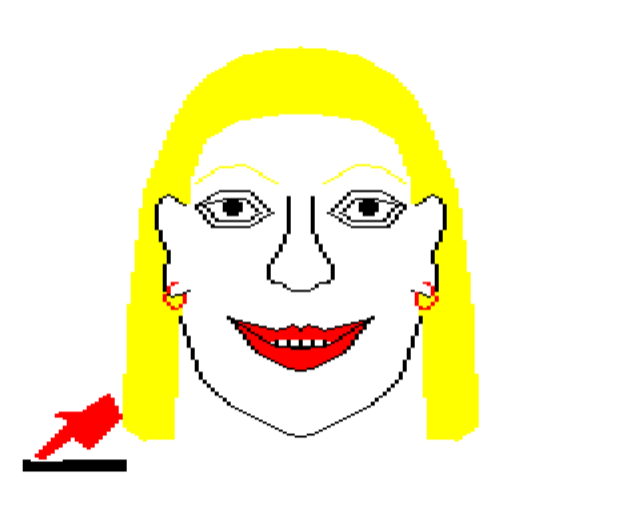 On a similar theme, here’s an actress famed for her beauty so it’s a shame I couldn’t manage to reduce the size of her chin to less than the Bruce Campbell proportions you see above. Fresh from facing Thanos, using Groot like a baseball bat to batter the alien hordes and pulling off the world’s first quintuple motorcycle backflip (I confess I haven’t seen the new Avengers movie yet) it’s Scarlett Johansson! I can only extend my deepest apologies to Miss Johansson. 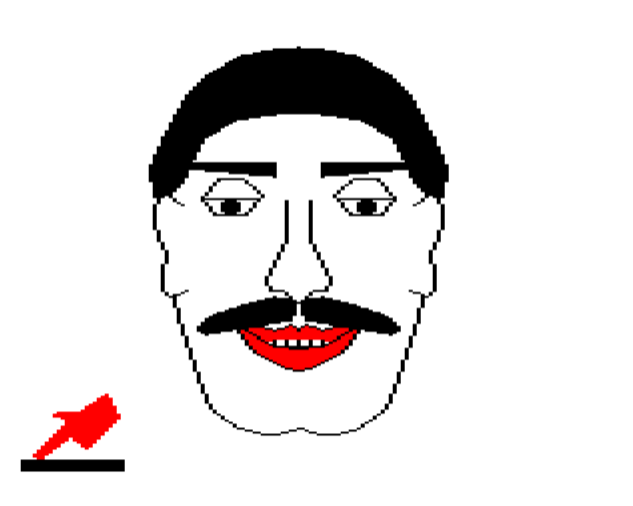 Here comes a good old-fashioned lover boy, drawn with a casual flick of the wrist. I was under pressure to come up with a good likeness, and maybe I’m going slightly mad but I think this is the most recognisable of the bunch. Not exactly made in heaven, sure, but the miracle of eighties computer technology means that you don’t have to be stone cold crazy to figure out that this is Queen frontman Freddie Mercury. 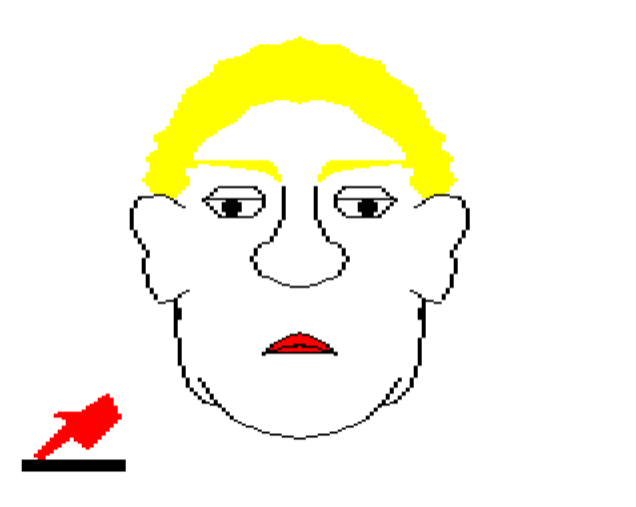 I’m sorry to do this to you all but yes, this is US President and surely the unwitting star of an alien civilisation’s hidden-camera prank show, Donald “World’s Most Powerful Bigoted Grandad” Trump. Perhaps unsurprisingly, Trump is the only person whose Facemaker face ended up being more attractive than the real thing. 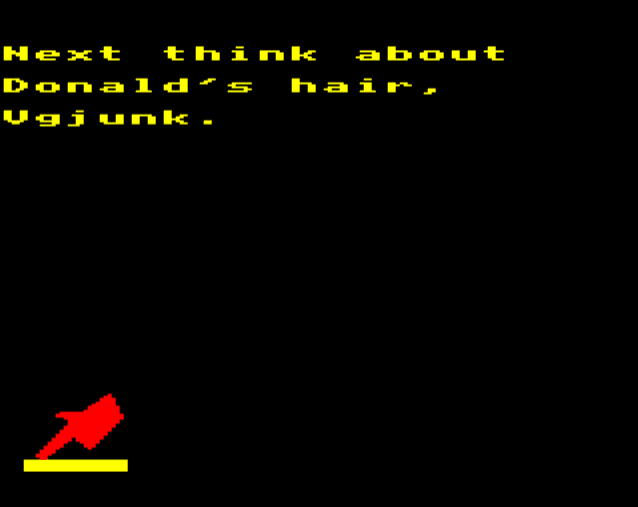 Do I have to think about Donald’s hair, Facemaker? Can I just, you know, not do that? Brighter minds than mine have tried and failed to figure out what’s going on there. 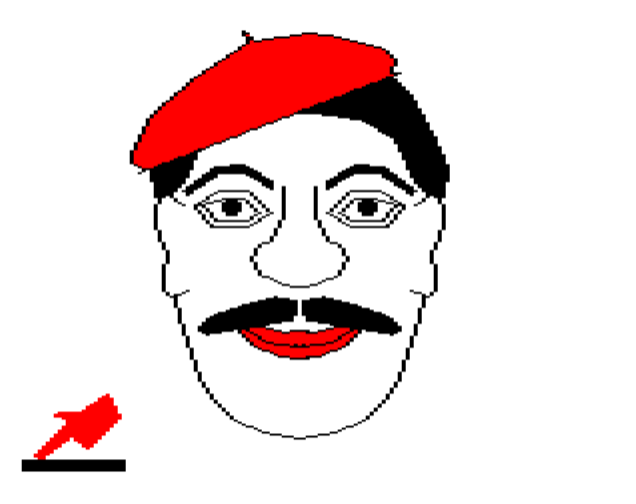 Finally, here’s a nice palette cleanser with one of the world’s most familiar faces, despite him not being a real person. He’s not French, either, despite what this picture might suggest. You’ve almost certainly spent some time hauling his chubby frame across a variety of fantastical worlds, destroying fungi and chucking dinosaurs down holes. Bingo, you’ve got it – it’s-a him, Super Mario! 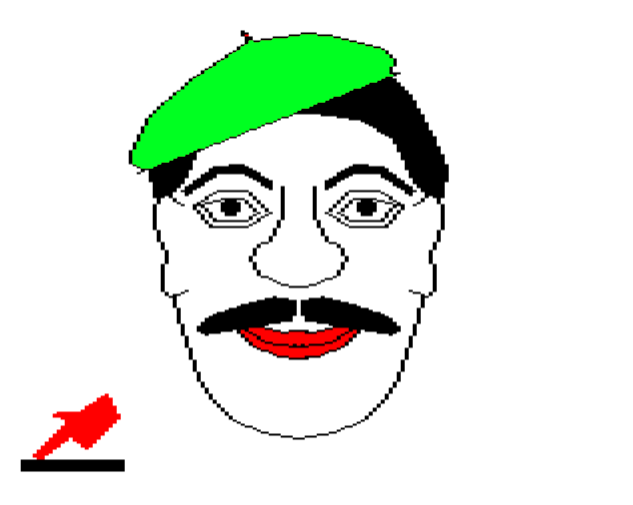 It’s a shame that Facemaker doesn’t include any colour options or a flood-fill tool, because that’d mean I could easily make a Luigi, too. Hooked on the brothers. Indeed. Actually, hang on a sec… 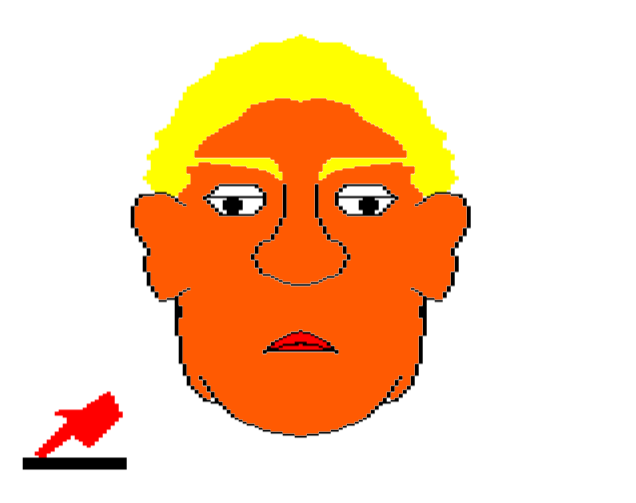 Well, that’s Trump fixed. I’m sorry to conclude this article on such an unpleasant note, but I don’t think I can wrest any more entertainment from Facemaker. Only nightmares.


Recently on VGJUNK:
Basically a pound-shop Olympics in World Games!
The fine line between mischief and terror in Gremlins: The Adventure!
Color Dreams' take on the Gulf War with Operation Secret Storm!