Today I’m going to fire up the ol’ ZX Spectrum and attempt to answer that age-old question: does boostin’ make me feel good? Let’s find out with the 1987 Spectrum spook-em-up Ghost & Booster! I usually begin each article by showing you the title screen of the game in question, but Ghost & Booster doesn’t have a title screen. That’s because it appeared on the cover tape of an Italian Spectrum magazine called Load’n’Run. The September 1987 issue, to be precise, its cover adorned by a pair of magnificent dragons squaring up to each other like two drunken club-goers during an “are you looking at my girlfriend?” moment. Leave him, Smaug, he’s not worth it.
You can see Ghost & Booster listed at the bottom of the cover, amongst other such fascinating names as Thunderland and Kill Firer. With so many games crammed onto one cover tape, you’d be right to assume that Ghost & Booster isn’t the most involved game ever coded. But who’s Booster, and what have they got to do with ghosts? 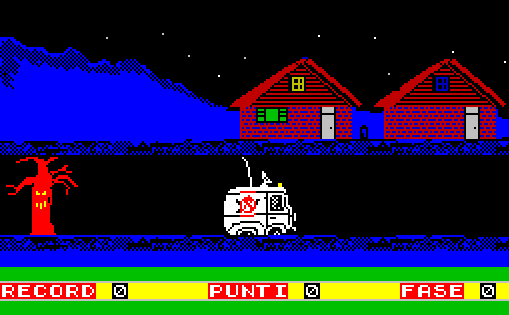 Surprise, Ghost & Booster is a Ghostbusters knock-off. What do you mean you’re not surprised? Okay, fine, so it’s not the most well-disguised title, especially if you say “Ghost and Booster” out loud. I guess “Ghostbusterz,” “Ghostbashers” and “Ghostbotherers” were already taken.
Anyway, the game begins with Ghost & Booster’s van. I have concocted an elaborate backstory explaining that this is an Italian franchise of the original Ghostbusters, and they’ve had to replace Ecto-1 with a smaller micro-van that’s more suitable for nipping through the tightly-woven streets of Rome. Perhaps it’s a Goggomobil. Did I mention this purely because “Goggomobil” is an outrageously fun word to say aloud? Yes, yes I did.
The Boostermobile trundles along the moonlit road, past the haunted “tree” (a generous description of whatever that red polyp-looking thing is) and towards some modest chalets. You do not control the Boostermobile. It drives from left to right on its own… ...until it stops and the message “PREPARATI!!” appears at the bottom of the screen. Now, I’m about as fluent in Italian as I am in ancient Sumerian but I’m pretty sure that means “get ready.” So, take the game’s advice and prepare yourself for raw, unflinching horror. 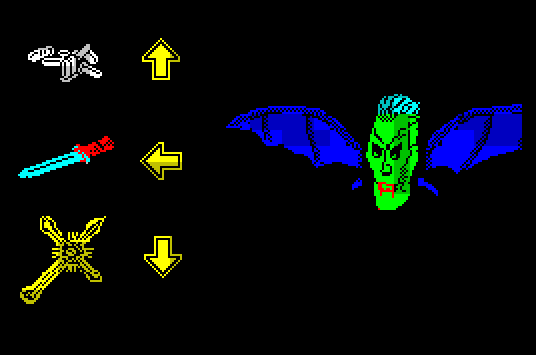 Well, I don’t know about you but I’ve been chilled to my very core. It’s a vampire… bat? I guess? A vampire who grew tired of rigmarole of transforming all the way between humanoid and bat form, so decided to split the difference and become a flying vampire head. The vampire is also ahead (pun most certainly intended) of the fashion game, sporting as he does a trendy undercut hairstyle. Unfortunately I spent so long admiring this vampire that I suddenly lost a life. 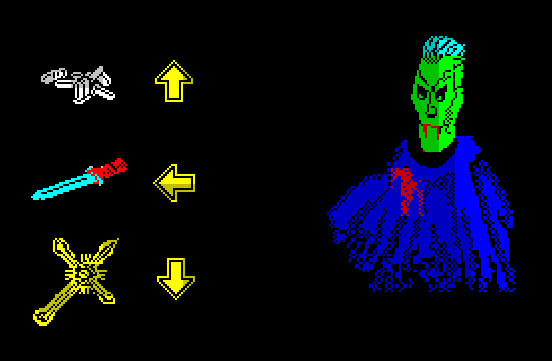 Then the same vampire reappeared, this time with less bat-wings and now wearing a barber’s cape. His fashionable hairdo takes quite a lot of maintaining, it seems.
At this point, I figured out what Ghost & Booster’s gameplay entails. It’s a reaction test, basically. A monster appears, and you have to quickly react by selecting the appropriate weapon with which to defeat them. That’s what the icons on the left represent. There’s a crucifix at the bottom and that classic ghost-busting tool A Ruddy Great Kitchen Knife in the middle, but I was at a bit of a loss as to what the icon at the top was supposed to represent. A handful of paracetamol? Pez candies? An extreme close-up of some rice? None of those thing seem like they’d be helpful in dispatching a spectre, but then neither does a knife.
In the case of the vampires, it’s obvious that you need to use the crucifix (although I’ve played enough Castlevania to know that throwing knives at vampires can work) but the problem was I didn’t know how to use the crucifix. I couldn’t get a joystick to work and trying each individual key on the keyboard was a level of effort that Ghost & Booster does not warrant, so I went looking for a copy of September 1987’s Load’n’Run magazine.

To my surprise, I managed to find one. It taught me a few things about Ghost & Booster. It was programmed by one Gb. Aicardi, and sometimes it’s called Ghost & Boosters, plural. More importantly, I learned that the controls are E, S and Z for up, left and down respectively. I even learned that the top icon is supposed to be silver bullets, because they’re mentioned in the magazine as “proiettili d’argento” and I’ve spent enough time playing as the Kingdom of Italy in Battlefield 1 to know that proiettili means “bullet.” 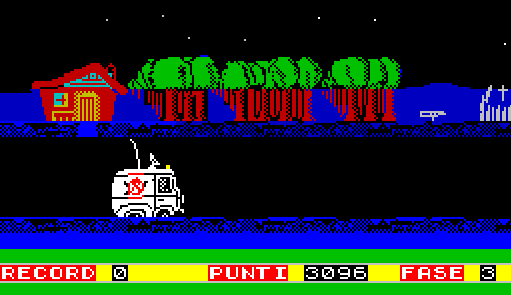 Having figured out a) what the game wants me to do and b) how to do it, I managed to clear the first set of five or so monsters that popped up by selecting the right tool to defeat them. Then the Boostermobile trundled along a little further, moving on to the next screen before another set of monsters attacked. That’s the entire game. React to the monsters, move forward, repeat. It’s not just vampires and vampire heads standing in your way, however. 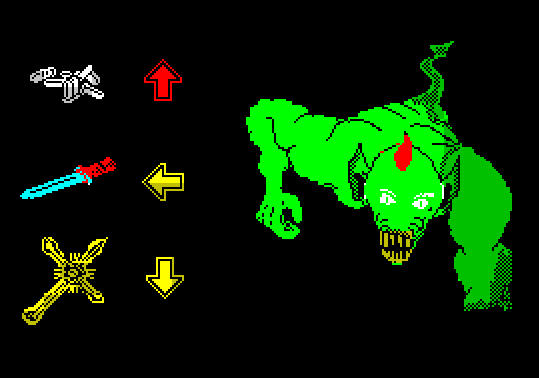 You’ll be attacked by a hideous green lizard-genie hybrid sometimes. Its weakness? Bullets. If they’re silver bullets, does that mean this thing’s supposed to be a werewolf? I hope so, because then I can imagine a much more interesting version of the Twilight movies where this thing makes googly eyes at Kristen Stewart. 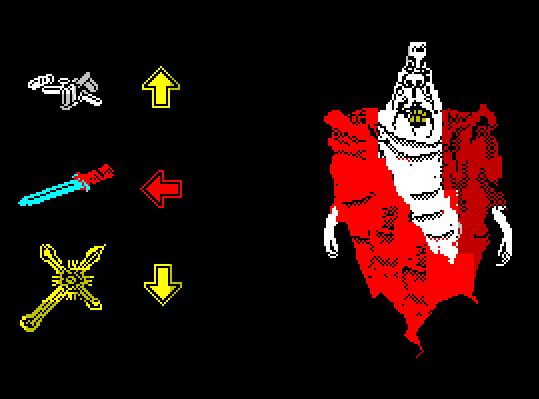 Or how about this chap, who appears to be the ghost of a turd struggling to escape from a heavily-shoulderpadded eighties power suit? He looks familiar, and my first thought was that he was a ghost from the Real Ghostbusters cartoon but I can’t seem to find any hard evidence of that. Forgive me, but it’s not like I have an encyclopaedic knowledge of the Ghostbusters cartoon, which is strange because I spent around seventy-five percent of my childhood watching the Ghostbusters cartoon. The other twenty-five percent was playing with Ghostbusters toys and being bitter that I never had the firehouse playset.
This ghost is vulnerable to the knife. Somehow. The Ghostbusters could have avoided a lot of trouble with the Environmental Protection Agency if they’d stuck to carrying guns and knives rather than unlicensed nuclear accelerators. 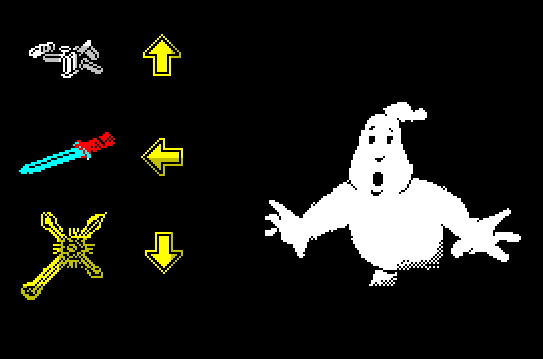 Lastly, there’s this familiar face. It’s the ghost from the Ghostbusters logo, free from its confinement and ready to wreak havoc on the land of the living! What tool can I use to send it to an eternal rest? None of them seem very practical. Using the silver bullets seems like a lawsuit waiting to happen if anyone happens to be standing behind the ghost, the knife would surely pass straight through it and I don’t think the ghost is religious enough for the crucifix to have any effect. Fine, I’ll try the knife. Oh no, it was a trick! Attacking this ghost causes you to lose a life, with this message appearing - “You don’t have to kill the little ghost” is how I’d translate it. There’s a lot to unpack here. Firstly, “fantasmino” is a wonderful word that I’m going to try to use more often. Secondly, I know I don’t have to kill the ghost. It’s already dead. It’s a ghost. Thirdly, it’s very strange that they chose this specific ghost to be the one you don’t harm, because the Ghostbusters’ logo is very clear that this ghost in particular should be dealt with, and it’s not like I have any way to imprison the bloody thing. So, what you do is you ignore this ghost whenever it pops up. It’s a red herring, you should let the little fantasmino live. Okay, not live, but continue to exist even if it is intent on committing suicide by Ghostbuster. 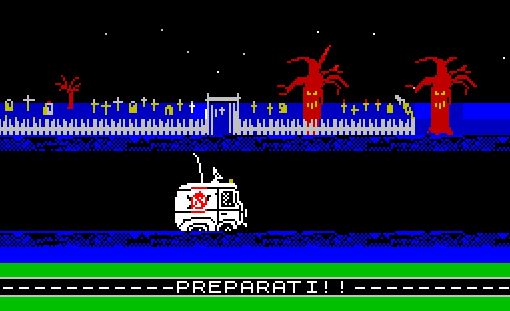 To reiterate, that’s the entire game. Every time you clear a round of ghost attacks, the next set gives you less time to press the correct key before you lose a life. By the time you reach the third screen, the ghosts attack so quickly that you don’t have time to react so you’re reduced to guessing which monster is coming up next, and I’d like to take this opportunity to apologise to fantasmino for all the times I accidentally shot it. 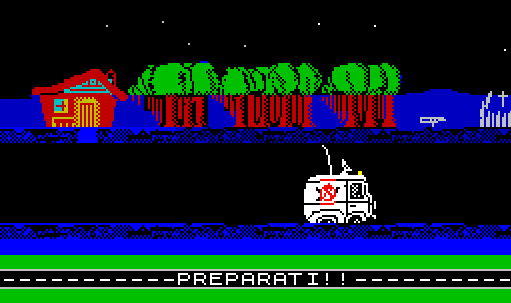 With much scumming of save-states I managed to get about five screens in, but the backgrounds had started repeating and nothing new was happening so I feel confident in saying I’ve explored Ghost & Booster to its deepest depths. Those depths might barely lap around my ankles, but I had fun all the same, because spooky ZX Spectrum graphics, misshapen monsters and blatant copyright infringements are all things I enjoy spending time with. I couldn’t call it a good game because it’s hardly a game at all, but a fun little thing to mess around with for ten minutes? Absolutely. For added enjoyment, listen to the theme from the official ZX Spectrum Ghostbusters game at the same time. You won’t regret it, unless the maniacal voice sample at the beginning creeps into your nightmares. I admit that is a possibility.


Recently on VGJUNK:
Superman? Never heard of him. This is Sunman!
Unreleased ninja action in Hangzo!