Merry Christmas – because it’s both a holiday greeting and the title of today’s game, you see. That’s efficiency, that is. Yeah, I decided to cover another quick Christmas-themed game. I thought about playing Alien vs. Predator again and just pretending it takes place in late December, because you can’t prove that it doesn’t, but in the end I settled for Melbourne House’s 1984 Commodore 64 stocking filler Merry Christmas! 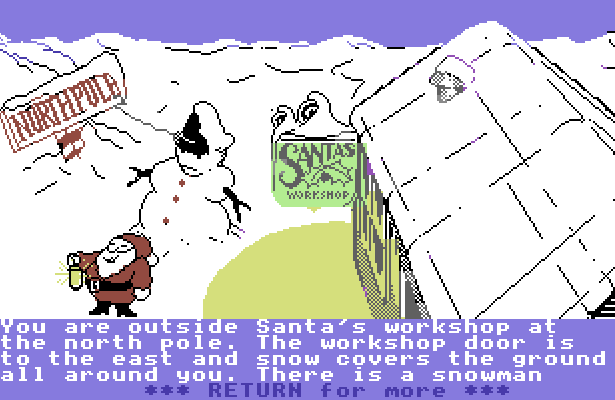 With no pointless fripperies like title screens or instructions, Merry Christmas drops the player straight into the action, if you can use the word “action” to describe a graphic adventure. I’m sure you know the drill for this kind of game: type in commands, collect items, solve “puzzles” and move between locations until you reach the end of your quest. In this game you’re playing as Santa, and even though the game itself gives you zero guidance about what you’re supposed to being doing, you’re playing as Santa Claus. “Delivering presents” seems like a solid bet.
So, what do we have at the North Pole? Well, Santa’s Workshop, obviously. The snowbound cottage is a much quainter abode than the city-sized Christmas megaplex from the last article, and as a result it feels much more Christmas-y. There’s also a miserable-looking snowman that appears to be wearing a policeman’s helmet, the actual pole that the North Pole is named after and Santa himself. This incarnation of Father Christmas is particularly rotund, with a belly that’s not so much a bowlful of jelly as an overinflated basketball, but I suppose there’s not much to do between Christmases when you’re stuck at the North Pole, besides overeating and making snowmen.
The first thing I tried was entering Santa’s workshop, but the door is locked and I don’t have the key. Better get to exploring, then? 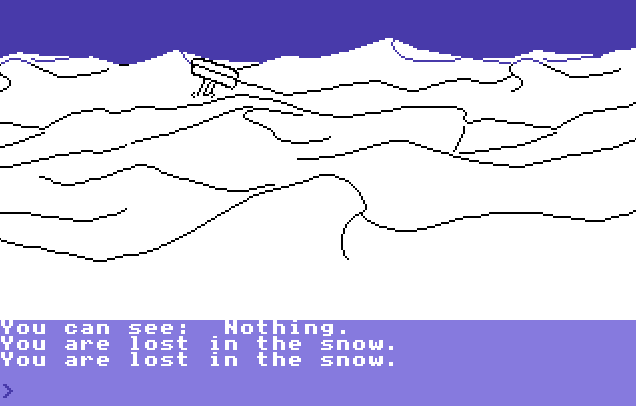 And this is why polar exploration is a life-or-death struggle against the extremes of nature, folks. I took one step away from the workshop and immediately became lost amongst the vast snowy plains, with every direction leading to yet more snow and the imminent embrace of hypothermia. Okay, not hypothermia. I’m Santa, and Santa has magical cold-repelling powers. That’s how he survives riding through the sky in an uncovered sleigh during winter.
Eventually I figured out that when the signpost appears at the top of the screen, you can head north to go back to the workshop, so let’s do that and have another look around. 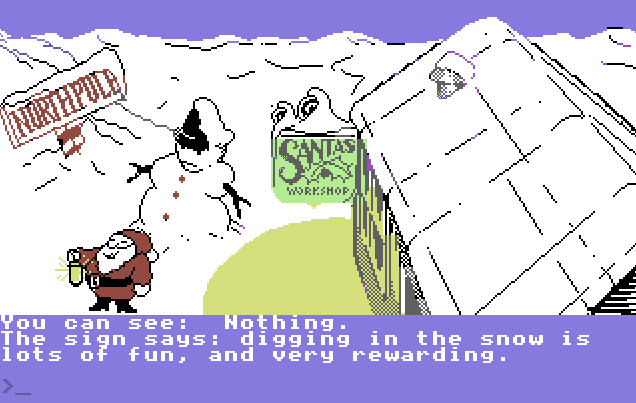 I read the sign this time, and it says “digging in the snow is lots of fun and very rewarding.” Kind of a weird sign to find outside Santa’s workshop, honestly. You’d expect it to say “Santa’s Workshop,  all visitors must report to reception, photography prohibited” or “you don’t have to be a jolly old elf to work here, but it helps!!” or something. Who is this sign even for? The elves? Elves aren’t into digging, that’s work for filthy troglodyte dwarves. 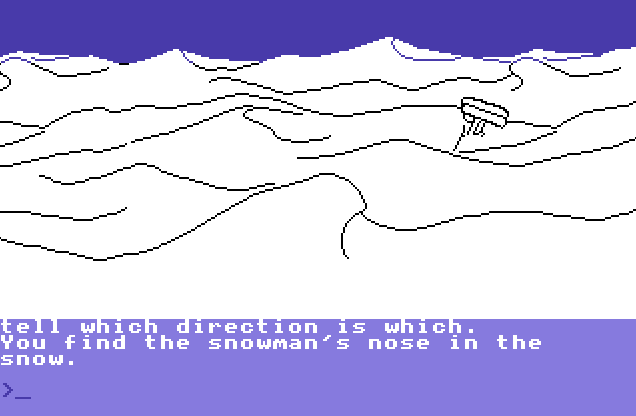 I headed back to the snow fields and did some digging. Mostly I just got cold fingers, but eventually, I found the snowman’s lost nose. All right, now we’re making progress. We give the snowman his nose back and he gives us the workshop key, right?

Oh for pity’s sake, snowman. Get it together. Hang on, “lost forever”? The carrot-nose fell off the snowman’s face. Unless the arcane forces Santa employs to travel the world in a single night are leaking and effecting the surrounding area, the nose is on the ground in front of the snowman. Maybe the snowman hates having a raw carrot rammed into the snowy flesh of his face and this is all a ruse to get Santa to leave him alone. You know what? Forget about it. I didn’t even get anything for bringing the snowman his nose, not even the workshop key. To find the key, you have to use the DIG command on this screen. So I did, got the key, and now I’m in the workshop. 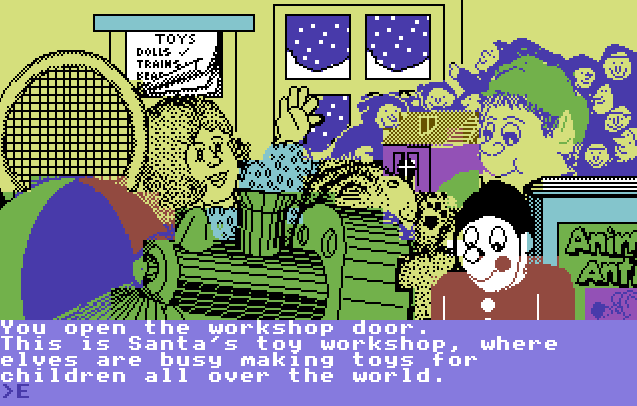 Here’s where the elves are hard at working, making toys for all the good girls and boys. Even in 1984 toy soldiers and beach balls were old hat when it came to kid’s presents, but that’s always the way with Santa’s workshop, isn’t it? You rarely see the elves assembling flick knives and molly tablets or whatever kids these days are into. Not that Santa’s totally stuck in his ways, of course. Combining a pile of dolls into a writing mass of blankly smiling faces is going to make some lucky kid’s Christmas morning real interesting. 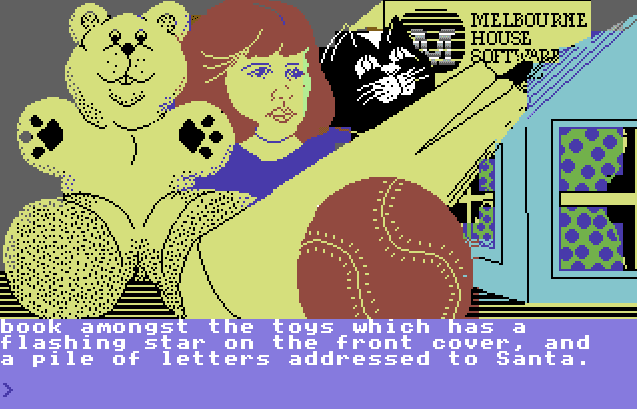 In the next room are more toys and also a real human child. That can’t be a doll, can it? It looks far too, well, real. Maybe this is what happens when a child near the top of the “nice” list asks Santa for a little sister. Don’t let it distract you from the face on that teddy bear, though. That thing looks like it’s just farted and it’s waiting for your reaction when the smell reaches you.
Also in this room are a pile of letters to Santa and a book with a flashing star on the front, so let’s read those, starting with the book. 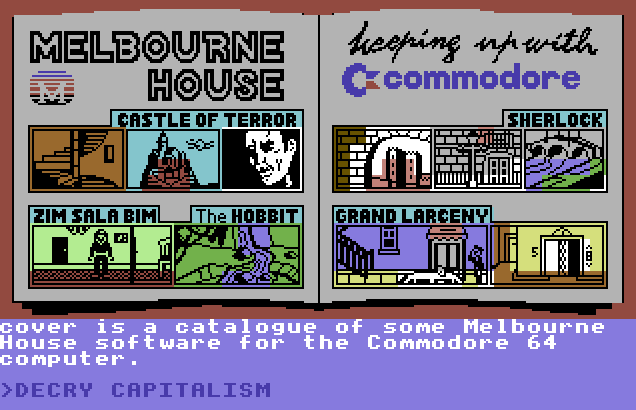 Surprise, the book is nothing but an advert for other Melbourne House games! Yes, nothing fills me with the Christmas spirit like the phrases “Grand Larceny” and “Castle of Terror.” The secret of Merry Christmas is that it’s not actually a “real” game, but rather a mail-away offer that appeared in Commodore User magazine. You sent in a coupon plus ninety-five pence and received a stealth advertisement in the form of a mini Christmas adventure game. There’s nothing more seasonally appropriate than using Christmas as leverage to make more money, after all. 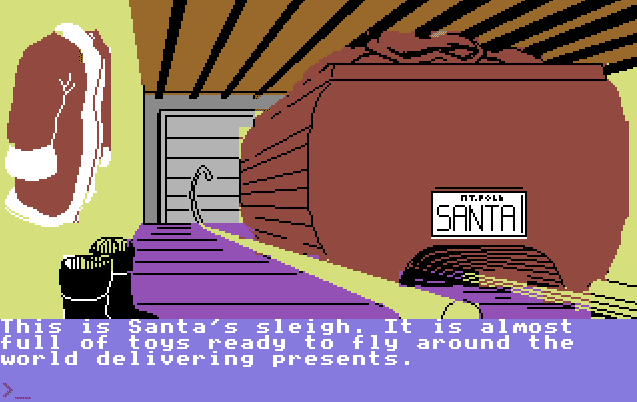 I also read the letters to Santa, and naturally they tell you what gifts the children want for Christmas. In this case they wanted cricket bats and dolls, so it’s a good job Santa’s got plenty of those laying around. This is the central “puzzle” of the game, then, although obviously it’s not a puzzle at all and you just have to pick up the right toys. However, this was the point where I had to turn to a guide for Merry Christmas. Nothing makes the festive season sparkle like being made to feel like an idiot by a thirty-year-old advertisement in the shape of a computer game. The problem was that I didn’t pick up a sack to put the presents in. In my defence, as far as I could tell the game never mentions that there is a sack, even after I examined every screen. So, I checked the guide, stood on the appropriate screen and typed in GET SACK. Then I could put the toys in the sack, and now all that’s left to do is get the sleigh up and running. 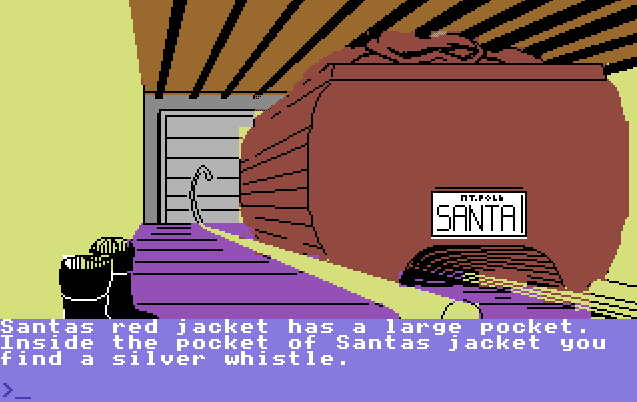 At least I managed to figure that part out for myself. You can take Santa’s coat off the wall and look inside the pocket to find a silver whistle with “R” written on it. Assuming the R stands for Rudolph and it’s not a musical instrument from Santa’s collection of otherworldly artefacts that’s tuned to the key of R, I reckon this will get things moving.
I can’t believe Santa has a personalised number plate, though. I thought you were better than that, Santa, but you’re as cursed by vanity as the rest of us. 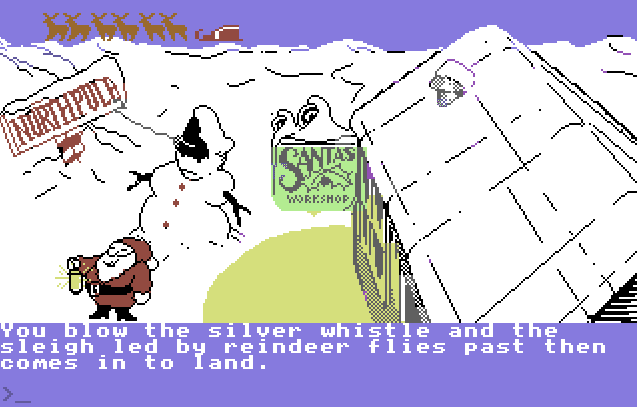 The whistle does indeed summon the sleigh. There it is in the background, coming in for a landing. The rest of the graphics in this game have been okay but I must admit the sleigh looks a bit rough. It’s probably just because it’s in the distance, though. I’m sure it’ll look better once it gets up close. 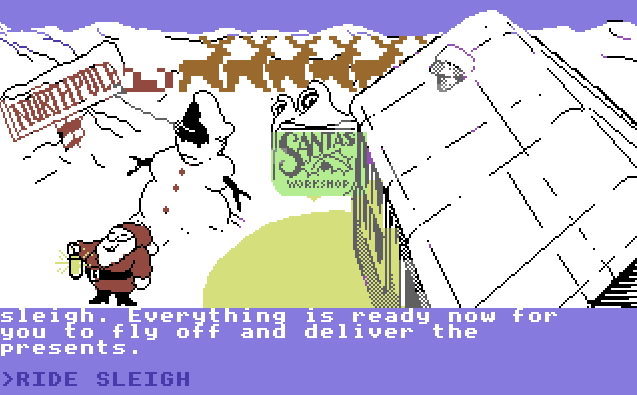 Or maybe not. “Sorry boss, we just flew in from an Atari 2600 Christmas game and we didn’t have time to change,” say the reindeer. Never mind, it doesn’t matter The kid’s aren’t going to see the reindeer anyway because everyone knows Santa and his sleigh can only slide into your pocket of reality when you’re asleep, to protect you from accidentally witnessing the unfathomable forces that power Father Christmas’ entire operation.
With the sleigh in place, all that’s left is to PUT SACK IN SLEIGH, climb aboard and tell the reindeer to go up and that’s it, Merry Christmas is complete. 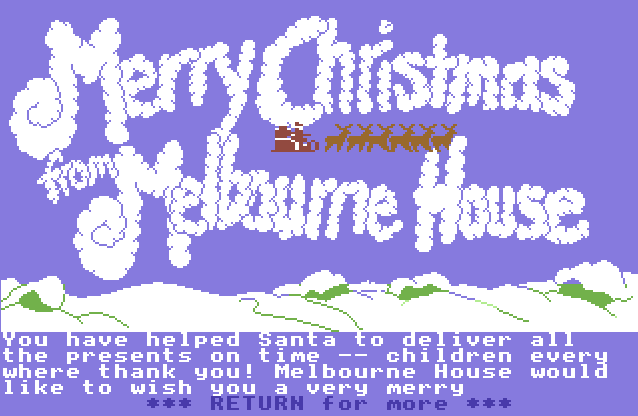 And that’s your lot. Like I say, it’s not really a “proper” game, although it kinda fails as an advertisement, too: playing this graphic adventure with lame puzzles, hard-to-find sacks and pointless snowman noses is not likely to make me seek out further Melbourne House graphic adventures… although obviously I’m going to be intrigued by any game called Castle of Terror, so maybe it did work. Merry Christmas was a decent enough way to pass half an hour of a late December evening, I suppose, and hey – by writing this article, I’ve managed to put off making this year’s round of mandatory phone calls to distant relatives. I’d call that a win.