It might surprise you to learn that I’m not a great dancer. I know, right? Videogame blogger in “dances like electrocuted chicken” shocker. Well, that’s what videogames are for. They can help you pretend you’re good at things that you aren’t good at, like how years of playing Football Manager means I could definitely lead my local school’s under-fifteens football team to Champions League glory if they’d just give me a shot. Anyway, hopefully today’s game can protect my fragile ego and keep alive the dream that I am at least slightly funky – it’s Phoenix Game’s 2004 Playstation “dance” game Rhythm Beat! 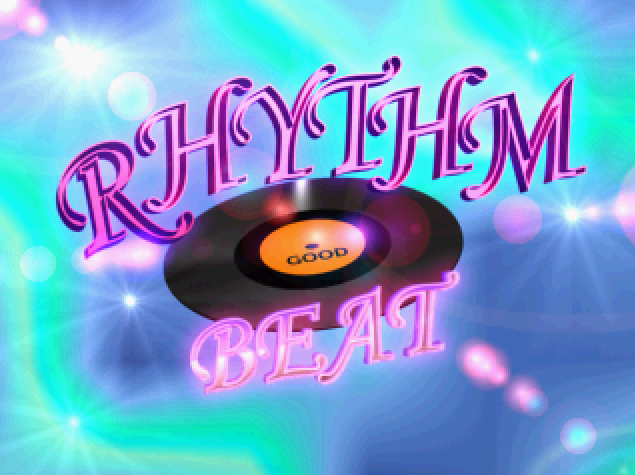 Ah yes, Phoenix Games. You might be familiar with them already, because they’re famous as probably the worst publisher of the PS1 / PS2 era (and beyond,) a company that specialised in releasing ultra-low-budget games including digital colouring books, knock-offs of Disney properties and White Van Racer. That said, even if you didn’t know who Phoenix Games were this title screen simply screams “incompetent shovelware.” The WordArt-looking logo in a stock font, the low-effort graphics on the record, more lens flare than a five-hour documentary on J.J. Abrams’ directorial career: Rhythm Beat’s title screen has it all. 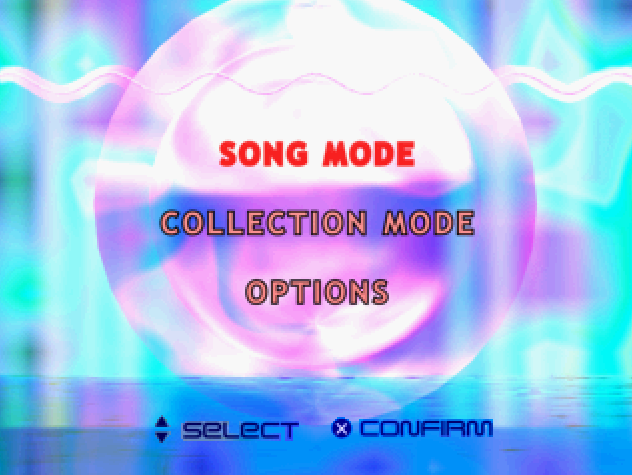 Things don’t look any more impressive once you get to the menu. I don’t care how many soft pastel colours you douse it in, that’s still a dinner plate in the background.
I think I’ll begin with Song Mode, because Collection Mode sounds like it’ll take a while and I need to find out just how terrible this game is before I commit my time to Collection Mode. Okay then, what songs do you have, Rhythm Beat?  The latest chart-topping smashes from the world’s greatest recording artists? 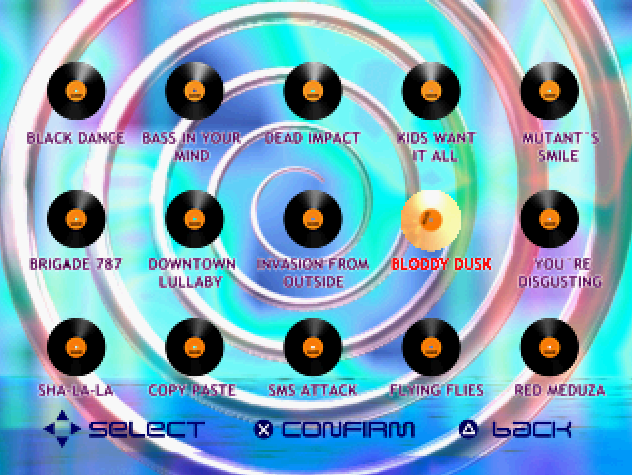 Or, you know, a bunch of tunes cobbled together in the cheapest music tracker software the developers could find. Fifteen tracks is actually way more than I was expecting this game to include, but obviously the best thing about them is their titles. Who could fail to be intrigued by a song called “Mutant’s Smile”? Then there’s “Bloddy (sic) Dusk,” which sounds like the subtitle to a bootleg Castlevania game, or “SMS Attack” which I assume is a three-hour rock opera about a Sega Master System laying waste to humanity. I honestly can’t decide which is my favourite. It’s either the sheer redundancy of “Flying Flies” or “Copy Paste,” which will seem pretty goddamn appropriate when we get to the gameplay. 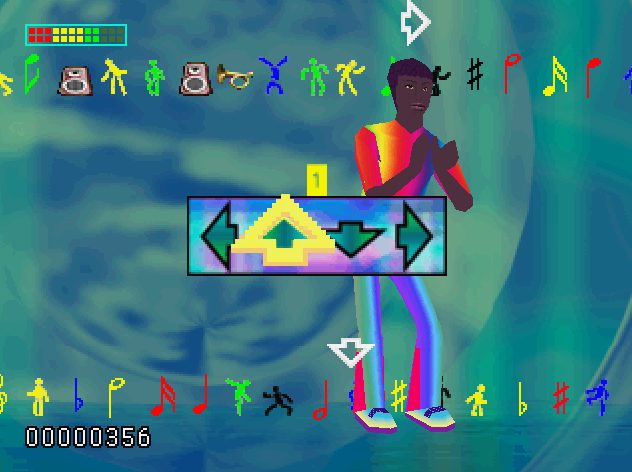 Okay, so I picked a song and a blocky polygon man appeared and started dancing. Well, moving. Okay, jerking around the screen seemingly at random and in no way in time with the music. I don’t think he’s even supposed to be dancing, I think he’s desperately struggling to remove that shirt before it consumes him entirely. It’s not an item of clothing, it’s a parasitic life-form that has evolved that colouration to confuse the Predator’s heat vision. This is what Rhythm Beat offers in terms of graphics, then: shambling, barely human shapes in horrendous outfits. That’s right, “barely human shapes” plural, and they’re all quite upsetting to look at. 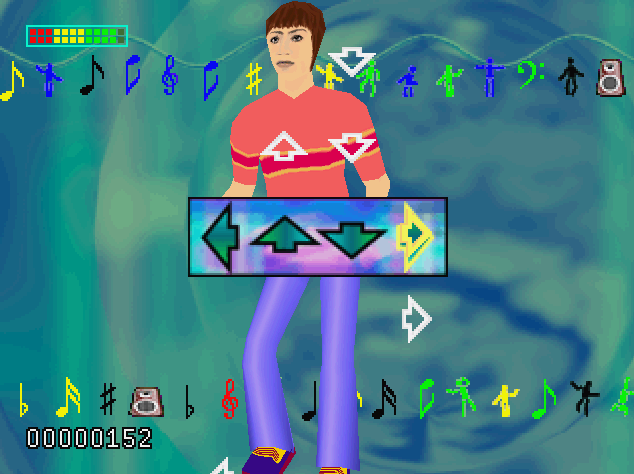 For instance, look at this guy with his “school classmate whose parents are weird religious types” haircut and his Voldemort nose. At least his outfit is better than the first guy’s, although the clown he stole those shoes from is going to hunt him down and extract his bloody revenge any minute now, I’m sure. 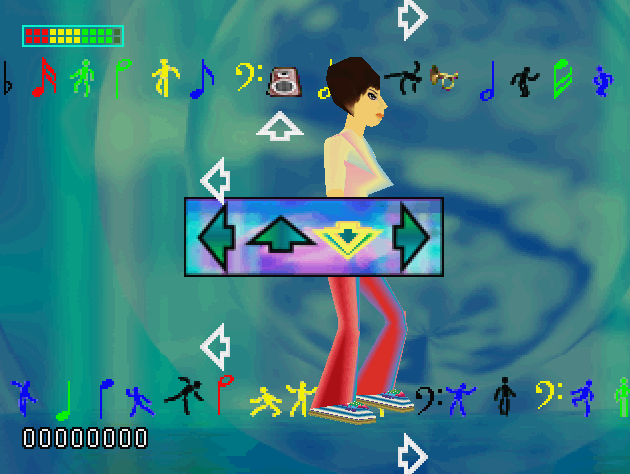 There are also some female dancers, and if you thought Lara Croft’s PS1-era triangular boobs were impressive then get a load of these. Now we know where the iceberg that sank the Titanic went.
Okay, okay, the gameplay. It’s Dance Dance Revolution. That’s it. An utterly shameless DDR knock-off with no attempt made to add anything new or unique. Arrows corresponding to directional inputs scroll down the screen, and you have to press the right direction on the d-pad (or the corresponding face button) as the arrow passes over the marker in the centre of the screen. You can use a dance mat peripheral too, if you like. Obviously I didn’t, because buying anything that makes videogames less sedentary is anathema to me, but the option is there. Hit a bunch of notes in a row and you’ll get points and a combo going, miss too many notes and you’ll fail. 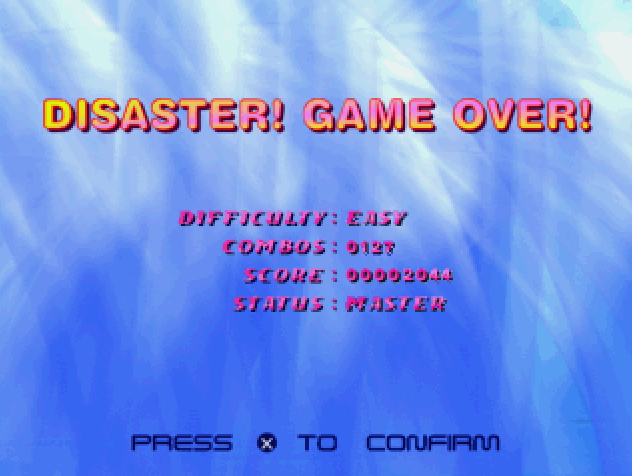 Failing is exactly what I managed to accomplish the first time I played Rhythm Beat. “Disaster! Game Over!” it says, and, okay, two things: you’re really devaluing the word “disaster” here, and also I was awarded the rank of “Master” for my failure. Make up your goddamn mind, Rhythm Beat. 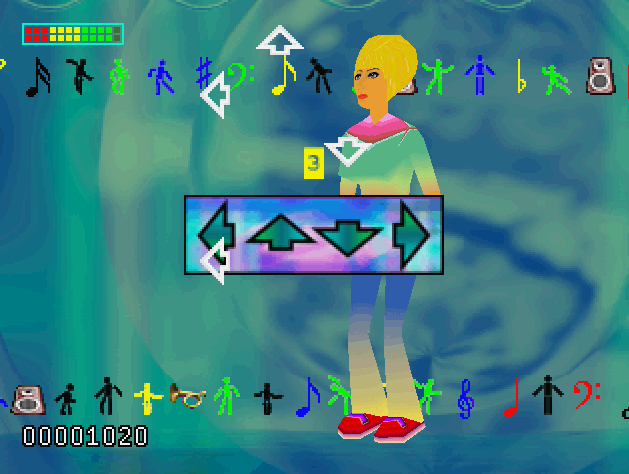 There was a very simple reason that I failed on my first attempt: I made the mistake of assuming the notes I had to hit were in some way synched up to the music. They are not, at all. The music and the note patterns are completely unrelated. You can turn the volume right down and it will actually make the gameplay easier, because you won’t be distracted by the beat of the music. It’s astonishing, it really is. Phoenix Games have created a rhythm action game with no action and no rhythm, completely ignoring the entire point of the genre and dragging Rhythm Beat down from merely a bad game to one that’s existence is absolutely pointless.

The very basics of the game might be horribly broken, but at least you get to see these characters busting out their dope dance moves. Apologies for the much-larger-than-usual GIF, but I’m sure you’ll agree it was important that I captured this in all its glory. Thanks, Rhythm Beat, for making me feel better about my own dancing skills. 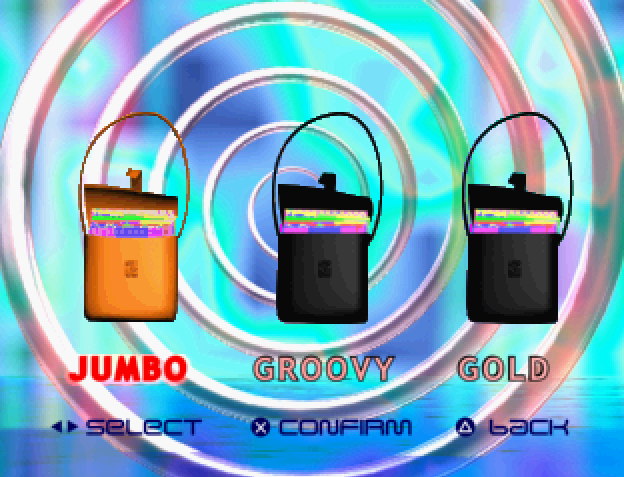 I decided to give Collection Mode a go, which led me to the spectacularly unhelpful selection screen. Jumbo, Groovy and Gold might be good code-names for a disco-based superhero team, but they’re not exactly telling me what I’m letting myself in for here. 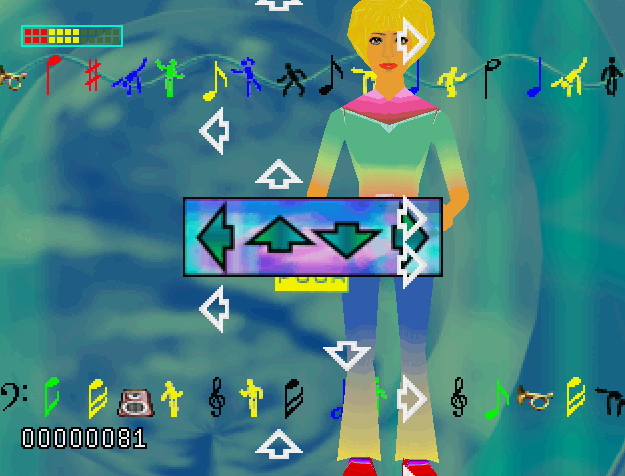 All right, so it turns out that in Collection Mode you just play through five song in a row. There’s nothing to collect or anything like that, and when you reach the end it just stops and you’re sent back to the title screen. Fortunately, I was ready for whatever Rhythm Beat could throw at me and I even moved up from easy to hard difficulty, which I aced because by this point I’d figured out Rhythm Beat’s mechanics. I’d already managed to mentally separate the arrow patterns from the music, but as it happens that doesn’t even matter and anyone can beat any song in this game on their first attempt. 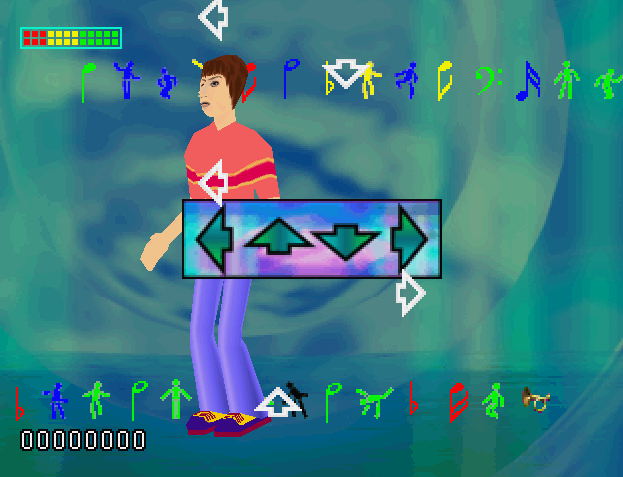 Here’s the thing: there’s no punishment for hitting the buttons when the arrows aren’t in the right place. You’d expect a mistimed button press to count as a missed note or to at least make you drop your combo, but that’s not the case. So, let’s say the next note coming up is a right-facing arrow. Rather than waiting for it to line up with the hit marker and then pressing right, you can just keep tapping right on the d-pad / pressing circle / stomping on the “right” segment of your dance mat until the arrow reaches the hit zone and voilà, you’ve just hit the note. Sometime you have to hit two directions at once, for example up and down, but the window for success is generous enough that you can just flick both directions alternately and you’ll still hit the notes. It gets better, though: I played Rhythm Beat with a gamepad that has an analog stick rather than a d-pad, right? This meant I could clear every song without even looking at the screen simply by rotating the analog stick at a reasonable speed. So I did. Look, why should I bother playing this game properly if the developers couldn’t be bothered to make it properly? 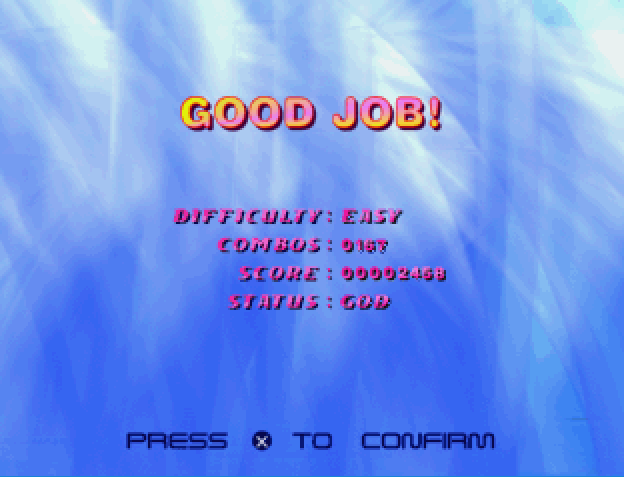 Status: God. Thumb status: a little tired from rotating the analog stick for three minutes.
Hopefully all that has sufficiently explained that Rhythm Beat’s gameplay is so bad you’d be justified in saying it doesn’t even exist, and, well, you can see the graphics, but this is nominally a music-based game so what’s the music like? Actually – and this was a real shock for me – the music is the most competent part of the whole sorry affair. You couldn’t call any of it “good” (with maybe one or two exceptions) but for the most part it’s not nearly as bad as I was expecting.

This is “SMS Attack,” and it’s pretty typical of most of the music in Rhythm Beat: fairly generic electro/trance type tracks with the occasional strange flourish and a slower tempo than you might have expected from a dance game. They’re… inoffensive, that’s the word I’d use. However, some of the tracks go right off the rails when they try to use synthesised version of real instruments, which uniformly sound awful. There’s an electric guitar noise that sounds more like a malfunctioning electric toothbrush, for example, or some synth horns that must have been created by someone with a bitter grudge against the very concept of brass instruments.

There are one or two decent tracks, though. I genuinely like “Dead Impact,” especially after about thirty seconds in when the vaguely “Eastern” sounding synth lead kicks in. It’s got a pleasingly mysterious vibe to it – I could see this as the “exploration” theme in a cyberpunk dungeon-crawler, and it’s reminding me of Shin Megami Tensei without sounding much like it’s from a SMT game. 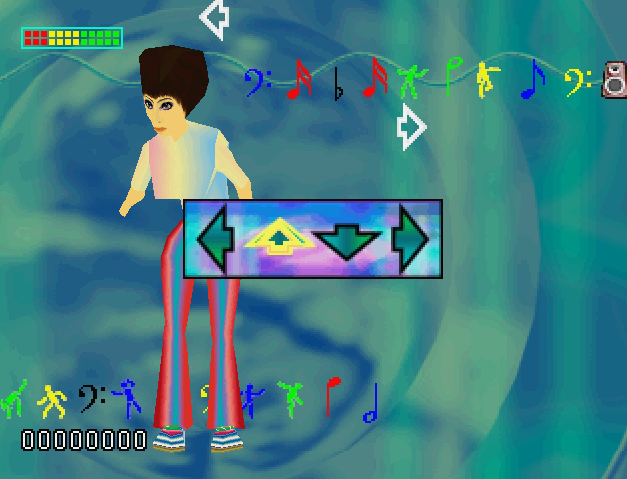 Apart from the music not quite being totally hateful, Rhythm Beat is a terrible game that fails on almost every conceivable level and as such it must go down as one of the worst games I’ve ever played… and yet I can’t bring myself to hate it. There’s something about its incredible dumbness that affords it a layer of protection, and while objectively I should be at least a little angry at the time I wasted playing it I can’t get mad about a music game with a track called “You’re Disgusting.” On top of that, ever since I played it I’ve had “Beat Surrender” stuck in my head, and considering the kind of music I usually get stuck in my head that is a bloody godsend.