Here’s a quick article about the unnecessary over-complication of poultry farming. Getting eggs out of chickens is something mankind has been doing for a long time without the need for complex pipework or catapults, but that didn’t stop Bally Sente from releasing the 1984 arcade game Chicken Shift! 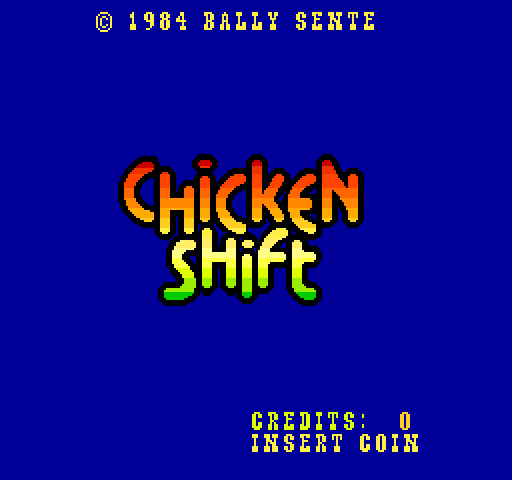 You see, it’s a title that works on two levels. The game is literally about shifting chickens, and it’s also a pun on the phrase “chicken shit,” oh ho ho. I said it worked on two levels, not that it worked well – you’d think when you’re naming an entertainment product you’d want to avoid having consumers associate it with the word “shit.” But what do I know? I have the word “junk” in the name of this site and it doesn’t seem to have put people off. Maybe they appreciate it as an honest assessment of the site’s content.
Anyway, here’s the game’s title screen. Not much to say about it, really. You’d think a game so heavily based on chickens might have included a picture of a chicken to draw the chicken-lovers in, but no. Instead you get a boring logo and some text in the “wild west” font. Don’t get excited, though, there’s nothing wild west themed about Chicken Shift, which sucks because I had a terrible Red Egg Redemption pun all lined up. 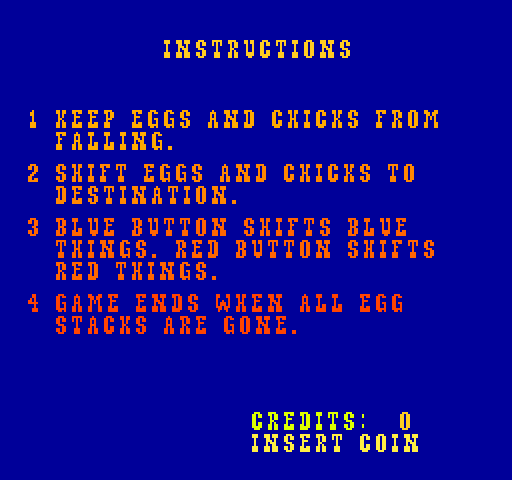 Here are the game’s instructions, and as you can see it really is all about shifting chickens, as well as eggs. It’s a simple set-up, so simple there isn’t even a joystick: you have one button for shifting “blue things” and another for shifting “red things,” which might go down as the least-illuminating instructions I’ve ever seen on an arcade game. Not to worry, I’m sure I can figure it out. 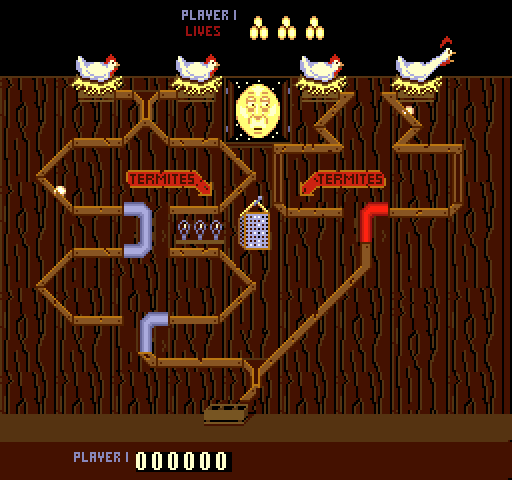 This is the first stage, and the goal is to put all your eggs in one basket. Hmm. Chickens are nesting high up in the rafter, presumably placed there in an attempt to protect them from marauding foxes, and they lay eggs. All these chickens seem to have rather large combs on their heads. Are they roosters? That’d explain why the one on the right seems to be having such a hard time laying an egg.
So, once they eggs are laid, they roll down the intricate network of rails, troughs and pipes, and it’s your job to guide the eggs safely down to the bottom by using the two buttons to swap the positions of either the red or the blue tubing. For example, in the screenshot above you can see that on the left there’s an egg that will roll into the C-shaped bit of pipe. However, if you leave it in that position it’ll roll down the left-hand side and eventually fall through the gap in the track unless you press the “blue thing” button to swap the position of the L-shaped pipe, like so: 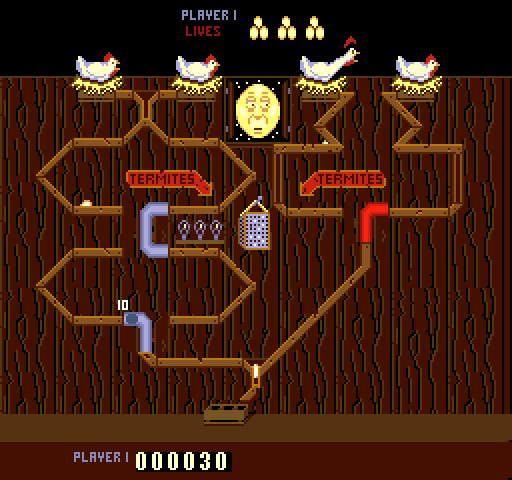 That’s it, really. Multiple eggs roll down the chutes at once, so you have to pay attention to multiple areas of the “board” at the same time. The haunted, weary face of either the moon or Thomas the Tank Engine surveys proceedings with a melancholy air. The eggs roll so slowly I’m going to assume the chutes are filled with treacle. Once the basket at the bottom is full of eggs, the stage is over. So far, so simple, but as you can imagine things get rather more difficult as the game progresses. 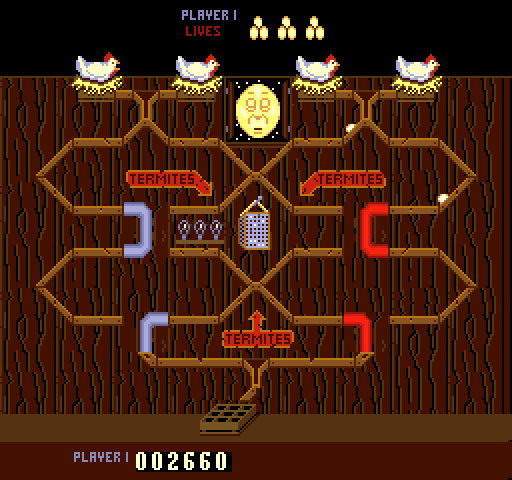 For example, stage two expands the layout of the chutes so you have another red thing to deal with. The moon / living train slave has fallen asleep, having already become bored. That’s kinda fair enough – these early stages are not particularly interesting, mostly because they’re so easy. Again, that won’t be the case for long. 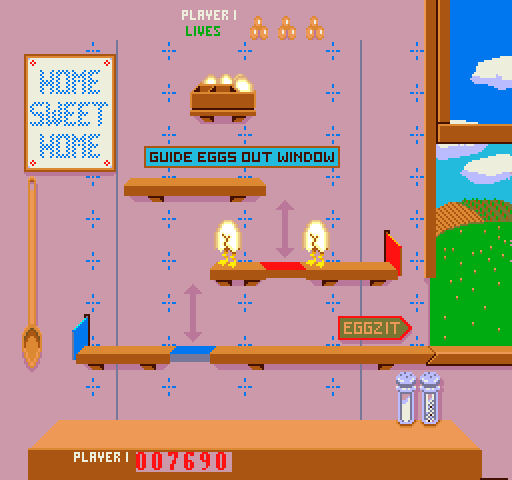 Stage three is completely different. Okay, not completely different because it’s still about shifting red things and blue things, but the set-up has changed considerably. It turns out the eggs you so neatly packaged in the previous stage had all been fertilized, and chicks inside are breaking free of their calcified prisons just in time to avoid becoming part of a fry-up in this quaint country kitchen. Wracked with guilt about getting them into this situation in the first place, the player must guide the waddling Orson’s Farm rejects to safety via the open window. Ha ha, “eggzit.” 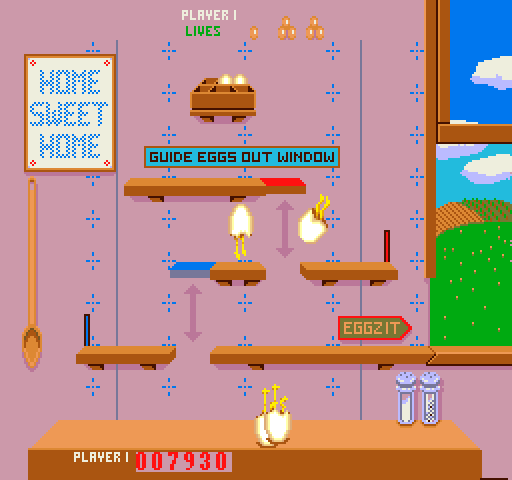 In this mode, the red and blue buttons operate the red and blue lifts and barriers along the shelves. Moving the blue lift up lowers the blue barrier and so on, and the aim is to lower the elevator while the eggs are standing on it and make sure the barrier is up when they reach the edge of the shelf otherwise they’ll walk right off and… I was going to say “die,” but they don’t. They just get stuck upside-down, but if you allow too many eggs-on-legs to fall you lose a life. There’s not much else to say about this stage, apart from wondering about the purpose of that weirdly elongated wooden spoon on the left. Why is it so pointy? Maybe it doubles as a spear, so you can use the spoon to hunt down your lunch and to baste it in its own juices. 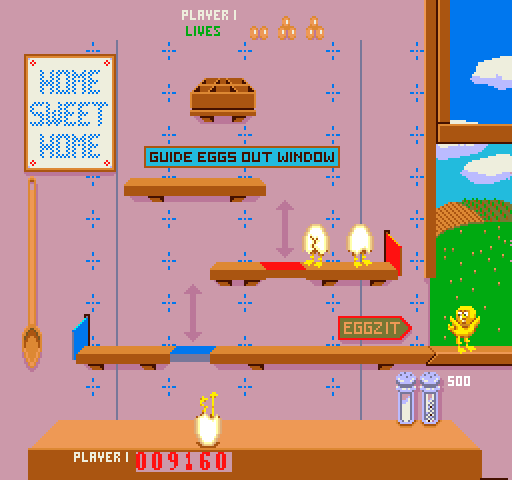 If a chick reaches the window, it casts off the remainder of its shell and flies away far into the distance, further emphasising that the developers of this game really didn’t understand how chickens work. 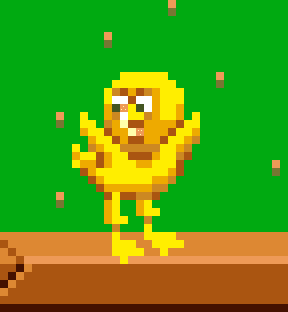 Also, you’d think that if there’s one animal that it’d be easy to make look cute it’d be fluffy little baby chicks, one of the by-words for cuteness itself. However, when the ones in Chicken Shift turn to face the camera, they are not cute. I think it’s the eyes. They’re too much like human eyes. 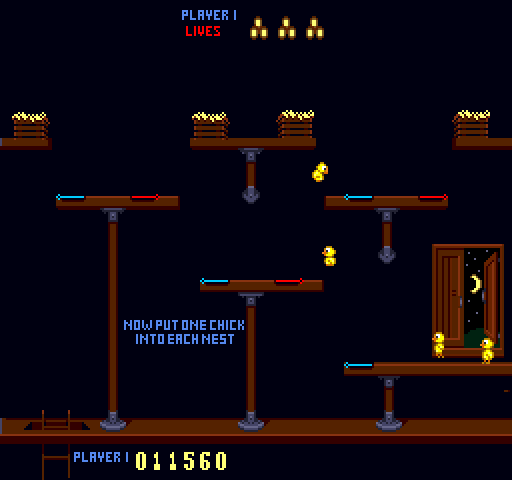 The final kind of stage is the most baffling. The chicks have returned, centuries of human interference in their breeding habits having rendered them unable to survive in the wild. It’s your job to guide them back to the safety of the boxes at the top of the screen, where they will mature into full-grown chickens and thus complete the ciiiircle of liiiife. To get them up to the boxes, you have to use a system of catapults. That’s pretty incredible, and I must admit there is something genuinely amusing about watching a hapless chick wander onto a springboard, only to be launched up into the air at the touch of a button. It’s as though the developers wanted to make a pinball game where the ball was replaced by baby chickens, but decided that was a bit too cruel. 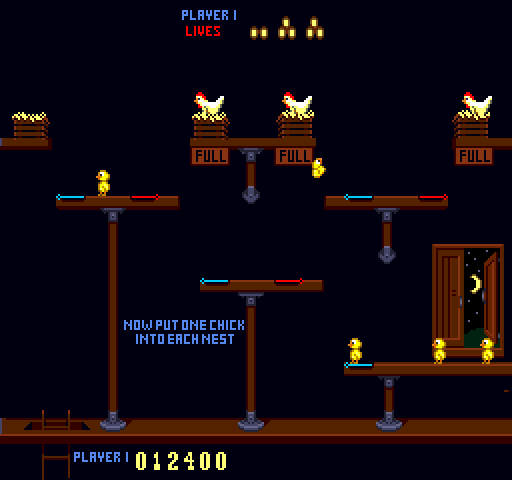 Flipping them around with catapults is fine, though. They’re hardy little cluckers, and the previous stage showed they were more than willing to fly, so I’m just giving them a helping hand.
The goal is to get one chick into each box, and as always you’ve only get the red and blue buttons to work with. Blue catapults fling the chicks to the left, red catapults fling them to the right, you’re allowed a small mount of chick casualties before you are deemed a failure. Deliver the fuzzy-wuzzy cargo to the boxes and you’ll move on to the next stage… 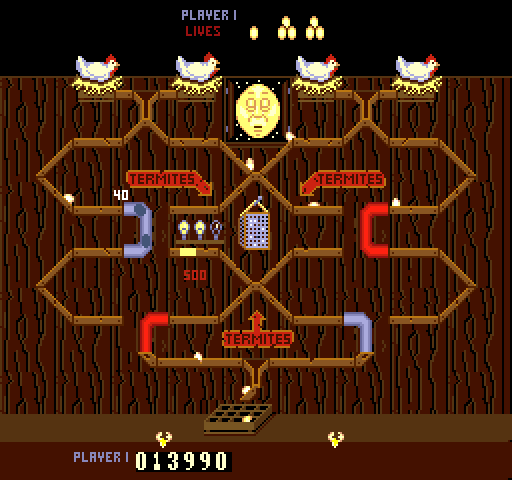 ...Which is another iteration of the chute stage, and so Chicken Shift goes on forever and ever. Chute stage, walking egg stage, catapult stage, repeat, with the difficulty increasing as time goes on. I played Chicken Shift for a good long while – there’s a decent chance I played it longer than anyone else has since 1984, in fact – and I never felt like I was getting close to an ending. Maybe there is an ending, but I’m certainly never going to see it, because it doesn’t take long for Chicken Shift to reach a level of overwhelming intensity that my tired old brain simply could not handle. Courses get more complicated and, more punishingly, everything starts moving faster until you reach stage ten or so and the chicks are running around like they’ve been raised solely on a diet of Red Bull and amphetamines.
In this regard, Chicken Shift does a clever job of balancing its early difficulty level: the first iteration of each stage type is slow and simple enough to give you plenty of time to figure out how things work, the next set give you an idea of what you’ve let yourself in for and after that you’re battered to death by a quarter-munching avalanche of poultry and moving platforms. 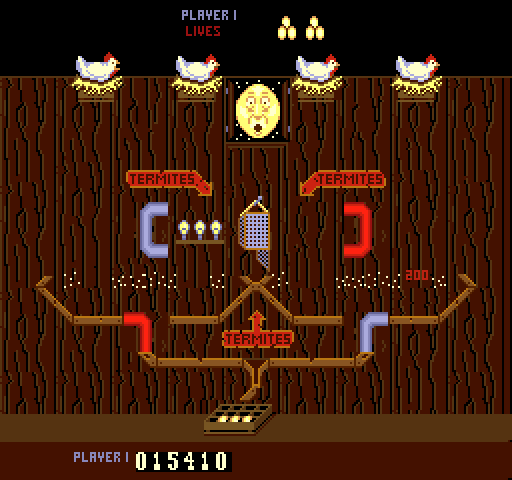 Is there anything else to say about Chicken Shift? Not much, but a little. Here’s something: when you fail one of the chute stages, a cage of termites opens in the middle of the screen and they devour all the wooden platforms. Okay, I know “videogames aren’t like real life” can be a hackneyed way to write about videogames but I’ve never let that bother me, so what the hell? Why do you have a bunch of termites there in the first place? In case animal welfare show up on a surprise raid and you need to convince them you haven’t built an elaborate chicken torture machine but rather a paradisical fun-palace for termites? But wait, it gets better – of all the ways to store termites you went with a cage? Astonishing, truly astonishing. 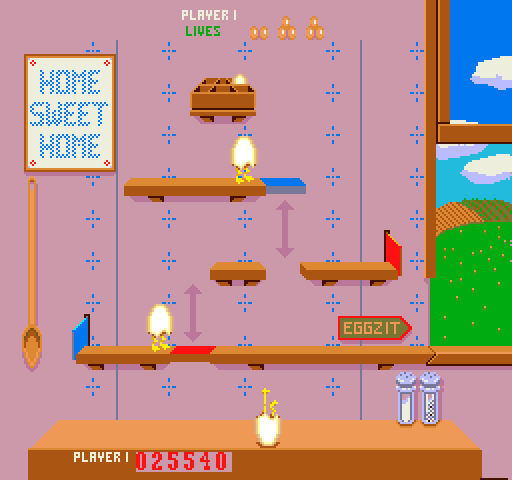 Sadly the other stages don’t feature anything quite as mind-boggling as termite cages, and neither do they get much more complex in layout or mechanics. They just get faster and faster, forcing me to confront the grim reality of my rapidly-approaching old age. I just don’t have the synapses to keep up with this kind of thing these days. I’ll just keep getting slower and slower until I have to start playing Guitar Hero on medium difficulty and once you reach that point you may as well give up everything. 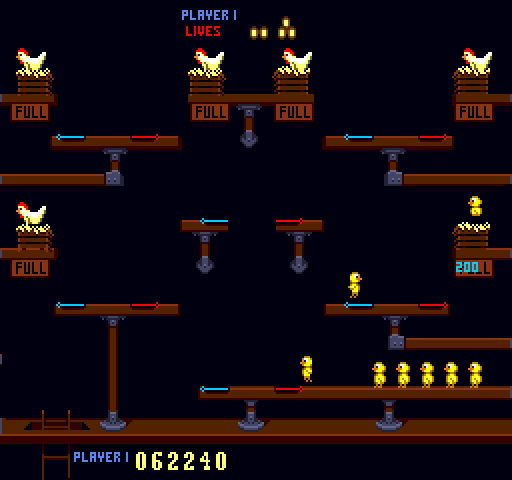 Here’s something about Chicken Shift: I have no idea what genre it’s in. My first thought was “puzzle game” but it’s not, is it? There’s no puzzle here, it’s always very obvious what you’re supposed to be doing. There’s nothing to figure out. It’s a “reaction game,” then? Not that everything has to be placed in a genre, of course, but it does feel a little strange that I can’t classify this. Unless “Game and Watch” is a genre, because that’s what Chicken Shift is – a Game and Watch game with fancier graphics, more chickens and terrible termite storage options. 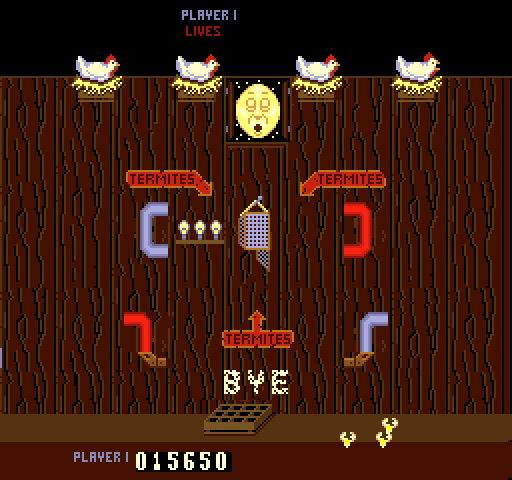 Somehow I’ve managed to write almost two thousand words about Chicken Shift, but it it any good? Erm, no, not really. It's not bad, but I can’t remember the last time I played a game I lost interest in so quickly, that’s for sure. Once you’ve played each of the stage types, there’s not much to keep you playing. This is a personal issue, admittedly, but it’s also just too hectic for me, and the stress of juggling my eggs is not sufficiently offset by the fun of doing so. If you’re a fan of this kind of mental balancing act you might get some enjoyment out of it, but as for me I’m off to play something less stressful. Doom on Nightmare, maybe. At least I know what I’m getting into with that.


Recently on VGJUNK:
The opposite of an excellent party time with Wayne's World!

Typing and scraped knees in Cave of the Word Wizard!
Perfume-sniffing werewolf combat in Bloody Paws!