I had so much fun writing about Amiga title screens featuring large, shirtless men that I thought I’d give it a seasonally-appropriate twist with another batch of Amiga game title screen! These ones are just spooky, I mean. They’re not spooky and featuring large, shirtless men. That would be a niche to far, I suspect. Not many games have given their heroes the body of a Greek god and the head of Jack Skellington, more’s the pity. So, here are a bunch of Halloween-tastic Amiga title screens. Please, try your best to stifle your terrified screaming! 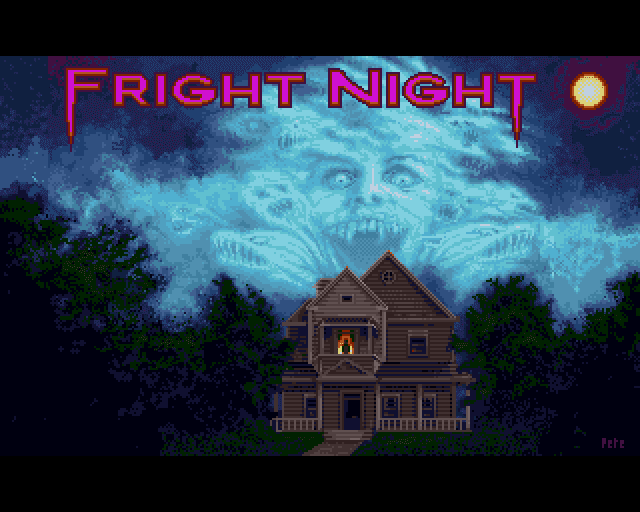 I think I’ll start with the best of the bunch for a change, and the title screen for Fright Night is most certainly that. Sure, it’s nothing more than a fairly direct copy of the movie’s poster, but it’s been so expertly converted into pixel art that I don’t even care. I want to see huge fanged vampire heads and devil-dogs formed from clouds appearing in every medium imaginable, thank you very much. Build ‘em out of lollipop sticks, use a giant laser to etch the image into the moon’s surface, create a giant mosaic in a field somewhere using thousands of DVD copies of the Fright Night remake. Some people have even had it tattooed onto their bodies, and the only reason I haven’t is because I’m already covered in scenes from Re-Animator. 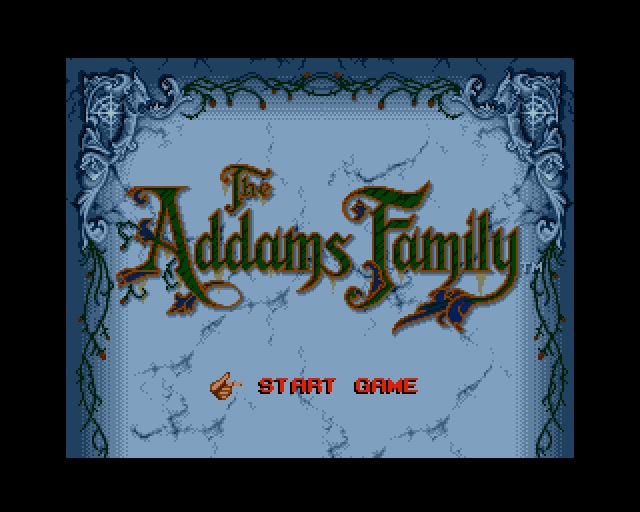 Another nice title screen, this time with a pleasing simplicity to it, is this one from The Addams Family. The meticulous placement of each pixel and the crispness of the overall effect is the kind of thing that still makes people love pixel art in these modern times of VR in the home and ten-gig day one patches. For instance, check out that marbling effect on the background. It’s super simple, but totally convincing. I appreciate that the artist went for such a restrained look, too – they could have drawn all the characters on there, but all you need to do is read the words “The Addams Family” and the theme song immediately barges into your head. Bam, scene set, job done. 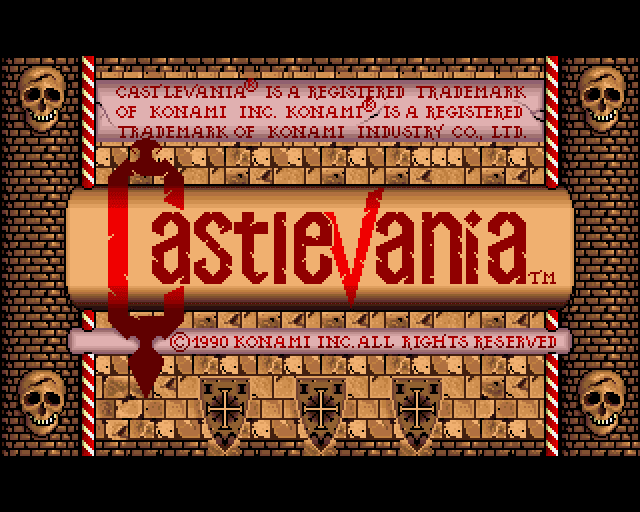 Yes, there was an Amiga version of Castlevania. No, it’s not very good. I haven’t played it in a while, but I recalled the controls being particularly unpleasant. On top of that, a big part of the original Castlevania’s charm come from its presentation, and all that is changed for the Amiga version, replaced by ugly, pillowy sprites and slowed-down renditions of the classic soundtrack. Just to prove my point, here’s what Dracula’s final form looks like in the Amiga version: 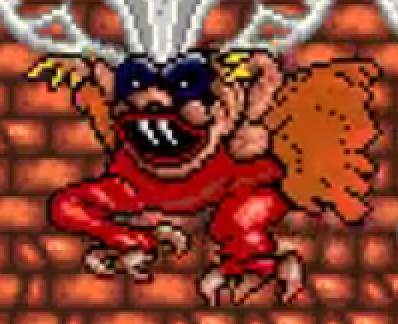 I honestly have no idea how to describe this thing. It’s got diarrhoea spraying out of its armpits? It’s wearing shades? These are merely hypotheses which can never be proven as fact, partly because humans are not capable at looking at this hideous thing for long enough to unravel its mysteries.
So, the title screen of the Amiga Castlevania does a good job of capturing the half-arsed, bootleggy nature of the entire endeavour. The actual Castlevania logo itself looks quite close to what you’d see on a “proper” Castlevania game, but it all rather falls apart after that. The skulls look slightly embarrassed to be a part of it, as well they might, and quite what barber’s poles have to do with anything is beyond me. I think the worst thing about it is that it’s so resolutely, inescapably beige. I know that looks like brickwork, but it’s actually hundreds of soft furnishings, stolen from elderly grandmothers across the land and compressed together. 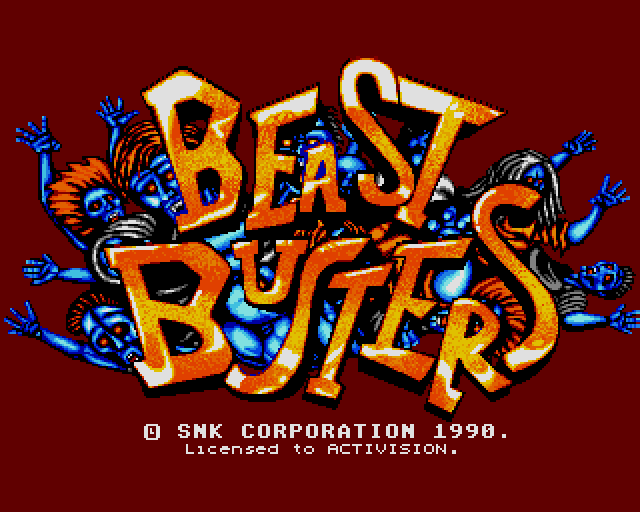 If there’s something unusual in your local community, who should you call? Beast Busters! Yes, SNK’s gore-drenched lightgun shooter received an Amiga port, complete with title screen that looks as though someone dropped the logo onto a crowd of zombies without their prior knowledge. Every time I look at it, I think for moment that all the zombies are throwing up the metal horns, especially that one on the right with the long hair. 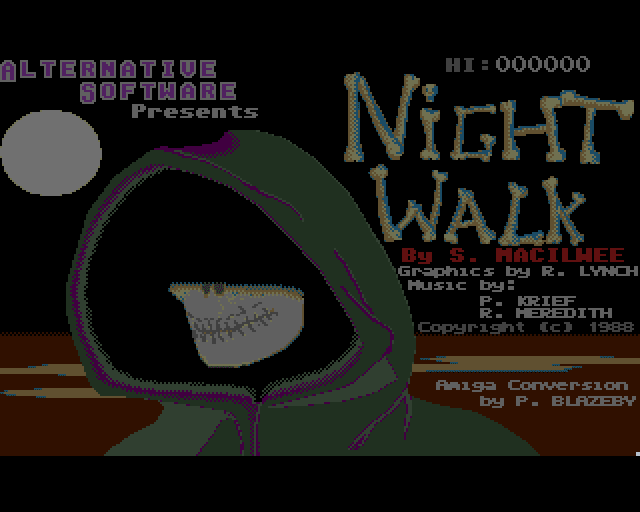 This should be Night Jog, surely? That Grim Reaper’s got his hoodie on, he’s clearly pounding the pavement in training for something. Maybe he’s getting read to enter a die-athlon. Hey, it’s October, I’m allowed to make jokes like that. He’d probably do well in a long-distance running event, you know. After all, no-one can outrun Death. 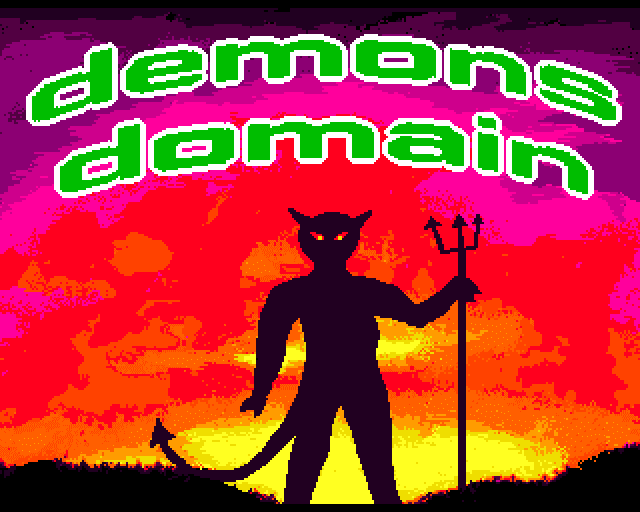 Say what you like about the Demons Domain, but it has some beautiful sunsets. Less attractive is the demon himself, an awkward and lumpy individual who’s standing as though he’s got some niggling lower back pain. Then there’s his pitchfork. No sinner is going to be scared of a prodding from that thing, it looks like it’s made from drinking straws and chunks of Toblerone. 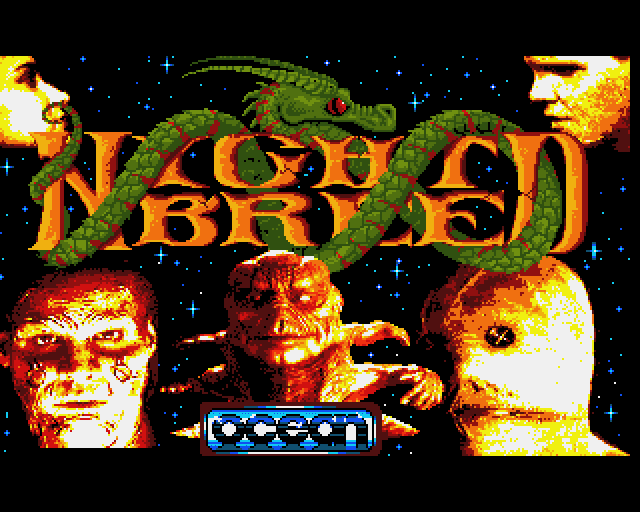 I’m sure the artist intended that players see the two people in the upper corners of the screen as staring at each other, but all I can see is the man and the dragon locked in a lover’s stare. That’s why the dragon has placed its tail over the woman’s face, he’s trying to make it look like she’s got a moustache.
So, Night Breed the game (there were two Night Breed Amiga games, as it happens) is based on Night Breed the movie, which means this title screen offers a rare digitised appearance by director David Cronenberg. He’s the character in the bottom-right. He’s a serial killer in a home-made mask, even if this particular rendition has given him the appearance of a particularly menacing chocolate brioche. 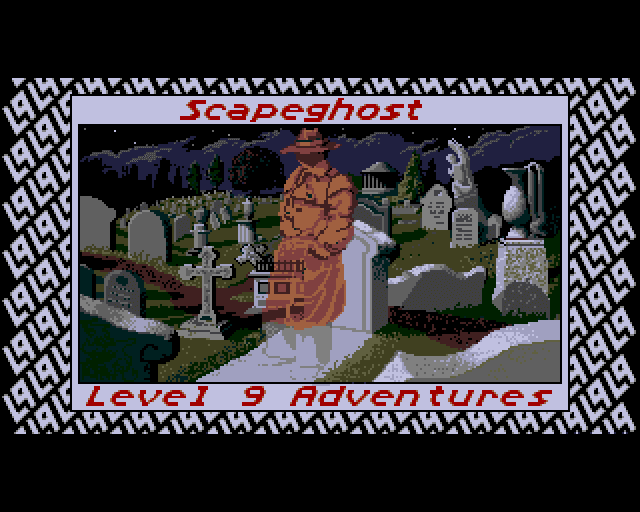 Wow, and I thought my Halloween puns were bad. Still, that’s a nice-looking graveyard, even if it is haunted by a ghost detective. He’s risen from the grave so he can hunt down awkward teenagers who think wearing a fedora and a trenchcoat makes them look cool and classy and scare them straight. I know the kids will probably grow out of it themselves eventually, but if Humphrey Boo-gart here can save them a few years of mockery and scorn then he’s providing a valuable service. 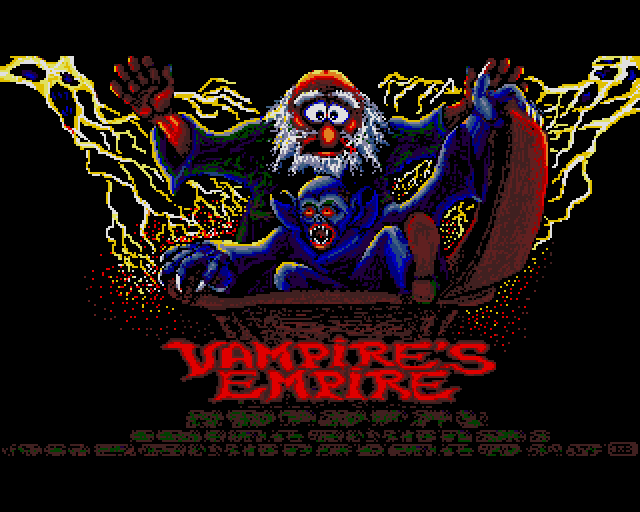 The vampire’s empire extends to a small coffin and a terrified old man, so he’s hardly Genghis Khan. Typical vampire, always over-exaggerating his profile and dark deeds. Oh, look at me, I’m the Prince of Darkness, mortal men cower in my wake and mortal women are unable to resist my magnetic charms. Not this vampire, he’s the duke of a cool, dry larder cupboard at best and mortal men and women alike are more likely to be paralysed with laughter at his appearance than transfixed with terror. Of course, it’s unfair to judge the vampire based on this picture. No-one looks their best when they’ve just got out of bed. 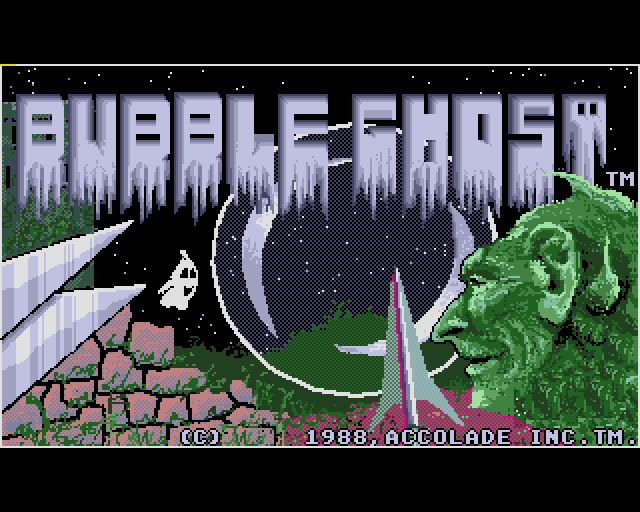 A much greater focus on the bubble as opposed to the ghost side of this equation, huh? The reason for this, one assumes, is that the ghost looks like a spectral condom. Best not to highlight that, I think. The bubble’s two deadliest foes – goblins and spikes – are also heavily featured. I think that’s a goblin, anyway. It could just as easily be rubber Ronald Reagan mask, freshly pulled from an algae-choked pond. 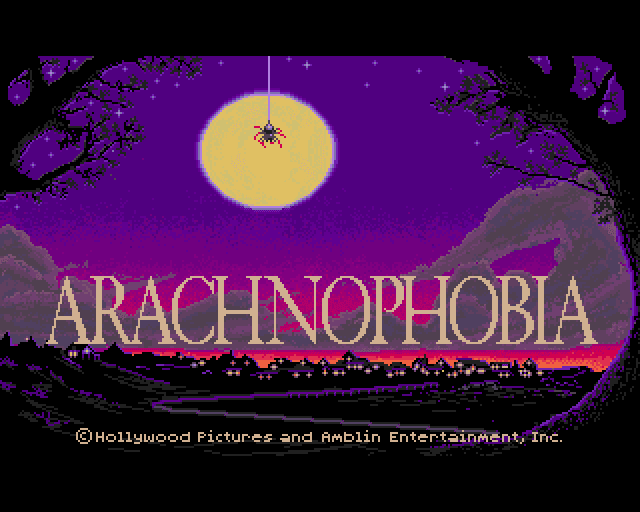 Another beautiful title screen from another movie tie-in (so at least they’re good for something) with Arachnophobia, the 1990 movie about East Germans adjusting to life after the fall of the Berlin Wall. Not really, it’s about killer spiders. The game also afford the player the rare – if not unique – ability – to play as John Goodman, so it should be treasured for that reason even if you don’t like the title screen. I do like it, though. I like it a lot: the purple sky, the trees framing the screen. That dangling spider is my equivalent of the kitten on the “Hang in there, baby!” poster. 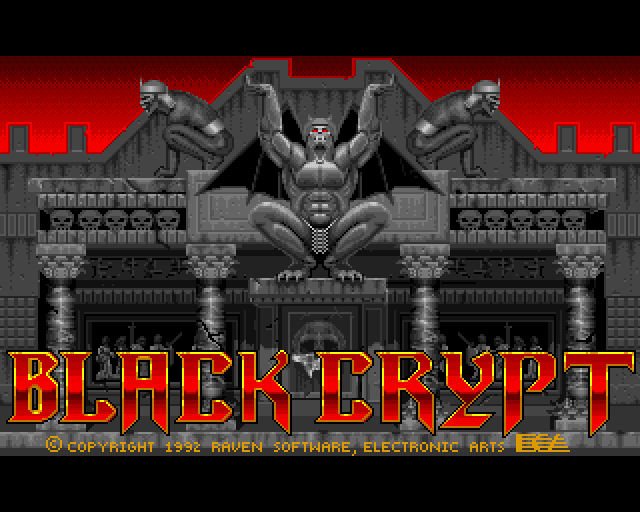 “We dedicate this profane temple to Qu’a Dricepes, God of Squats!”
Also, don’t lie to me, Raven Software. That is obviously a grey crypt. 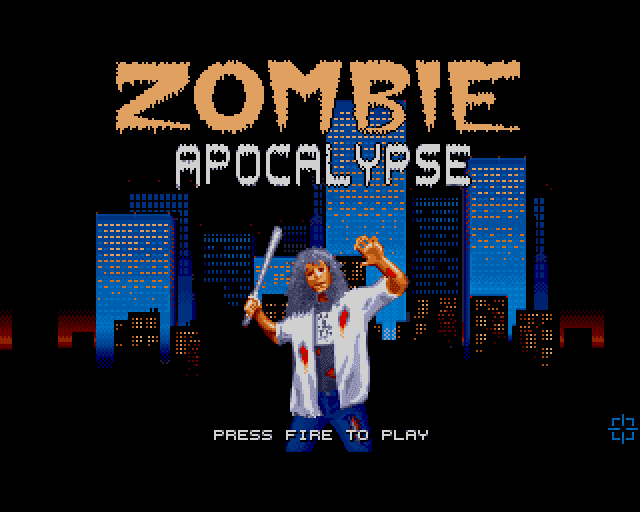 Oh no! Rock legend and saviour of the badgers Brian May has become a zombie! I wonder how that happened? A kind of magic, probably. I say he’s a zombie, but now I’m not so sure. Zombies don’t tend to carry weapons, so maybe he’s a survivor who’s been mistaken for a zombie and riddled with bullets in homage to Night of the Living Dead.
By the way, if that city background looks familiar to you that’s because it was obviously inspired by (if not outright stolen from) the intro to Streets of Rage. Man, I really want a new Streets of Rage game. You could have them punching zombies if you really want, Sega. Whatever it takes to get Grand Uppah back into the public consciousness. 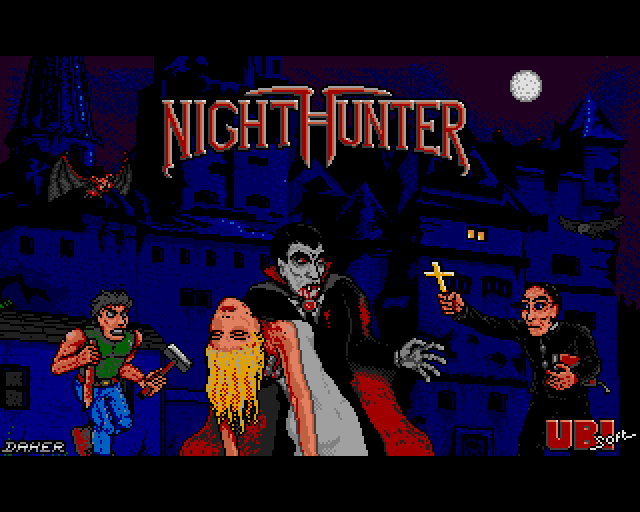 Blimey, it’s a hard life being a vampire, isn’t it? Beset on all sides by angry priests and eighties action movies heroes carrying stakes, a simple nosferatu just can’t catch a break. This is why most vampires take their victims back to their lair before feasting on their life-force. Don’t just stand there nibbling necks in the town square, you dope. I can only assume this vampire didn’t know the rules, grabbed a virgin and went to town, only to look up half-way through his meal and say “what? What’s the matter?” as the villagers looked on in horror. 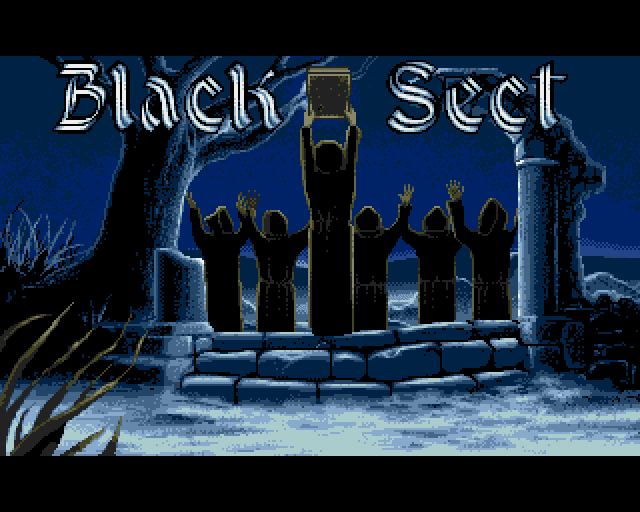 “Behold, my brothers! The sacred floor tile of Ba’al! With this, we can finally complete our mission to remodel the kitchen!” 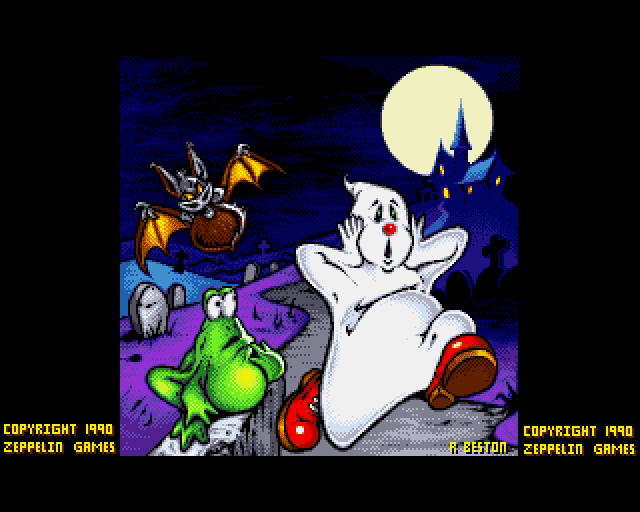 I’m not going to lie, the first time I looked at this I though that frog had a massive rack. Judge me if you want, but I’ve been surfing the information superhighway for twenty years so the idea of someone drawing a frog with a massive rack is not something that would surprise me.
What is surprising is that Binky the ghost seems to be terrified, despite being a ghost. What do you have to be scared of, Binky? Besides Egon Spengler, I mean. That which is dead cannot die, and I doubt they have to pay taxes either, so calm down and get back to school. 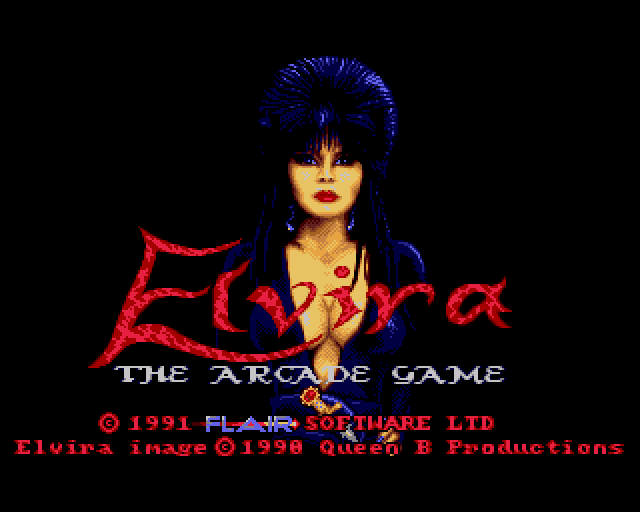 There’s not much to this one besides a picture of everybody’s favourite spook-themed innuendo dispenser Elvira, Mistress of the Dark, but frankly that’s more than enough for me. I’d say it’s not the greatest facial likeness, but Elvira has a few, ahem, attributes that are so immediately recognisable that it isn’t a problem. Her hairdo, I mean. It was an interesting stylistic choice to write Elvira’s name in strips of salami, but I’m sure the artist had their reasons. Their office was above a deli, for instance.


Horror Zombies From the Crypt 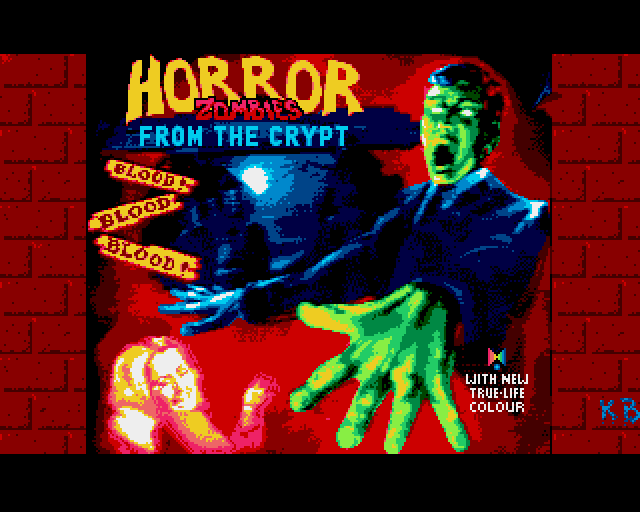 A striking title screen for this game, with a lovely, colourful homage to B-movie posters that sadly doesn’t carry over into the game itself. I’d happily play a game that looks like this, you know? Anything with the tagline “Blood! Blood! Blood!” is liable to pique my interest, unless it’s on an ad for a butcher’s shop. I don't even like black pudding. 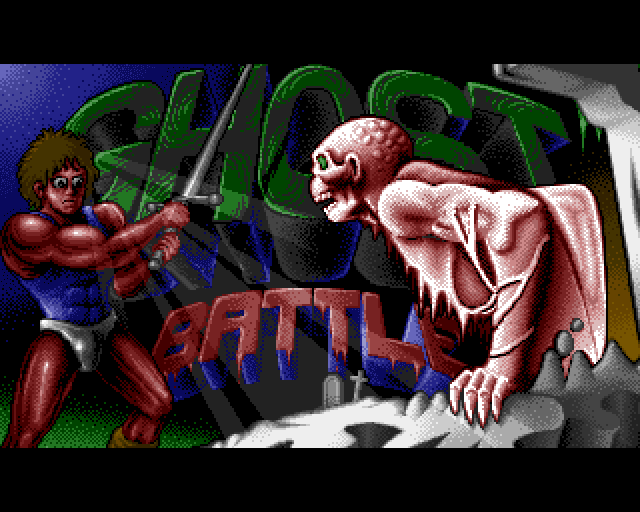 Last but my no means least – certainly not least bananas, anyway – is Ghost Battle, and what a captivating tapestry it weaves. The hero of this game is a truly astonishing sight, with his metal y-fronts and vacuum-packed abs. Someone’s replaced his eyes with googly eyes, and he’s using those googly eyes to stare at this zombie so hard that rays of pure, righteous fury are emanating from his face. You’d think they’d include a ghost on the title screen of a game called Ghost Battle but no, it’s got a zombie. Possibly a giant zombie, if those tombstones in the middle are any indicator of scale. A colossal man in the most uncomfortable underpants, doing battle with an equally huge zombie. How magical!


Recently on VGJUNK:
An exciting return with Halloween Trick or Treat 2!
The kooky creatures of Symphony of the Night's monster bestiary!
Halloween Spooktacular 2016 begins with GBC Castlevania knock-off Emo Dao!
Posted by VGJUNK