It is with great... hang on, what’s the opposite of excitement? Indifference? Okay, it is with great indifference that I present for your reading pleasure an article about Gravity-I’s 2007 Game Boy Advance version of Deal or No Deal! Wait, where are you going? 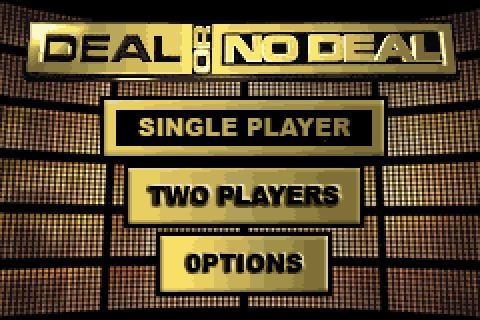 Oh, you decided to stick around, did you? Because I wouldn’t have blamed you if you’d left. Well, here you are and yes, it’s a Game Boy Advance recreation of the world’s premier television show about opening boxes and anonymous phone calls. There’s a two player mode! Imagine the incredible odds you’ve have to overcome to find another person with a Game Boy Advance and a copy of Deal or No Deal, never mind a person who met those criteria and was willing to play Deal or No Deal. You’ve got more chance of finding Lord Lucan in your underwear drawer. 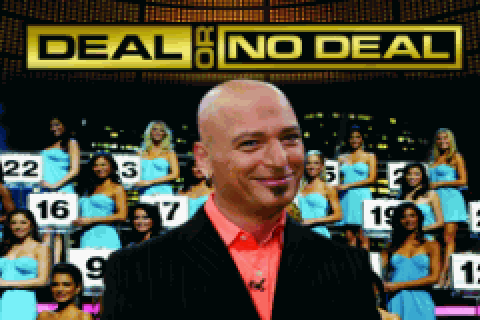 Here’s the game’s title screen, but who the hell is this man? He looks like a nightclub hypnotist with a string of restraining orders and unpaid bar tabs. The villain from a bootleg James Bond movie with a title like Target: Silverfire. A man whose YouTube channel is a fifty/fifty split between the clear intellectual superiority of atheism and pick-up artist techniques. A harsh assessment, maybe, and unfair accusations to level at someone I’ve never met, but I’d avoid him if he tried to talk to me in a bar.
Okay, so I looked it up and his name is Howie Mandel and he hosts the US version of Deal or No Deal. He seems like a decent enough bloke. He’s got an extreme irrational fear of germs, apparently to the extent that he built another house next to his house that he can live in when one of his family is sick. It’s a bloody good job for him that he’s a wealthy celebrity then, isn’t it? Otherwise he’d have to build some kind of decontamination tent out of Tesco carrier bags and packing twine. The reason I didn’t recognise Howie Mandel is that the UK version of Deal or No Deal is presented by bearded nutjob Noel Edmonds, a cosmic-ordering peddler of “magnets that cure cancer” pseudoscience bullshit and the man responsible for inflicting Mr. Blobby on an unsuspecting world. I would take Mandel over Edmonds any day of the week. 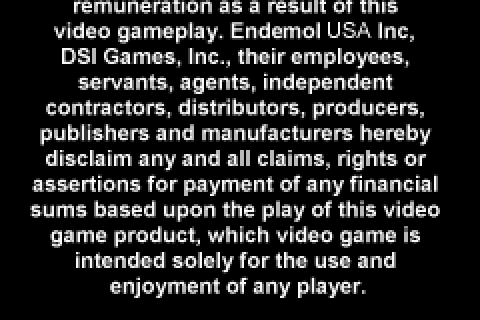 The first thing you see when you start the game is this lengthy (and unskippable) text crawl which reminds the player that, amongst other things, they’re playing a game and that no real money is involved. Well, that’s one award Deal or No Deal has in the bag: Most Patronising Videogame. It does make you wonder whether the developers have had trouble with this situation before, though. Maybe they knocked out a Who Wants to be a Millionaire game and people kept turning up at their offices with photocopies of their GBA screens and demands for a massive cheque. 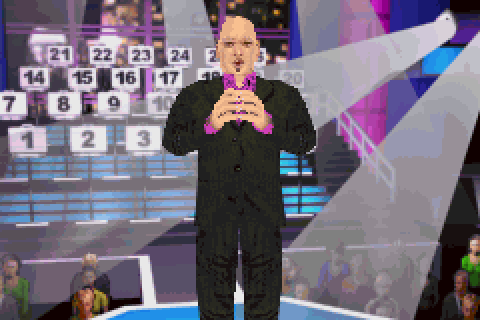 You know when I said Howie Mandel looks like a Bond villain? Yeah. A villain who wants revenge on 007 for supergluing his fingers together. “No, Mr. Bond, I expect you to fetch me a bottle of nail polish remover.” 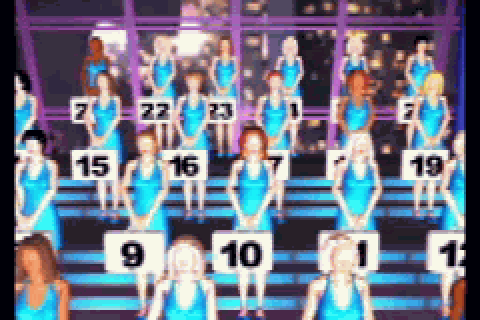 Howie then unleashes his rather unnerving army of faceless mannequins, each of them carrying a numbered case. He refers to them as his “26 better halves,” which by my calculations means there are thirteen and a half Howie Mandels out there. That seems like too many Mandels for one planet to sustain. 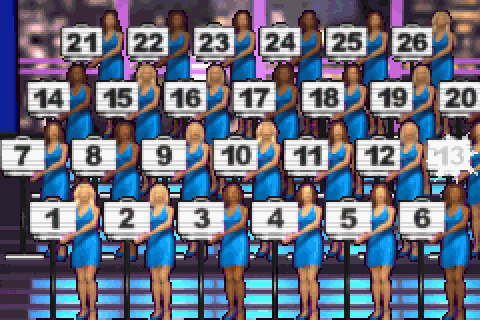 Now I have to pick a case. I went for number thirteen in defiance of superstition, and because I felt sorry for lady number thirteen because she doesn’t quite fit on the screen. Deal or No Deal is a good illustration of the differences between the cultures of the USA and Britain: the US version has shiny metal cases presented by a group of glamorous women, where as in the British Deal or No Deal the boxes are plain red cubes controlled by bog-standard members of the public. We are but a simple island nation, after all. 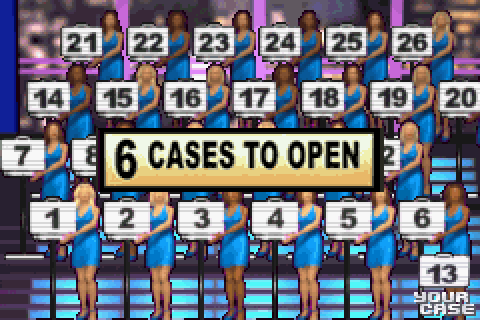 So, how does Deal or No Deal work, then? Essentially, it’s a guessing game. Each case contains a cash value, and your goal is to leave with as much money as possible. What happens is that you pick some cases to open, and the cash values contained within are eliminated from the game. After a while, the mysterious banker will call you on a special telephone and make you an offer, based on the values still in play. So, you want to eliminate the lowest values first, pushing up the average of the remaining values so that the banker offers you a more lucrative deal. Or you can just open all the cases and stick with what’s in the case you chose if you’re feeling especially brave. Showing the lack of imagination that’s plagued me for my entire life, I elected to start with case number one. 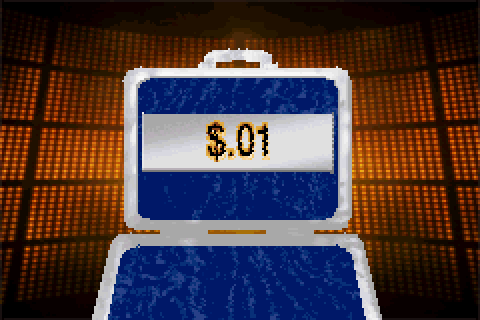 Well, that couldn’t have gone much better, could it? The lowest possible value, eliminated with my first pick. The banker must be bricking it. 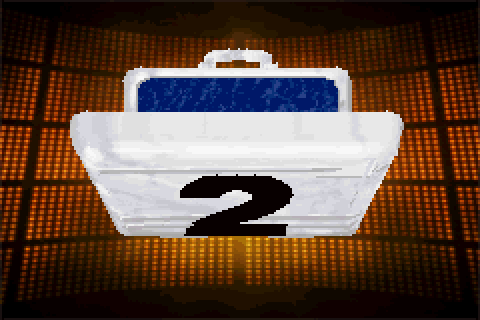 And so on it goes, with the player picking six boxes to open in the first round and enjoying – sorry, enduring – the case-opening animation every time. I’m going to go out on a limb and say that the person responsible for this game’s graphics did not work as hard as perhaps they might have. I mean, it’s a videogame, you’re freed from the restrictions of television and limited only by your imagination! Instead of a case, you could have placed the number inside the abdomen of a giant space lizard and had an astro-barbarian hack his way to the number with his laser-axe. Okay, that’s just a first draft, but you get the idea. If I’d wanted to see this many cases being opened I’d have applied for a job at airport security. 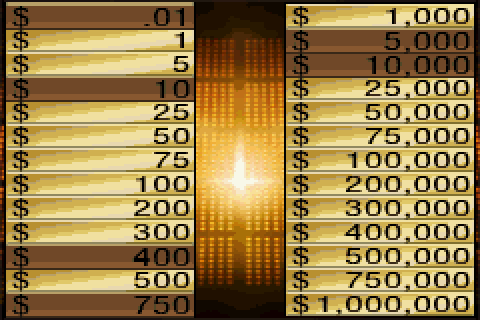 The first round is over, and it went rather well. All the biggest numbers are still in play, so I’m in line for a good result. Time to hear the banker’s offer, then. 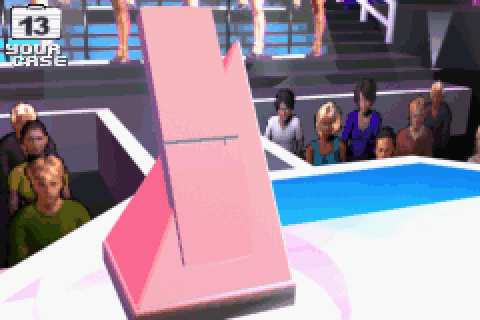 That’s one heck of a telephone, arriving in 2007 after a time-portal opened up during the filming of a Duran Duran video. I would unashamedly have that telephone in my house. 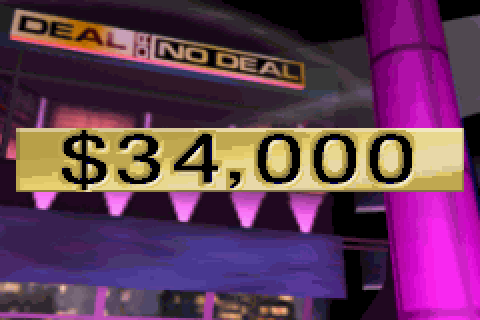 The banker’s offer was a derisory $34,000. What’s worse, the game actually does that bloody “pause for dramatic effect” thing that TV shows do in these situations. Well screw you, Deal or No Deal, because I’m playing this on an emulator with a fast-forward feature, so I win this round. As much as anyone who’s playing a GBA version of Deal or No Deal can be considered a winner, anyway. 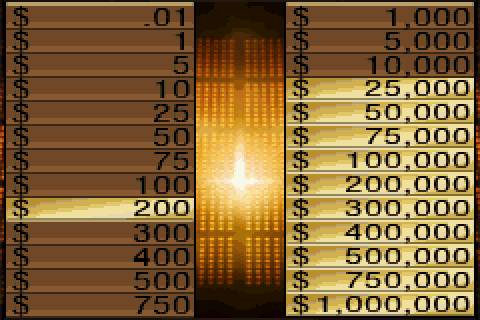 Obviously I didn’t take the deal, so that means another few cases to open before the banker makes a new offer, the cycle repeating until my incredible box-choosing skills meant I’d played just about the perfect game of Deal or No Deal. Trust me, I’ve got my legal team going through that disclaimer at the start with a fine-toothed comb, searching for a way that I can leverage my talent for guessing into cold, hard cash. 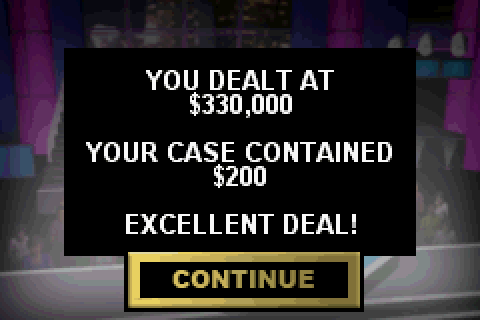 In the end, I made a deal for $330,000. Turns out my box only contained two hundred bucks. How thrilling.
That’s about it for the main “Deal or No Deal” game mode. My conclusions? It’s about as accurate a videogame version of the game show as you could hope for. It plays Deal or No Deal. If you want to play Deal or No Deal for non-fabuolous imaginary cash prizes while sitting on the toilet then this is a perfectly acceptable way to capture that experience – although I’m sure there must be a mobile phone version, that’d probably be easier these days. At least you’d be able to see the screen properly, something certainly not guaranteed when using a GBA.
As for the non-gameplay stuff, it’s a mixed bag. One impressive feature is that there’s a lot of digitised speech from Howie Mandel crammed into the cartridge, and it’s very crisp and easy to hear. You could argue it’s easy to get that much speech in there when the game itself must surely take up next to no space, but still. As for the graphics… well, you’ve seen them. They’re pretty horrendous, grainier than a year’s subscription to Wheat Farmers Weekly magazine and lacking any kind of flair. Particularly challenging on the eye is Mandel’s 3D model, especially in motion.

There is something genuinely unnerving about the way his facial features slide around on his egg-like head, as though his expressions are formed by a highly-coordinated colony of amoebas that are always on the move. 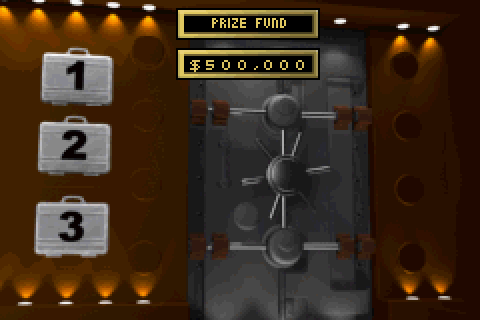 The fun doesn’t stop there, though! There are two other game modes included, in the incredibly unlikely event that you somehow become bored with the main game. The first is the Vault Game, the goal of which is to crack the combination to said vault. You pick three numbers – represented, of course, by the cases from the main game – and you’re then told whether each number was higher or lower than the correct combination. You use this information to make another, more informed guess, until you arrive at the correct code to open the vault. The amount of money you win (and, just to make this perfectly clear, this is not real money and the developers will not give you any real money) decreases with each unsuccessful guess. Is it any fun? As a tiny lockpicking minigame in a different, better game it would be okay, but as a standalone thing it’ll keep you interested on a timescale usually only used by scientists tracking subatomic particle interactions. 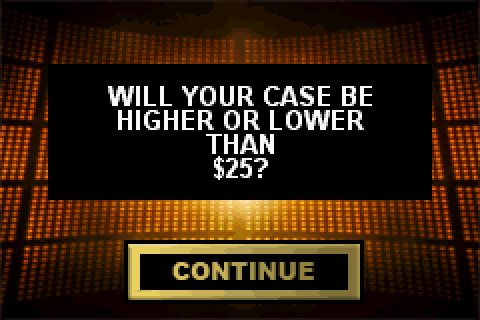 The other minigame is High or Low. Open a case, then guess whether the next case's cash value will be higher or lower than the previous number. It’s one hell of an achievement to keep making games that are each more boring than the last considered the level they started at, but Deal or No Deal is extraordinary in that regard. You don’t even get a special congratulations screen if you manage to guess correctly for every single case in High or Low, something which I managed to do on my very first attempt. I put this down to spending so long trying to scrounge up cash in God Hand via the video poker game. 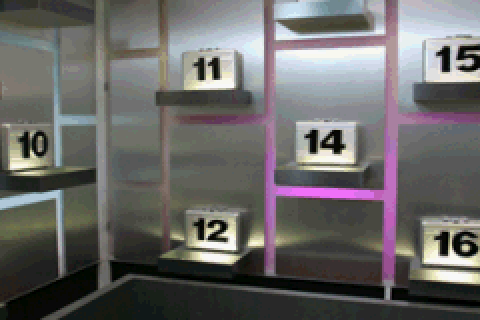 I don’t think I’ve ever written about a game with so little need for a concluding paragraph, but I’d feel weird not including one, so here it is. Deal or No Deal is a game that perfectly recreates the mechanics of the game show but without any of the tension and potential schadenfreude that comes from seeing someone gamble away the chance at winning a life-changing sum of money. If you like Deal or No Deal enough for that concept to excite you then hey, this is the game for you, although I will point out you can recreate the game yourself at home by using folded bits of paper and having someone shout a number at you every now and then. It also gets extra points for not including Noel Edmonds.


Recently on VGJUNK:
It's a bug hunt in Aliens for the C64!
Mike Haggar returns, cracks skulls in Final Fight 2!