Today: some golf. "But VGJunk," I hear you wail, "isn't golf one of the most tedious events mankind has ever allowed to be broadcast in the name of entertainment?" You may have your own, differing feelings on the subject and that's fine, but personally I'm of the opinion that Mark Twain's famous quote that "golf is a good walk spoiled" does not go far enough. It's not even a walk, you ride around in an electric dorkmobile. So, golf. I'm not a big fan. What I am a fan of is Japanese videogame artwork, and by focusing in on Famicom games I have managed to put together a selection of box-art for golf games that somehow, against all the odds, manages to make the sport look interesting. 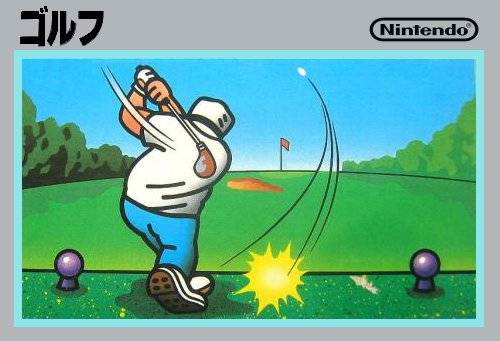 Let's begin, as seems appropriate, with Nintendo's own Golf, one of the very earliest Famicom releases. It features a man hitting a golf ball towards a flag, thus effortlessly capturing the very essence of the sport, but here's my problem with it - I know that's supposed to be a cap on his head, but I just can't get my brain to read it that way unless I really concentrate on it. At every passing glance, my eyes tell me that this is the back of a man who has a mere stump where his head ought to be, or maybe that he's popped his collar to a frankly ridiculous degree. His doctors said he couldn't play golf in a neck brace, but he was determined to prove them wrong! And then his head fell off. I have no idea why I can't see it as it's meant to be. However, I know exactly why those purple tee-marker orbs look to me as though they should have electricity arcing between them. It's because I'm a big nerd. 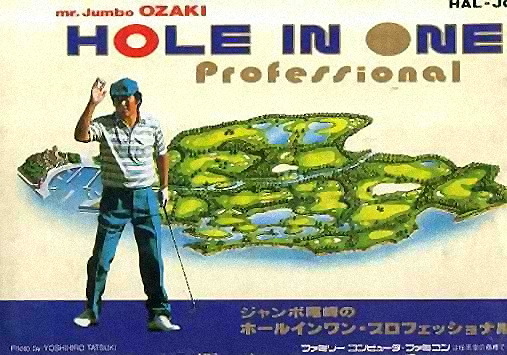 Smashing the stereotype that "Jumbo" is an epithet only suitable for elephants and the morbidly obese, famous Japanese golfer Jumbo Ozaki gained his nickname due to his height. According to Wikipedia he's 5' 11", so I'm on course to be given the nickname Gargantua any day now.
This isn't the most interesting of cover artworks, I'll grant you. There's a golf man and a golf place - you know, the Hole Zone or White Ball Alley or whatever they call it - and some golf words. It's definitely a golf game. The cover has gotten that across in a clear and effective manner. You're never going to mistake it for Doom, so congratulations to the artist on that front. I also like that they included a yacht marina on the left of the image, just in case you weren't one hundred percent certain that you're too poor to take up golf. 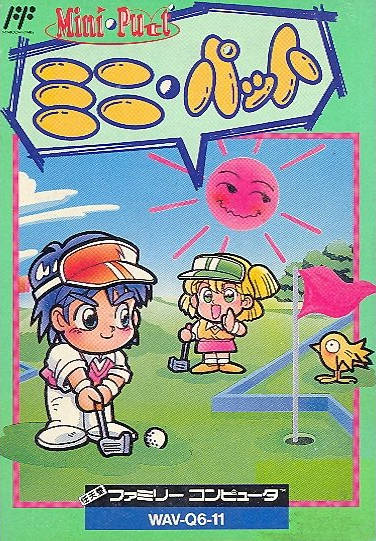 These being Japanese covers, it wasn't going to be long before we got to one featuring giant-eyed little munchkin-people with the physical dimensions of a toddler and the hair of a clown trapped head-first in a threshing machine. Here are some now! Just look at 'em, the neckless freaks. The young chap in the foreground is about to take his putt, but in a disgraceful show of poor sportsmanship that girl in the background is shouting at him. I can see it now, he's bringing back his putter, his eyes firmly on the ball and just as he starts his swing his opponent shouts "don't miss, dickhead!"
Also worthy of note is that sun, who has the florid cheeks and slack expression of a teenager who's drunk, possibly for the first time, on a cheap Bacardi knock-off, a teenager who has just decided that now is the perfect time to call Sally from his maths class and tell her he fancies her, forgetting that she has no idea who he is and that it's two AM in the morning. I know that sounds way too autobiographical a hypothesis for it to have been triggered purely by looking at that cartoon sun, but I swear that never happened to me. I would never drink a knock-off Bacardi substitute, not when there was creme de menth that would never be missed by anyone sitting in the drinks cabinet. 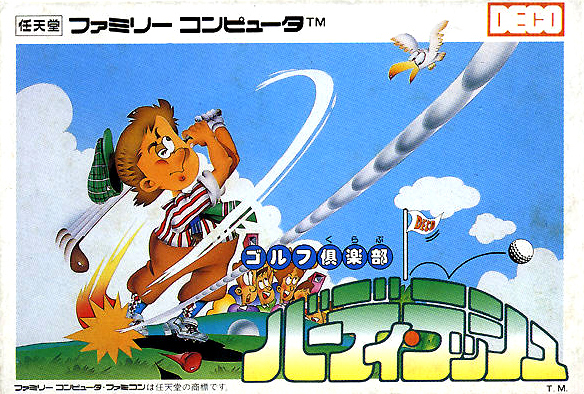 What is a "Birdie Rush," anyway? The thrill of coming in at one under par, or trying to get through your round of golf as quickly as possible because you've had a sudden epiphany that you could be spending your time in a glorious myriad of other, far superior ways? This guy certainly doesn't seem to be having much fun, but then I think he's supposed to be a professional. That's why there's a crowd behind him with camera. I need a job where I can wear an outfit like that and still call myself a "professional," but what are my options besides becoming a golfer? Eccentric grandfather in a kid's TV show, possibly. Time-travelling 1920's newspaper boy is the only other one I can think of. Dude, why is "society" and "the Man" so insistent on putting everyone in their specific little boxes, man? I want my bank manager to wear clothes like that. It's not going to affect his ability to do his job or anything, so why not? Might want to lose the spiked shoes, though. They'll mess up the flooring. Related trivia: Nintendo put out some officially-branded Super Mario World golf shoes. Well, if he is going to spend all that time jumping on evil creatures he might as well have jagged metal sticking out of his soles while he's doing it. 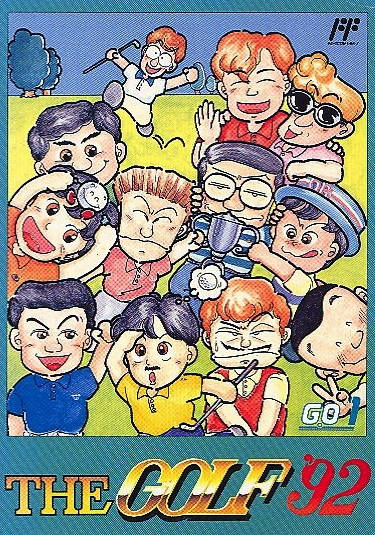 This isn't just any golf, this is THE golf, the definitive article, the One True Golf. A bold claim indeed. I can't tell you whether this game is good enough to crown itself The Only Golf, because I'm not going to waste my time playing it. Let's just say it is. The Golf '92 never can and never will be bettered as a videogame recreation of golf. I can tell you one thing about this cover art, though, and that's that putting pencil moustaches on cutesy, super-deformed characters makes them look really creepy. For example, the guy in the yellow shirt at the bottom; he looks like a mean dad who threw away his daughter's Cabbage Patch doll and was then cursed to turn into that very doll, and he's just getting one final round of golf in before his hands become useless fuzzy flippers. 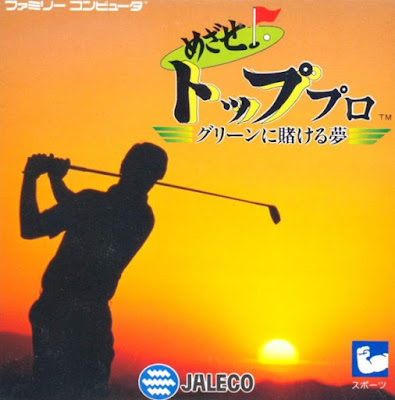 I think that title translates as something like Aim! Top Pro Dreams of the Green, which is a damn sight more interesting than Golf or even The Golf. The cover's nice, too, very tranquil, although obviously it's too dark to play golf at sunset so this has probably been arranged so the player and his caddy can have a romantic moment to help them get over the double bogey on the fifth. So, a good cover, but the game's by Jaleco so it will almost certainly be aggressively average. An aggressively average Famicom golf game from 1993. I think that might be the most average videogame possible. 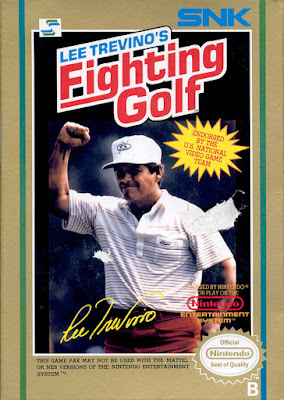 There's Lee now. Presumably. I have no idea what Lee Trevino looks like. The only reason I am aware of his existence is this game, and all I know about this game is that it adds an extra little layer to the Simpsons joke about Lee Carvalho's Putting Challenge. I'm sure it's a great game, though. It's endorsed by the US National Video Game Team, after all, and such an august institution would never allow their name to appear on an inferior product. 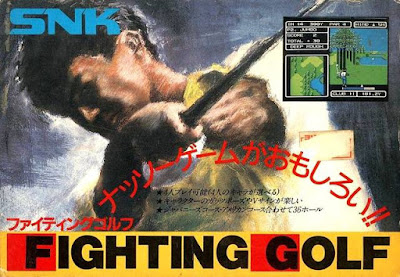 In Japan it's just called Fighting Golf - no word on whether the Japanese National Video Game Team endorses it - and it has a much more dramatic cover, with dynamic brushstrokes that capture a raw power that Lee Trevino simply does not possess. The intensity of the image is somewhat undercut by the golfer not looking at where his ball is going, mind you. 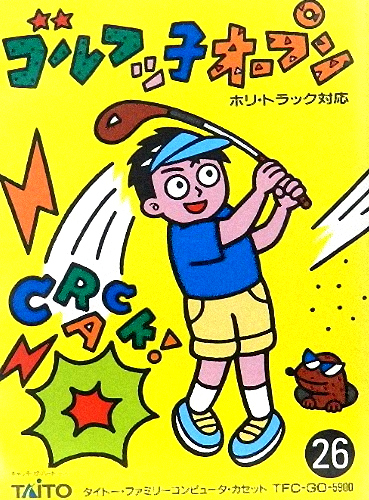 Another fun, cartoony cover for Golf-kko Open, the undoubted star of which is that cool mole. You can tell he's cool because he's wearing shades, and sunglasses do seem like a good idea to protect oneself from the brightness of this artwork, which strikes me as a bit Keith Haring-ish. 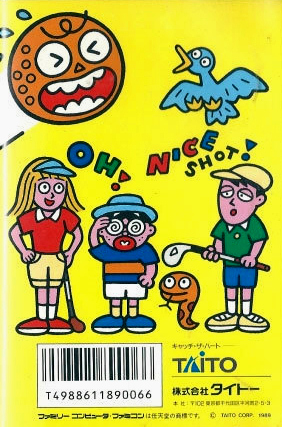 The picture continues on the back of the case, where we can see that the golf ball is caught between ecstasy and agony. The sting of the driver hurts, but it hurts good. Forget about the masochistic golf ball for a moment - possibly a futile challenge, it's not a concept that is easy to forget - and instead check out that snake. That snake has the glazed, anxious expression of a reptile that has, through a series of comical mishaps and coincidences, become a participant in a human golf tournament. No-one has noticed that he's a snake yet, and he's going to front it out. Will there be a heart-warming ending when the snake managed to win the golf tournament and everyone still loves him even though he's a snake? No, of course not. How is he going to hold a putter? 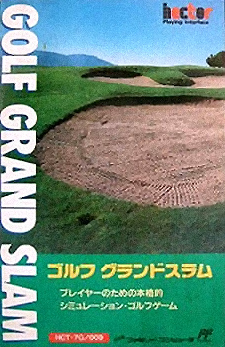 It's a bunker. Yep. The ol' sand hole. Disappointment Beach. The Dunes of Shame. I don't have much more to offer than that, folks. Next! 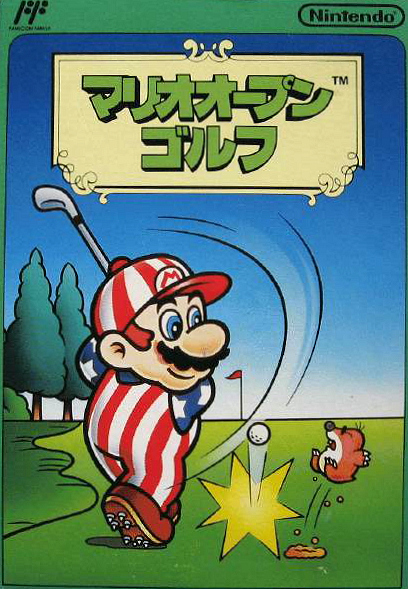 It's-a him, Super Mario, with a smile on his face as he uses a golf club to batter a mole to death. It's Super Mario Bros.: Groundsman With Extreme Prejudice! Now you're playing with power, and a niggling sense that you're a terrible person.
At least this cover finally settles the matter of Mario's nationality. He is definitely American. No native of any other nation would wear that outfit. Technically, Mario is breaking Federal law by wearing these hideous dungarees, as the US Flag Code states that the Stars and Stripes "should never be used as wearing apparel." That's animal murder and a criminal lack of patriotism in one cover, Mario. What a disgrace. 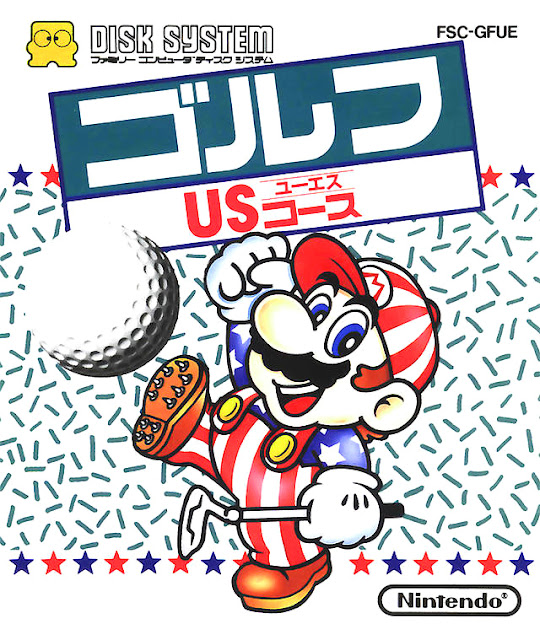 And now he's goose-stepping! Do you hate America, Mario? Is that it? 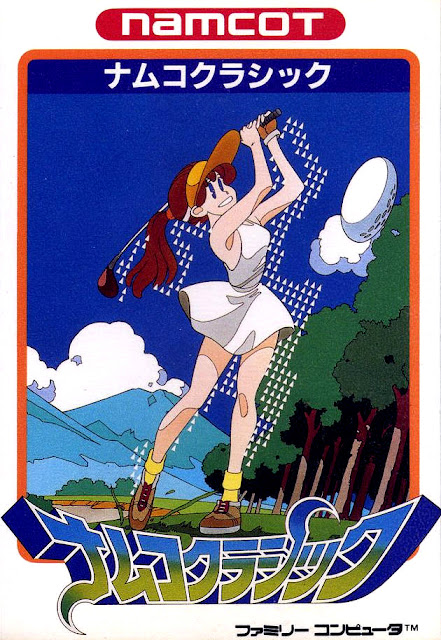 This one is my favourite of the lot, a light, summery number that actually looks more like the cover of a tennis game than a golf game. I really like the logo, and the artwork is so cheerful that it manages to make golf look like something worth spending your time doing, but it's offset by the unusual swarm of arrows hovering around the girl, which gives you something to ponder. What do they represent? Are they extremely dense motion lines? Are they pointing in the direction of the ball's travel? Is this a giant woman being attacked by a fleet of the ships from Asteroids? Who knows, but it's an interesting touch none-the-less. 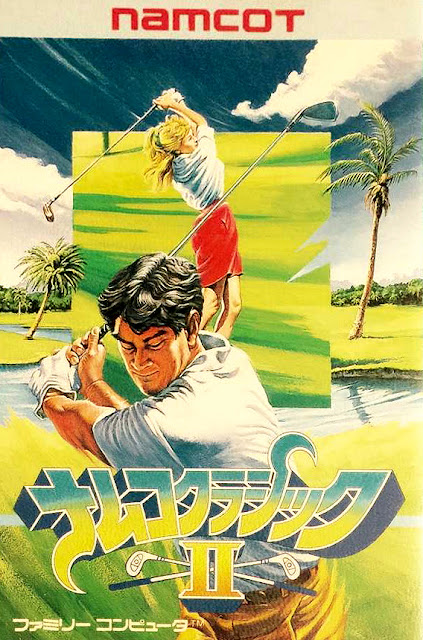 For the sequel, Namco took a more realistic approach. They've still got a lady taking a swing on there, but now there's also a man who seems to be preparing to smash the game's logo with his five-iron. I'm beginning to think that I have some barely-suppressed rage issues, because I'm looking at a lot of these covers and immediately seeing violence. Maybe it's just my own dislike for golf coming through, although it's not like I don't enjoy golf games. Through the transformative power of videogames, almost anything can be made enjoyable. Golf, stacking blocks, typing, you name it. I could probably get some fun out of my own colonoscopy if they let me control the camera and turned it into a little game. "Pilot the all-seeing Eye of Drungarth through the meat-labyrinth to uncover the ancient evil lurking within," that kind of thing. Hang on, I think I'm on to a winner here. I'm going to call the NHS and propose a shared Kickstarter. Don't worry, I won't forget about you when I'm rich.