Today's game is Alternative Software's 1987 Commodore 64 release Scare Bear. That's a title that really gets you thinking, huh? Thinking of low-effort Care Bears parodies, if you're anything like me. You know, it's a Care Bear, but scary! Oh man, how do I come up with this stuff? I'm a goddamn creative genius. Anyway, let's take a look at Scare Bear's cover art, maybe that will give us a hint about what to expect. 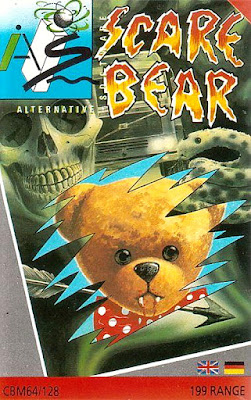 Damn, maybe I should have saved Scare Bear for the Halloween season! You've got skulls, you've got snakes, you've got a vampire version of Sooty whose fangs are dripping with virgin blood. Now we know why Sooty can only talk to people by whispering in their ear: it's just a ploy to get close to their neck. There's also a ghostly truck in the background, which is markedly less spooky than the other elements of the cover. Maybe the back of the truck is filled with werewolves or something. 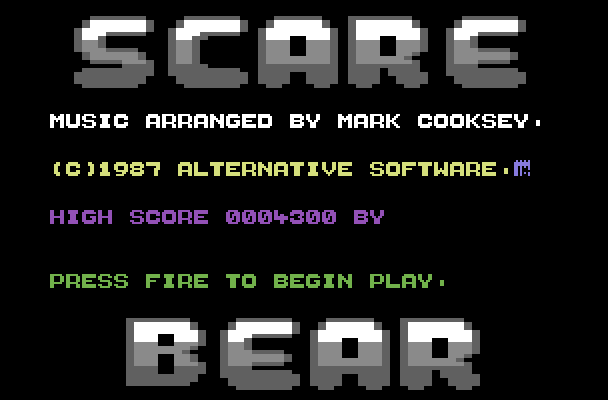 Into the game itself, and so far the amount of terror it contains is directly proportional to how scared you are of ugly chrome-effect lettering. 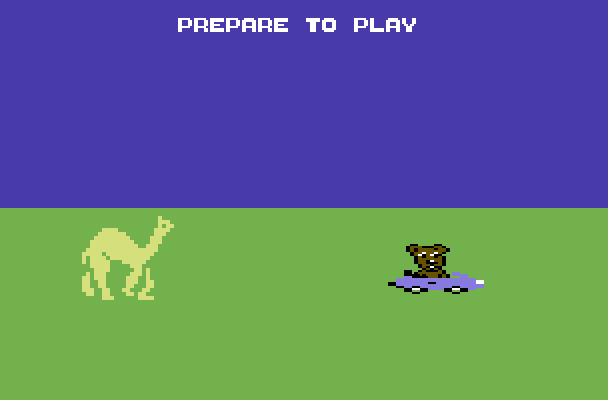 See, it says "Prepare to Play" but how exactly am I supposed to prepare when all I have to go on is an image of a camel and a bear in a convertible? Do some stretches? Write my last will and testament? Oh, I get it, it means that I should gird myself mentally in preparation for the terrors that are about to be revealed to me. Okay, I'm ready, fully prepared to either be scared by a bear or to see a bear be scared. The title's a bit fuzzy on which one it'll be. 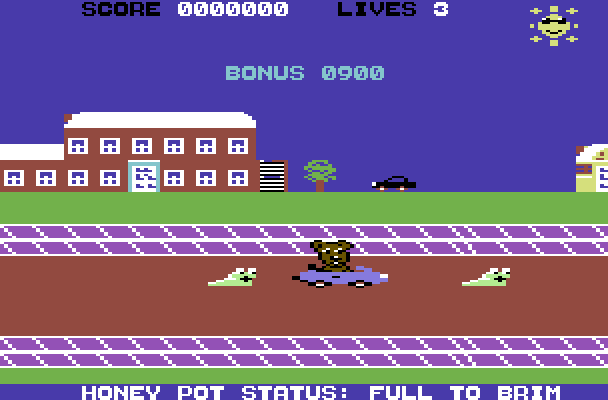 The terror will be along any minute now, I'm sure. This is just setting the scene. A vampire bear, out for a drive in the bright sunshine with the top of his car down - he must be some kind of super vampire to be able to resist the sun's rays! And those worms, yeah, the worms, they're, erm, corpse worms, slithering around all evil-like, looking for a fresh cadaver into which they can burrow for sustenance. Terror! 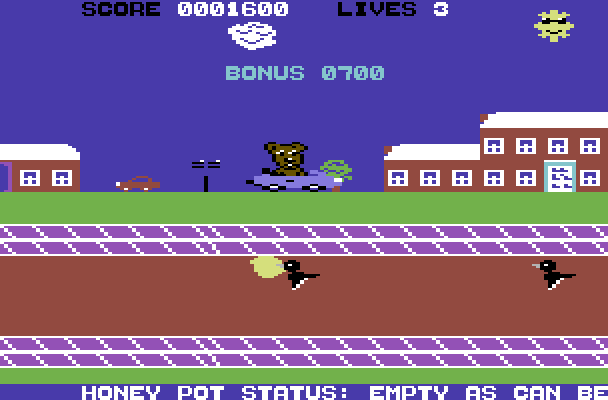 Okay, confession time: I may have been mislead by Scare Bear's cover art re: the content of the game. There are no scares here. I've been tricked, fooled, bamboozled! Get Trading Standards on the phone, I need to make a complaint about blatant false advertising. You can't put a realistic human skull on the cover of your game and then have it look like this, it's just not on. Why the bloody hell did you call it Scare Bear in the first place? Was Mister Snuggleton's Fuzzy-Wuzzy Road Trip already taken? Alas, I've been reverse Soft and Cuddly-ed and I'm not best pleased about it. 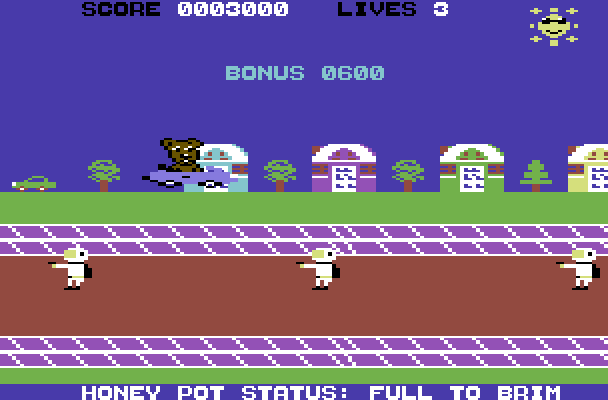 I'll admit, I'm disappointed. I was expecting bears and scares, but instead I've got bears and tiny space-men trying to kill said bear. It says something about the Commodore 64 games I've played in the past that not even for a moment did I think "well, maybe the game itself will be good enough to be worthwhile without the promise of spookiness," and just to clarify Scare Bear is not a good game. The goal is to survive as long as possible while your bear drives his car along the scrolling road. Things - I'd hesitate them to call them "enemies" because that implies animosity and mostly they're just there, bouncing around aimlessly - appear in the road, and you have to avoid crashing into them. To do this, you can make your car jump into the air, the jumping physics so thick and floaty that you'll wonder whether the atmosphere on Scare Bear's planet is a fifty-fifty mix of vaseline and treacle. And how do you make the car jump up into the air? By pressing down on the joystick, naturally. That's a good, sensible control scheme right there. 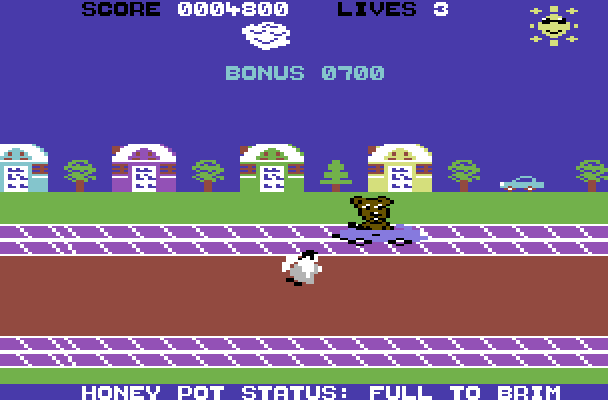 The closest thing to a scare that appears in the game is wondering what Scare Bear did that was so depraved that God sent down a legion of angels to deal with him.
The angels are where the game starts to get tricky, because they move around a lot more than previous enemies and are thus harder to dodge, but Scare Bear has a weapon with which to defend himself - when he's jumping, you can press fire to make him throw a dollop of honey either straight- or diagonally-downwards. The honey destroys any enemies on contact, but it takes a couple of seconds to recharge between shots. That's why the Honey Pot Status at the bottom of the screen says "empty as can be" sometimes. How is he refilling his honey pot? Is his car full of bees? Yes, his car is full of bees. It's got a bee-8 engine*. 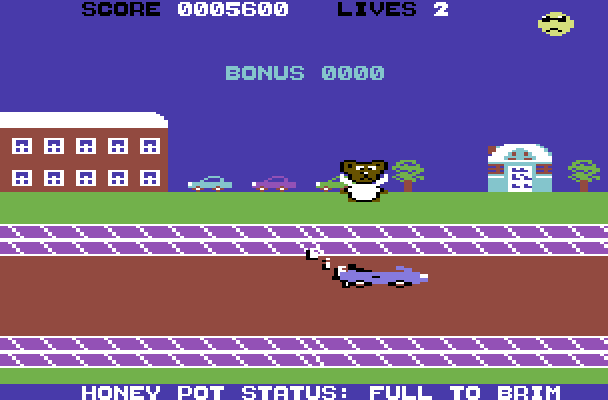 So Scare Bear isn't evil after all? He's good enough to go to heaven when he dies, at least. So much for him being a vampire, unless he's going to Vampire Heaven, where the necks are clean, the capes are flouncy and factor 500 sunblock is always on sale. 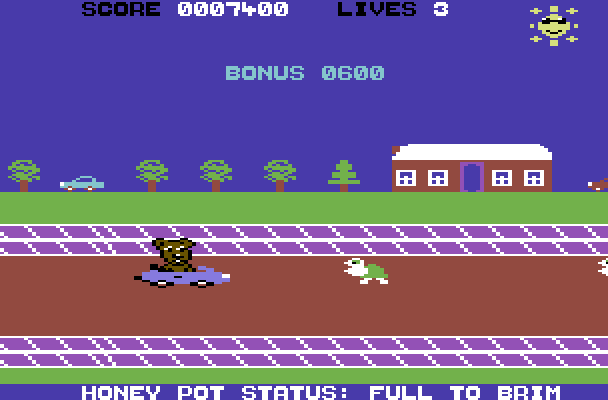 These enemies are turtles. I can see that quite clearly. So far all the enemies in Scare Bear are recognisable as something, even if it's not something interesting. 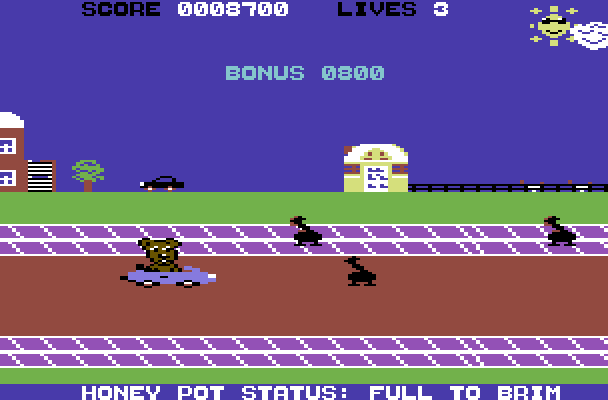 These things, however, I do not have a god damn clue about. Black roosters? Musical notes? A graphical error? They can be stopped by honey and they make a little "biff!" onomatopoeia pop up if you crash into them. This is all the hard evidence we have on These Weird Things. I'll get my best scientists on it, but I'm not confident we'll get to the bottom of this particular mystery, folks. 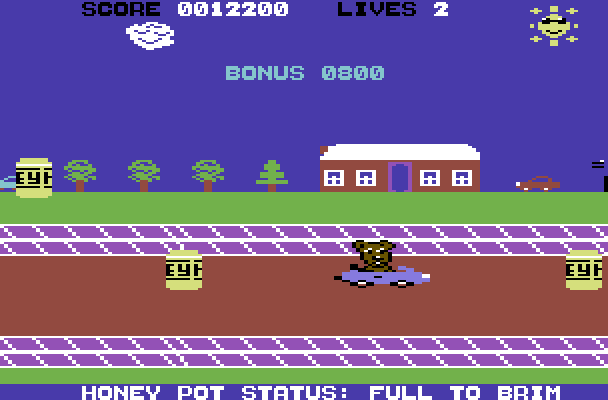 Even cutesy cartoon bears are not immune from the terrible wrath of the ironic punishment, seen here as Scare Bear is attacked by flying jars of honey. Honey Pot Status: LETHAL. Also annoying. Scare Bear gets gradually less fun to play as it goes on thanks to the enemy patterns becoming more and more frustrating to deal with. Making the game more difficult as it progresses is fine in theory, but when driving from left to right and dodging things is all there is to do it doesn't really make a difference. You could suddenly make the game extremely easy, have all the enemies float back up to heaven or be hollowed out by Winnie the Pooh or return to whatever dark corner of the Earth spawned those chicken-notes, and it would be no less boring - or no more interesting. The only thing that changes is the enemy sprites, and I can tell you that they are not nearly compelling enough to keep you playing for long. 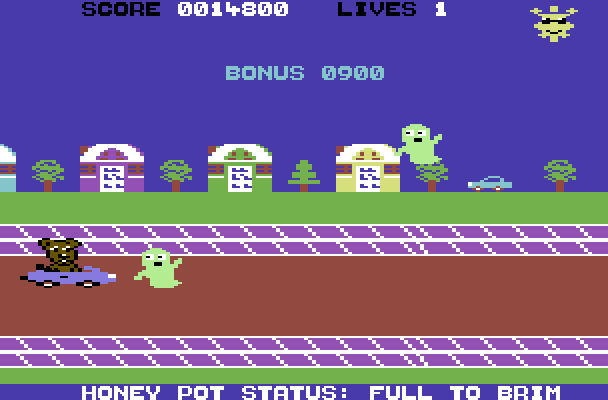 I ran out of patience (and lives) with Scare Bear once I reached these ghosts. I think my subconscious mind thought "hey, something vaguely spooky, that's good enough for me" and promptly shut up shop. They are rather adorable ghosts, mind you, definitely my favourite of the monsters I've seen and about as high a point as Scare Bear is going to be able to finish on. There's no reason to keep going, given that the "ending" is just a bit of text saying "Well Done, You've Made It!!!" that appears at the top of the screen if you play for long enough. Where was Scare Bear supposed to be going, anyway? To a better game, hopefully. 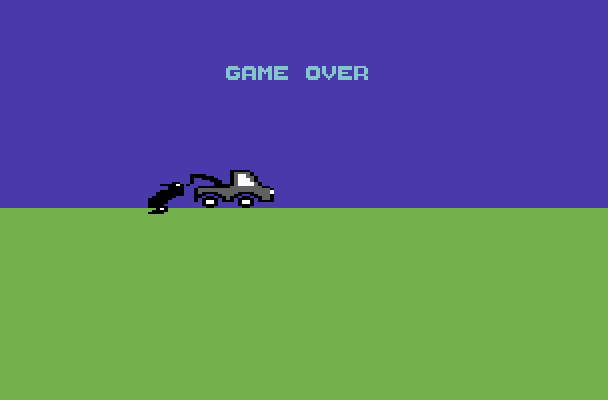 Game over. Scare Bear died in a horrible flaming wreck caused by crashing into too many ghosts. You know, some of those famously dense, solid ghosts. He was only identified thanks to his glass eyes surviving the ensuing inferno. 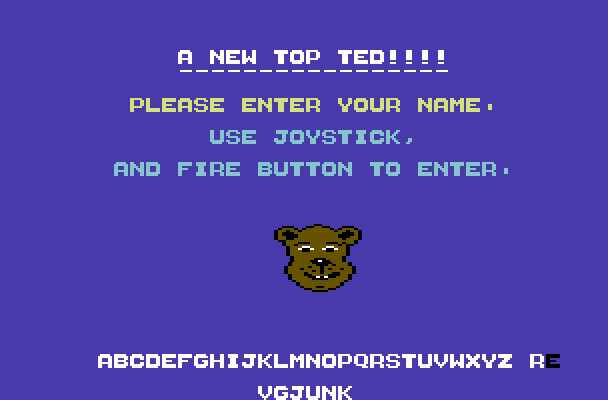 It was nice of Scare Bear to give a guest appearance to his inbred redneck cousin, huh?
Scare Bear is a limited and not especially interesting game that was, at least, a budget release and therefore deserves a tiny bit of credit for not being completely unplayable. Still, I feel betrayed. Hurt and betrayed, as anyone would if they were promised vampire bears and ended up with bears that were not undead creatures of the night. Oh well, at least the collision detection was good, he said, the computer game equivalent of saying "at least the burglars wiped their feet before stealing our precious family heirlooms."

* If you want to send me hate mail for that joke, the address is vgjunk@hotmail.co.uk. I wouldn't blame you.