Things are a bit of a mess here at VGJunk Towers right now, because we've got the decorators in. The house looks like an explosion in a charity shop from a universe where vacuum cleaners were never invented, and I'm sleeping on the sofa so that the paint fumes from the bedrooms don't send me on a nightmarish psychedelic journey of spiritual terror. With that in mind, I thought it'd be a good time to write some shorter articles about smaller games. That thought that immediately led me to the ZX Spectrum, because it has a lot of short, weird games. Here's one of them: programmed by James Closs and published by Silverbird, it's the bodacious and gnarly Skateboard Joust! 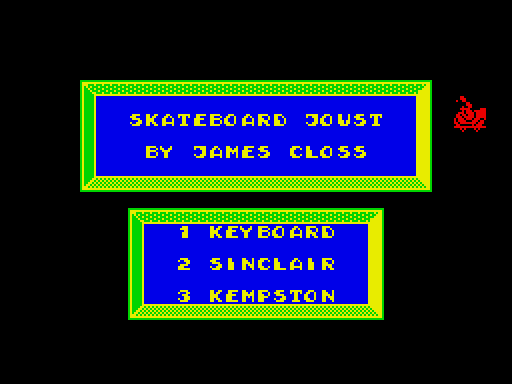 This title screen is neither gnarly nor bodacious. It gets the necessary information across, and the roast chicken rolling through the black void on a skateboard is an interesting touch, but it's hardly a work of art that grabs me by the scruff of the neck and demands that I play Skateboard Joust. 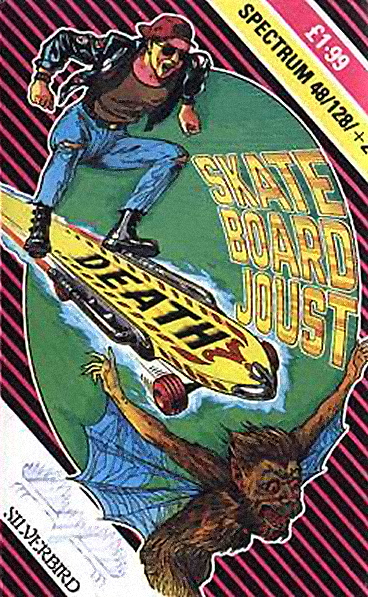 Luckily, the art on the cassette cover does just that. I'm just upset that there's been a game out there for all these years where a punk kid runs down a grotesque bat-ape on a skateboard emblazoned with the word DEATH and I've never played it before. Oh, I know I'm foolish to allow my expectations of a ZX Spectrum game to be raised by its cover art - it's like getting excited by a box marked "Delicious Cakes" even though you're sure you've just seen someone fill it with dog muck - but I can't pretend I'm not intrigued. I mean, I just looked at it again and noticed that it's a rocket-powered skateboard. The back cover describes the game as "hip radical, street cool, skateboarding in 2001!" I was struggling through my A-Levels as a laughably stereotypical angsty teen in 2001, so it'll be nice to go back and see how I could have been spending the first years of the new millennium. 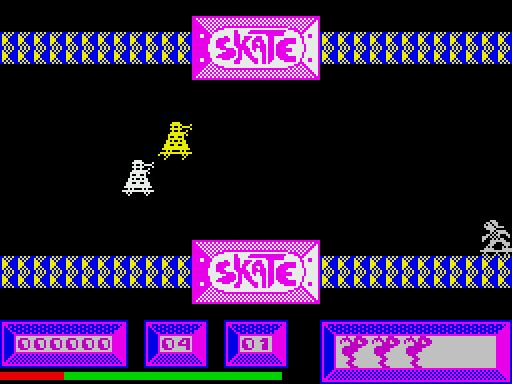 Okay, we're in. Cool. Street cool. I'm playing as the kid at the bottom-right of the screen, the one who's rebelliously backwards baseball cap looks more like Olive Oyl's hair. Over there are some Daleks. Flying Daleks on skateboards. Huh. They'll still have trouble getting up stairs, but at least they can get down stairs easily by doing a sick grind down the handrail. It's not immediately apparent what I'm supposed to be doing, other than presumably avoiding the Daleks. It'd be weird if they were the good guys. The big pink signs say "SKATE," but what else am I going to do? Fly? 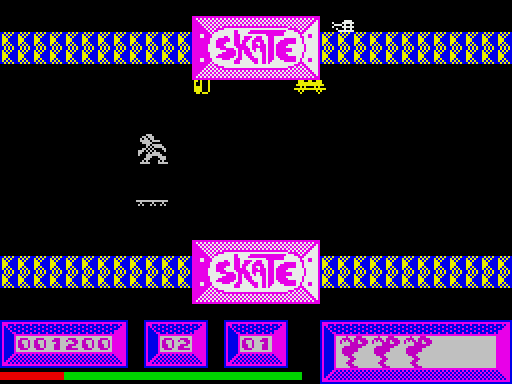 All right then, looks like flying it is. Skateboard Joust's controls are left, right and up, which allows our hero to fly around his single-screen prison. The topography of the stage is slightly odd - the screen wraps around, so if you hover-skate out of the left hand side you'll appear on the right, and while the blue-and-yellow bars (don't look at them too closely or your retinas will slide off your eyeball and down your throat in an attempt to choke you to death) are solid and you can skate along them, the pink SKATE signs are incorporeal, allowing you to scroll around the top and bottom of the screen on your mission to avoid the Daleks. 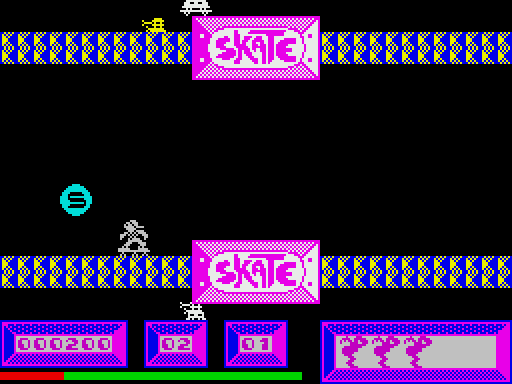 After seeing this power-up and spending a moment checking whether they make blue Skittles (they do), I realised I should probably be trying to destroy the Daleks because there's a timer counting down. I assume it represents your coolness level, and if it reaches the bottom you become terminally uncool and die because standing around doing nothing is not cool unless you're doing it, I dunno, outside a convenience store late at night? This brings me on to the name Skateboard Joust. I had imagined a game where two people on skateboards charge towards each other while carrying broom handles, each trying to knock the other to the ground like the knights of yore but with more way-cool attitude. You probably tried a similar variation in real life when you were a foolish child - I know me and my brothers did, only with bicycles instead of skateboards, clothes props rather than brooms and some truly spectacular bruises at the end of it. 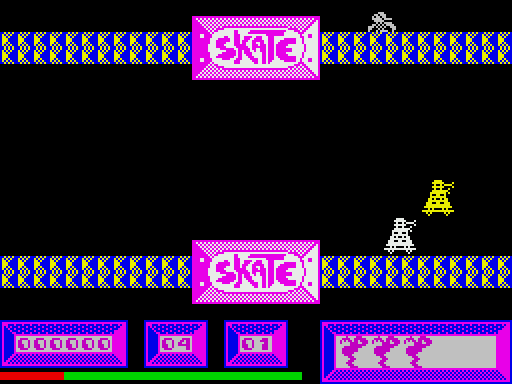 Anyway, that's not how Skateboard Joust works at all, and the "joust" in the name comes from Williams' classic ostrich combat simulation Joust, from which Skateboard Joust takes great bucketfuls of inspiration. Although it lacks Joust's tap-to-flap flight controls, the flight of Skateboard Joust's character is heavily affected by his momentum as he drifts smoothly around the screen. Rather than bumping into enemies from above to kill them, in SJ you have to press another button to make our hero jump from his skateboard, which will then work as a projectile that destroys any enemies it hits. You always land on your board, but you can only move it horizontally when you're separated from it, so line yourself up with an enemy and jump over them so that your board smashes into them and you land, unscathed, on the other side. Or cock it up and land on another enemy, because they tend to travel in murderous conga lines. Either way, if you manage to destroy a set amount of enemies without losing a life (because losing a life resets the counter) then you'll move on to the next screen. 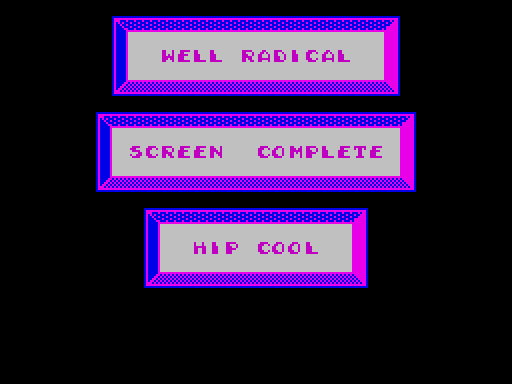 Growing up when and where I did, I cannot read that "well radical" in a mental voice that's not a) sarcastic and b) doesn't have "dickhead" added to the end. Still, it's nice to finally have confirmation that I am, in fact, "hip cool". Not quite as trendy as "elbow cool", but way more fashionable than "appendix cool." I'll take it. 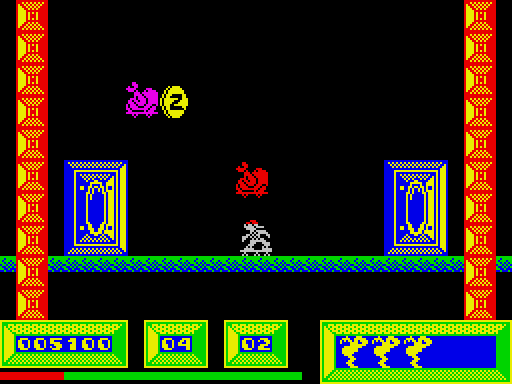 On the second screen, the Daleks have been replaced by roast chickens, which significantly ups their terror quotient, if you ask me. You could get food poisoning from an improperly-cooked chicken, whereas I've never understood the idea that Daleks are scary. It shouldn't be possible to be scared of a monster built from oversized pepper pots, sink plungers and elephant scrotums. Pity them, sure, but don't fear them.
As well as destroying genocidal wheelie bins from beyond the stars / Sunday dinner by smashing it with your skateboard, there are also various power-ups to collect. The most common are the "S" pills that simply add to your score, but there's also a screen-clearing smartbomb, a shield that makes you invincible, a different shield that makes you invincible but also allows you to kill monsters by skating into them and the Zapper, which is pictured above. 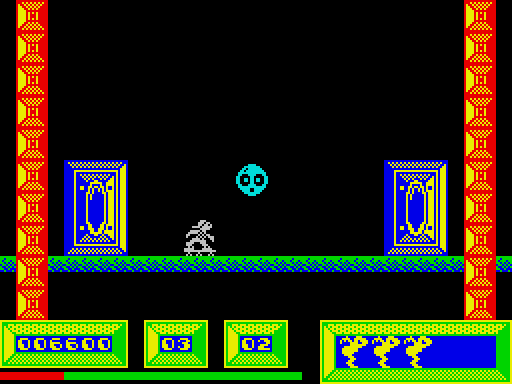 The Zapper is essentially Pac-Man's Power Pellet, and collecting it temporarily turns the monsters into a different, easily-eliminated form - the form of a paralysed, boggle-eyed head wearing an expression of utter confusion. It's the only reasonable expression to be wearing in this situation, I suppose. 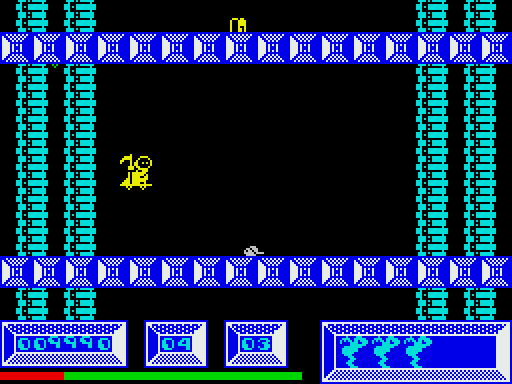 On the next screen, our hero hides from the grim spectre of Death itself, who is trying to liven up his moribund image by learning to skateboard. He can propel himself along with his scythe and everything. It's a good look, honestly. I think we'd all be more accepting of our own mortality if, when the time came, Death popped an ollie through the nearest window on his way to claim your soul.
One thing worth mentioning about this stage is that none of the background is solid, and when the level starts our hero will endlessly fall from the top to the bottom of the screen until you press a button. The scenery therefore does nothing but impair your view of what's going on, a graphical effect that Skateboard Joust is way too fond of using. 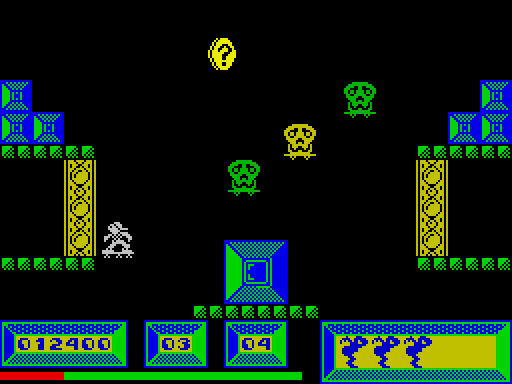 Now, giant skulls. Really miserable-looking giant skulls. I think these actually represent the skeletal structure of Horace's species. He died in a terrible skiing accident, and now his spectral form is condemned to roam the neon hellscape of this game for all eternity. On a skateboard. 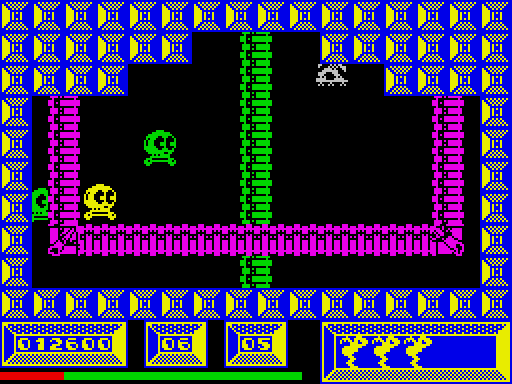 Oh no, the faces created by the Zapped power-up have shaken off their paralysis and are coming to put an end to our hero! It's difficult to get rid of them all when so much of the screen is foreground, and foreground so ugly that I'm beginning to suspect I somehow went back in time, personally offended the creator of Skateboard Joust and he settled on "permanent eye damage" as a suitable punishment for me. Fortunately the monsters move in predictable patterns, because this is a hard game but it would be nigh-impossible if the enemies moved about randomly. 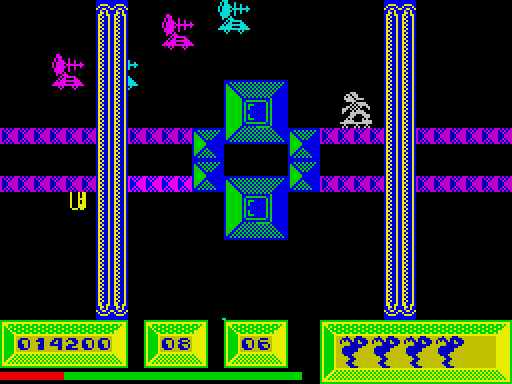 Never mind the roaming gang of TV antennae, I just noticed the four "life" counters at the bottom-right of the screen. What the hell is going on there? Are they supposed to represent the player character? Because that is not a good likeness, unless you're supposed to be playing as a winged frog taking a dump and the player sprite is the one that's not a good likeness. 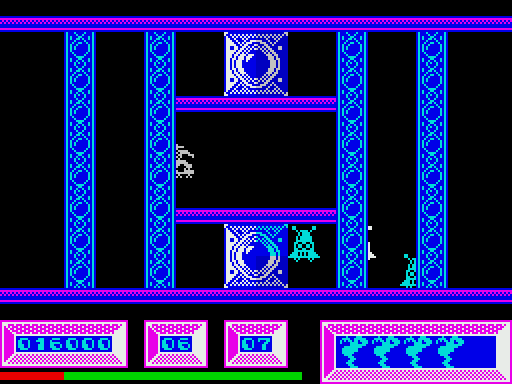 Skateboarding Darth Vader heads wearing deely-boppers attack! I get lost behind the foreground! It's business as usual for Skateboard Joust, but is it any fun to play? Well, sort of. It's ugly as sin and the preponderance of vision-obscuring foreground elements is occasionally frustrating, but the core gameplay mechanics are very solid. Flying around is fun, smooth and best of all consistent, with good inertia modelling that strikes a decent balance between being too stodgy and too flyaway. The collision detection is accurate, too, so even though it can be a real challenge to correctly line up your skateboard for the kill-shot at least you can't complain about it too hard when you miss. 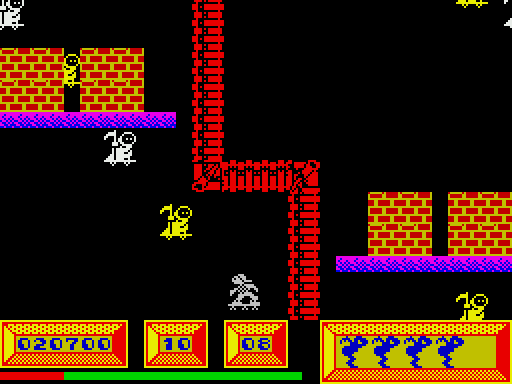 The Grim Reapers are back, which is appropriate because this is where I started to die a lot. Eliminating ten enemies without being hit is quite a big ask, unless you get really lucky with the power-ups. It's doable, but you have to think to yourself "do I really want to expend all this time and effort just to see another visually punishing screen of the same thing?" 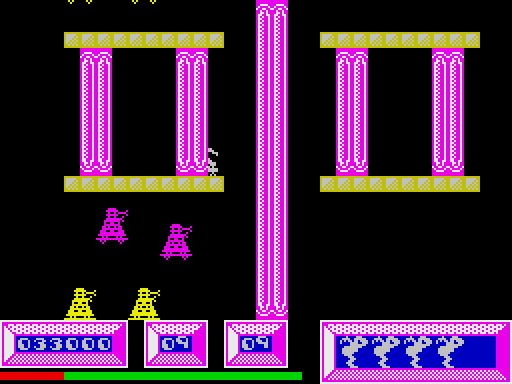 Well, it turns out I did, just that one more time anyway, but as the Battenburg-coloured Daleks drifted into view I decided that I'd had quite enough of Skateboard Joust, thank you very much. At it's core it's not a terrible game, but it's wrapped in such an unappealing layer of bad - and worse, bland - graphics that it looks like a bad game. Flying around on your magic skateboard is handled well, the wheeled, murderous roast chickens are a nice touch, but really I could have stopped playing after five or six screens and not missed anything. That's Skateboard Joust, then: plenty of skateboards, no medieval jousting. If any knows of a good videogame version of jousting, then let me know. Don't say Defender of the Crown, because I'd have to call you a liar and neither of us wants that.