Today, I thought I'd write about some covers from Sonic the Comic. I'm not sure why. Maybe I had a half-remembered dream about it. Maybe the internet's unending thirst for weird Sonic the Hedgehog fanart finally tipped me over the edge. Who knows?
If you're too young or not British enough to remember Sonic the Comic, it was "the UK's Official Sega Comic." I'm not sure if it ever had much penetration outside these sceptered isles, but for British kids it meant a fortnightly slice of cartoonish Sega action. Most of the strips focused on Sonic, naturally, but other Sega franchises were represented, including (somewhat surprisingly) a ton based on Decap Attack. I was never really into Sonic the Comic as a kid, mostly because I was never really a fan of Sonic, but I had a few issues here and there and I remember it being mostly enjoyable kid's comic stuff that really stretched out the premise of Sonic the Hedgehog, Well, there's not much plot in the original games beyond "run around a loop-the-loop, jump on a fat man," is there? Still, Sonic the Comic is fondly remembered by some, and to those people I issue an apology - I'm sorry if you think I'm being too harsh on StC, but just know that I only lash out at others to hide my own insecurities. 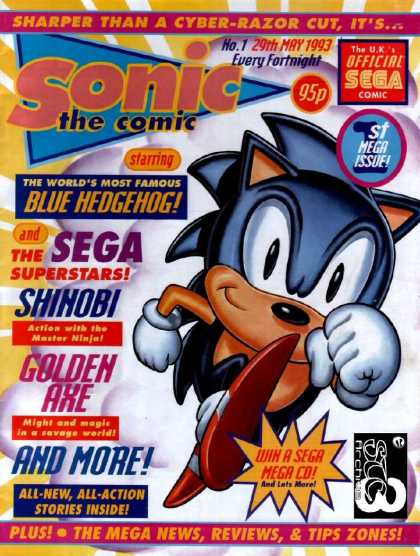 To establish a baseline, let's start at the start with Sonic the Comic issue one. It's pretty typical of the series' covers: a big picture of Sonic, bright colours and exclamation marks up the wazoo. It's all as you'd expect for a 1993 publication called Sonic the Comic. Two things stand out to me - okay, three things because the idea of a comic costing less than a pound is making me feel really old. The other two are the banner at the top that references Sega's "Cyber Razor Cut" advertising campaign - a set of commercials that imply you need to go to a barber / cybernetic enhancement clinic to be strong enough to handle the raw power of the Megadrive. There's an accompanying song with one of the worst forced rhymes I've ever heard, I wrote about it years ago. The other thing is the proud declaration that Sonic is "the world's most famous blue hedgehog!" Well, of course he is, he's the world's only blue hedgehog. I'm the most famous person currently writing a stupid article about old videogame comics, but that's a meaningless statement because I'm the only person doing that. At least I bloody well hope I am. 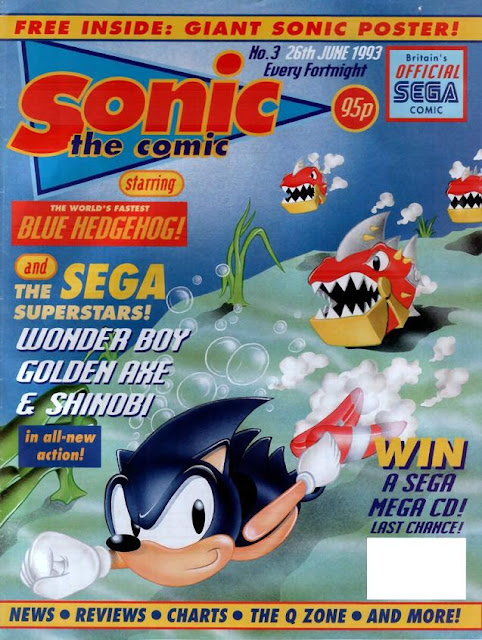 By the third issue this bold claim has been changed to "the world's fastest blue hedgehog!" See, that tagline suffers from the same problem, doesn't it?
The shark-piranha hybrid robots are admittedly quite cool, although I only bring them up so I can complain about the Sharkticons in Transformers being called Sharkticons despite being neither sharks nor Decepticons. 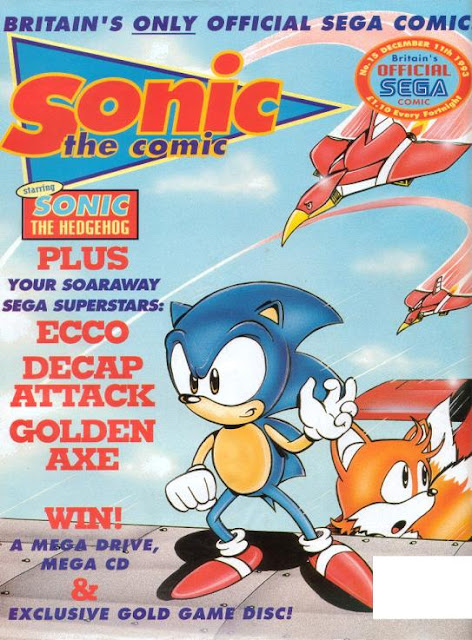 Sonic's default facial expression on these covers is "knowing smugness," even when he's failed to notice a squadron of robot eagle-planes swooping in behind him. Tails has spotted them, though, unless the artist captured him looking behind himself for the first time ever and realising he's a two-tailed mutant freak. As I say, I never really read Sonic the Comic as a kid but I'd be surprised if this very scene didn't play out many times, with Sonic not registering danger from inside his impervious bubble of self-satisfaction while Tails performs the usual sidekick role. 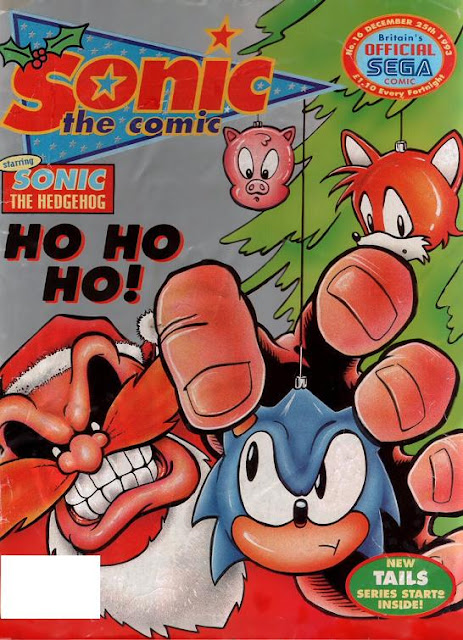 Blimey, that took a dark turn: Dr. Robotnik has decapitated Sonic and Tails and he's using their severed heads as Christmas decorations. And here you thought Robotnik was the "harmless buffoon" type of villain, not the "decorate his lair with the skulls of his fallen enemies" kind.
You might be wondering how Dr. Robotnik managed to cross over into the world of Looney Tunes and murder Porky Pig too, but that's not Porky Pig. It's an original Sonic the Comic character called Porker Lewis, which sounds like the nickname you end up with if you're a fat kid at Eton. Porker Lewis wears a leather jacket in the comics, and given that the world of Sonic the Hedgehog is filled with sentient animal-men Porker is in for an extremely awkward conversation when he eventually meets a cow-person. 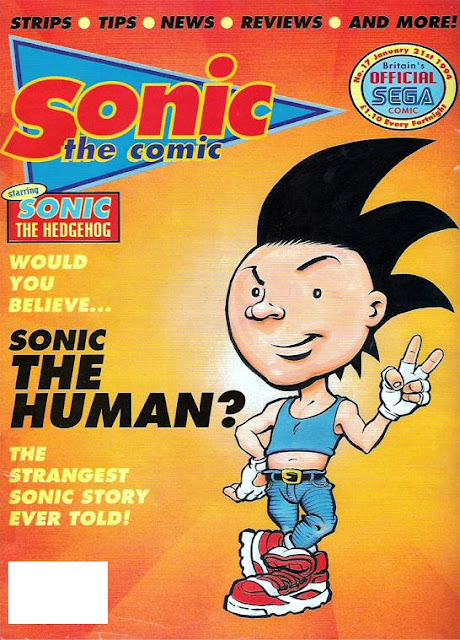 You know, before the proliferation of the internet, "Sonic the Human" might well have been the strangest Sonic story ever told. Now it's not even a blip on the weird-o-meter. Also, for a character built around the concept of being cool I find it hard to believe that Sonic would dress in a crop-top and fingerless gloves, even during the mid-nineties. Maybe the bare midriff was intended to distract from his grotesquely oversized head, Newsflash, Sonic - it does not. 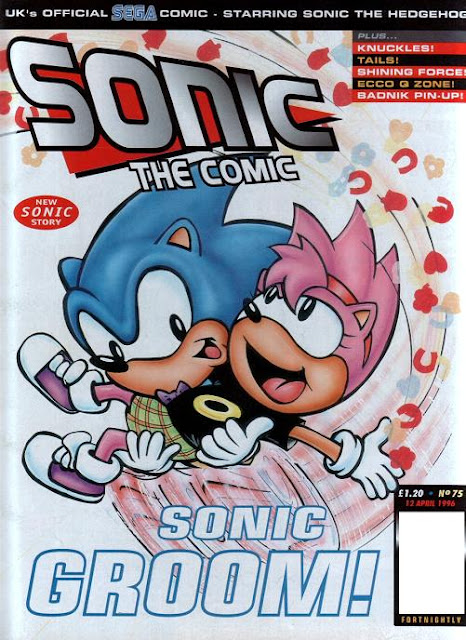 Speaking of clothes, Amy Rose features heavily in Sonic the Comic and she is always fully dressed, which only serves to highlight Sonic's nakedness. Thankfully Sonic put on some clothes to attend his wedding - you can see he's wearing a little bow tie to go with his gloves. I do hope he's also wearing a suit or something, otherwise he'll look like a Chippendale. 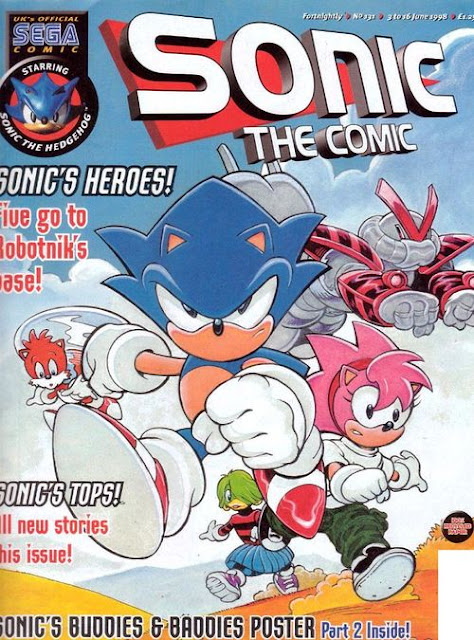 One thing you notice if you look at a lot of Sonic the Comic covers is that Sonic looks weird when viewed straight-on, his spines being rather difficult to illustrate from that viewpoint. Now you know why Sonic is blue - because if he was green, he'd look like a Christmas tree. 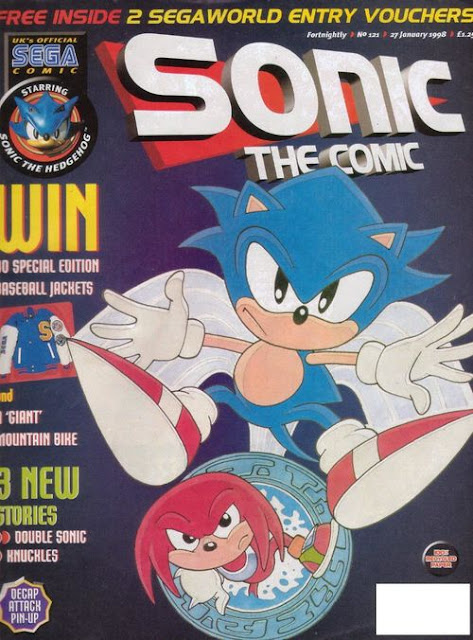 See? He just looks like he's got a bizarrely-shaped skull. Actually, the first time I saw this cover I though Sonic had sprouted wings and Knuckles was climbing out of a toilet. That'd be a much stranger Sonic story that Sonic the Human. 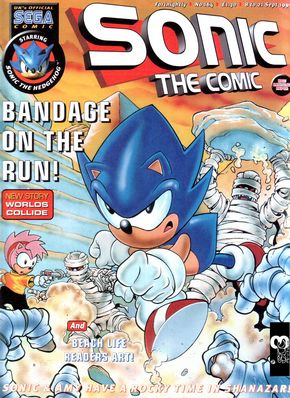 I would dearly love to believe that somewhere out there was a child who occupied the tiny overlap at the centre of a "Sonic the Comic reader / Wings fan" Venn diagram, and that said child laughed heartily at the "Bandage on the Run" pun. 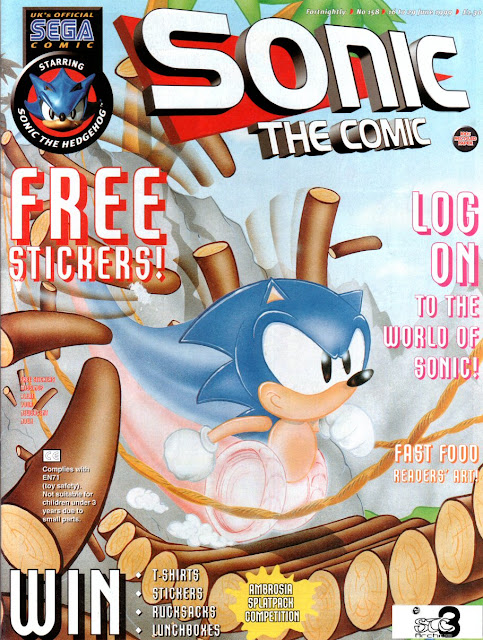 No, it's fine, Sonic. Nobody else wanted to use that log bridge, you go right ahead and destroy it, you thoughtless jackass. What if Tails wanted to follow you across? Oh, right, he can fly. Well, what about Knuckles? Right, he can glide. Okay, maybe Amy Rose wanted to use it... but you want her to stay as far away from you as possible, of course. I give up, you've beaten me. Destroy as many log bridges as you like. 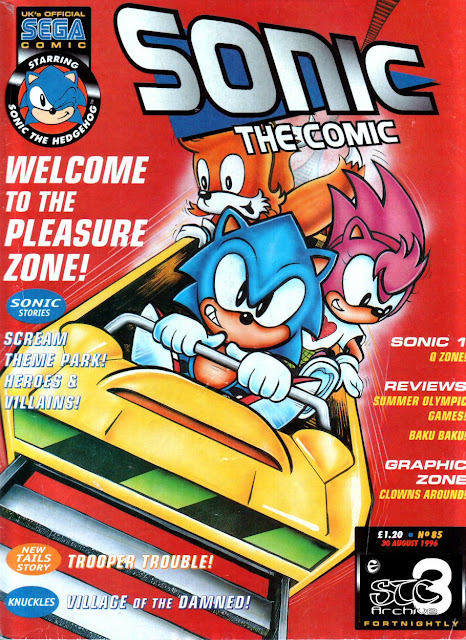 Note to self: start using "Welcome to the Pleasure Zone" as a chat-up line. Further study will be required to determine whether it's more effective if I point at my crotch while doing so. 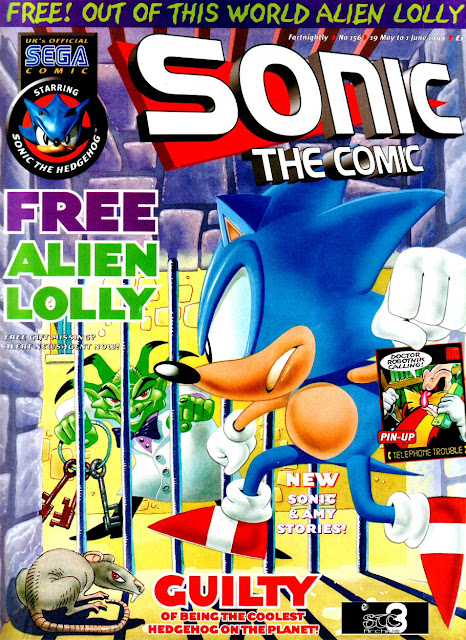 Sonic is imprisoned, guilty of being the coolest hedgehog on the planet, a crime that I can't help but feel was forced onto the statute books solely to harass Sonic. It's not even necessary, either: surely there must be laws in place that mean Sonic can be arrested, if not summarily executed, simply for appearing in Sonic Underground? 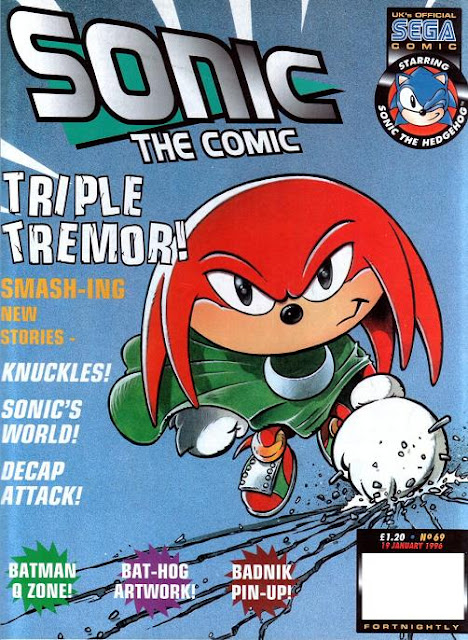 "Yeah, I punched the floor so hard that it shattered. No big deal, it's just a cool thing I can do. No, it's not a dress, it's a poncho!" 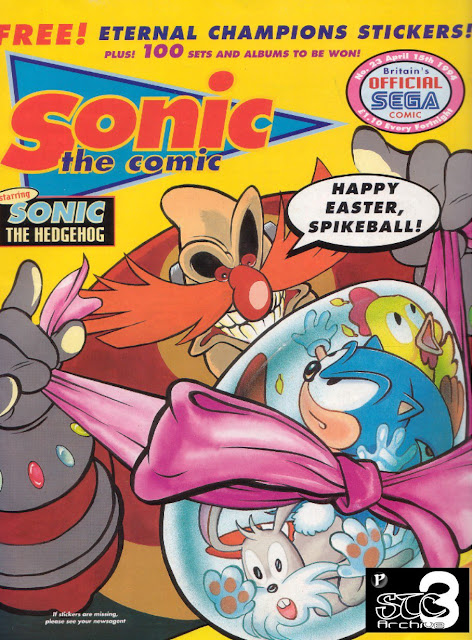 More seasonal punishment from Dr. Robotnik, living up to his Eggman alter-ego by trapping Sonic and friends in a transparent Easter egg. It's a wonderful image, although I can't decide what I like best about it: that Robotnik shoved a bunny and a chick in there with Sonic to really hammer home the Easter theme, or that he took the time to pretty the whole thing up with a ribbon. Hang on, those gems on Robotnik's glove... is he wearing the Infinity Gauntlet? I demand that the next Avengers movie opens with Robotnik trapping Thanos in an Easter egg, stealing the Infinity Gauntlet and bellowing "I HATE THOSE HEROOOOES!" 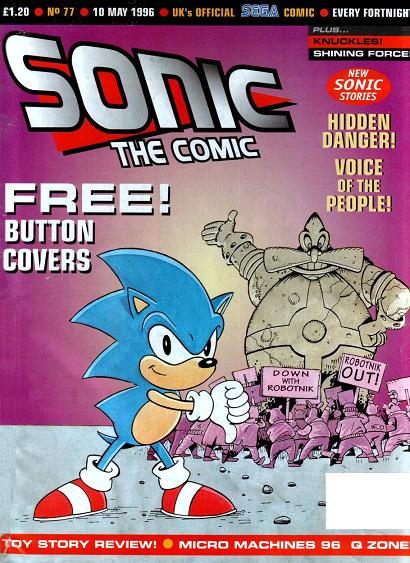 "Hi folks, I'm Sonic the Hedgehog, the world's most famous blue hedgehog. Look at these idiots behind me. They're protesting at a statue. I think they think it's the real Dr. Robotnik. What a bunch of idiots. Chilli dogs, you're too slow, etcetera." 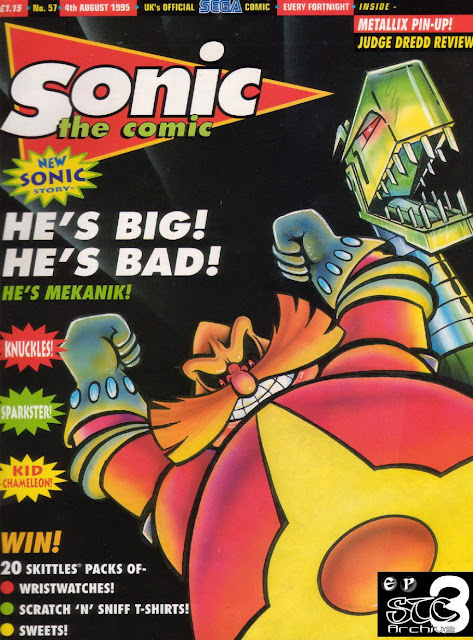 Look at Robotnik's forehead and eyes. Now look at them again. Looks like the underside of a human nose, doesn't it? Creepy. 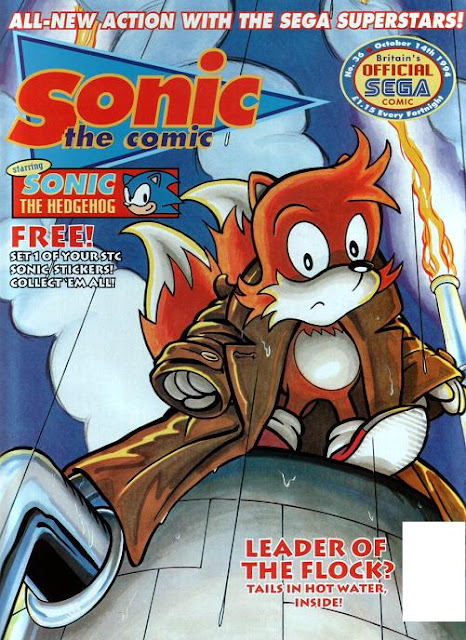 "Mobius is afraid of me... I have seen its true face. The Zones are extended gutters and the gutters are full of blood and when the drains finally scab over, all the vermin will drown. The accumulated filth of all their sex and murder will foam up about their waists and all the badniks and Eggmen will look up and shout "Save us!"... and I'll look down and whisper "erm, I'll get Sonic, he's much better at that kind of thing." 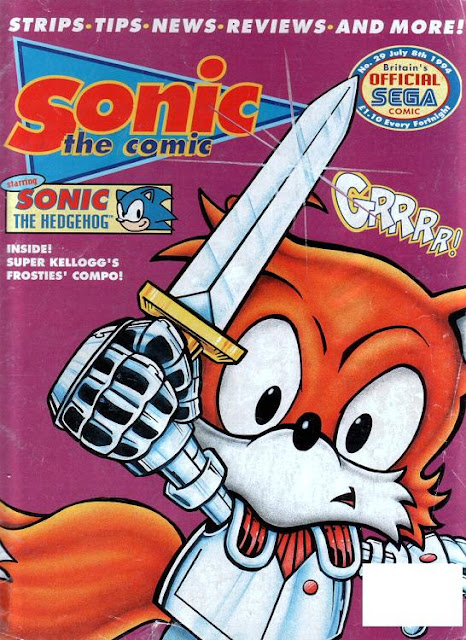 It appears there were several attempts to make Tails look tough. None of them worked. This one is undermined by the fact that it looks like the sword is saying "Grrrr!" and not Tails. Tails looks like he doesn't have a bloody clue what's going on. 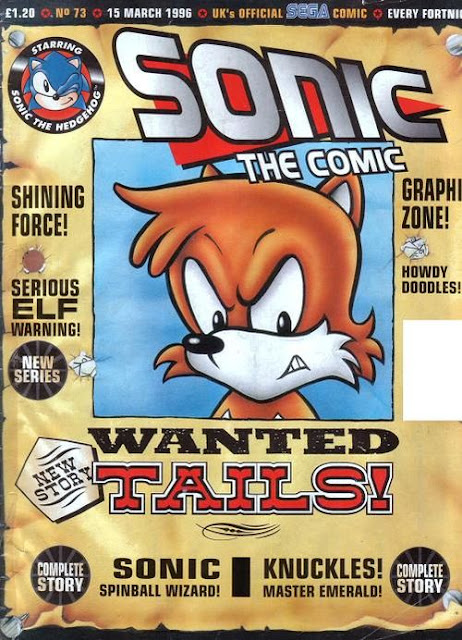 Again, I'm not buying Tails as a tough guy. He wasn't even in Sonic Underground, so he's innocent of that heinous crime. So what is he wanted for? Aggravated cuteness? Sidekicking with intent to quip? I suppose I could read the issue in question to find out, but that would feel like I had been defeated, somehow. Instead I'll just assume Tails is wanted for burning down an orphanage.

To finish, here is a collection of Tails' goofy facial expressions. 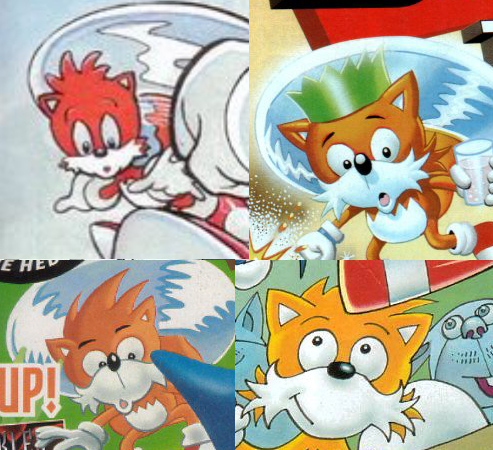 Tails did not come out of this article with much dignity, did he? And if those weren't goofy enough for you, I've got one left. 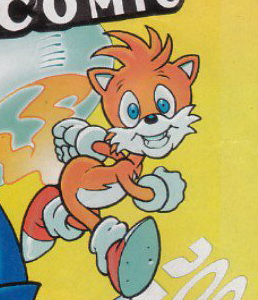 Hey Miles, maybe you should lay off the caffeine for a while? You look kinda wired. Jaunty, but wired.