Today's game is a madcap medical merry-go-round that is not only a computer game that can be played for "fun" - although the amount of fun you'll get out of it is limited at best - but which can also teach children the valuable life-lesson that touching used syringes or giant discarded scalpels will lead to almost immediate death. A public information film masquerading as an 8-bit home computer game, it's Genesis Software's 1987 ZX Spectrum NHS-em-up Bloody! 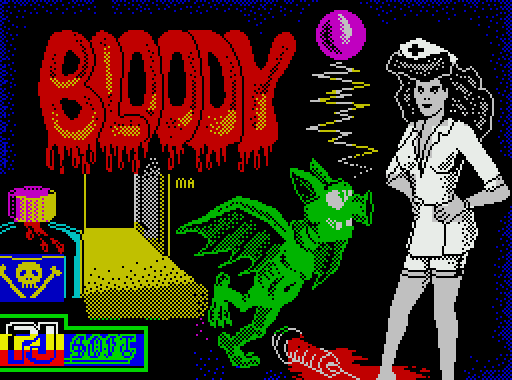 A small green demon falls in love with a nurse wearing a bin bag as a hat. I don't think she's a real nurse. That can't be a regulation uniform unless she works at St. Ann Summers hospital, and any real healthcare professional would avoid standing in a pool of blood. That syringe should be in a sharps box, not lying on the floor of the ward. 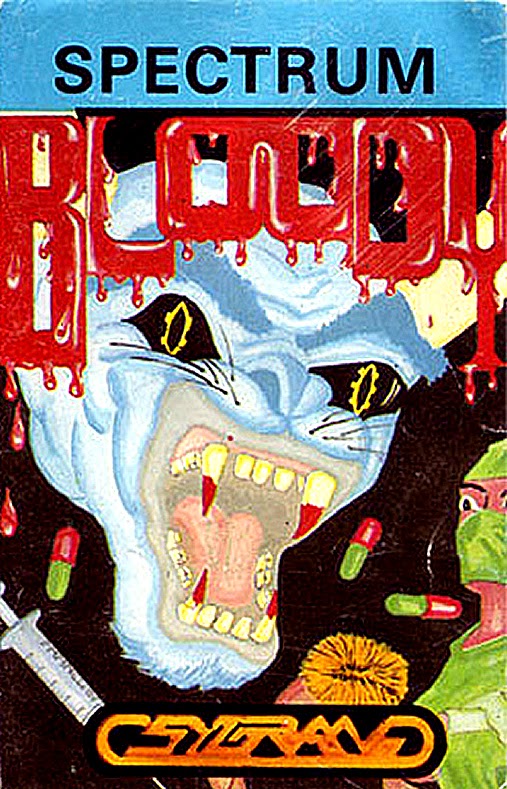 Full disclosure - I'm writing about Bloody thanks to stumbling across its cover art while working on the Spooky Computer Game Covers article. It's a striking image, I'm sure you'll agree, and I just had to know what kind of game could be responsible for the artist capturing its essence as a hypoxic cat head menacing a surgeon. My immediate thought was "not the good kind," but we'll see how that pans out as I play the game. 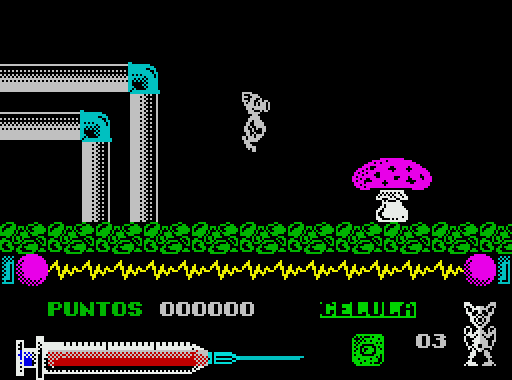 Like seemingly every Spectrum game I write about, Bloody is a hover-and-dodge adventure with a ridiculously strict difficulty level and the ability to fly instead of jumping like any self-respecting platform hero. You play as the creature in the middle of the screen, some mixture of a Mogwai, ALF and one of those kid's pop guns that fire ping-pong balls. You fly your gremlin around the screen, avoiding as many things as you can, while striving to move to the right. Your character can launch projectiles out of his mouth / snout / face-hole to destroy enemies. So far so standard, but the real question is why? 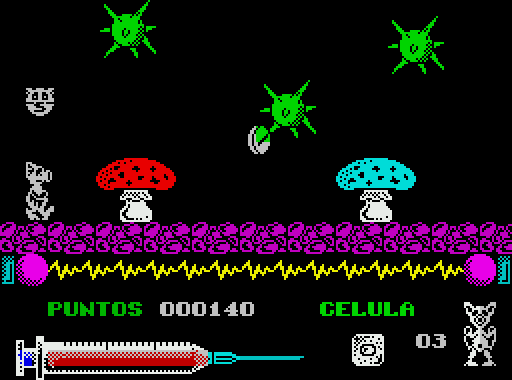 To answer that, I turned to Bloody's instructions. Now, Bloody is a Spanish game, but thanks to a combination of Google Translate and the tattered remnants of my Spanish GCSE, I just about managed to figure out the story. You character is actually called Bloody, and he's an alien from space, not a grotesque devil from Hell as the cover art would suggest. Bloody takes a trip to the Solar System, where his sensors detect life. This is great for Bloody, because he's hungry and the only thing he eats is animal blood. That's right, Bloody's name is the equivalent of me calling myself Colonically Unhealthy Processed Meat. Anyway, Bloody locates a veritable feast in the form of General Hospital's blood bank. The translation gets a bit fuzzy here, but I think there's also something about Bloody falling in love with Patricia Perez, the nurse in charge of the blood bank. So, the aim of Bloody is to help an extraterrestrial vampire fight his way through a nightmare hospital so he can drink up all the vital human blood meant for extremely ill people, and possibly to get laid. It's not what I was expecting from the cover art, granted, but as a slice of unexpected weirdness I'll grab it with both hands. 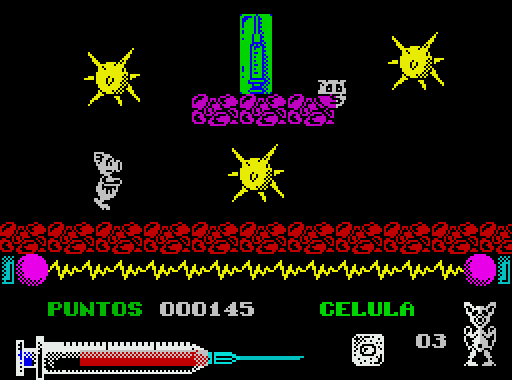 If War of the Worlds has taught us anything, besides the chances of anything coming from Mars being a million to one, it's that aliens are not adapted to handle the disgusting germ-riddled atmosphere of Earth. This proves to be true for Bloody, and as he makes his way through the hospital his gravest danger comes from disease. You can see a disease in the screenshot above, it's the depressed space hopper with an S on the front. Touching one of these causes Bloody to contract a randomly-assigned illness, denoted by the colour of the cell at the bottom of the screen. If you don't cure Bloody's illness quickly enough, he dies - and he doesn't just die, it's game over regardless of how many lives you had left. Don't worry about forgetting that he's ill, though: the developers thoughtfully made the outer borders of the screen flash in a manner that should worry any photosensitive epileptics playing when Bloody is about to peg it. 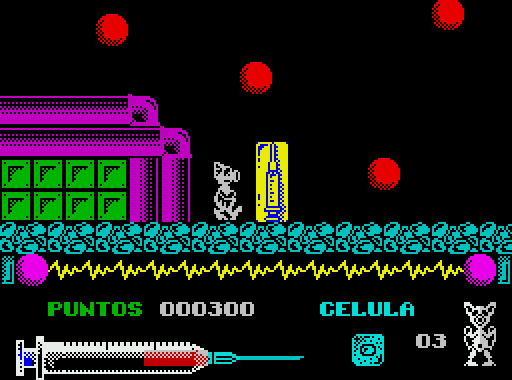 To cure Bloody of whatever haemorrhagic fever or brain-melting virus has infected him, you have to find and fly through the appropriately-coloured and impractically large syringe. In the screenshot above Bloody is infected with the blue disease, so this yellow syringe is no help to him and he will probably die suddenly, alone and unmourned on a hostile alien world. There are also white syringes for restoring your health, which you will need to make the most of because coming into contact with almost anything drains your health, presumably because it's all coated in germs. 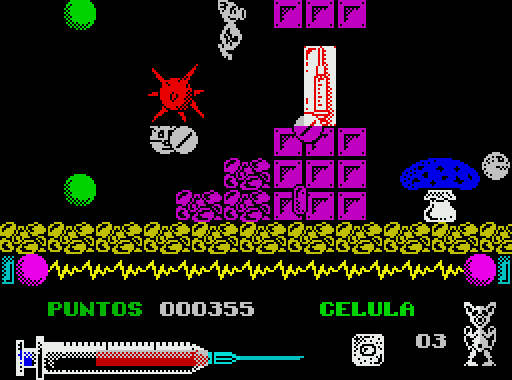 The need to find and remember the locations of these syringes adds a certain amount of not-unenjoyable tension to the game, and once you've got the hang of Bloody's momentum-heavy flight controls they make negotiating the obstacles challenging but in a predictable and thus almost kinda fun way... but sadly Bloody throws away this potential by being a royal pain in the arse to play. For starters, in the traditional manner of Spectrum platformers enemies randomly pop onto the screen constantly and hover into you, totally unimpeded by the physical world around them. Or maybe they'll spawn right inside you, where you can't dodge them? Who knows?! That's the kind of mystery and excitement that awaits you if you play this game. Aside from the disease-carrying enemies there are flying mouth-lump born from a rotten branch that dropped off Pac-Man's family tree, and pills almost as big as Bloody himself. 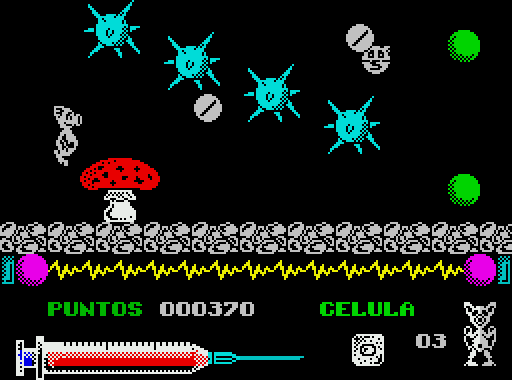 You might think that in an environment so biologically hostile as this one that large amounts of medicine would be a welcome thing to find, but I suppose eating 80% of your body weight of any drug is not going to be good for you. Also, don't let the Daily Mail see that mushroom growing out the hospital floor, they'll be knocking out articles about EUROPE'S SHAMEFUL THIRD WORLD HOSPITALS for weeks. 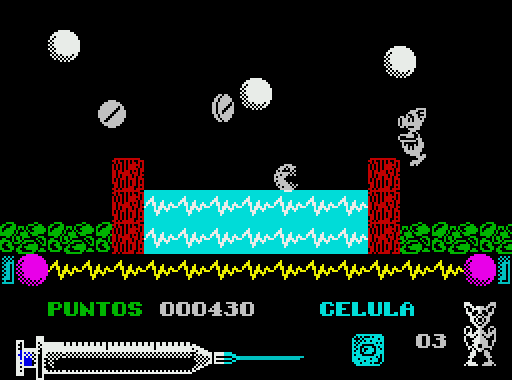 I was going to complain about Bloody being such a weakling that even water saps his life-force faster than listening to Christmas music in June does to mine, but on closer inspection I think that blue-and-white stuff might be electricity. I can cut Bloody some slack if that's the case. I'll just have to remember to steer him away from the large wooden trough filled with unmoving, inert electricity, although I notice that Nega-Pac-Man can splash around in it just fine. 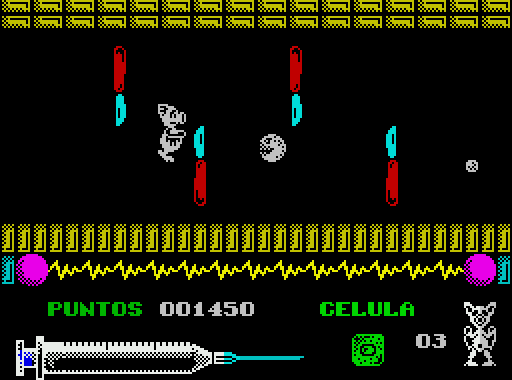 A personal reminder: never visit a Spanish hospital because apparently they use penknives as scalpels. Also the corridors are packed with enormous penknives. 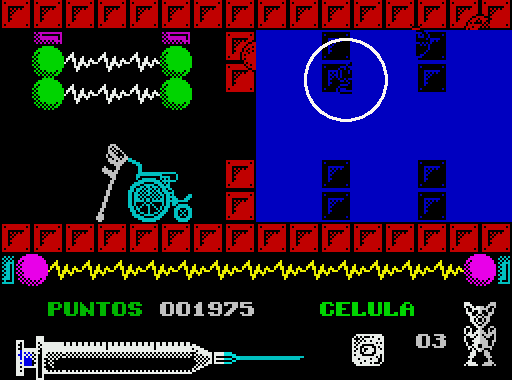 One especially aggravating thing Bloody does a couple of times is to make you walk behind foreground scenery that completely blocks your view of the action unless you happen to be near a window. I've circled Bloody for you, because I'm nice like that. Wouldn't want you getting eyestrain searching for him, it could be that NES Where's Waldo game all over again. I know Bloody is a grotesque little freak, but as much as I'd like to not be looking at him it's kind of important to my ability to finish the game. 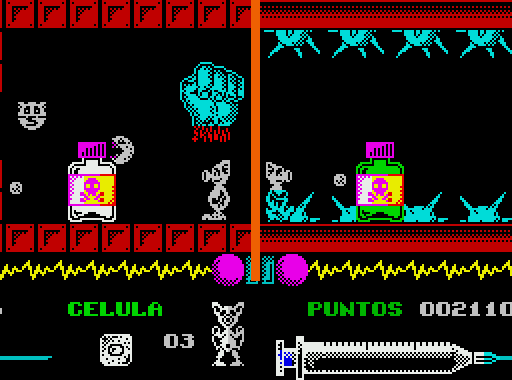 The poor design decisions reach a peak with this transition between two late-game screens. The orange line represents the edge of the screen, right? And remember that you can't see the next screen until you enter it. So, travelling from left to right you have to avoid the severed hand. I understand this, I've watched Evil Dead II enough times to know that severed hands are bad news. You can't fly past the hand, though, because it's taking up so much of the screen, so you have to walk under it... where the next screen begins immediately with spiked balls all over the floor. Thanks for that, guys, it's definitely a part of the game I enjoyed and I didn't loudly describe it in terms that would make a sailor with Tourettes blush. To proceed unscathed you have to fly diagonally upwards through the narrow gap between, ahem, the fist and the balls, which would be a difficult task even if you could see where you were supposed to be going. Which you can't. Screw you, Bloody. 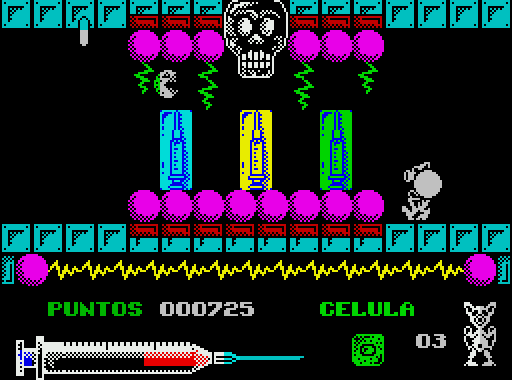 Other than the above, there's not much else to say about Bloody. It's a very short game, about thirty screens or so, and if you knew what you were doing you could easily beat it in less than ten minutes. All that remains is to show you a few more screen, because if Bloody has anything going for it, it's the nightmarish neon hellscape that this hospital inhabits. For example, there are giant skulls aplenty, a common decorative motif of all hospitals. All hospitals I've ever been to, anyway. Of course, my local hospital is a meat processing plant by day, and at night vagrant who calls himself Doctor Fun sneaks in and performs surgeries that are, at best, medically unnecessary. It's the postcode lottery, what can you do? 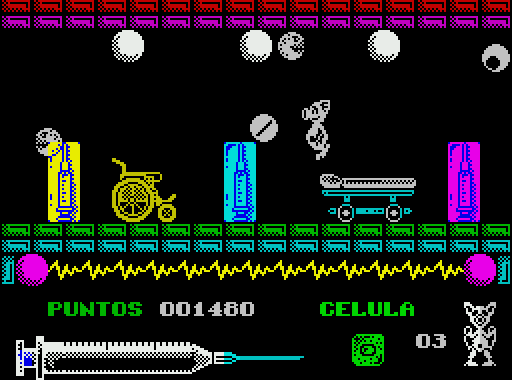 I do enjoy those syringes, though. It's as though someone tried to counteract patients' fear of needles by building a massive, cheerfully coloured Fisher-Price-looking needle, not realising that a) the increased size of the needle only scares patients more and b) these syringes take three people to operate, which is not an effective use of an already strained workforce. 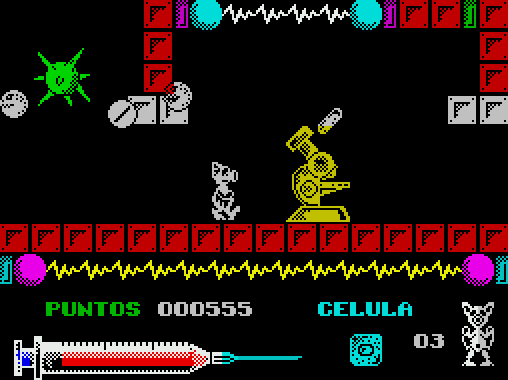 I bet these microscopes don't get much use, either. There's not much need for magnification when the germs are large enough to be visible to the naked eye and are also trying to eat your naked eyes. 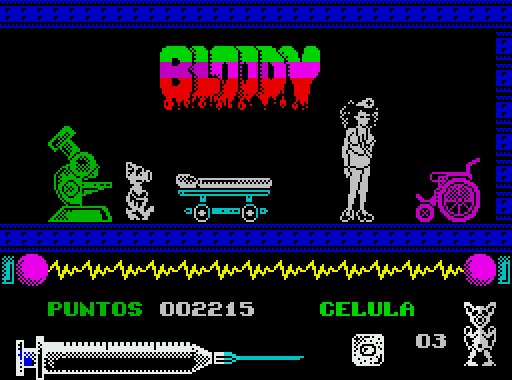 If you do have the patience and dedication (or the POKEs) to reach the end of Bloody, your reward is a trip to the only room in the game that isn't trying to murder you, where the lovely Patricia Perez is waiting. She's brought some helium balloons that spell out Bloody's name, how thoughtful of her. Now Bloody can take his reward - all the human blood he can drink and the chance to make some hideous hybrid babies, which funnily enough is how Tom Cruise is usually rewarded for his movie work.
Bloody, then. Not a great game. Barely even a game at all, and not just because it hardly lasts ten minutes. You float around, you die a lot, you complain about things hurting you even though you were sure you weren't touching them. The virus infection system could have been interesting had it been more fleshed out, and the mechanics of Bloody's floaty flight are relatively well implemented, but on the whole it's a frustrating experience that didn't live up to the promise of its box art. To be fair, no Spectrum game was going to live up to that, though, was it?

Six pumpkins on the Halloween-O-Meter for this one - it didn't have much in the way of monsters, misty graveyards or jack 'o lanterns, but it does possess enough of an unsettling atmosphere to get some Halloween cred. This is true of a lot of Spectrum games even if they aren't supposed to be creepy, thanks to the brightly coloured sprites floating around on a black void of a background like the terrifying spectres that haunt each and every one of us on All Hallow's Eve.