As much as I enjoy writing three-and-a-half-thousand word articles about arcade games that are nearly a quarter of a century old - and I do, I really do - I have to admit that doing so takes a lot of time and a fair amount of effort. Time and effort that could perhaps be more fruitfully spend bettering myself as a person, crying in the shower over my lack of personal betterment or even getting started on the bloody VGJunk book. With that in mind, here's an article about a game so small and inconsequential that I surely can't wrangle more than, ooh, two thousand words out of it - Tymac's 1984 Commodore 64 wizards-are-immoral-dickbags-em-up Gandalf the Sorcerer! 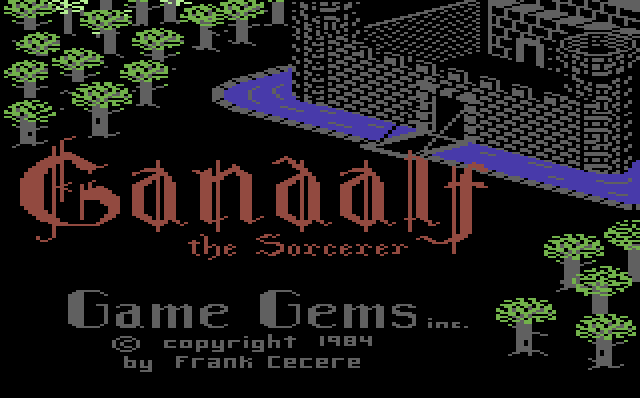 With a title like that, I think it's safe to say this one's about wizards. 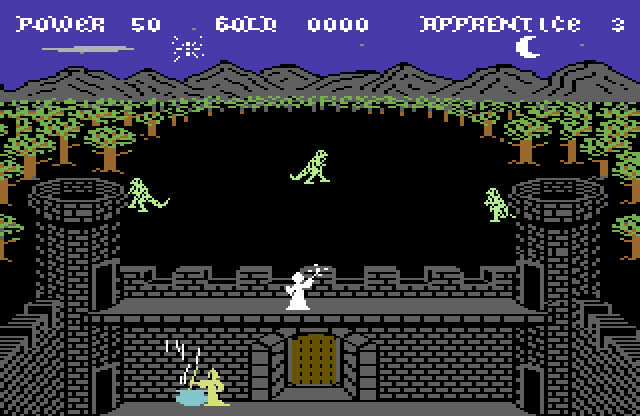 The wizard in question is Gandalf. I'm going to assume it's the Gandalf, because a lot of what goes on in this game is more enjoyable if I imagine Ian McKellen's doing it with his usual avuncular twinkle. After destroying Sauron and giving the hobbits a lift home on his magic horse - I'm not 100 percent on what happens in Lord of the Rings, I'm not a fan - Gandalf has bought himself a nice castle in the woods. That's Gandalf in the middle of the screen, the white lump standing on the battlements and surveying his front lawn. Gandalf's front lawn is infested with Tyrannosaurus Rexes. I really do hope that sentence has never been typed before, but part of me knows that there's almost certainly Lord of the Rings / Jurassic Park crossover fanfiction out there, and a smaller, more terrified part of me knows it's probably sexy fanfiction. 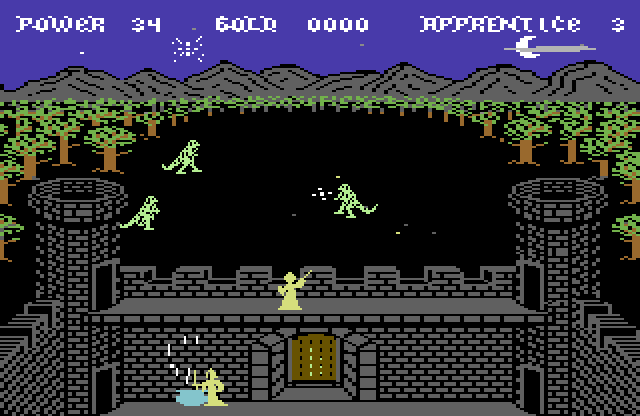 The instructions say they're dragons when they're quite clearly T. Rexes, but it doesn't matter either way because Gandalf can't be doing with them roaming around near his house. They keep trying to open the gate and abduct his apprentice, the figure on the bottom-left stirring the cauldron, for starters. So, Gandalf uses his magic to destroy the dinosaurs, a task that takes the form of a crosshair shooter. Drag your cursor over a dinosaur and press fire to blow it up with a small nuclear explosion, a description that I hope has made at least one of you run out and make an appointment at a place that airbrushes things onto the sides of vans.
The dragon-shooting works okay. The crosshair is dragged back down towards Gandalf when you let go of the joystick, which is annoying, but it's tempered by your magic's lock-on abilities - each magical bolt is like a goddamn Sidewinder missile, and once you have managed to wrangle your crosshair over a target that target is toast. 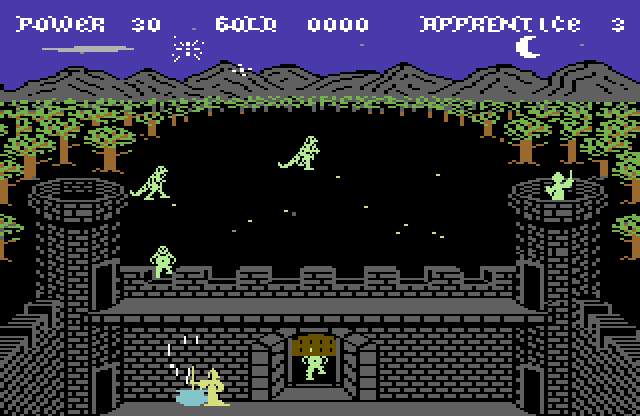 What else is there to do? Well, magical energy doesn't grow on trees, you know. It comes from the sky instead. When a sustained bout of dragon-zapping, or a collision with the spider that sometimes scuttles around the battlements, has drained his sorcerous essence, you have to take Gandalf to the top of the tower where fresh MP streaks from the sky and into his wand. So magic is like lightning, and my wand is actually a lightning rod, then? 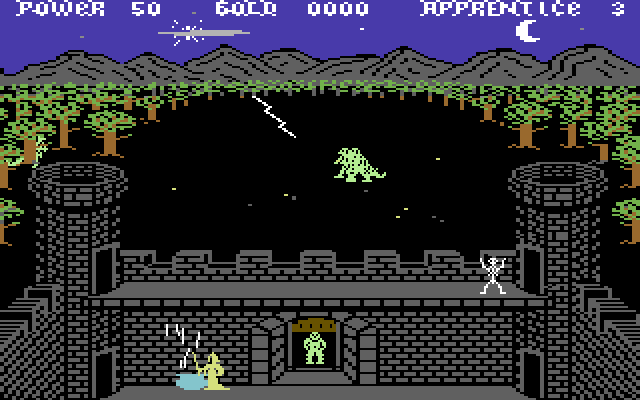 Yes, your wand is very much like a lightning rod. Here it has been hit by lightning, turning Gandalf into a skeleton. He's filled with the wisdom of the ages, but not the wisdom to avoid climbing up to the highest nearby place and pointing a stick towards a stormy sky. 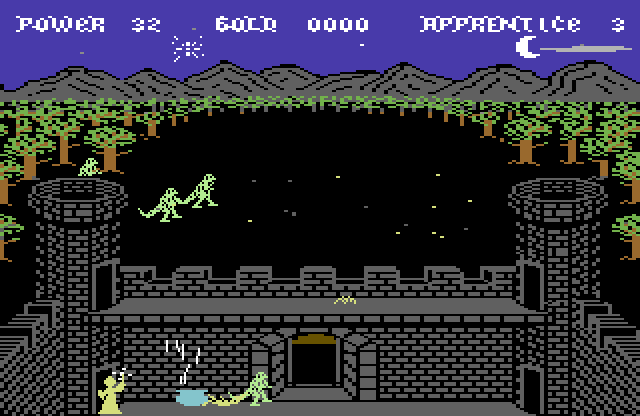 The gameplay continues in this vein for a while, the simple task of detonating dinosaurs being enjoyably complicated by the need to duck into the towers to avoid the roaming energy-draining spiders and to restore potency to your magic wand, as it were. However, no matter how much of a marksman you are the dragons will inevitably manage to open the gate and storm your castle, and once they do they drag your poor apprentice away. These dragonosauruses have yet to evolve manners and they leave the gate open on their way out, but that's for the best because it means you can move onto phase two of Gandalf the Sorcerer - heading into the lands beyond your castle. 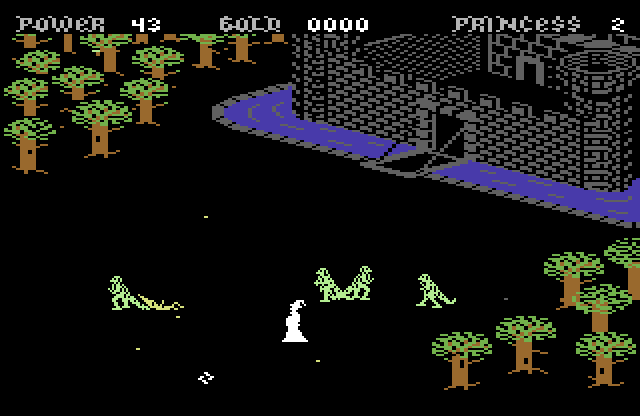 There goes your apprentice, dragged into the woods by a Godzilla wannabe for who knows what nefarious purpose. Maybe the dragons have a cauldron that needs stirring, too. Naturally you assume that Gandalf has braved this gauntlet of fearsome beasts in order to rescue his young charge, but you're forgetting our hero's two most famous character traits: his complete contempt for the lives of those around him and his insatiable greed.
You see, Gandalf's magic spell doesn't just destroy dragons - it turns them into gold. That's what the dots are on the ground, small piles of gold that you can collect by walking over them. The "Dragons to Gold" spell seems like an awfully specific one, so specific that you have to wonder how it came to be discovered. My guess is that Gandalf was working on the old lead into gold bit, his incantation went awry - perhaps thanks to a senior moment he shouted "dinodragonsaurus!" instead of "lead!" - and a nearby lizard was transmuted into ten Middle-Earth Bucks worth of bullion. "Close enough," thinks Gandalf, and thus the scene is set for this game. 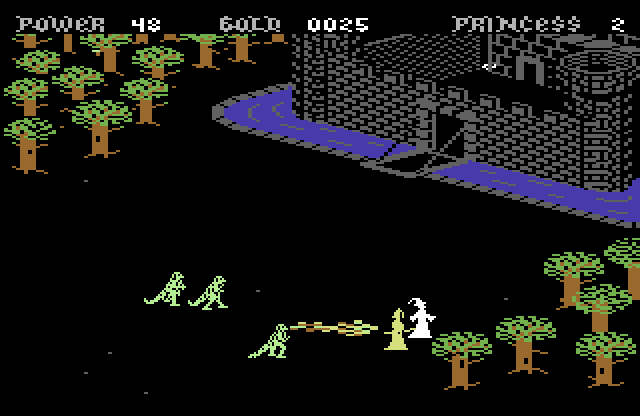 Accumulating gold is the real aim of the Gandalf the Sorcerer. Collecting a certain amount allows you to move onto the next scene, and so choices have to be made. Do you face death by attempting to rescue your apprentice, a risky proposition thanks to their distance from the castle's gate and the dragon's instantly-fatal fire-breath, or do you grab as much gold as you safely can before returning to the castle, stuffing your ears with coins in the vain hopes that they'll block out the distant screaming of your former pupil but they don't, nothing can stop the tortured moans from ringing in your head? 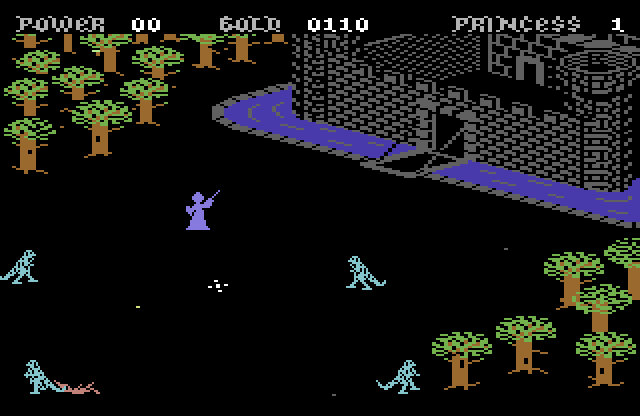 I mostly went for the coins. It was a decision born more from a desire to stay alive than to get rich, because freeing your apprentice isn't easy: the dragons move quite quickly and your magic spell has changed from being a long-distance bolt of sparkly death into a hex that creates a  landmine wherever your cursor is. You can only have one mine placed at a time, too, leaving you completely defenceless as you wait for the dragon carrying your student to step on your magical IED. If you misplace your mine, an easy thing to do when the cursor is being gravitationally dragged back towards Gandalf the whole time you're controlling it, give up on your apprentice and get back to the castle as fast as your skinny wizard legs will carry you. 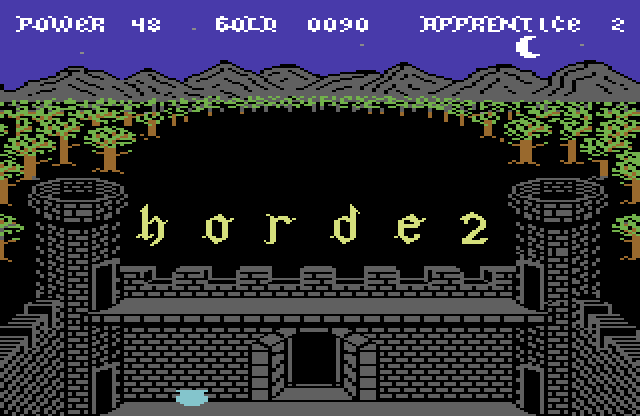 Secure enough wealth and the game moves on to the next horde, where the Tyrannosauruses are faster and a different colour. Sometimes an ostrich runs across the screen. I think it was an ostrich, anyway: it moves at a speed that makes Sonic the Hedgehog look like a fat kid on a treadmill, so I couldn't really see it, let alone get a screenshot.
Nothing much changes in the world of Gandalf the Sorcerer, aside from the dinosaurs gradually getting harder to hit until by round six they might as well not be there for all the luck I had trying to blow them up. I didn't get to the ending of this one... except I did, because I looked it up and the game just stops when you clear horde six. I'm glad about that. It means I don't feel so bad about not trying harder to complete it. 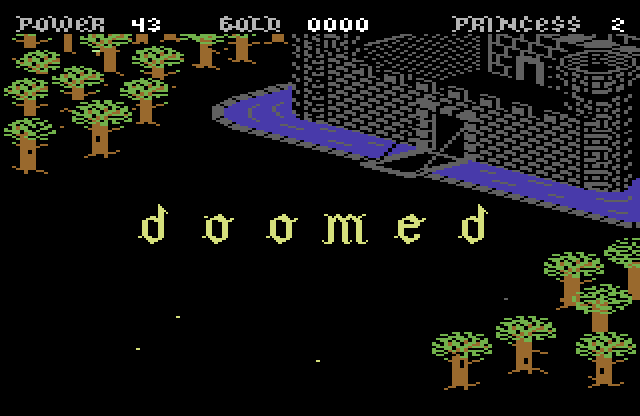 I was pleasantly surprised by how much enjoyment I got out of Gandalf the Sorcerer. It wasn't a huge amount - it is still just a two-screen C64 crosshair shooter, when you get down to it - but while it lasts it's a fun little timewaster with a charming sense of immorality to it. The only major problem with it is the crosshair being sucked back towards you, a strange decision that makes it feel as though Gandalf's arms are just really, really tired. I supposed they could be. He's an old man, after all. The graphics aren't great but they're clear and easily distinguishable (beside the blink-and-you'll-miss-it rocket-ostrich) and the in-game tune is just bouncy enough to be engaging with making you want to tape cushions over your ears. 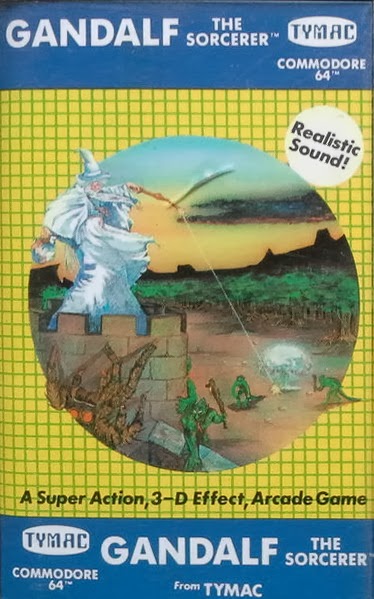 Before I leave the Commodore version behind, I just want to mention my favourite thing about the cover art, and that's the promise of "realistic sound". The realistic sound of what, precisely? Dragons being turned into gold? The only sound in this game you could make a case for as being "natural" is the sound of the thunderstrikes, but it sure as hell doesn't sound realistic. It sounds like a thunder sound effect produced by a Commodore 64, or a robot's flatulence. 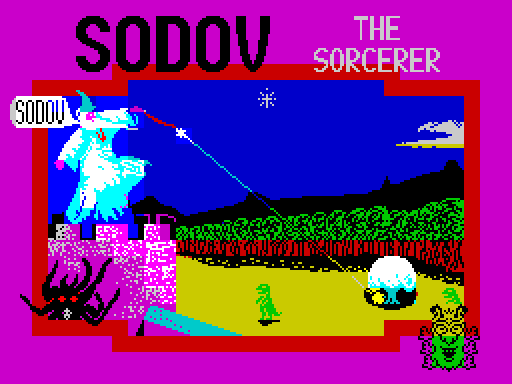 In 1986, Bug-Byte Software converted Gandalf the Sorcerer to the ZX Spectrum. They also changed the name to Sodov the Sorcerer. Because it sounds like "sod off," you see. Okay, so, the image of a wizard standing the parapets of his castle and shouting "SOD OFF!" at a dragon so hard it explodes got a chuckle from me. I'm assuming the name change was down to legal issues with the Tolkien estate, who I can't imagine would've been happy with one of old JRR's most famous characters being portrayed as a greedy psychopath with no regard for those who die thanks to his lust for gold. 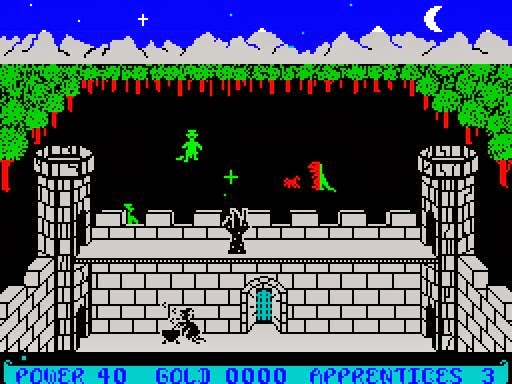 The Spectrum version plays almost identically to the Commodore version, as you would expect, although to me it felt noticeably inferior. The collisions aren't handled as well, I spontaneously died a couple of times with seeing what dealt the fatal blow and worst of all I couldn't get the joystick to work and was therefore stuck with the insufferable keyboard control method of using Q and A to go up and down, O and P for left and right and any button on the bottom row for fire. Try getting your hands into a comfortable position for that one. 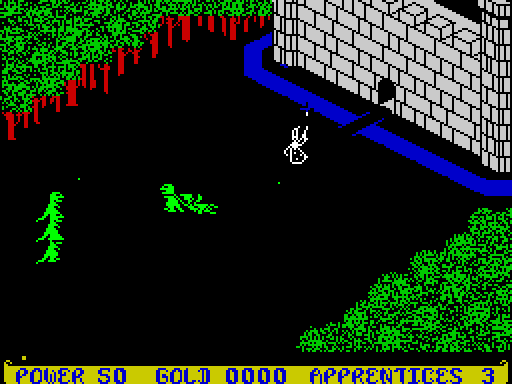 There are a few extra graphical details that I enjoyed in this version. The dragons look more like dinosaurs than ever, although I'll admit my appreciation of that is down to personal preference. Sodov's newly star-spangled robe looks good, and your apprentices get a little "HELP!" speech bubble when they're being carried away, but it's not enough to recommend it over the Commodore original, so if you are going to play Gandalf the Sorcerer - and I can think of a lot worse home computer games from 1984 - that's the version to go for. Just remember that lightning can strike the same place twice, that spiders will drain your magical mojo and that greed, even in Middle-Earth, is good.


Recently on VGJUNK:
Be the punk who saves New York in Crude Buster!
Drive a car into an unlicensed cartoon hero in Banishing Racer!
Five pieces of Final Fantasy VI Ephemera
Posted by VGJUNK