Previously: Parts 1, 2, 3.
Has it really been well over a year since the last time I delved into the world of fake NES games based on movies and TV shows? Maybe I've been subconsciously avoiding licensed games after playing Wayne's World. That kind of experience leaves a mark, you know? In the interests of healing and catharsis, then - here are some more NES games that don't exist, based on franchises that were (for the most part) never shoddily converted into a half-arsed side-scrolling action game by a company like Tose. 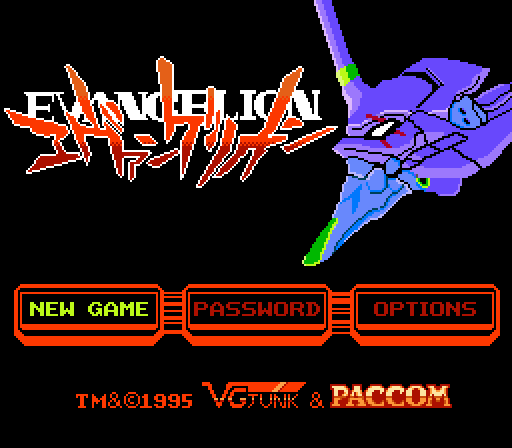 Here's one I actually made a while ago, based on everyone's favourite giant robot / deep questions about the nature of humanity / overpriced merchandise geyser anime Neon Genesis Evangelion. There have been plenty of Evangelion videogames, although surprisingly few focus on the very videogame-y concept of giant robots punching space monsters. Instead you get lots of pachinko games, and a dating sim set in an alternate universe because sure, why not? Maybe that's what this NES Evangelion game could be. Except I've put a robot on the title screen. Hmm... no, I've decided, it's definitely a dating sim. A dating sim about giant robots. The biomechanical guardians of mankind infused with the souls of their pilot's dead mothers need love too.

Teen angst-haver and role model to many of the MTV generation's less sociable members, Daria strikes me as having even less material suitable to being shaped into a videogame than most of the franchise featured in these articles. Can a videogame teach you valuable life lessons, like that sticking to a strict moral code will often make others dislike you or that pizza is a balm for all human ills? Maybe, if you built it around a choose-your-own-adventure style of gameplay. This being Daria, however, all responses would just be sarcastic put-downs. "Turn to page 61 to insinuate that a schoolmate is an idiot," but, you know, a NES cart instead of a book.

The Silence of the Lambs 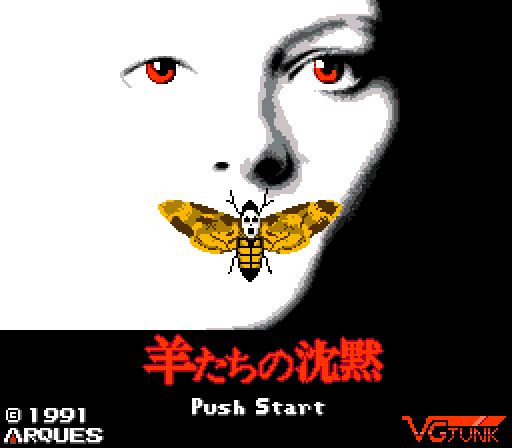 Of course, the real question here is would a Silence of the Lambs game have you playing as Clarice Starling or Hannibal Lecter? If only there had been a NES game based on the movie - I'd have loved to have seen someone attempt to justify a game where you play as a cannibalistic serial killer against Nintendo's content guidelines. No, Clarice would have been the more likely playable character, and I can imagine a games developer completely missing the point and turning The Silence of the Lambs into an action game. Clarice jumps from platform to platform, collecting lambs for points and avoiding the deadly moths and falling bottles of lotion until you reach the final confrontation with giant Jame Gumb who fires sewing needles out of his eyes.

You might be thinking "that fake Twin Peaks title screen sure does remind me of Super Mario Bros. 3," and that's hardly surprising considering I "borrowed" the curtains from Nintendo's platforming masterpiece. It's more than that, though, and if you look at the SMB3 title screen you might notice that it does actually bear some resemblance to Twin Peaks' Red Room - the black-and-white patterned floor, the red drapes, the two Italian men kicking a turtle shell about. Go on, admit it, you had to think for a second about whether or not that was actually in Twin Peaks, didn't you?
What kind of game would a NES adaptation of Twin Peaks be? Well, I have to imagine it'd be some kind of graphic adventure, probably in the vein of ICOM's Deja Vu but with more coffee, and I think there's a chance that it could have made for a surprisingly good NES title. 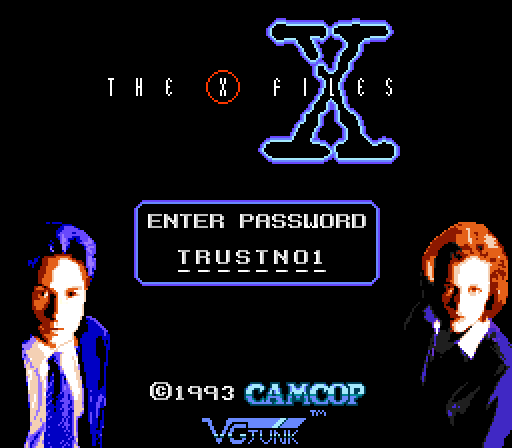 From one mysterious tale of FBI agents and spooky goings-on to another, and a chance to admit just how much I love The X-Files. A lot, that's how much. One of the most significant formative influences of my youth, frankly. A slightly depressing thought, that, so I'll just stick to saying that I really love The X-Files.
Like Twin Peaks, this would surely have to be another graphic adventure, with the point-and-click interface allowing Mulder and Scully to solve all manner of bizarre incidents while an on-screen meter records the level of sexual tension in the air. You could have two playable characters, with each agent having their own unique abilities - Mulder can get away with breaching FBI protocol simply by shouting at his superiors, while Scully has a button solely dedicated to rolling her eyes. I really want this one to be a real game, but for the sake of my fragile heart it's probably for the best that it's not. Again, I can still remember that Wayne's World game. 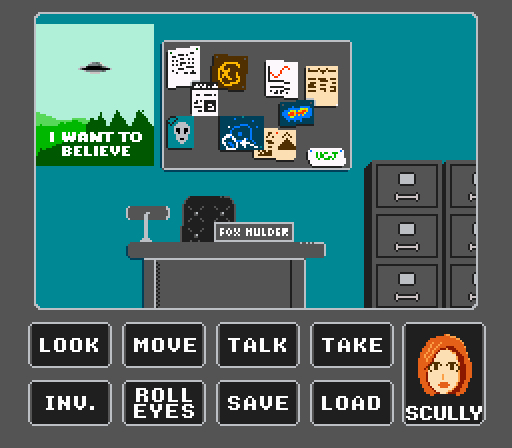 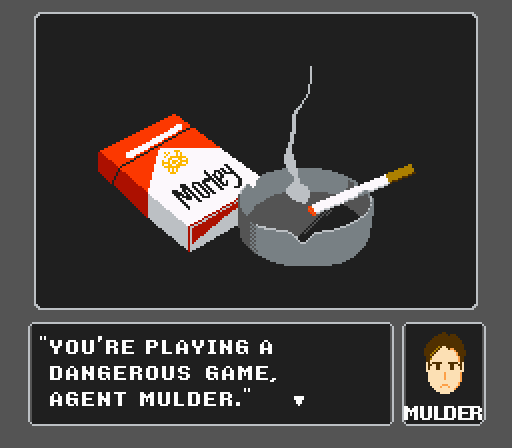 I knocked up some screenshots for a NES X-Files point-and-click adventure, because I keep thinking about what one would look like. Probably not exactly like this - I think it might be a little too colourful for actual NES hardware to output - but probably not too far away.

Alien is my favourite movie ever made, and as such I was bound to get to it eventually if I kept making these fake NES title screen. The problem was, how could I make it interesting? What could I do to capture it's essence in 8-bit form? Then it occurred to me I could just recreate the fading letters of the movie's titles, and honestly I think it came out looking the best of the lot. It certainly looks the most like a real game, possibly a proto-Survival-Horror in the manner of Capcom's Sweet Home, or even a claustrophobic stealth game where your goal is to sneak around collecting provisions for the escape shuttle. There's a mission towards the end where you have to find the ship's cat, and if you enter the escape shuttle without finding the cat you get a bad ending. Not as bad as being eaten / impregnated by a space monster, but one that leaves you with a subtle feeling of guilt and the gnawing sense that in your rush to survive you have cast aside your humanity. That's Alien: The Videogame, definitely not coming soon to a NES near you.