In the dim and distant days before the internet found its way into every home, when a person got stuck in a videogame they had three options: either look for a solution in videogame magazine, call a tips helpline or buy a strategy guide. Oh, right, I suppose they could have asked their friends, too. I wonder why I didn't think of that? Anyway, strategy guides were big rectangular things made of paper, filled with maps and puzzle solutions and, if you were lucky, some nice artwork, sitting open in your lap while you... what do you mean, they're still making physical guide books? Don't these people know about GameFAQS, or the fact that every game has its own bloody Wiki now? Unbelievable.
Strategy guides, then. Some were official. Some were... less official. Unauthorized, even, free to explore a game's mysteries without the nagging presence of the developers hanging over them. Of course, being unofficial meant these guides couldn't use official artwork for their covers. They had to produce their own alternate, non-copyright-infringing cover art. Can you see where I'm going with this? That's right, here are some unofficial strategy guide covers and boy howdy are they a mess. 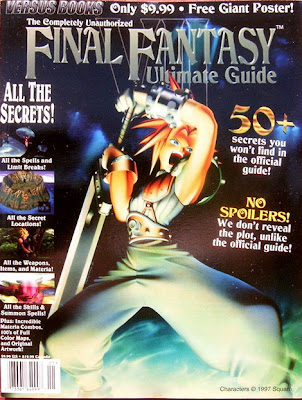 Just to show that not all unofficial guides had terrible covers, here's Versus Book's Final Fantasy VII guide. They drew their own picture of Cloud and yeah, it's pretty decent. Not sure I would have gone with a pose that draws quite so much of your focus directly into Cloud's crotch, but on the whole a good effort. Plus it's nice to see a dynamic, forceful Cloud rather than him looking like a a member of an anime boy band who's just had his lunch money stolen. 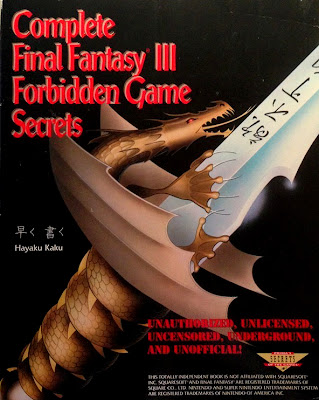 Sticking with the Final Fantasy series, and you know what gives a dragon that look of noble ferocity? Frog feet. Maybe they're like gecko toes, an evolutionary advantage that helps this species fill a niche in the ecosystem by clinging onto swords and subsisting on the blood / mana / demonic life essence that drips down the blade as the wielder slices his way to victory. D&D quest writers, you can have that one for free.
The dragon's not that interesting, though - I'm more taken with this guide's full title. "Forbidden Game Secrets," huh? I know you have to hype your guide to the casual customer and that dragon's sure as hell not going to do it, but intimating that your book will reveal secrets about Final Fantasy III so earth-shatteringly revelatory that they are forbidden is going a bit far. The terrible knowledge that mankind must not possess - how to resurrect General Leo.
Finally, the author's name is apparently Hayaku Kaku. I've seen enough anime to know that "hayaku" means "quickly" or "hurry" in Japanese. In fact, "hayaku kaku" translates as something like "I write fast." I wonder if there are any Japanese guides out there written by Mr. I Knocked This Out In My Lunch Hour. 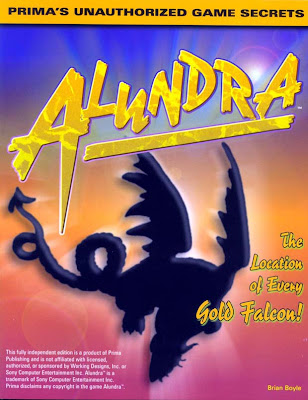 Most of the time, this is what you'll get on the cover of an unofficial guide - Microsoft Word text effects and sub-clip-art levels of design. This dragon gets off lightly by remaining in shadow, although I'm not sure that is a dragon. I think it's a garden hose lying next to pigeon that's been hit by a truck. 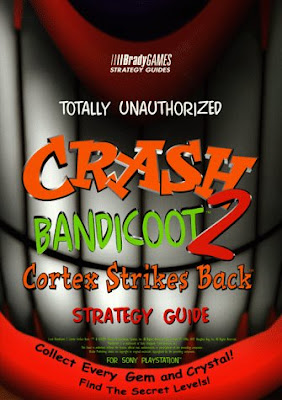 Or, Crash Bandicoot Will Devour Your Soul. I know those red bits in the top corners are supposed to be Crash's gums, but I can't see them as anything other than rivulets of blood running down his (admittedly well cared-for) teeth. Couldn't BradyGames have drawn a generic crate or a tiki mask or something, instead of this close-up of Julia Roberts? 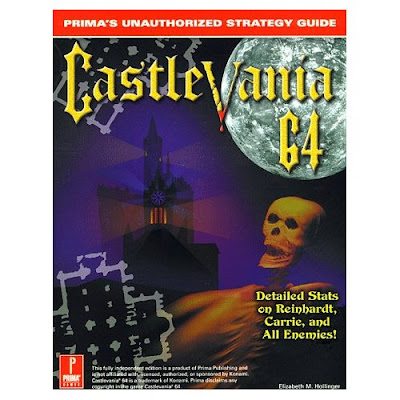 Desperate for a new source of income to help sustain his gargantuan candle replacement costs, Dracula allows Castlevania to be sublet as a lighthouse. The neighbours aren't happy about it, but what are they going to do? Storm his castle with pitchforks and burning torches?
That skull's the real star here. Apparently the work experience boy at Prima couldn't scrounge up a photograph of a real skull, so he found a Hallowe'en decoration and used that instead. You can see the seam across the side of the skull and everything. Some cruel people might say that this is exactly the kind of terrible artwork that Castlevania 64 deserves to be associated with, but I think that's a bit harsh. Castlevania: Judgment, on the other hand... 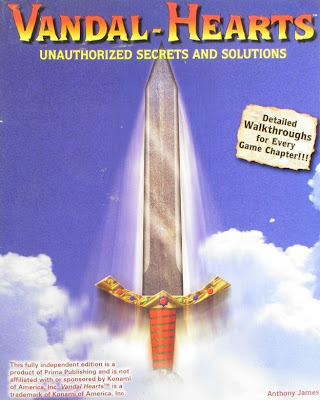 I get why it's a sword - Vandal Hearts is a fantasy RPG, after all - but what I don't understand is why the sword is blasting into the heavens like a bloody Soyuz rocket. Maybe there's a sword-throwing mini-game that the artist was especially enamoured with. All I know is that the artist has decorated that sword's hilt with Smarties, and now I want Smarties. 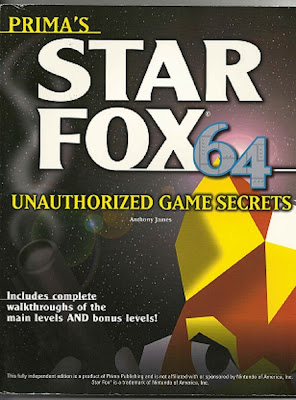 "Jenkins, did you finish the cover for that StarFox 64 guide yet?"
"No, sir. I'm having trouble. You know, because we can't use any pictures from the game."
"Can't you just be subtle about it? Show a little, but not enough to get sued?"
"I don't follow, sir."
"Have that Star McFox guy on the front, but make it so he's just peeking in from the corner, whack some shadows around him, job done."
"His gun's still a bit obvious, sir."
"Well then change it into a drainpipe or something, for christ's sake. You're bloody useless, Jenkins. I never would have hired you if your father wasn't blackmailing me with that footage from the zoo's security cameras." 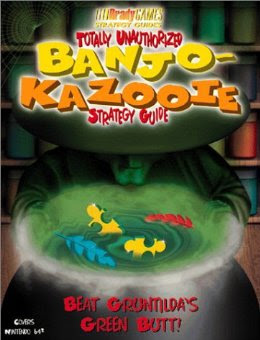 It's a witch looking into a cauldron. I can see that now. I didn't originally. At first glance, I thought it was a picture of an overflowing toilet with... things floating in it. I'm sure I'm not the only one to have experienced this unfortunate optical illusion.

Or to give the game its full title, Super Mario 64 Starring Tweetie Pie. 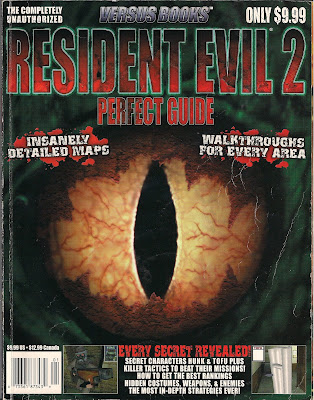 Not too bad, this one. You can't really go wrong with a giant eyeball if you're looking for something Resident Evil themed, easy to draw and copyright-free.
I'm more interesting in the quality of the maps in this guide, though. What exactly constitutes an insanely detailed map? How is it different from a normal map? Is it remorselessly precise, with distances measured to the nearest micron, the location of each and every item marked with pin-point precision? Is it on a 1:1 scale, one enormous sheet of paper that folds out to be the size of a police station? Maybe these insane maps are written on human skin and inked in blood, their margins filled with the mad ramblings of their creators, a psychotic episode represented by a piece of fictional cartography. 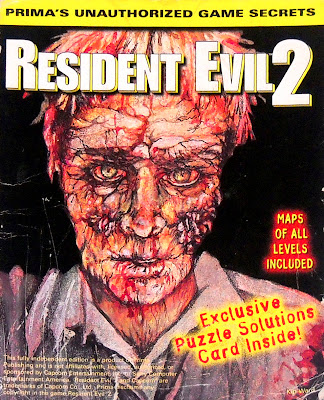 Or you could just slap a drawing of a zombie done in pencil crayons on the front. Nothing says professionalism like pencil crayons. This zombie has a strange look on his face, a mixture of sadness and frustration. I assume this is because that's how the model for this picture felt.
No, wait, I've figured it out - this artwork is actually based on the early beta versions of Resident Evil 2. You know, the ones where the G-Virus didn't zombify people but instead turned them into Rod Stewart. That was a very different game, let me tell you. 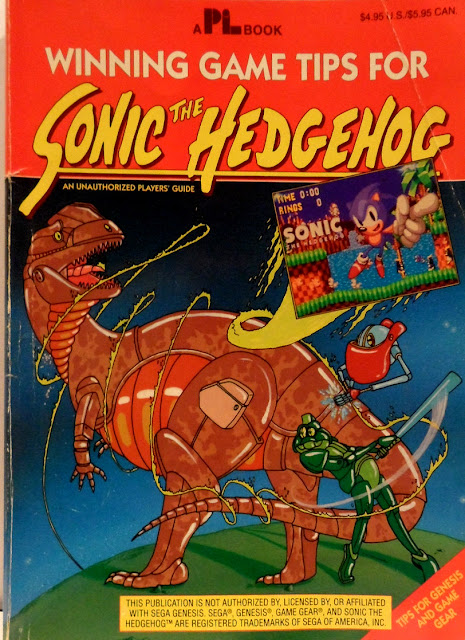 Finally for today - this thing. Apparently it's about Sonic the Hedgehog, and thankfully someone remembered that just in time to slap a screenshot on the front. They might as well have not bothered, because it's going to take a lot more than that to distract any potential customer from this guide's main illustration. I'm going to describe said illustration in full - not because I think you're blind or not paying attention properly, but because I'm not sure I'll believe it exists until I see it written down in black and white.
Here stands a mechanical T. Rex, and the T. Rex looks worried. His nervousness is justified, because a robot man-frog is wildly swinging a baseball bat near his hindquarters while a small hovering machine with prehensile hands massages his tail. As this bizarre vignette unfolds, a stream of electric piss whirls around his body. The dinosaur wonders why he bothered getting out of bed this morning. The Sonic the Hedgehog screenshot is ignored. The electric piss finds its way through the T. Rex's joints, shorting out his circuits. His vision grows dim. Everything comes to an end. Only darkness remains. To unlock the secret level select option, press Up, Down, Left, Right, then hold A and press Start!

You don't say.
Normally I'd feel a bit bad for mocking these terrible, terrible covers, given that I have so little artistic talent that even Bob Ross would lose his rag with me, but then I take another look at that Crash Bandicoot one and I feel less of a dick. The rallying cry of deluded idiots rises in my throat, but for once I think "I could do better than that" is a truthful statement. We could all do better than that. In fact, if you want to have a go at creating your own non-official covers for these guides then send 'em to vgjunk@hotmail.co.uk and if I get enough of them I might make a gallery or something. I know it'll be difficult, but try to resist the temptation to put robot dinosaurs in all of them.