There are some games I'll probably never get around to writing about in full, for a variety of reasons - they might be too modern, or too thoroughly dissected already, or simply just not very interesting. Halo, for instance, would meet all three of those criteria. There are still nuggets of entertainment to be mined from this vast slag heap of gaming, however, and in the first of what may well end up being a semi-regular series I present to you five little pieces of videogame ephemera, brief moments that might otherwise be lost down the back of the metaphorical sofa of gaming forevermore.

James Bond 007: The Duel was a Rolling Thunder clone from 1993 that appeared on Sega consoles and starred everyone's favourite innuendo-spouting super spy, as played by Timothy Dalton. It's a forgettable game, or at least it would be if the Megadrive version's title screen wasn't permanently wedged in one of my squishier cranial folds. 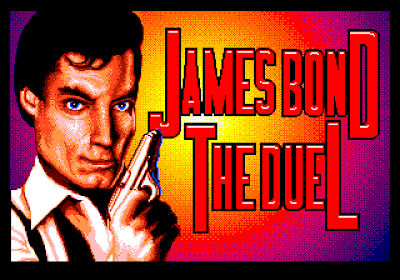 Now, I'm not a Bond fan in the slightest but you don't live in Britain for nearly thirty years without absorbing a lot of 007 knowledge through cultural osmosis, and as such I feel confident in saying that Timothy Dalton's head isn't twice the size of a normal adult male's. Maybe his tiny gun is throwing the perspective off, maybe it's his piercing blue eyes drawing me in, but I chuckle every time I see his vast noggin.
And before you blame the game's artists, this is the cover photograph: 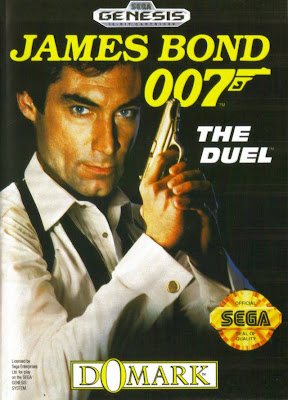 If anything, I'd say they've toned his head size down for the title screen. You know, I have the sneaking suspicion that this image may be a composite of two separate photos. I'd say we should get Bond to investigate this skulduggery, but he's got his head stuck in the submarine's escape hatch again.

Just Cause 2 might be my favourite sandbox game ever, because I am a colossal man-child who never gets tired of huge explosions, jumping from helicopter to helicopter and tying the elite military commandos of a brutal dictatorship to gas canisters and then sending them careening into the bright blue skies of Panau. Seriously, it's great and you can pick it up dirt cheap. so, you know, do that.
This article is about little things, though, and one thing about Just Cause 2 that always puts me in a good mood is calling up your weapons merchant / vehicle dealer / helicopter taxi service. He's (briefly) called the Sloth Demon, and his musical theme sounds like this.

At the forty-second mark, it turns into a bouncy redneck hoedown, which admittedly has it's own charm, but it's the bit before that I'm interested in - the slide guitar, the faux-rattlesnake noise, it sounds like it belongs to a movie about a secret agent infiltrating the Old West and I absolutely love it.

Remember Soul Calibur II? That was the one where you could play as Heihachi from Tekken in the PS2 edition, or Link in the Gamecube version, or if you were really unlucky and had an XBox you got Spawn. Still, Spawn's better than the godawful Necrid. Anyway, Soul Calibur II was fun and got played a lot when I was at university, but after a while you might get tired of the same old hit-'em-with-a-sword combat. Well, here's a way to spruce the game up in versus mode.
Step one is to go into the options and set the health bars to infinite. This means that the only way to win is to knock your opponent off the the stage and score a Ring Out. Now start a versus game, and choose Charade as your fighter. 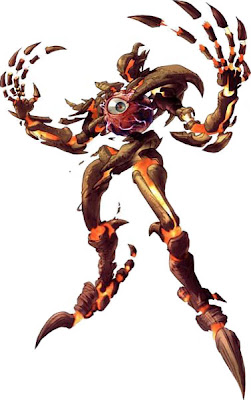 This isn't out of any love for the character of Charade, who is nothing more than a way of randomly selecting a character due to his gimmick being that he switches to a random character's fighting style at the start of each round. This helps head off any arguments about fairness, as all is decided by the unknowable whims of Charade.
The final step - and this is the most important one - is to make sure you choose to fight on the Ice version of the Crypt stage. 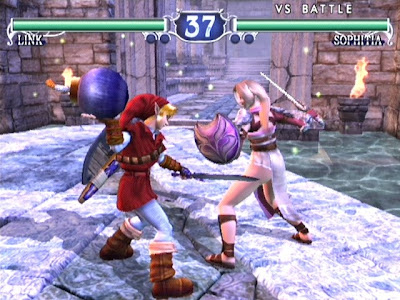 Congratulations, you now have a battle between two random fighters where only Ring Outs count, and it takes place on an extremely slippery surface with no walls. It's sumo wrestling on an ice rink, It's A Knockout meets the Winter Olympics, and it's bloody hilarious, especially when both players end up being big, beefy characters like Astaroth and subsequently spend the entire match trying to land huge hits, only to miss and see themselves slide off the stage and to their doom, their momentum condemning them to a frosty death. Charade on Ice, folks - try it, won't you?

I'm sure you're all aware that if you jump into the doors to the boss rooms in the NES Mega Man games, Megaman will hover and slide into the room as the screen pans across, like so.

Far be it from me to tell you how you should be enjoying your digital entertainment media, but if you don't make Megaman jump and float as though he's sliding along the ceiling into every single boss room, you're playing the game wrong.
An interesting quirk, but what about Megaman's head falling off every time he reaches the top of a ladder?

Obviously, his head doesn't actually disappear - this is just an extra frame showing the Blue Bomber hauling himself over the top of the ladder. I wish I could go back in time and tell my younger self this, because when I was a kid it never registered that this was intentional. It didn't click until embarrassingly late in my life that yes, it's supposed to look like that. Capcom knew what they were doing. It's a nice bit of animation. I've come to accept that now, along with the folly of my youth.

Amongst the many and varied enemies in Castlevania: Symphony of the Night are the Skelerangs. They are skeletons with boomerangs, because Dracula is too busy rising from the grave every five minutes to come up with original names for all his minions. See also: Bloody Zombies, Dark Octopus.

So, the long-dead bones of an Australian are resurrected and transported to Dracula's castle, where they do what they did best in life: hang around on ledges and throw boomerangs at anything that wanders by. Unfortunately that is all they can do - they have no close range attacks and they can barely even move. They are not equipped to take on Alucard should he manage to avoid their boomerangs, and they know this. That's why if Alucard gets close but doesn't attack and instead stands over them, (presumably while employing some kind of menacing half-vampire stare,) they curl up into the foetal position and tremble in terror.

A rare feeling of power in a game where the foulest demons of hell (plus characters from The Wizard of Oz) are arrayed against you. A rare feeling until you get the Crissaegrim, at least. That thing turns Alucard into a nattily-dressed combine harvester.

There you go, then: five little things to put a smile on your face, a spring in your step or, in the case of Timothy Dalton's giant head, fill you with a creeping feeling that he's watching you while you sleep. Actually, I think that last one might just be me.


Recently on VGJUNK:
Retina-searing bafflement in Alice in Videoland!
Tekken 2 on the... NES?!
Waterskiing and not much else in Tropical Angel!
Posted by VGJUNK