It's time for something a little more wholesome than usual, something rather more family-friendly than the kind of games generally featured here at VGJunk, because even when you're doing something as innocent as delivering pizza you're still beating cats to death with a spade and forcing people's eyeballs out by jumping on their heads. With that in mind, here's Spinnaker Software's 1983 Commodore 64 book of nursery rhymes, Hey Diddle Diddle! 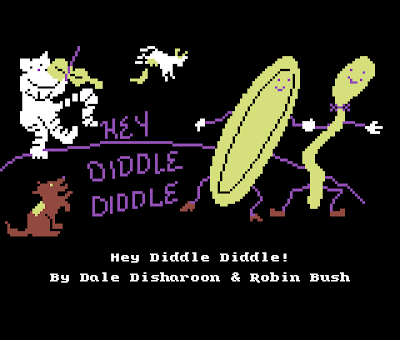 That's the title screen, and it captures the contents of the nursery rhyme "Hey Diddle Diddle" with rare efficiency. A dish and a spoon are eloping, a cow jumps over a banana, a cat plays a fiddle or possibly a very large peanut and a little dog laughs to see such fun, laughs long and deliriously at the insanity unfolding before his eyes. This screen also clears up a great mystery, and that's the genders of the dish and the spoon. The dish is wearing high heels and the spoon has a bow tie, so it was a male spoon who ran away with a female dish. I can't tell you how relieved I am to have that cleared up. 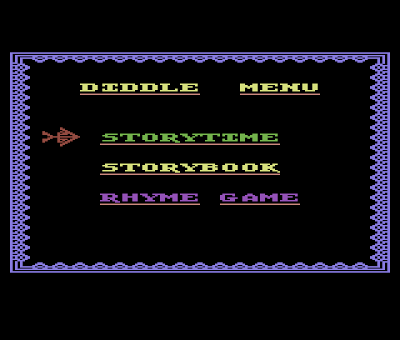 Hey Diddle Diddle isn't really anything more than an illustrated book of nursery rhymes for the Commodore 64, so if you had become bored by real books with actual pictures then you could fire this tape up and see these bedtime favourites brought to life in the kind of blocky, sixteen-coloured glory that cannot be replicated on the printed page. 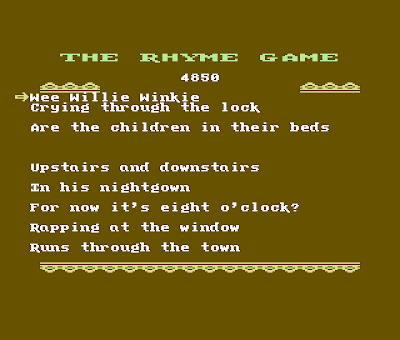 There is a tiny sliver of a "game" aspect to Hey Diddle Diddle, and that's "Rhyme Game" option . You're given the lines from a nursery rhyme jumbled out of order, and you have to sort them back into the correct order as fast as possible. The faster you reconstruct the rhyme, the more points you get and points are all you have to shoot for. 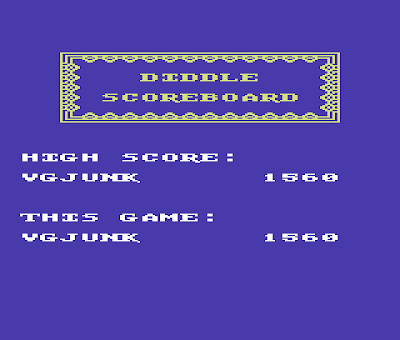 Given the recent wave of news stories concerning celebrity child abusers, I'm a little wary about having my name attached to something called the "Diddle Scoreboard".
Obviously, this incredibly simple sorting game isn't the reason I'm wasting so much time talking about Hey Diddle Diddle. No, I'm here to discuss the meat of the game, and that's the "Storybook" and "Storytime" modes. These modes just throw up rhyme after rhyme, complete with the finest artwork the Commodore 64 can muster. Wonderful, beautiful and only occasionally terrifying artwork that I'm going to share with you all. Some of these screenshots have been altered to include the full rhyme text, but I can assure you I haven't altered the artwork itself in any way. I could never improve on these things. 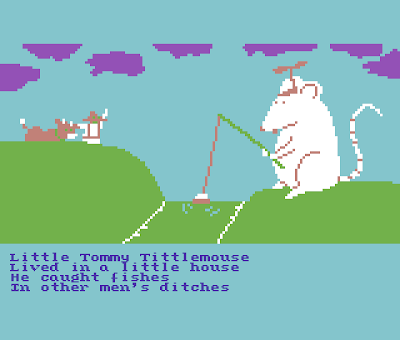 Rhyme number one and right out of the gate I'm confronted with a scene of maddening proportions and nonsensical content. A giant mouse in a propeller beanie fishes in a stream while Silent Hill's Pyramid Head and a cow look on. This giant mouse apparently "caught fishes in other men's ditches," which I think implies that he's cuckolded a lot of people. 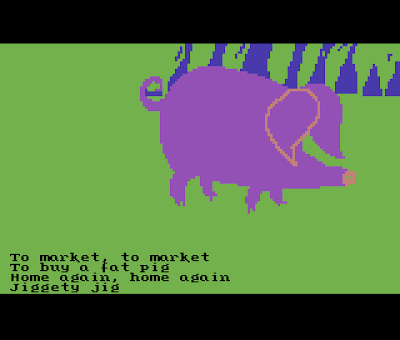 To market, to market, to buy a fat pig! But what do you want a fat pig for? Bacon? Ham? Temporary replacement sheepdog that defies all the odds and become a champion sheep herder? 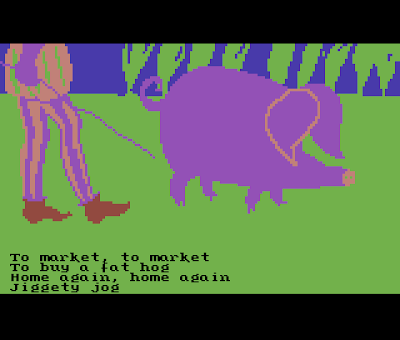 Oh, you wanted to piss on it. Well, fair enough, it's your money. 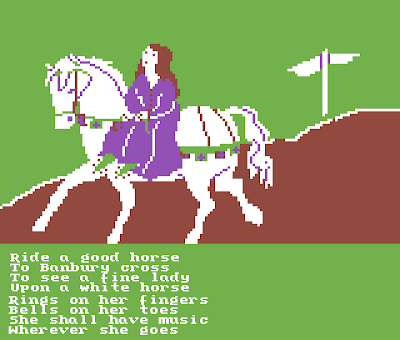 Shouldn't that be "ride a cock-horse to Banbury Cross"? I'm fairly certain those are the correct words, but there's no way I'm putting any combination of "cock" and "horse" into Google to find out.
Still, that's a good-looking horse. Tall, noble, majestic. Not sure I'd call the lady "fine," though. Not when she looks like an anaemic E.T. in a wig. 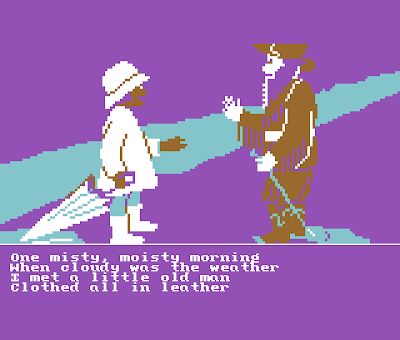 I met a man clothed all in leather once. His name was Randy, and we... well, I said I was going to keep this article wholesome so that story will have to remain untold. 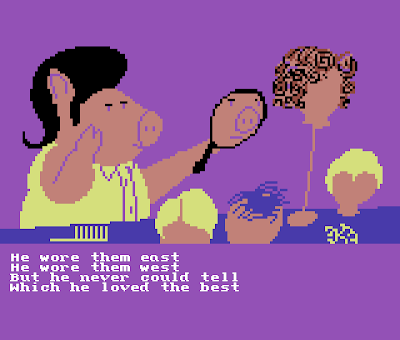 Don't get me wrong, the story of Gregory Griggs, a pig who had a large collection of wigs and hairpieces, is a compelling one indeed. Who wouldn't be enthralled by the tale of a pig who tries to better himself through toupees? That's not why I'm mentioning him, though. I'm mentioning because I can't help but read this part of his nursery rhyme to the tune of Little Richard's "Tutti Frutti." 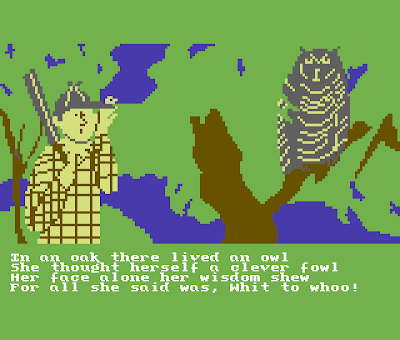 Sherlock Holmes and the Case of the Grey Lump that Clearly Isn't an Owl.
No, really, what is that thing? An enormous thumbprint that has somehow come to life and built a nest in a tree? An acorn gone horribly wrong? Sadly, I think what has actually happened here is that the hunter has been startled by a bin bag caught in the branches of a tree, and he's trying to save face by telling his fellow hunters that it was actually an enormous owl. 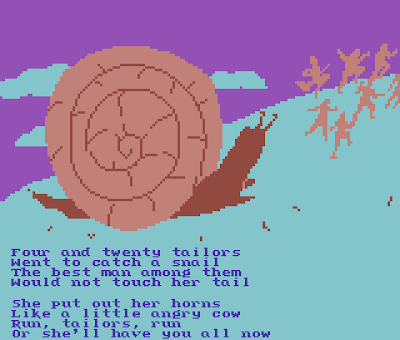 This is more like it! Kids don't want nursery rhymes about women on horses or cows jumping over celestial bodies, they want grotesque tales about gargantuan snails terrorising the local tailoring community, striking, well, not like lightning but with cruel intent, leaving a trail of fear and also mucus.
Not sure why the tailors were after Shellhamut, colossal lord of all snails, in the first place, mind you. Maybe they were French. You could feed a small village in Provence for a year on that thing. 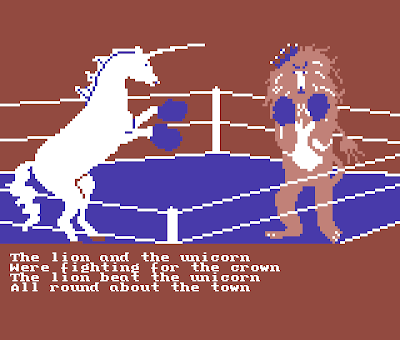 The lion and the unicorn in this nursery rhyme represent England and Scotland, respectively. No, really. My money's on the lion - he's keeping his guard up and looking for an opening, plus he seems much more comfortable on two legs than the unicorn, who is showing some very poor form. On closer inspection, I have come to the conclusion that this is actually a fight between a man in a lion costume and a horse with a bit of dowelling glued to its forehead. You'd think this would make the horse the clear favourite, but as kicking is against the Queensberry rules it will almost certainly be disqualified. 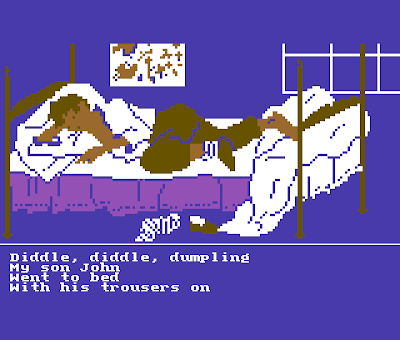 Diddle diddle dumpling, my son John, he's a slovenly little bastard with no pride in his appearance. Is he wearing a shoe in bed? What a swine. The maid works hard to clean his bedsheets, he could do a little more to help around the place rather than just lying in bed in a pose of idealised Byronic romanticism. He's probably got consumption too, the freeloader. 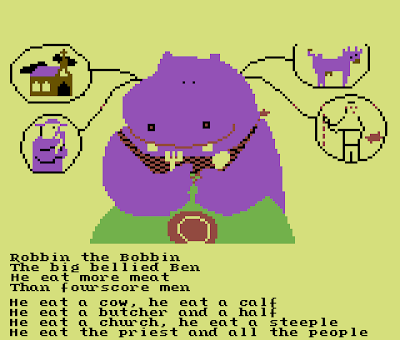 Don't worry - if you're having trouble getting your little ones out of bed, just sing them this little ditty about a terrifying beast with a relentless hunger to devour all before him and they'll never sleep again! Ha ha, he eats people, how charming! I know there's that old saying about hippos being the most dangerous wild animals in Africa, but I don't think that's because they burst into churches and chomp down the congregation.
My favourite detail is that Robbin the Bobbin ate a butcher and a half. A nice little flourish, that. Leaves the wee ones imagining a bloodied and chewed pair of legs laying on the floor, half covered by a tattered apron. Sweet dreams! 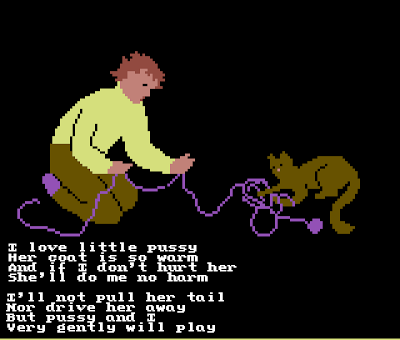 "I love little pussy," says the boy. He says he's going to play gently with that pussy. I know, I know. I'm thinking it, you're thinking it, we're all thinking it - that cat's head looks kinda like the Pokemon Diglett. 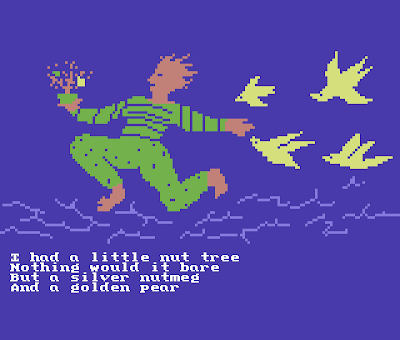 What the hell are you complaining about, you've got a tree that grows precious metals in the shape of fruit! Okay, so you're wearing some painfully unattractive pyjamas, and you've got a deformed foot, but that's no reason to be whining... oh, alright, and you're being made to run barefoot across broken glass, sure, that's not great but... and you're constantly being chased by a flock of vicious yellow birds, their pecking and squawking never allowing you a moments respite? Fair enough, you can complain all you like. 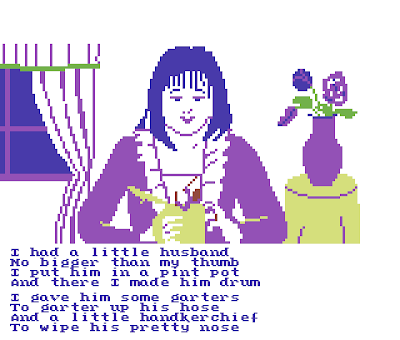 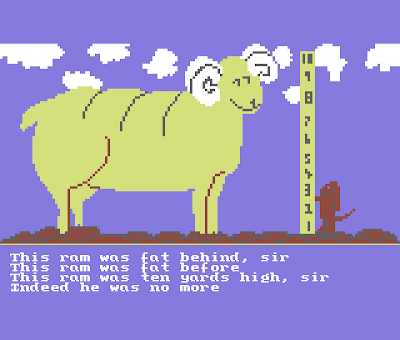 This ram has a fat behind. He's real smug about it, too. He's also thirty feet tall, so I guess he can get away with doing whatever the hell he wants. No-one can stand against his power, with the possible exception of Robbin the Bobbin. Robbin the Bobbin will eat your fat behind and still have room left over for a dessert of fifty schoolbuses. 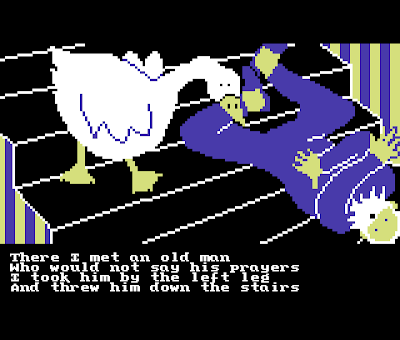 And finally for today, a goose throws an irreligious old man down the stairs. That is what's being described in the text, right? A goose decides that this poor old man lacks piety and the only way for him to feel the love and compassion of the Lord God is to hurl him down the stairs? And here I thought only God could judge, but it turns out geese can as well. Maybe that's why geese are such notorious bastards, they've been at the right hand of God too long and the power has gone to their beaky heads. 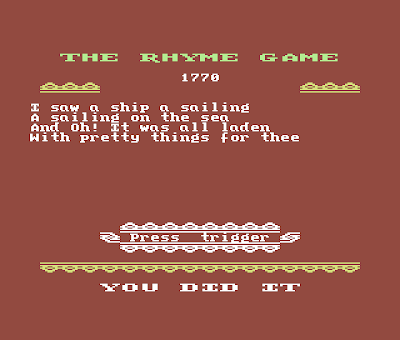 So that's Hey Diddle Diddle, and it is what it is. The artwork is rough even for the Commodore 64 and it only serves to highlight the bizarre and disturbing nature of many nursery rhymes, but I suppose it works as a kind of nursery rhyme library. I feel a little bad about mocking it, to be honest. The programmers probably just made it for their kids, I can't see there being a huge market for this kind of thing even in the early Eighties. Yeah, it probably a simple project born out of love for their children, and here I am to piss all over it thirty years later. I disgust myself. See you next time, and remember - say your prayers, lest a goose come into your room at night and fuck you up.

Recently on VGJUNK:
Bellhops and beatniks in Pizza Pop (also pizza)!
Uphold the law in RoboCop 2!
Quintessential (but not good) C64 platformer Tower of Terror!
Posted by VGJUNK