You know what I've been thinking about recently? I've been thinking about vampires beating each other up. What? Don't look at me like that, my carer says it's perfectly fine as long as I don't start renting eveningwear and slapping passers-by, and I've already promised the courts that I'll never do that again. Instead, here's a quick look at some vampiric characters from fighting games throughout the ages. Let's see 'em prosecute me for this. 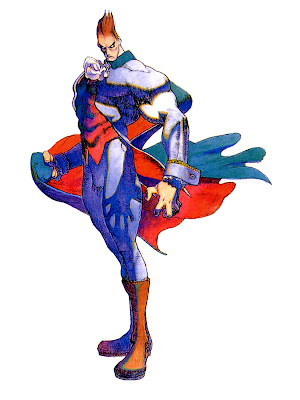 Where better to start than with the most Hallowe'eny fighting game series of them all, Capcom's Darkstalkers series? It gathers together each of the world's most famous monster types, from werewolves to Frankensteins to soulless bee-women who want to fill you full of their eggs, and then pits them against each other in hand-to-hand combat like a cross between Noah's Ark, a ghost train and the UFC. Representing the vampires is Demitri Maximoff, and he's got the full vampire works - aristocratic heritage, a castle in Eastern Europe, the confidence to wear formal attire at all times. Actually, let's take a closer look at what he's wearing: 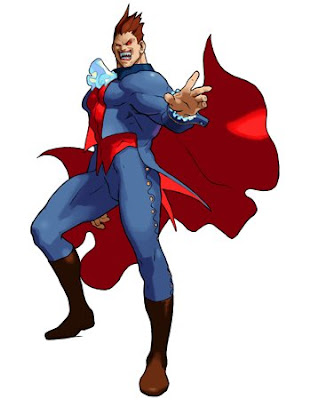 That's some kind of skin-tight tuxedo, isn't it? Get James Bond on the phone, he'd love one of these - he could scuba-dive into the enemy's base and attend the luxurious party thrown by the mysterious businessman, all without changing his outfit. Demitri strikes me as the vain type, though, so I'd wager he chose the figure-hugging spandex eveningwear because a regular tuxedo doesn't show off his sweet guns.
I'll tell you now that Demitri is going to be the most vampire-ish vampire on this list. I know that seems unlikely given that he's essentially wearing body paint and riding boots and his special moves consist of fireballs and turning his cape into a flying drill, but at least he can drink his opponent's blood. He does this via a move called Midnight Bliss, (anyone thinking of starting a Goth band: there's a free name for you,) and the most interesting thing about that move is that Demitri won't bite the necks of any old peon you put in front of him. Oh no, first he has to use his dark powers change them into something a little more appetizing. 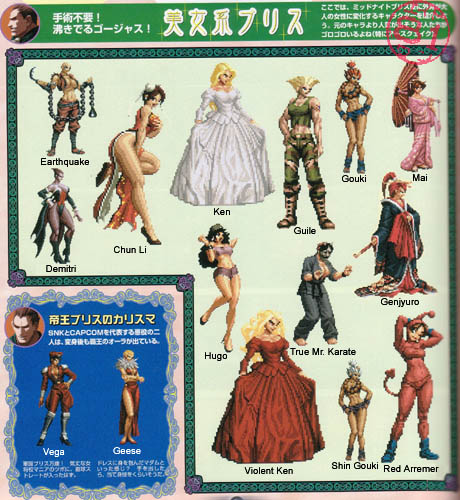 He turns them into girls, or more appealing girls if they're already female. These ones are from SNK vs. Capcom, and there are a couple of things I love about this. Firstly, Mai from King of Fighters is wearing a less revealing outfit than her usual one, which really says something about how she's normally portrayed (that is, like two water balloons hanging in a constantly jiggling sling). The other thing is that "sexy" Red Arremer at the bottom right. That one must have really tested the limits of Demitri's vampire powers. 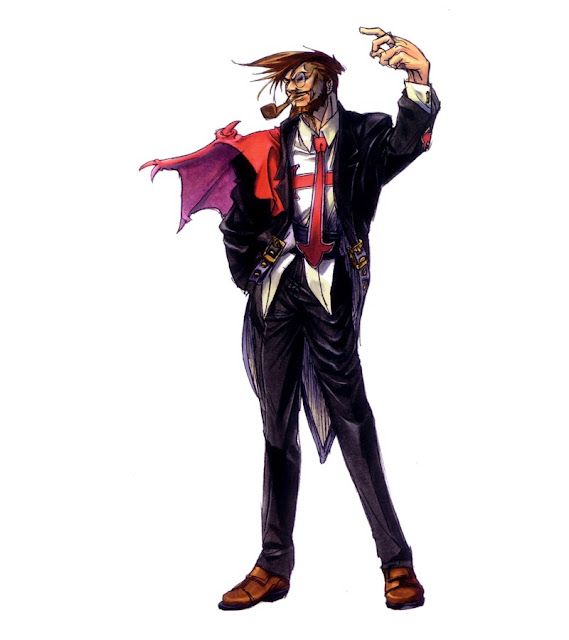 Once again, I'm not going to build any suspense and instead I'll tell you that Slayer is easily my favourite vampire on this list. In the Guilty Gear universe, with all its cataclysmic living weapons and time-travellers and whatnot, Slayer is the strongest of them all because in Guilty Gear-land the vampire's powers run a bit deeper than turning into bats and developing garlic allergies. Slayer is presented as a kindly, almost avuncular figure who likes to pop by every now and then to see how humanity is doing, never fighting at his maximum potential because to unleash his true power would destroy the cosmos or something equally daft.
It's just very difficult to dislike a pipe-smoking, monocle-wearing super-vampire who fights with his fists when all the other characters are carrying swords and giant anchors and, umm, pool cues. Actually, you'd think Slayer would be most worried about facing someone with a pool cue, it's only a quick whittling away from being a stake. Not that Slayer seems to go in for that kind of superstition - he's the only vampire on this list who is enough of a badass to wear a cross on his own chest, and even when he's beaten it only seems to make him mildly disgruntled.

See? Plus, he's named after thrash-metal legends Slayer, despite looking like the exact opposite of someone you'd see at a Slayer gig. He looks more like the kind of guy who listens to lots of obscure "world music" but isn't a pretentious dick about it. Compare this to Demitri, who probably listens to nothing but recordings of girls telling him he's handsome, and I think we can all agree that Slayer wins. 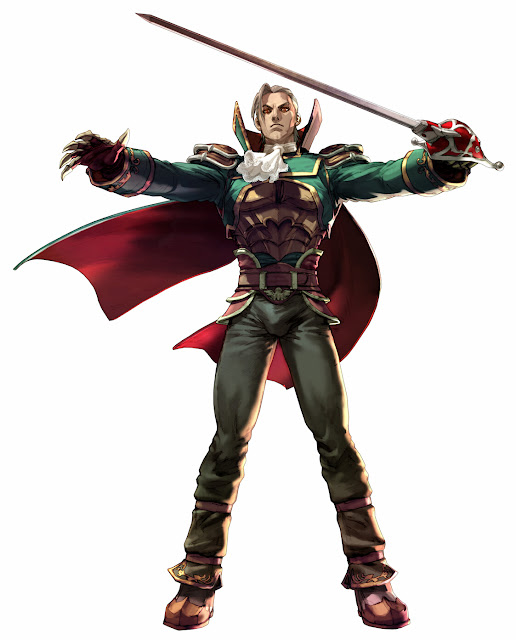 The vampire from Namco's weapon-based fighting game series is an aristocratic, rapier-wielding ponce, but it wasn't always that way. I mean, he was always an aristocratic, rapier-wielding ponce, but when he was first introduced in Soul Calibur 2 was regular human. Then he ended up living on the streets, met a goth girl and was exposed to the malign influence of the evil sword Soul Edge and that somehow made him a vampire. I think. It's never really stated in-game that Raphael is definitely a vampire, but all the signs are there - he lives in a castle in Romania, he has nicknames like Lord of the Night, he's got moves named after vampires, but I think the big clue is that in Soul Calibur 4 he stole his outfit from Castlevania's Alucard. 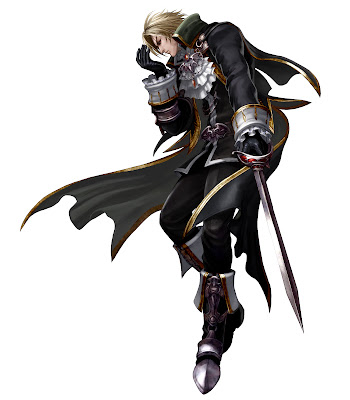 That is not subtle, but then neither is Soul Calibur.
Really, though, Raphael isn't much of a vampire. I'd like to believe that Namco made this French nobleman a vampire to satirise the parasitic nature of the upper classes as they drain the life from the common people, but I think that's giving Namco too much credit and Raphael's conversion to undeadism was just a way for him to keep his good looks while the rest of the Soul Calibur cast age with each new installment. To me, though, Raph will always be that annoying bastard who keeps stabbing me in the foot while shouting "no escape" over and over again. I am not good at Soul Calibur.

Speaking of Castlevania, wasn't there a Castlevania fighting game released for the Wii? No.
Oh, alright, so there was Castlevania Judgment. It was pretty bad. Yes, it had Dracula in and yes, he is a vampire. 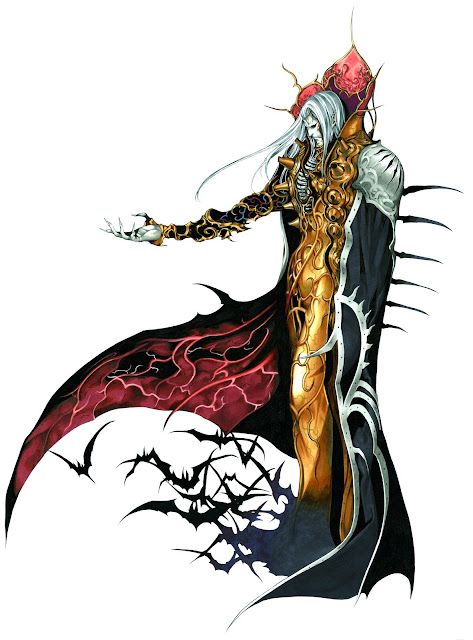 He looks like something from a parallel universe where Gustav Klimt ended up designing monsters for Japanese RPGs. Look at those nozzles all over his chest. I have no idea what comes out of those nozzles, and for this I am thankful.
On the plus side - really the only plus side to Castlevania Judgment - it has a fantastic soundtrack.

I can't remember if there's a sound test mode in Castlevania Judgment, but if there is then that should be the only mode you ever use to play the game. 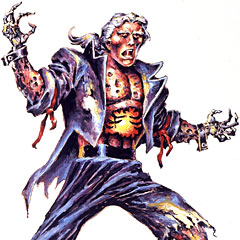 Ah yes, Eternal Champions, the one-on-one fighting game that was supposed to be the Megadrive's answer to Street Fighter 2. Sadly the full question was "can you make a game as good as Street Fighter 2?" and the answer was a resounding "no," but Eternal Champions was still a decent brawler in its own right and definitely one of the best on the Megadrive.
The plot of the game revolved around a being known as the Eternal Champion plucking people from time at the moment of their death. These people were supposedly destined to be pivotal figures in the history of Mankind, so the Eternal Champion gathers them together and makes them fight to the death. Whoever wins gets to live again, all the rest die as they were supposed to no matter what good they would have done had they remained alive. If you ask me, the Eternal Champion has spent too long as an omnipotent figure existing beyond space and time, he's really lost touch with the common man. 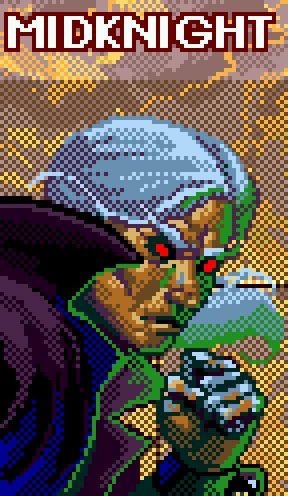 Midknight was originally a scientist working on biological weapons. Long story short, he was infected with his own virus and turned into a vampire, which makes me wonder at the effectiveness of a biological weapon that turns your enemies into immortal creatures with enhanced speed and strength. It's not all good news for Midknight, though - as you can see, the virus also ruined his creamy complexion and left him with a small furnace where his intestines should be. Did I mention he was also a master of Jeet Kune Do, as biochemical scientists often are? That'll come in handy during the life-or-death gladiatorial tournament, then. 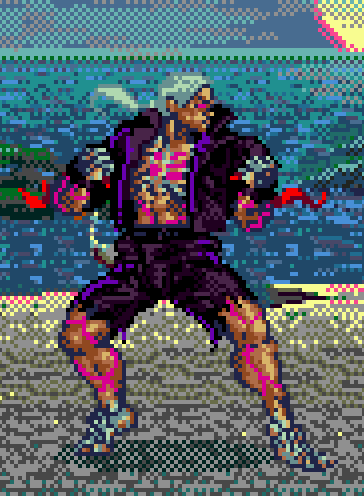 At least he's a nice change of pace from the cultured, aristocratic vampires that make up the bulk of the noggin-smashing Nosferatu. There's certainly nothing cultured about wearing a leather jacket with cycling shorts, and in fact Midknight's entire ensemble leaves me baffled. It's tattered and torn, which makes me think he was wearing it on the fateful day of his lab accident, but there's two problems with that - one, that becoming a science-vampire somehow left him unable to change his clothes, and secondly what kind of scientist wears an outfit like that to do virology research? In the end, we must assume that Midknight chose this outfit himself after becoming a vampire. It's no surprise someone jammed a stake through his heart.

For the final vampire on this list, I've reached deep into the festering pit of barely-playable early 3D fighting games and come up with a real winner - Take 2's Iron and Blood, a sort-of-similar-to-Soul Blade fighter based on the Ravenloft expansions for Dungeons and Dragons. It's a deeply awful mess of a game, almost as bad as Killing Zone, with almost totally unusable controls, completely inappropriate music and gameplay that has all the graceful fluidity of walrus ballroom dancing with a concrete bollard. As it's a D&D title, it also has all kinds of warriors and clerics and skeletons, (including a dwarf called Torgo, for all you MST3K fans out there,) but for this list I'm only interested in one character: the evil vampire lord Strahd. He looks like this. 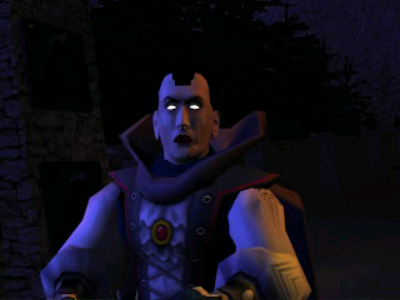 Ah ha ha ha. What could I possibly say that would make Strahd more sinister, more menacing, more soul-chillingly evil than he appears in this screenshot? Well, I could show you his in-game model. 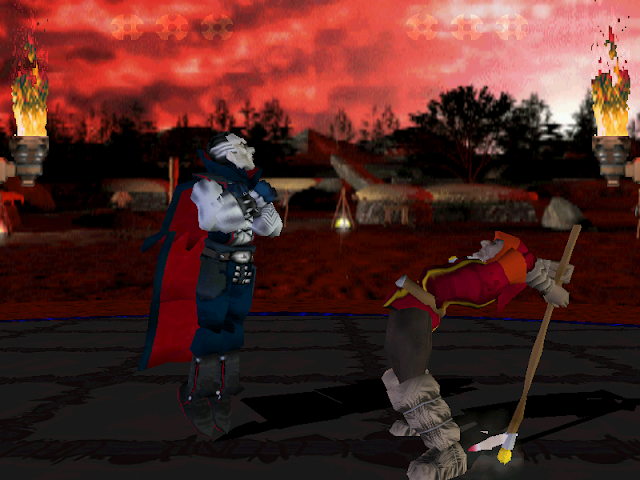 The raw sexual magnetism of Strahd's vampiric power is so strong that this strange hooded man is being inexorably drawn, genitals-first, into Strahd's dark embrace. There is nothing he can do to escape, except maybe to kick Strahd in the feet - my favourite thing about this particular vampire is that despite the fact he's clearly hovering off half a foot off the floor, getting kicked in the feet causes him to fall over as though he was tripped. Actually, no, my favourite thing about Strahd is that he always has his nose thrust snootily into the air. 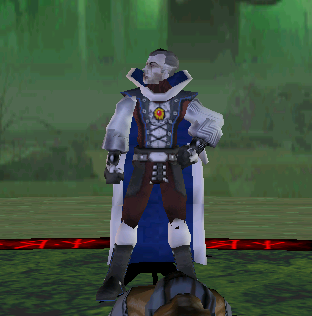 Scratch that last one, it was demoted to "second best Strahd feature" the moment I won a round. To gloat over his enemies, Strahd proclaims that "Your death has served a higher cause. Me!" and that's just so beautifully corny, so thoroughly dripping with cartoonish villainy, that I can't help but utterly adore it. Between that and the hook-handed demon from Zombie Raid telling me that I was for dinner, it's been a good week for that kind of line.
Just to reiterate, though: if you were thinking of playing Iron & Blood, don't. Just... don't, and if you do then I'm sorry for your pain.
I'll end with one final piece of gaming trivia involving Strahd and a much better series of games about vampires. As pointed out in this Tumblr post by NotableGameBox, the artwork for Castlevania II was - how can I say this politely - recycled from the original Ravenloft artwork.

So, Strahd and Dracula are the same vampire, in a way. The wheel of fate turns, the cycle of life goes on, and I come away from this article shocked that Castlevania Judgment wasn't the worst game I mentioned. Now that's spooky.


Recently on VGJUNK:
Gore-soaked lightgun action in Zombie Raid!
NES Frank-bashing in Frankenstein: The Monster Returns!
Like Ghosts'n Goblins but not as good - It's Hobgoblin!
Posted by VGJUNK