As I had so much fun making them the first two times, here are some more mocked-up title screens from licensed NES games that don't exist - and having played some of the Bill & Ted NES game earlier this week I think that's probably for the best. Some of them are even animated, because apparently that's a thing you can do with The Internet these days. Amazing! 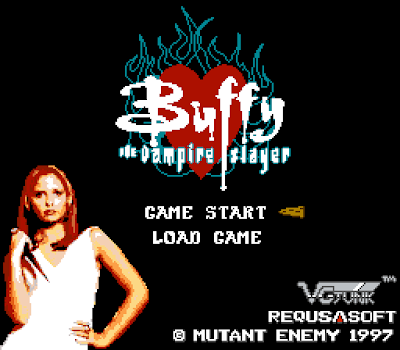 I love Buffy, I really do. One of my favourite ever TV shows, even. I'd probably feel less enamoured with the show if I'd had to play a NES title based on it, though - it would almost certainly have been by someone like Ocean Software, it would have been derivative and stale, it would essentially have been the NES RoboCop games but with a group of pixels vaguely shaped like a teenage girl instead of Detroid's finest. This version would have been much better, of course: think Castlevania 3 with its cast of multiple playable characters and alternate routes through Dracula's castle. Swap Alucard for Willow and clocktowers for gymnasiums and bang, Buffy: the NES Game is ready to roll.

A thought-provoking treatise on consumer culture that just happens to feature Rowdy Roddy Piper killing aliens, They Live could have a been a NES game that made you think as well as tested your reflexes. Something Contra-like, perhaps, with the backgrounds and enemy sprites changing to reveal their true forms once Nada picks up some sunglasses. There's a sub-boss fight against a digitised Keith David that lasts roughly forty-seven minutes, and if you could cram a voice sample of Piper bemoaning his lack of chewing gum into a They Live NES cartridge you'd have something special on your hands.


King of the Hill 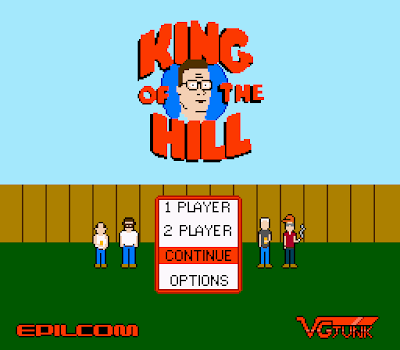 Obviously this could never have been a real NES title screen, because it features drinking and smoking and Nintendo's American censors weren't exactly fans of that kind of thing appearing in their games. Change the beer to soda pop and the cigarette to, I dunno, an oral thermometer or something and you'll be fine.
There's only one thing that comes to mind when planning a King of the Hill game: SimPropane. Use your managerial and sales acumen to progress from a man with a truck and some propane canisters, to regional manager of a propane store, to eventually becoming the biggest supplier of barbeque fuels in the whole of Texas. Imagine Romance of the Three Kingdoms but set in the southern USA and not ancient China and rival propane salesman instead of warring nation-states.

Every British nerd's favourite space-based comedy, (because Hyperdrive was hardly much competition,) Red Dwarf could have spawned a videogame in all sorts of genres. Point-and-click adventure? Elite-style galactic trading simulator with an emphasis on scavenging? Or even a scrolling shoot-em-up, Gradius but with the Vic Viper piloted by an unhygienic Scouser? 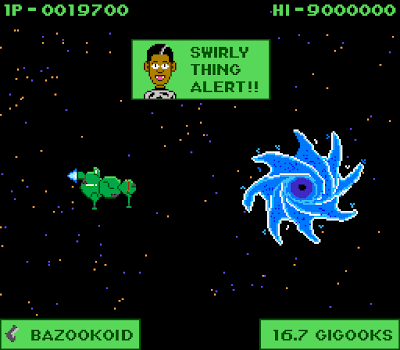 Yeah, let's go with that one. I can only apologise to Danny John-Jules for my inept pixel representation of The Cat, but in my defence I was distracted because I was listening to this the whole time I was working on it.

Of all the potential NES titles featured here, this is the one I would have wanted the most. The idea of playing as Herbert West, a scientific genius who has a lot of trouble with his experiments in re-animating the dead (especially considering he's a genius and all,) is one I can get behind. An action-platformer for this particular film-to-game conversion, I think: West has to run, jump and fight his way through the Miskatonic campus, collecting all the ingredients he needs to make a fresh batch of his re-animating formula. Enemies include zombie cats, zombie dogs, zombie people... pretty much anything you can zombify, really. Oh, and one supremely pissed-off severed head.

To any coulrophobes reading: I'm sorry. Just be comforted in the knowledge that Pennywise A) isn't real and B) isn't actually a clown, thus making him far less terrifying. Stephen King knows how to terrifying people through his books, but could a NES game ever really by scary? Judging by LJN's Friday the 13th game, probably not. I think IT: The NES Game would have worked best as a Shadowgate-type graphic adventure, though - King's text for spooky details married with pixel artwork of Derry and its surroundings might have made for a NES game that was frightening in the intended sense and not because it's Fist of the North Star-levels of concentrated awfulness.

There you are then - games that could have been but never were. Well, except Buffy and King of the Hill because they started well after the NES's heyday. I know some of these aren't technically possible to recreate on an actual NES and its limited hardware but hey - it's my fantasy Re-Animator game and it'll look as fancy as I want it to.

Godfrey Ho is a man of many and varied talents: it's just a shame none of them have to do with filmmaking. He's famous for one thing - making ninja films by splicing footage of western actors in garish ninja costume into pre-existing films and attempting to tie the two halves together through phone-calls, inner monologues and poor dubbing. A Godfrey Ho ninja film is a treasure, a beautiful crystal of laughable acting and fight scenes most LARPers would find wimpy and unconvincing. I tried to make a NES title screen that captures some of this awfulness, but I think I made it too good. Only a ninja can defeat a ninja, and only a terrible NES development team could make a game bad enough to do these films justice.