So, you tend to get three types of videogame commercial on TV these days: straight-up game footage with a tagline, "artistic", high-budget efforts like the Halo campaigns and Nintendo's twee "fun for all the family" clips. Things were different in the early days, though. Advertisers seemed unsure how to translate the charms of this new medium into a thirty-second advert, and more often than not they decided to go weird. Sometimes deeply, bafflingly weird, and as that's always interesting to watch here are a few bizarre and occasionally disturbing videogame commercials.
Apologies for the quality of some of these, but bear in mind they are mostly 20-year old VCR rips that have been uploaded to YouTube.

The Legend of Zelda (NES)
Parents concerned about this new "video games" phenomenon? Want to reassure them that it's a fun, harmless pastime? Why not show a commercial that equates playing Legend of Zelda with completely losing your fucking mind!

That's John Kassir, probably best known to most people as the voice of The Crypt Keeper. In this commercial, he portrays a man whose experiences with the digital land of Hyrule have completely shattered his mind. 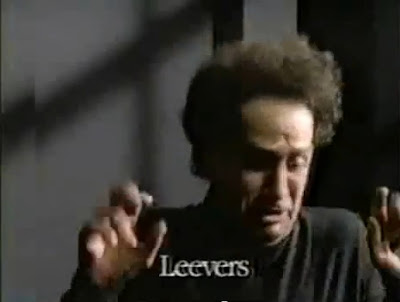 Now all he can do is prance around, shrieking in terror as he recalls the enemies from the game, screaming Zelda's name at the black walls of whatever secure facility he's been incarcerated in. That's the lesson, kids: playing videogames, even joyful fantasy romps like Legend of Zelda, will leave you mentally and physically traumatised. As we shall see, this is not an uncommon theme in videogame advertising.

Atari Jaguar
More tales of captivity and brain problems with this spot promoting the Atari Jaguar.

It might just be me, but it seems that the implication of this commercial is that the only way to get someone to buy an Atari Jaguar is to literally tamper with their brain. You might think you want a brand-new Playstation, but just you wait until we've attached these electrodes to your temporal lobes. 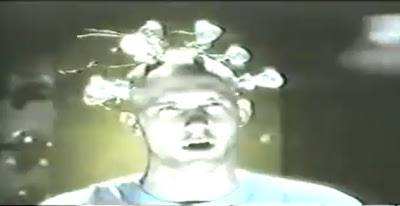 Sega Megadrive "Cyber Razor Cut"
One of the few videogame adverts I actually remember seeing as a child, Sega's "Cyber Razor Cut" campaign is about, um, well, you see, it's about a barber who turns people into robots?

Or possibly he's some kind of futuristic robot mechanic, it's not really made clear. This one's made bizarre by the disparate elements: there's some kind of cyberpunk theme going on, what with the robot parts and all, but then there's a cockney guy singing a song about Megadrive games with some of the most contrived and forced rhymes I've ever heard. "Hitch a lift on a pterodac-bird"? Really? 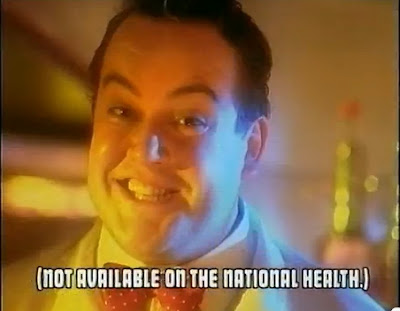 Yes, that is certainly a soothing face that makes me want to buy a Sega games console. Fun fact for any fans of purile British sitcoms (like I am): the Barber is indeed played by Steven O'Donnell, AKA Spudgun from Bottom. It truly is a shame that neither the Sega Megadrive nor Bottom are available on the NHS, but at least the song is catchy.

Sega Game Gear
Do not give old people videogames, because this might happen: 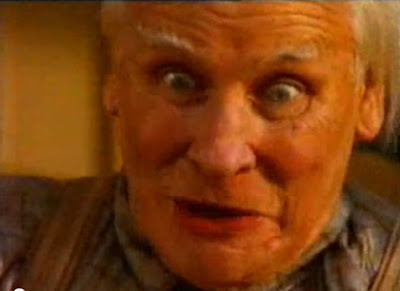 Grandpa gets his arthritic hands on a Game Gear and proceeds to have a freak-out worthy of, well, a five-year-old getting a new console for Christmas.

I think the only "radically bodacious experience" that guy's going to be having in the near future is a huge coronary.
Yet again, this seems like a strange message to put out there - namely, the Game Gear is a handheld your grandad will enjoy, and the excitement will probably kill him. Nice work, Sega.

I have to classify this one as disturbing, because I think it gave me an erection. That's pretty disturbing.

Donkey Kong Country 3 (SNES)
A sultry blonde in tight jeans dances seductively to the jukebox in an American diner. Oh yeah, baby! Why don't you turn around and come over... 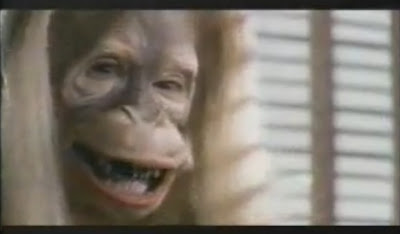 Yes, Nintendo decided that the best way to advertise DK's latest jungle romp was to cause the viewer deep psychosexual trauma. Imagine if you were a young lad and the sight of that sexy woman dancing cause the first stirrings of your sexual awareness. Then she sudden turns around to reveal a face halfway between a trainyard wino and Donatella Versace, and that's the image that seeps into your subconscious and scars your romantic relationships for life. Shocking imagery from the Big N... 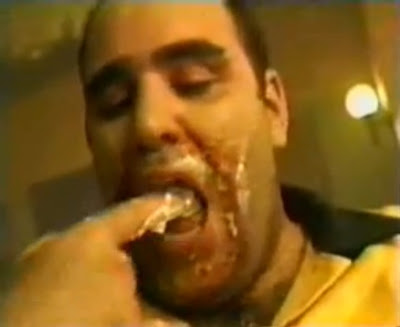 NES
And they keep on coming! 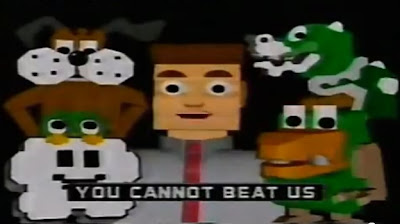 "WE ARE NINTENDO. YOU CANNOT BEAT US. SUBMIT. KILL SEGA FANS. OBEY."

No messing around here, just an advert that flat-out threatens you, although given the amount of Super Mario games I've completed Bowser is writing checks that his blocky ass can't cash. Also, isn't the dog from Duck Hunt on your side? Why would I want to beat him? I mean, everyone who's ever played Duck Hunt wants to beat him, but with a stick or something - not in an actual duck-hunting competition.

Joust (Atari 5200)
And finally for today, something that's less a commercial and more a two-minute trip into a hellish Otherworld. You know Joust, right? The old arcade game where men riding ostriches joust with one another? Well, apparently the Atari version is so incredible that playing it for mere seconds will cause the game's characters to suddenly appear and trash your living room.

By my count it takes roughly fourteen seconds of play before ostrich-knights crash through your floor and begin mortal combat right there on your shag-pile carpet. That is some powerful stuff.
So, the knights do battle for a while, and that's fair enough - the on-screen action spilling into the real world is a pretty standard technique that adverts use to show the raw power of these newfangled games. The bizarre bit is at the end, after one knight is dead and the other leaves. Out the front wall he goes, but not before leaving behind an egg. An egg which, for some unfathomable reason, the Atari-playing tool decides to eat raw. 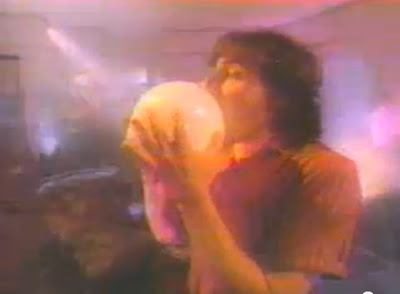 "Oh shit, the egg of a giant mutant ostrich! Just the thing to quell the hunger that gnaws ceaselessly at the core of my being!"
So, he eats the egg, for no real reason other than "this eggs exists". Worse is to come, though, because the egg causes him to undergo a disturbing metamorphosis into a half-man, half-buzzard hybrid. 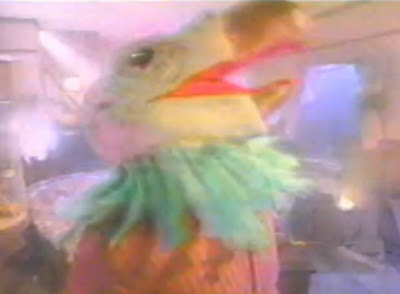 He has no-one to blame but himself, and possibly Atari for creating a game so powerful it can destroy the walls of space and time. He doesn't even transform into a knight - he's a bird now, which I guess means some warrior is going to jump on his back any second and ride him into battle. What the fuck. Still, at least it's not as sexist and immature as most print videogame ads of the nineties were.

And there you have it - videogame commercials used to be even more baffling than they are now. This is an almost bottomless pit of insanity, so there may well be another article on this subject in the future. For now, I'll just remind you about that sexy chimp lady. Pleasant dreams!
(Thanks to everyone who uploaded these videos to YouTube in the first place!)

Recently on VGJUNK:
Suprisingly good toyline-inspired action in Monster in my Pocket!
Punch clowns to save Gotham City in Batman Returns!
Foot-racing, toilet-tinged weirdness in Escape Kids!
Posted by VGJUNK