It's another ephemera article, and you know what that means - five more snippets of gaming history that deserve some time, if not in the spotlight, then at least next to the 40-watt bulb that is my writing.


A Waste of Paper

Here is a page from the Donkey Kong Country instruction manual. 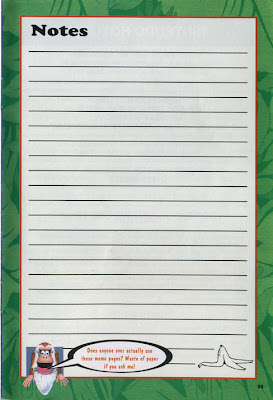 A perfectly normal page from a SNES manual. One of those "Notes" pages, in fact. The spare pages you'd often see at the end of instruction booklets which the developers suggested you use to jot down notes / passwords / a list of those who have wronged you and who will receive swift judgement in the upcoming purges.
But what's that down at the bottom?

Why, it's curmudgeonly primate Cranky Kong, popping up to complain about the waste of paper that is the blank notes page. Well, you'd expect him to be worried about the frivolous use of paper. He does live in a tree, after all. Cranky ponders whether anyone "actually uses these memo pages," and if only a) I still had my old manual for Super Soccer which was packed full of hastily-scribbled passwords and b) Cranky Kong was real, I could finally fulfil my life-long dream of proving a monkey wrong.
While we're on the subject of Cranky Kong, did you know he's supposedly the Donkey Kong from the original arcade game? It makes me wonder if the "Donkey" part of the Donkey Kong name is simply passed down to whichever Kong is currently the strongest, most virile and most likely to kidnap a woman. Alpha Kong, if you will. The other Kongs are assigned names based on their personalities or physical traits, apart from Lanky Kong who somehow avoided bing called "Creepy Kong" despite being an orang-utan clown.


The Robo-Birds of Hong Kong

Pictured above: not Bruce Lee, despite all evidence to the contrary.
It's not Fei Long himself that I'm interested in, though, but his stage. You see, it's got mythical creatures in it.

There's a dragon and some white bird with a pair of legs that just don't look quite right. I think it's that the knees are bending the wrong way, although I can't really say they're bending the "wrong" way because that's obviously not a real type of bird and who am I to say how the legs of a mythological bird ought to work? I will, however, ponder on just what these creatures are supposed to be. Surely that's not honest-to-god dragon over there? That seems too out-there even for the Street Fighter franchise, and when you consider it's a franchise starring a military dictator who exercises his authority by setting himself on fire with his mind and launching himself at people like a torpedo that's really saying something. My best guess is that, being a movie star, Fei Long's stage is a movie set and those are animatronics. That would at least explain the strange robotic noise they make. It's an indescribable sound. Kinda like "QKROOWWWOWWQQ". Told you it was indescribable.

Metal might be down there with polka and smooth jazz versions of pop classics you hear when you're on hold as one of the less cool musical genres, but I still like it. I also like really fast racing games starring intergalactic bounty hunters and intelligent monkeys called Billy, so imagine my delight the first time I booted up F-Zero X to be greeted with this riff over the Nintendo 64 logo.

Not that the rest of the soundtrack isn't great, because it really is, but that four-second riff lets you know that Nintendo have thrown any sense of restraint and decorum out of the window and it's you, the player, who will benefit as you blast around the courses at insane speeds only to be nudged to your death by dinosaur-man called Bio Rex.


The Haunted Eyes of an Opposum

In Konami's Rocket Knight Adventures you play as Sparkster, a brave knight with a sword, a jetpack and a prehensile tail. Oh yeah, Sparkster's an opossum, by the way. Well, it was bound to happen eventually, all the other animals have been used as platform heroes by now. That's why the era of the mascot platformer came to an end, there were no animals left to fill with "attitude" and send on princess-rescuing missions.

Sparkster is a jolly sort, heading into battle with a smile on his snout and a song in his heart. Until he hangs from a tree branch by his tail, that is.

Suddenly the dark acts acts he has committed return to haunt him, memories of his dreadful past causing him to stare blankly in the middle distance as he wonders how it all came to this. It's even funnier if you flip it upside-down!

Looking again at Sparkster's pained expression, I have to wonder whether that's actually his tail he's dangling from.

Shadowgate is a point-and-click adventure game, and as such it has all the familiar options available to help you traverse the castle and defeat the evil warlock. You can LOOK at things and OPEN doors and USE inventory items and who knows, doing those things might not kill you instantly. It usually does does kill you instantly, though. Shadowgate also has a less common option called SELF, which lets you do things to your own body. Things like use the HIT command to punch yourself in the mouth, a remarkably apt metaphor for trying to play Shadowgate without a guide. It gets "better" when you find a weapon, because then you can USE weapon on SELF to commit suicide whenever you like!

This GIF does not include the third page of text which simply reads "You bloody idiot." Also, good work thrusting a hammer into your chest, that must have taken some real effort.
That's pretty graphic for a NES game. Not graphic in the sense that you actually see anything, but even a text description of someone gorily taking their own life feels remarkably dark for a NES title. I think the reason that the developers got away with it is that they leavened this grimness with some of the more amusing messages that come up for other item-self interactions, like my absolute favourite - using a broom on yourself.