Hey, kids! Have you always wanted to make your own cartoons but lacked the funding, artistic talent and scores of Korean animators necessary to make your dream come true? Well, offer up a blood sacrifice in praise of Novotrade and Konami, because they've brought the tedious and time-consuming world of animation to the NES with their 1992 mildly-diverting-sprite-manipulation-em-up Tiny Toon Adventures Cartoon Workshop! 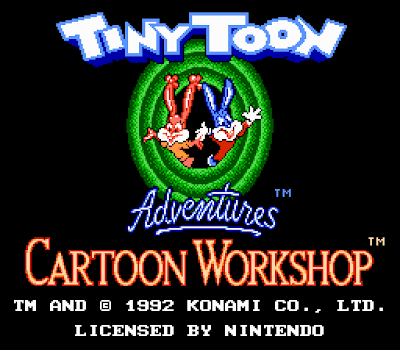 Yes, you too can use moving images to bring forth the warped imaginings that lurk in the twisted labryinth of your mind, as long as those imaginings revolve around around the wacky hi-jinks and famous characters found in Warner Brothers' Tiny Toon Adventures cartoon. 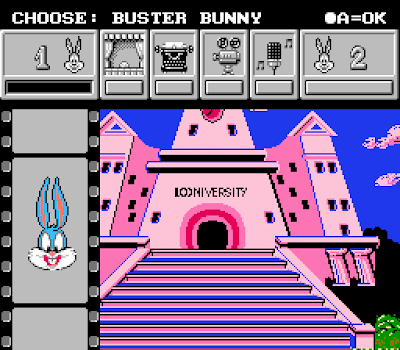 If you don't remember Tiny Toons, it was Warner's early-Nineties attempt to make the Looney Tunes relevant once more by creating younger versions of the established Looney Tunes cast, giving them different names and sending them to "Acme Looniversity" where they learned about, I dunno, clowning and wise-cracks and the grim reality of student debt in a world where a first-class degree in Applied Slapstick no longer guarantees you a job. 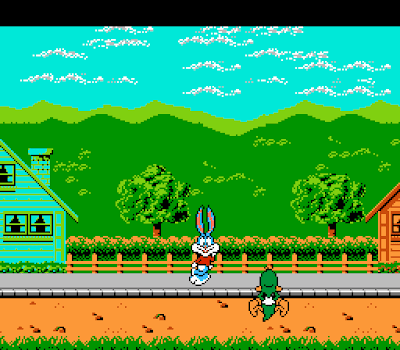 Bugs Bunny, Daffy Duck and the rest of the famous Warner characters appeared in Tiny Toons as the Looniversity's professors, but the bulk of show was dedicated to the next generation. The stars of this new wave were Buster and Babs Bunny, two rabbits inspired by Bugs, and Plucky Duck. Plucky is Daffy Duck, but green. All the popular Looney Tunes stars get younger but otherwise very similar analogues, except Elmer Fudd, who became a small girl who terrorises animals through excess affection. I suppose portraying him as a kid with a gun who repeatedly tried to kill the main characters in a school setting would be a little beyond the pale.
I always wondered what the hell the genesis of this new breed was supposed to be. Are they the children of the original characters? Are all the animals in the Warner universe fated to conform to a certain set of traits on a per-species basis, a universe where every rabbit is a smart-mouthed prick and all ducks are ranting semi-psychotics? Do they each represent an unchanging aspect of the cosmos, rabbits being an embodiment of the "trickster" archetype as portrayed by the likes of Br'er Rabbit and Bugs himself? I don't know, but I'm sure there are people on the internet who have spent an inordinate amount of time trying to figure it out. 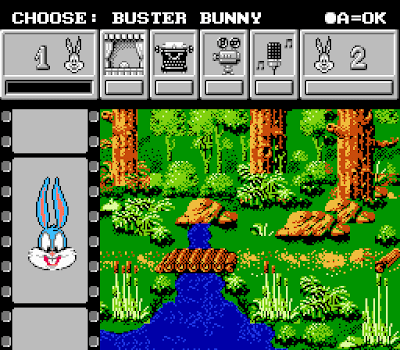 Never mind that, though - we're here to create cartoons, and Tiny Toon Adventures Cartoon Workshop makes it easy! For once I'm not being sarcastic, either - Novotrade really did manage to cram an effective if extremely limited animation engine onto an NES cart.
Here's how it works: everything is controlled by the icons across the top of the screen. The left- and right-most icons let you select the "actors" - that is, the two characters you can have on screen at once. Each character has a few set animations, like running or swimming or, in Plucky Duck's case, whatever obscene act this is motion supposed to represent.

Oh god, I'm not sure what's going on here but there's no way it's suitable for consumption by minors. Just look at Plucky's eyes, it's all become too much for him and he's fallen into a catatonic state.
So anyway, you pick the animation you want to to use, be it Calamity Coyote flying around on an Acme-brand rocket, Babs Bunny firing a water pistol or Plucky doing... that, and you place them on the background. An extendable arrow allows you to make the characters move, so creating something like Buster walking across the screen is very easy to do. 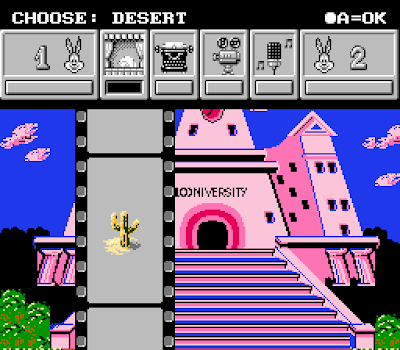 The second icon from the left lets you select a background. There are two types of backdrop: solid colours and famous Tiny Toons locations like the Looniversity and, erm, some generic forest / desert / lake areas. The solid colours are useful if you're going for a more symbolic approach: for example, a flat black background can really highlight Furrball's descent into existential despair. Mostly you'll be using the scenery, though. 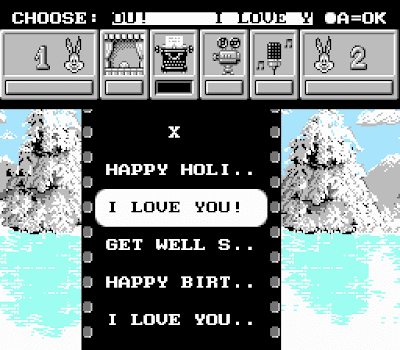 The typewriter icon allows you to place captions into your animation, although it's hamstrung by the fact you can't enter any message you like, meaning my grand vision of the cast of Tiny Toons performing an 8-bit version of Hamlet will have to go unrealised. 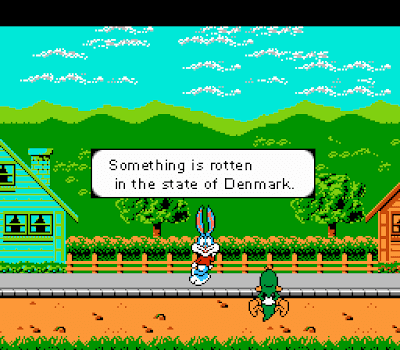 It would have looked something like that (Plucky Duck is playing the role of the ghost, you see. He's in the middle of exeunt-ing.)
A lot of the available captions are very specific or tied directly to one character or scenario and are thus of limited use, but there are some more general phrases like "The End" or "Happy Birthday" or even "I love you dad!" which does nothing but conjure images of a small child slaving over a deeply personal animation designed to show their pure and abiding affection for their father, only for said parent to not even look up from the betting pages to watch their child's digital labour of love, the offering dismissed with an irritated grunt. That's what you get here at VGJunk, folks - bad jokes and unresolved father issues. Don't forget to tip your waitress. 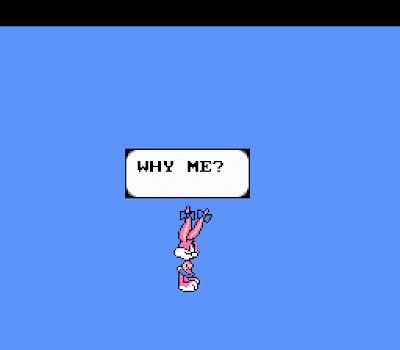 The other two options are the camera, which lets you move through the animation frame by frame and insert things precisely where you want them. Helpful, but unglamourous. The other one, the one second from right, is where you insert music and sound effects chosen from a very small library of samples. Frankly, I forgot the audio option was even available and thus all my animations played out in total silence. I'm going to pass it off as a pretentious stylistic choice, because now that I'm a movie director I get to do things like that.
All these options come together in an impressively intuitive if not very malleable way - it's easy to make an animation, but nigh-impossible to construct something that isn't forced upon you by the limited choice of sprites at your disposal. Still, I struggled past these limitations and now I can present to you VGJunk's directorial debut. I call it The Coyote's Howl, or Toons Inhumanity to Toon.

The dangerously psychotic Calamity Coyote detonates a bomb strapped to an unsuspecting member of the public, his attempt to gain revenge on an uncaring society that he blames for his inability to catch that blasted roadrunner. He proudly informs the viewer that he "meant to do it," further reinforcing the depths of his psychosis. Clearly, this is a searing and enlightening look into the heart of madness. It's Taxi Driver for the "emotionally stunted man-child" demographic, and I expect my Palme d'Or is in the post already.

I thought I'd try some family-friendly comedy fun for my next effort. A rabbit rollerskating on a lake! What could be funnier than that? Nothing, except maybe a duck attempting to copy the rabbit and drowning. Because, you see, as waterfowl the very idea of a duck being unable to swim is intrinsically humourous! That's what's happening in the second bit, by the way. I know, it gets a little hard to follow. Let's just chalk it up to Dadaist absurdity rather than the meagre library of animations that Tiny Toon Adventures Cartoon Workshop provides you with.

I thought I'd get on the remake bandwagon, and taking my inspiration from such pointless exercises as Gus Van Sant's version of Psycho I decide to recreate the opening scene from Castlevania with Plucky Duck cast in the Simon Belmont role. Of course, I bollocksed it up because Simon Belmont doesn't actually walk towards the castle in the Castlevania opening. My 8-bit dork cred is in tatters. I'm going to quit the film-making business and do something more socially beneficial, like rounding up lost shopping trolleys or donating all my organs to science.

Oh, okay then, one more. In The Thorns of Passion, Babs Bunny's mind is so addled by the fierce desert heat that she confesses her love to a saguaro cactus. Happily the cactus is totally into that kind of thing and they both live happily ever after, or at least until they tried to consummate their relationship.
I hope you enjoyed those animated GIFs based on animations made with an NES animation program spun off from an animated series, but I've just about reached the extremes of what I can do (or what I'm willing to spend time doing) with Tiny Toon Adventures Cartoon Workshop. 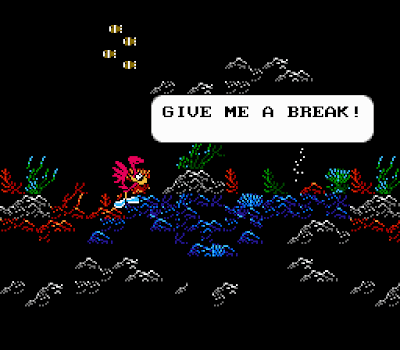 TTACW is ultimately both impressive and disappointing. The fact that someone managed to cram a simple-to-use, intuitive animation utility into a NES cartridge is no small achievement, but the lack of options mean there's not really much you can do with it. The small pool of available sprites is unfortunate but understandable, but the inability to enter your own text is a real kicker. There's also no way to save your animations, short of hooking up a VCR and recording them to tape. I hope this means that somewhere out there there's a four-hour longplay video cassette filled with nothing but some kid's TTACW creations. I'm not sure why, but that's a pleasant thought. 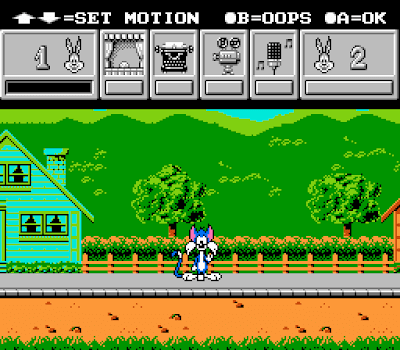 Tiny Toon Adventures Cartoon Workshop, then. A fun tool to mess about with for a while, not great at recreating classic moments from famous Konami franchises. If you want to make your own Tiny Toons animations and send them in, I'd be happy to see them.
Oh, and in case you were still wondering, that Plucky Duck animation? The yellow bits at the bottom are not, as I originally saw them, Plucky's spread-eagled feet with some fleshy, spinning mound between them. They're the edge of a boat. He's rowing really fast. I'm sure you're as glad as I am that's resolved.